“Eating Out of the Drain: Chris Lux & Dane Johnson” at the Popular Workshop

Every song Depeche Mode has ever made is about at least one of the following ideas: sex with pain is fun, piety is overrated, morals are ambiguous, inter-personal power dynamics are worth contemplation, and you can find the sublime in gritty places. Chris Lux’s dissection of the influence on, and meaning in, Depeche Mode’s “Halo” video from the 1990 album “Violator,” is a huge painting that pulls an inordinate amount of attention in the Popular Workshop’s “Eating Out of the Drain: Chris Lux & Dane Johnson” show. Studies for “Halo” sandwich the painting, citing Balthus (complicated sexuality) and Ingmar Bergman (faith). These are combined into the painting, where a man in Depeche Mode songwriter Marin Gore’s clown makeup hovers over a reclining woman under a carney wagon. The painting is sexually tense, but the music video’s other themes, and Lux’s interpretations, don’t come through. It’s an instance where content is more interesting than form, especially for people who share Lux’s taste in popular culture.

Lux’s other paintings are drastically different, of cartoonish animals and people that interact and flow together in black and white. Covering the legs and tops of tables, the vignettes of characters were inspired by Sir John Sloan’s collection of scientific specimens, but look like Bosh’s “Garden of Earthly Delights;” there’s a range of morality and sexuality, and lots of knowingly naughty expressions. Illustrations by Lux for his interpretation of Jacobus de Voragine’s “The Golden Legend” with William Rockwell, titled “Twelve Saints,” are tacked against fresh, golden plywood, which emphasizes how luxurious the laid paper’s creamy-ness and the gouache’s velvety blackness; these paintings would never show as well on a white wall. The fluidity of Lux’s style lends itself well to cleverly showing multiple moments of Rockwell’s story in a single image. Penises are everywhere. 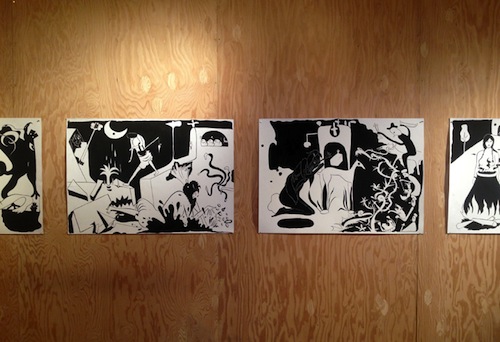 Dane Johnson’s work also uses appropriated pop culture, but it reflects a masculine character, the kind who prefers Guns N’ Roses to Depeche Mode. A cut-out print of a panther and fantastically tactile purple-tinted photo of velvet surrounded by a gold border are EXACTLY what a GNR-type of guy would consider sensual. Even sexier, “Untitled” is a diptych of shelves filled with a lifetime’s supply of gay porn DVDs “White Guys Taking Black Cocks” and “The Monstercock Max de Long Experience 2”; these are real films, (too bad! Max de Long would make pseudonym for Johnson that could compete with Duchamp’s Rrose Sélavy), and really disappointing (pan-flute synths, Max isn’t that impressive). The textures, (plastic, velvet, exotic animal), and colors (black, gold, purple), of half of Johnson’s exhibited work would be described as “classy” by the sort of people who use the term “classy.” It makes you wonder if Johnson is joking, and serve as a foil to the flat and cheap source material he uses in his collages.

Basketball players mid-dunk and football hulks are cut out of colored newsprint and attached to white paper. If Johnson had two copies of the same paper, he doubled the sports stars. The color newsprint works are as dude-ly as the sensual works, but they’re more precious—these are things a person wants or venerates. A small photograph of huge speakers looks an awful lot like the World Trade Center towers. A fashion-blogger style vision board includes guns, watches, weights, track pants, and a switchblade. Some of the isolated images are tender, now that they’ve been isolated from their context, but they’re mostly a reminder that we surround ourselves with junk and images of it. Johnson’s best work is the most obviously personal: a mini tape cassette labeled as his psychic reading. It’s the only appropriated object of the bunch you’d want to save for the rest of your life.

“Eating Out of the Drain: Chris Lux & Dane Johnson” is on view at the Popular Workshop through November 17. 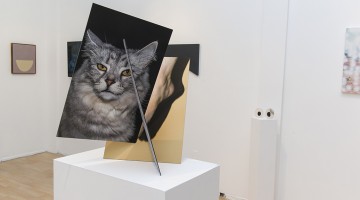 A selection of openings, San Francisco

Postcards…from the Museum of Gas, Chris Lux at Int