If you have come to Peres Projects, Berlin to see a show by artist Mark Flood you might think you made a mistake when you realize the exhibition on display is ”Mike Lood – Ask Officer Pepperspray”. But rest assured, you have come to the right place. “Mike Lood” is Mark Flood’s new pseudonym for this show and the title should prepare you for what is to come: Things are not quite what they should be. 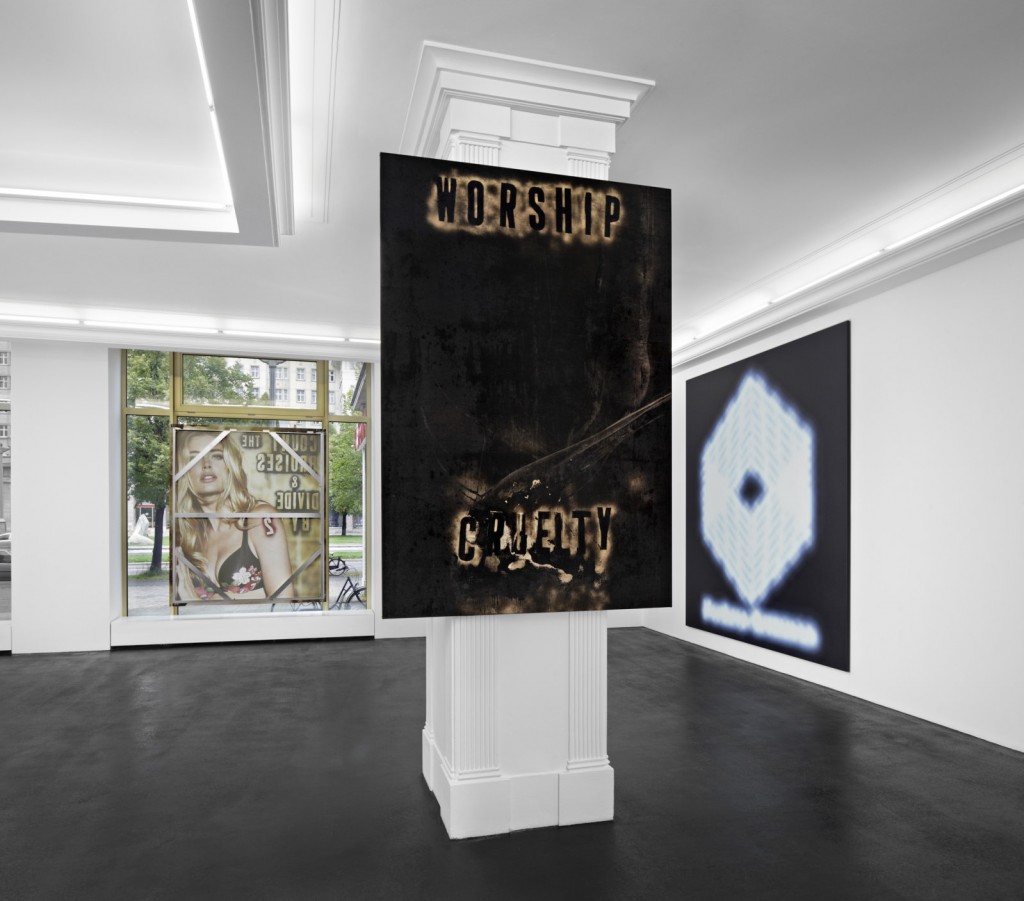 Punk rock, mass media, and anarchism are Flood’s inspiration and fuel and his caustic treatment of American popular culture has been an inspiration for young artists for decades. The Houston based artist and musician is best known for his subversion of mass media messages, for art that is angry, violent and antagonistic. The name of his 70s punk band “Culturcide” is also the philosophy behind his work.

In his 5th solo exhibition with Peres Projects he shows new large scale work from his series of muted advertisements alongside new lace paintings, previously unseen logo prints and sculptures. Here the readymade is alive and well, American popular culture is not. You will find things that may look familiar but now deliver an unfamiliar message. All directives are being redirected. Words are misspelled, blacked out, changed. Welcome to a surreal universe of American mass media exposed.

Just like with his pseudonym Mike Lood, letters seem to have gone missing or are jumbled. Words have been added, removed, changed. Adverts are “muted”, their messages silenced by blacking out the words. Signs have been defaced, mutilated, their directives consciously changed or misspelled. An iPhone advert displaying the date of “Dad’s birthday” reads “remind me I’m dead”, a message that not only plays with the spelling of “dad”, but is also a comment on the absurd extent to which we allow digital devices to manage our lives. 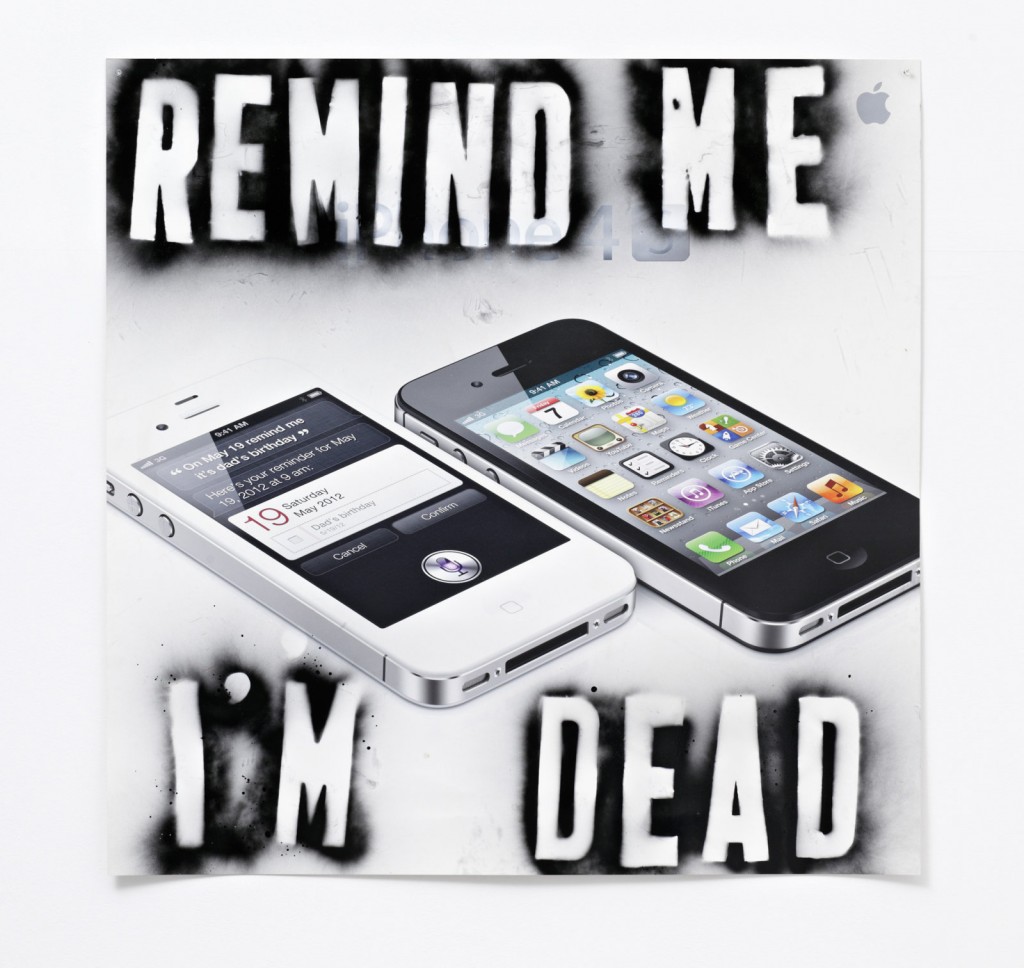 The M&M candyman near the gallery entrance greets the visitor with the spray painted invitation to “eat pusy”. There are several other sculptures that are both hilariously playful and deeply troubling, like two appropriated michelin promotional figures in the window titled “The Devils” or the “Fuck Me Burger” lying on the ground in the middle of the gallery.

New large prints on canvas with washed out images of corporate icons take on contemporary big shots from Goldman Sachs to Apple, blowing up their logos beyond printability, abstracting them through the printing process and almost fading them into oblivion. Right next to the icon prints there are large scale acrylic paintings that carry crudely spray painted and disturbing instructions to “Worship Violence” or “Disable Your Conscience”. 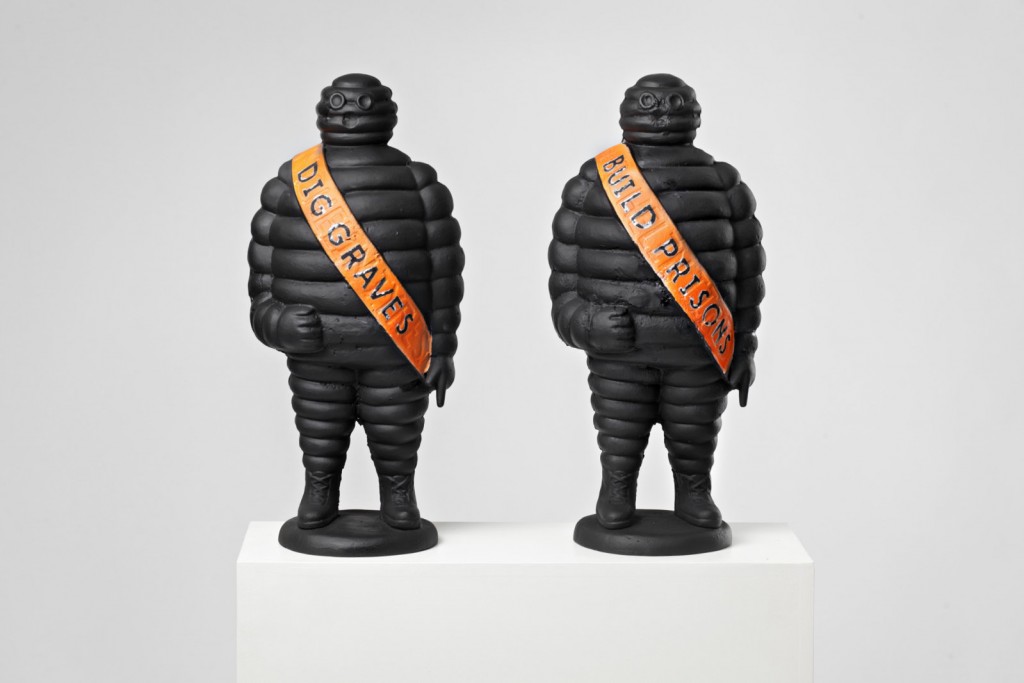 In this body of work that ferociously criticizes the brainwashing mechanics of mass media, the lace paintings stand out. There are no angry instructions, no words, no icons. There is no irony or visible critique. With titles like “Summer Lawn” or “Romantic Pool” they stand in stark contrast to the other pieces in this show. These formally beautiful and delicate pieces not only please the eye but also emphasize the crudeness and violence of Flood’s angry work. Inspired by David Hickey Flood decided in the 90s to start making beautiful art. Using torn heirloom lace soaked in paint he creates intricate patterns on canvas. While Flood himself states that he is not interested in lace and its connotations, they may be his commercially most successful product. 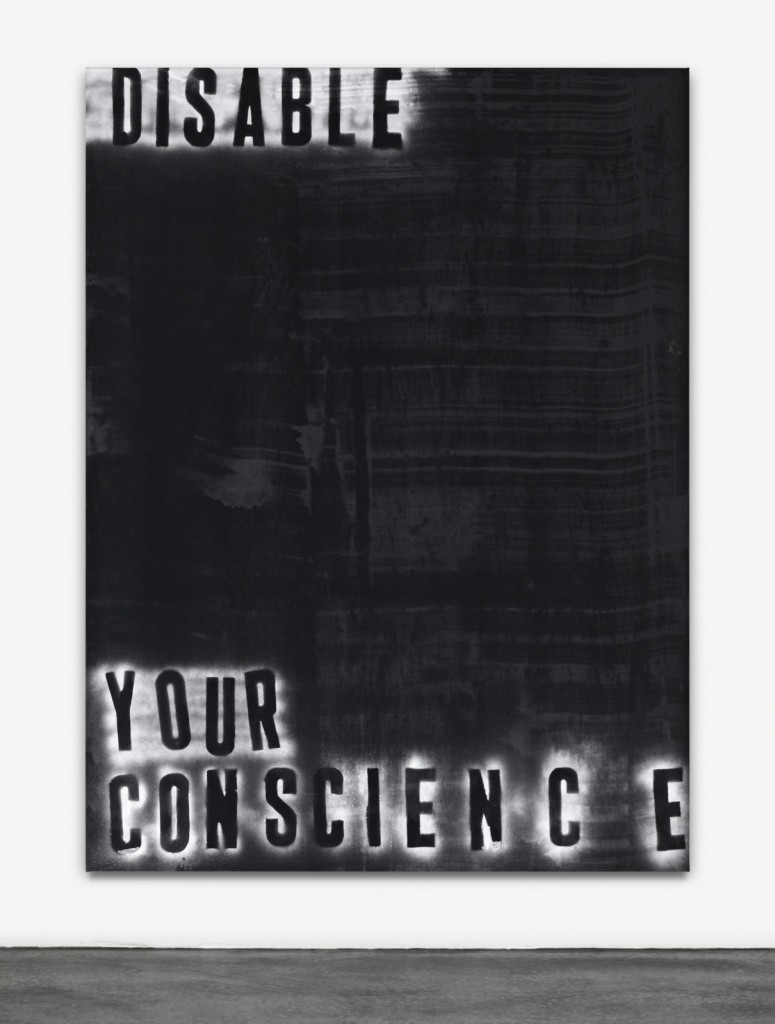 Disable Your Conscience, 2013. Painting – Acrylic on canvas. Courtesy of the gallery. 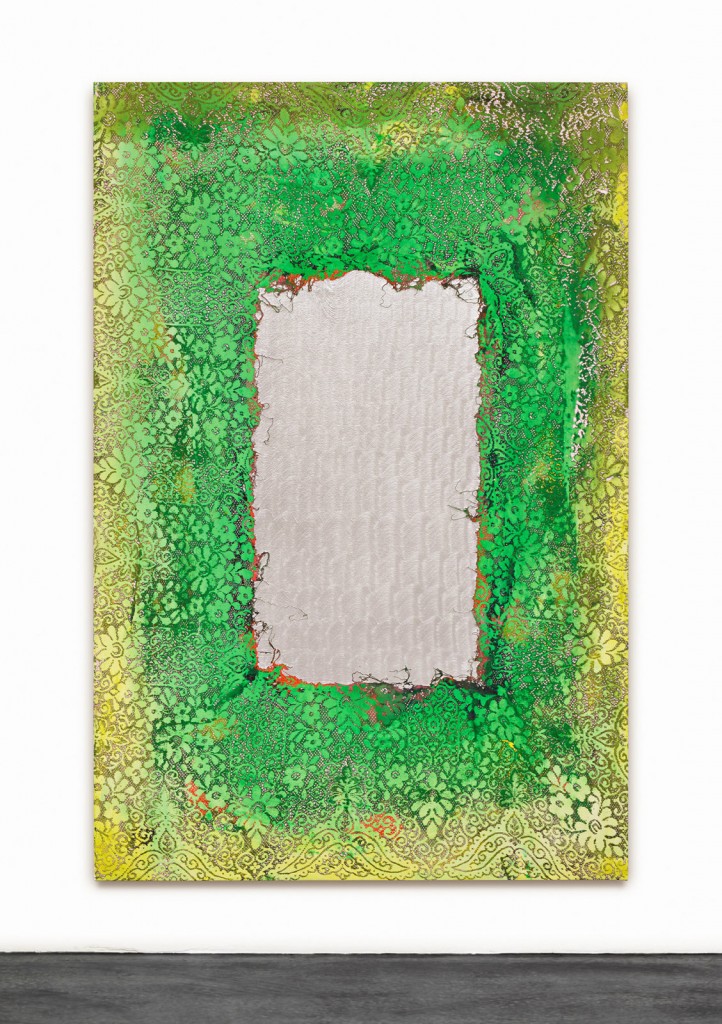 Summer lawn, 2013. Painting – Acrylic on canvas. Courtesy of the gallery.

To this many layered show, the historical surroundings of the space add yet another level of irony to Flood’s subversion of American pop culture. The gallery is situated in an impressive Stalinist Gothic building in Berlin’s former East, massive skyscrapers in Soviet Empire Style as far as the eye can see. Next to a drugstore you will see a window displaying a Victoria’s Secret ad that tells you to “count the bruises and devide by 2”.  Welcome to the world of Mike Lood.

Previous post SFAQ Pick: "I am He who Buries the Gods in Gold and Gems" solo exhibition by Fredrik Söderberg at Galleri Riis in Oslo, Norway.