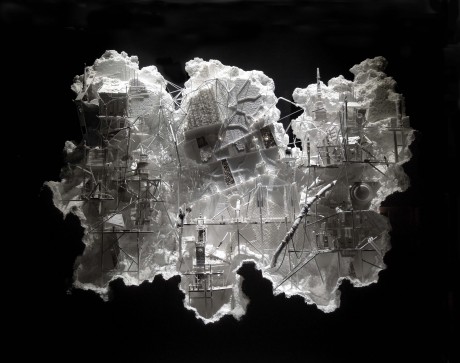 Berlin still seems to be in flux more than 20 years after reunification. Hot, hip and new galleries clusters emerge every few months, with galleries and project spaces going in and out of existence often before their third show. However, a few areas have remained immune to the hype, mainly residential areas in the former West that are too established, safe or boring to become hip.

Geoff Stern Art Space is situated in one of those areas, near a big post office and across from a big cemetery in the conservative part of Berlin-Kreuzberg. Here the artist Geoff Stern has set up his studio and last year he decided to make use of the Japanese tea garden in the courtyard and to show art there. Art that he liked and that should complement the lovingly tended yard.

What started out as a two window show with openings that were attended by no more than a handful of people has quickly become an insider tip and Peccato DiVino, the Italian bar next door where the opening receptions are held, now is hardly big enough to accommodate all the visitors. What sets this space apart from most of the innumerable other project spaces in Berlin is that the quality of the work is consistently high. The focus is on quality rather than quantity, so sometimes only two pieces are on display, carefully chosen to interact with the setting in an advantageous way. The artists are chosen purely on merit, not on their exhibition history or academic credentials. Geoff Stern mainly shows three dimensional works and experimental films or animations in the basement of the reception bar during the private view. Currently on display are works by four artists and even though there is no reference to Christmas, the show feels very seasonal, especially after dark, which at this time of year is after 4pm.

The first thing you see upon entering the courtyard is the neon art on the far end of the garden that tells us to “believe”, an ambiguous request given that LIE is highlighted as the word’s central element.  This work by emerging artist Cherry Goldenberg was a chance discovery at the neon sign shop where it had been manufactured.

Take a walk around the pond in the center of the garden to get a long view of the two illuminated windows on the other side, each featuring a three dimensional piece. The window to the left contains a Winter Wonderland like a shop window dressed for the season. But get closer and discover it is made of styrofoam and everyday objects. This work by Nandor Angstenberger despite having all the magic of a Christmas scene remains abstract and beautiful. The absence of seasonal kitsch is particularly impressive if you have just visited a German Christmas market. The tower of polished granite stones in the window to the right seems to play with the Japanese tea garden theme and if you stopped in to find repose it may remind you of a kind of minimal spirituality that has completely gotten lost in mainstream Holiday celebrations. In this setting the “Wishing Stone” piles come to mind that are common in Asia and the fact that Markus Wüste collects these stones himself from the alps only adds to the meditative aura of the piece. 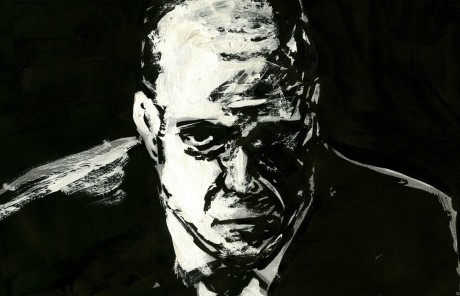 In the reception bar Uros Djurovic’s animation “Hey Good Looking” was screened at the opening view, an experimental piece that again seems to reference the spirit of gift giving. Of course with a twist. Unfortunately this work could only be seen during the opening, but if you missed the screening you can request to see the animation by sending an email to the curator.