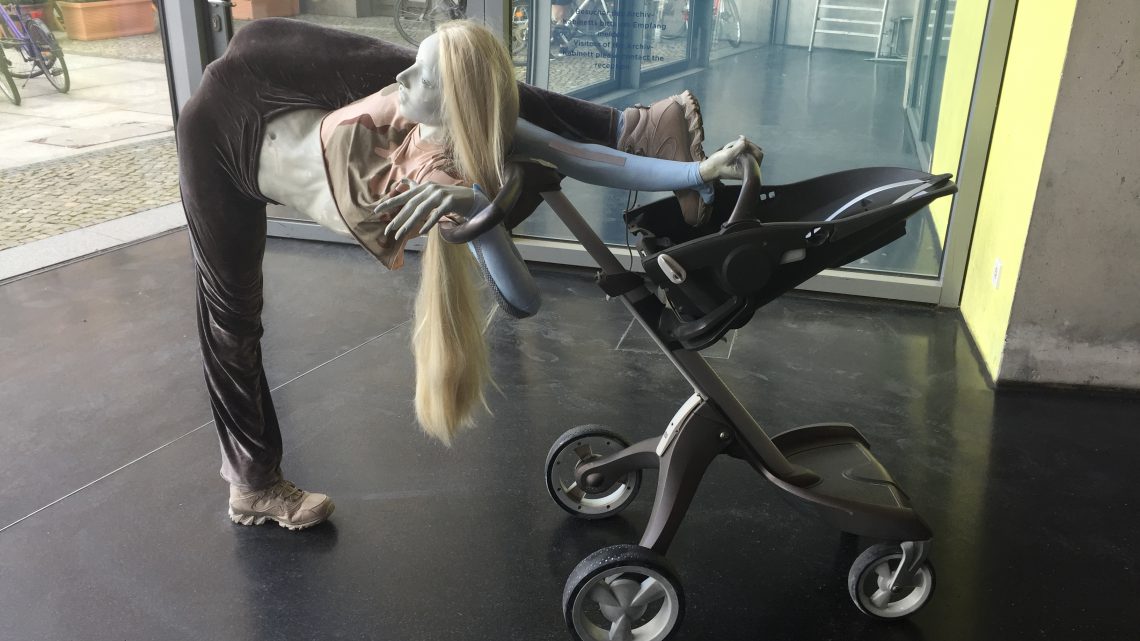 Offering inoffensive slick surface in place of a political message and smooth fashion aesthetic instead of character is a statement in itself. This shopping mall style Berlin Biennale shows the present state of Post-Internet art. 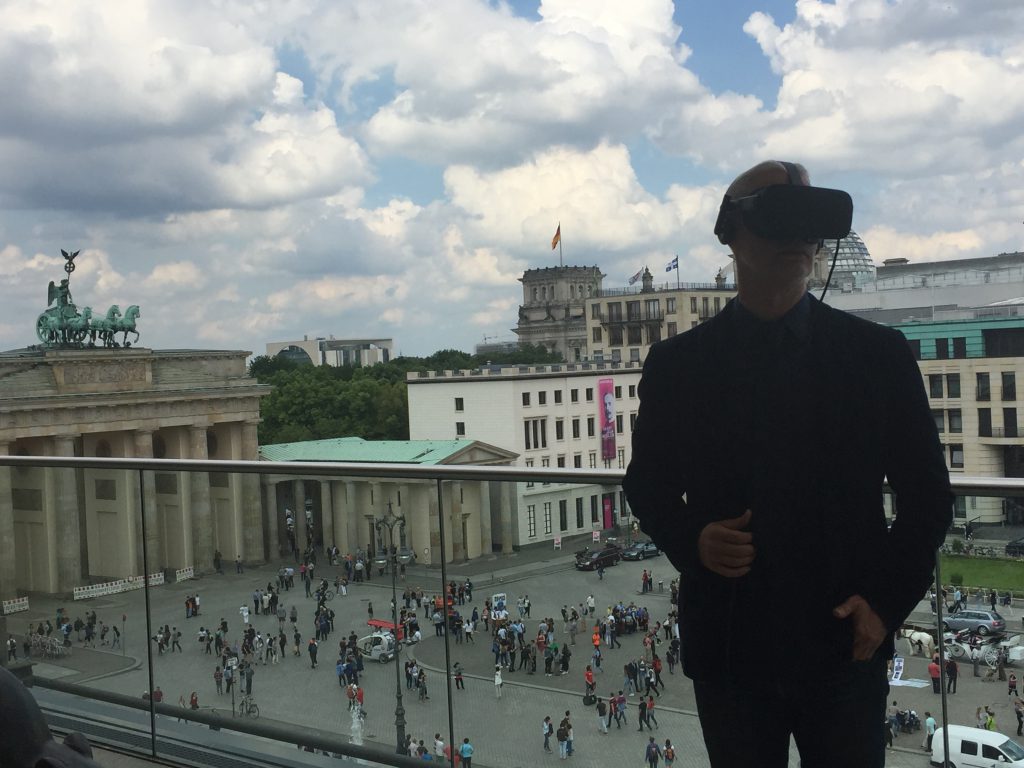 The 9th Berlin Biennale curated by DIS and entitled “The Present in Drag” is all about looks and no Berlin Biennale has ever looked slicker. It is the biggest celebration of Post-Internet art to date, certainly in Berlin, maybe worldwide. It may well also be the most aesthetically homogenous in the history of biennales. The DIS brand is omnipresent, it feels like the participating artists are mere extensions of the curatorial team. Using a fashion photography aesthetic, large scale images, screens (and more screens), video, lightboxes and VR goggles they present a speculative present, a contemporaneity that is more present than the present, that is “post-contemporary”. The present is a scary place and here is an attempt to “materialize the virtual as the real, nations as brands, people as data, culture as capital, wellness as politics, happiness as GDP, and so on.”

DIS stated at the press conference how they moved to Berlin a year and a half ago to immerse themselves in Berlin life, and they did not find much left of the old abandoned buildings and underground art Berlin used to be famous for. Instead they found gyms, wellness centers and shopping malls.

So, where previous curators picked picturesque Berlin locations for their venues from the days of industrial glory, anarchy, punk rock and structural decay, DIS chose places imbued with political and historical meaning that contribute a contemporary “paradessence” (paradox + essence) to the show. The target audience is the art-minded tourist, “the signature collector and purveyor of contemporary experience” (from the biennale’s website) and indeed, the whole event is reminiscent of the tourist experience, with modular pricing, choice of events and merchandise, and airport terminal style adverts in all sizes and shapes (not to mention the optional boat ride). 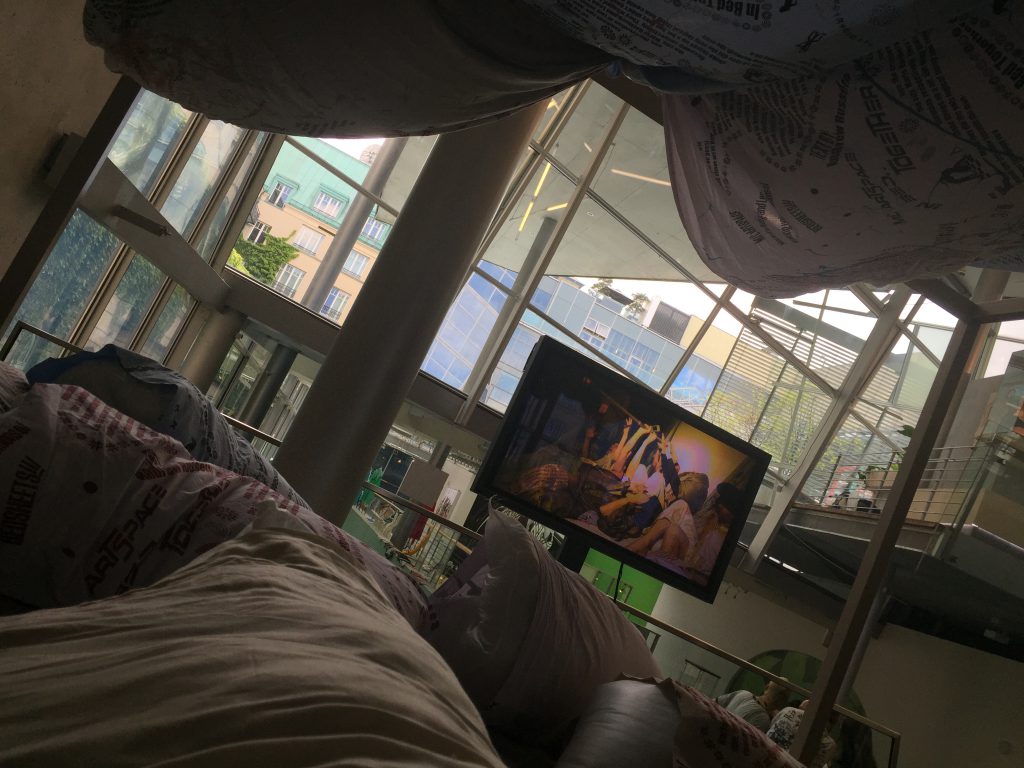 In keeping with the Post-Internet theme, the various locations and artworks are linked in hypertext fashion, but come prepared for a pre-contemporary tour. For, instead of being taken to a teleportal or being given a hoverboard, there is a paper map and information on public transport. We apparently have yet to overcome the analog schlepp.

And beware; the paper map is not the only thing analog. More than one person fell into the very real waters that flood the ground floor of KW Institute for Contemporary Art, one of the main venues. The watery video installation What the Heart Wants (2016) by Cécile B. Evans is one of the most enjoyable experiences in this Biennale, exploring emotion in the age of machines, so it is worth taking the risk. KW also boasts a new bathroom cum communication hub (Public Intimacy, by Shawn Maximo) which is a major improvement over the previous one, even if you do not wish to “blur[…] the boundaries between the private and the public sphere.” 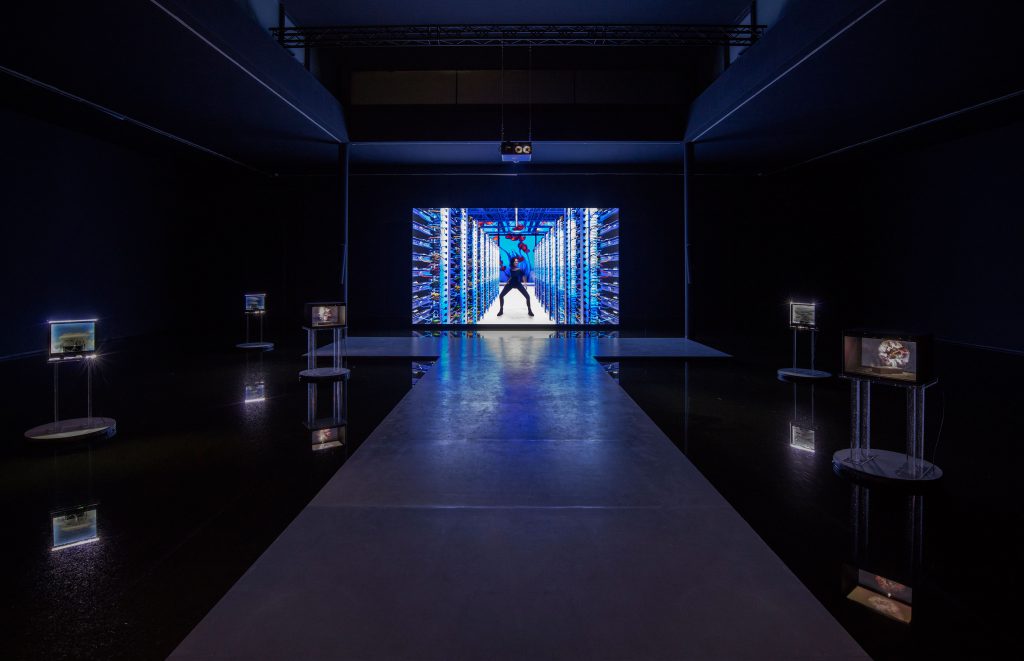 Cécile B. Evans, What the Heart Wants, Installation view, 2016. Courtesy of Berlin Biennale

The other main venue is the Akademie der Künste right by the Brandenburg Gate, the American and French Embassies, and the Adlon Hotel. The general vibe here is that of an exceptionally clean airport terminal, which again goes well with the tourist theme. 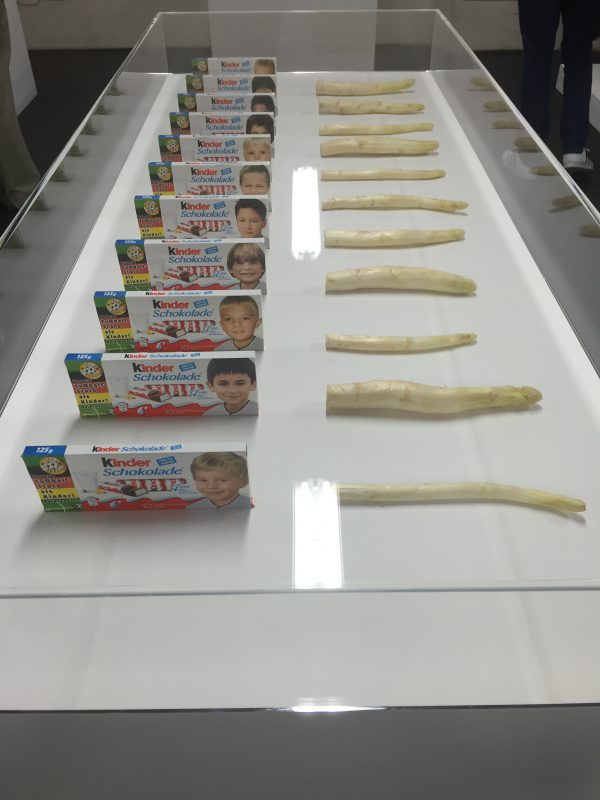 From the top balcony Jon Rafman shares his VR View of Pariser Platz (2016) via Oculus Rift. The hallways and rooms are filled with light boxes and sculptures that tell a story somewhere between selfie and fashion ad. The duty free shop style installation The Happy Museum (2016) by Simon Fujiwara with help from his economist brother Daniel completes the airport terminal feel; it even includes the body paint version of a Lufthansa uniform.

The ESMT (European School of Management and Technology) and the Feuerle Collection have comparatively few pieces on display, but the locations in themselves are fascinating (one is a leftover from Berlin’s communist era and one a revamped WWII telecommunications bunker). Don’t miss out on the opportunity to see them. 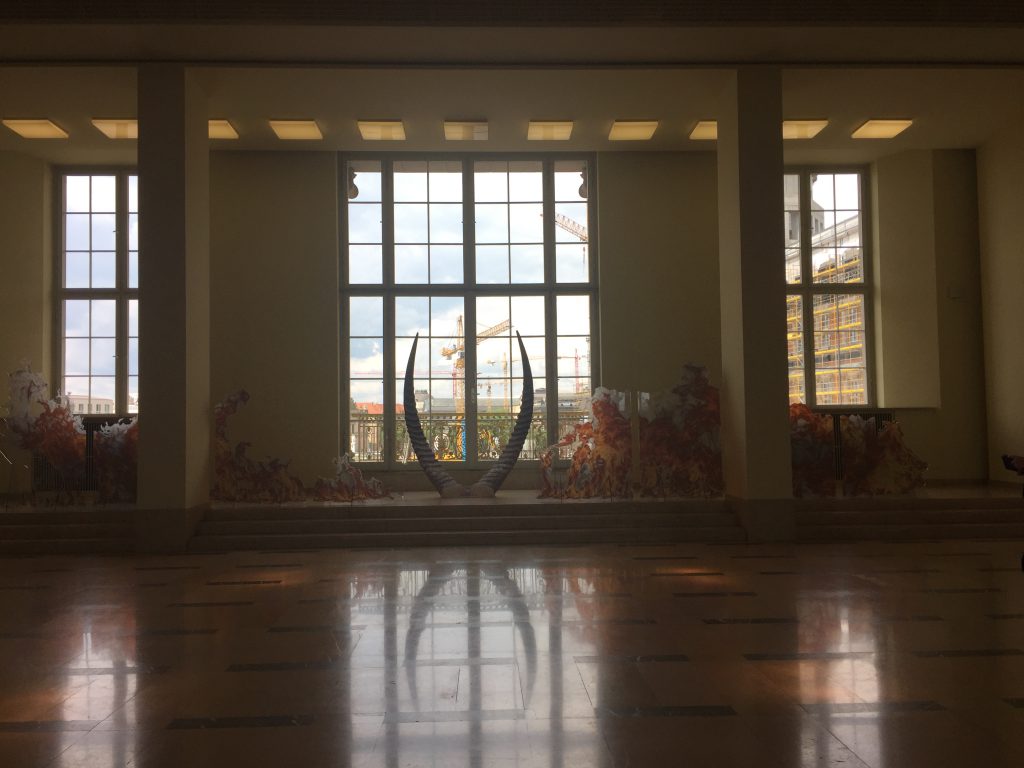 The ESMT is a private business school located in the former building of the Staatsrat (State Council) of the GDR. The paradessence DIS is looking for is most impressive here where contemporary business has taken over a site of socialist history.

The works on display here deal with corporate identity and branding. The installation  ٕﺍاﻳﯾجابﻴﯿة ﺩدﺭرﻭوﺏب/Positive Pathways, 2016 by GCC, an artist collective from Dubai, incorporates New Age practices in the run to the economic forefront.

The Feuerle collection is the latest addition to Berlin’s private bunker art museums (all of which are worth a visit simply for the bunker experience). The ground floor is dedicated to the Biennale until September. Besides wall pieces and video the main draw here is The New Media Express (2014), a model train by Josephine Pryde that runs through the space on the hour. With a name like that, having it run head on into the wall would be a statement, but would not go with the general vagueness of the show. The paradox of not having cell phone coverage while inside a communication bunker is a bit weak considering that in Germany you lose your signal upon entering an average prewar flat.

The last venue, not included in the price of a basic ticket, is a ride on the tourist boat Blue Star, appropriated by Korakrit Arunanondchai and Alex Gvojic, that serves as an exhibition venue and place for special events. For an additional 10 Euros you get to ride the standard tourist course while enjoying a b-horror movie set.

In addition to these locations, a lot of the work takes place on the Internet, where artists share their “fear of content”. There is also the soundtrack Anthem, a collaboration of artists and musicians, as well as an extensive public program ranging from the Saturday workout to performances to musicals.

As said before, the curation of this spectacle is remarkably consistent. The removal of any rough edges makes their aesthetic instantly accessible. The exhibition overall is so homogenous, it almost feels like a Photoshop filter has been applied to every piece, making it smooth, slick, desaturated and high in contrast like a fashion ad. Imbued with the ersatz-spirituality of the uncanny and devoid of character nature has been cast in plastic. People, when featured, appear to be a problem.

As always, a lot of criticism has gone down on the biennale already and DIS may have anticipated this for, besides the obligatory T-shirt, the merchandise includes “Hater Blocker” contact lenses designed by artist Yngve Holen. 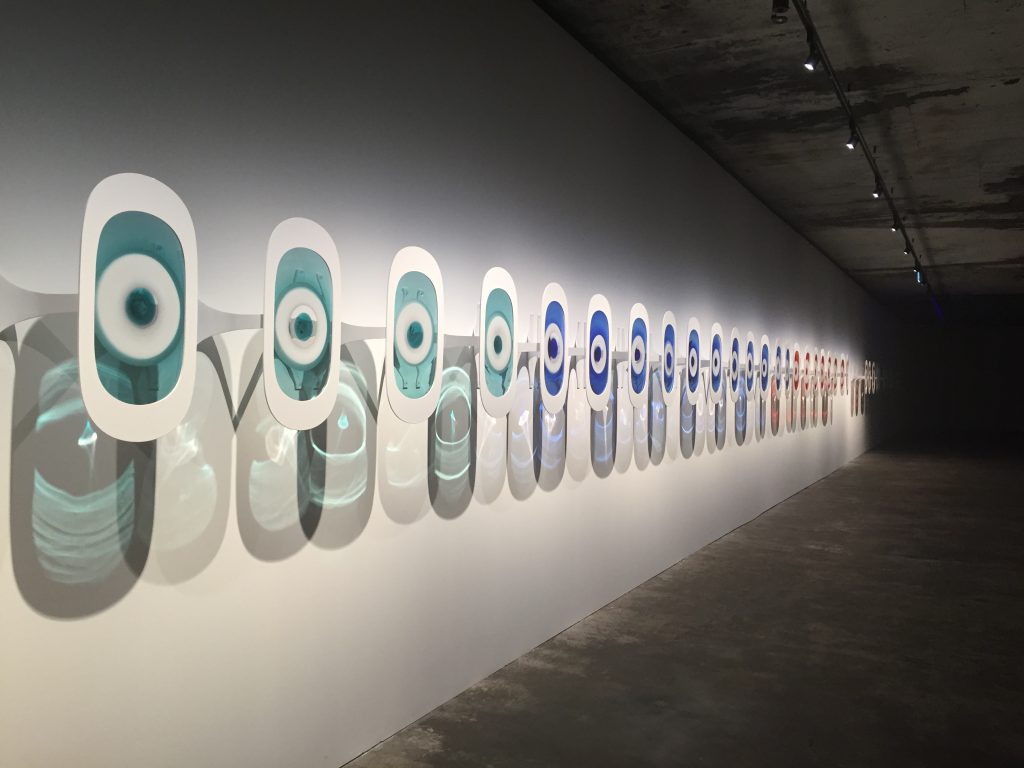 It is not just the opportunity to land a pun that causes critics to dismiss and dis DIS, but rather to make the case that the bb9 signifies more than a prank. The manifestation of Post-Internet art is a reaction to the perceived shortcomings of the previous movement (net-art). What is new is that the solutions in 2016 are so compatible with commercial success. Profit is the new rebellion, and it incurs the wrath of a generation of net-artists that not so long ago cleared the path, who worked hard and earnestly with idealism and no remuneration to speak of to make the Internet a viable medium. It is a generational war and this time the generations are only a few years apart, with the next one on the rise already. This makes the current atmosphere particularly charged.

A big problem with Post-Internet, post-critique, post-contemporary is that the strategy of simply defining as “post” whatever you feel is outmoded runs a risk of becoming reactionary instead of promoting true innovation.

If we see the biennale as a gauge to where we are at in the art world (and the world as such), we must conclude that a dramatic correction of course has taken place. If the 7th Berlin Biennale was the epiphany of political activism, artistic anarchy, openness (to the point that it was free of charge to the public), the 9th biennale appears to be the complete opposite, the slickest, most commercial and least political biennale yet.

Where the 7th biennale looked like a recycling center, the experience in 2016 is that of entering an expensive shopping mall. 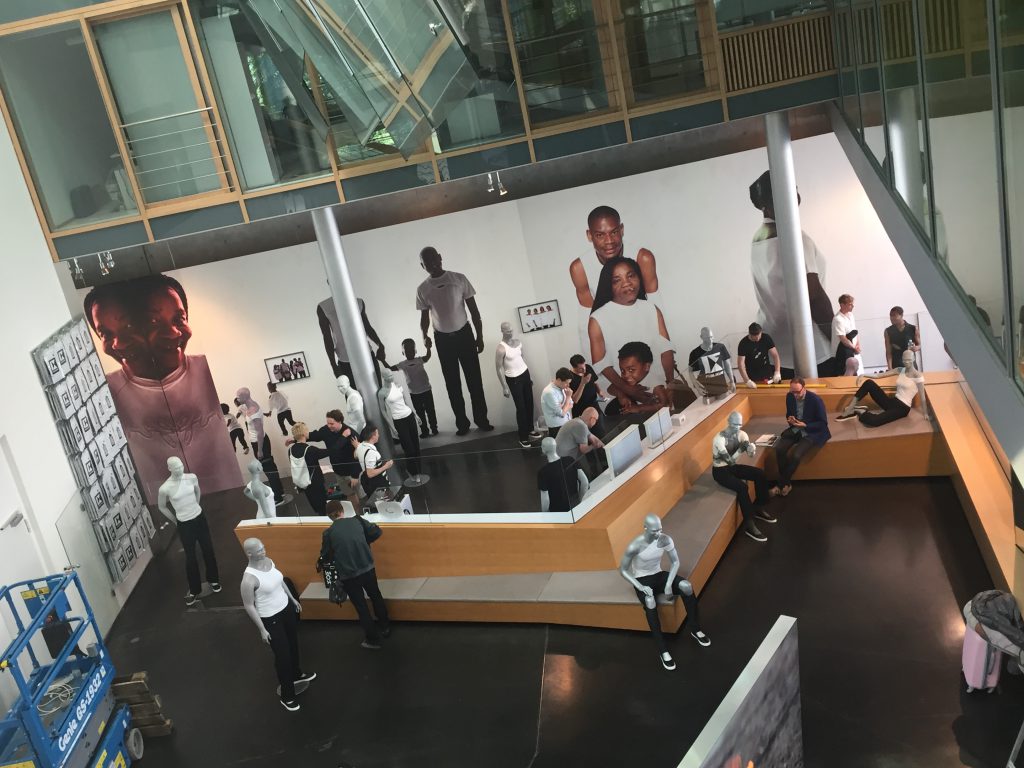 It is not as superficial as DIS pronounce. You may choose to find a critical layer underneath the slick surface, and if you dig deeper you get down to the philosophical underpinnings. By complying with the rules of the present (including capitalism) DIS seeks to speed its demise. You could read up on accelerationism, the post-contemporary time complex, xenofeminism and the speculative present, but you may have a better time if you stay with the superficial and enjoy the shiny exterior. The philosophical and political ambitions one layer down feel more like an alibi than a serious attempt at subversion.

So why not go along with the ride, tour the city, enjoy the shows, take the workshops, buy the T-shirt and go for a ride on the tour boat As far as the Berlin Biennale goes, this one is well organized and very accessible. The visitor will leave with a very good idea of what the present and the post-contemporary might look like. It is unlikely, however, that this biennale offers a true glimpse of the future. For here is another paradox: after spending a day at the bb9, the post-contemporary already feels dated.

(all photography by Ivanna Heredia) 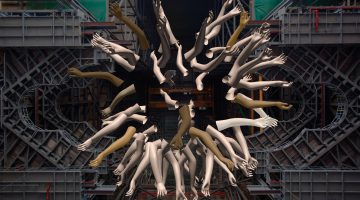