A musical score in the conventional sense is synonymous with sheet music, a written or printed notation of a composition on staff paper. It is also a visual representation of music, which is what fascinates many visual artists. Scribble something on a piece of staff paper and a musician will be able to read and play it. No musical knowledge required on the part of the visual composer. 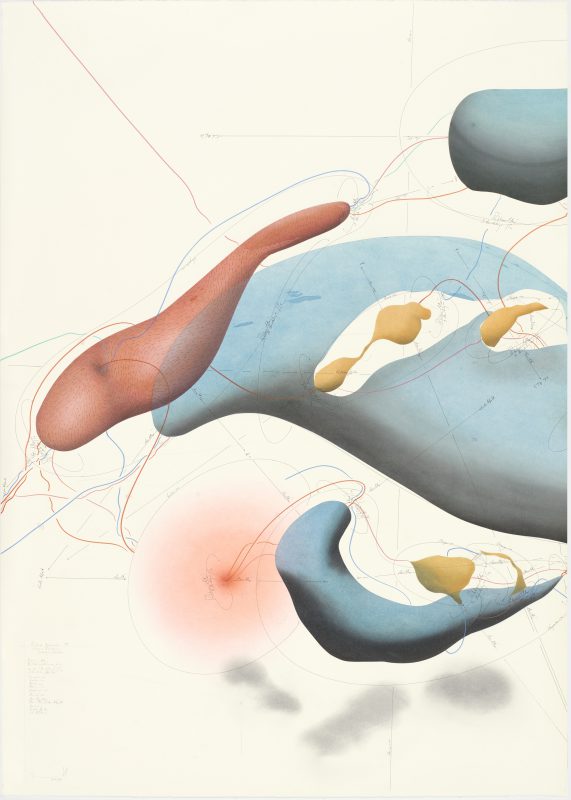 The visual approach to composition is not new, there is even a movement called Augenmusik (“eye music”) where pieces are copied in unusual ways for added symbolism. The approach is however quite controversial. In “Notation: A Manifesto” Dennis DeSantis writes:

This is certainly a hardliner’s view and the curators of the exhibition Scores at Hamburger Bahnhof do not seem to share this attitude. The show is part of the series “Works of music by visual artists” and a project of Freunde guter Musik in collaboration with the Nationalgalerie, so even conceptually it is an acoustic and visual co-production.

While music and visual arts have been mingling for at least a century, only recent years have seen an increased interest to bring music into the museum. Dada, Fluxus and Punk, movements that saw a need to break down restrictions, expanded boundaries and blurred borders in order to find adequate expression laid the foundation. Scores seems to focus less on innovation and restrictions than on describing artistic process and the fragmentation of everyday life, thereby attempting to incorporate contemporary affectivities. 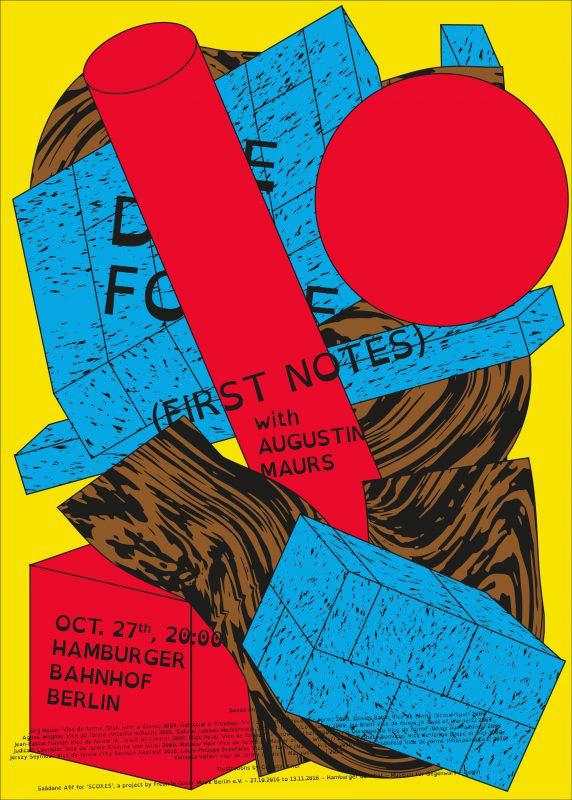 The kick-off event for scores was the performance of “Vice – de – forme: first notes” that had the composer Augustin Maurs programming a Yamaha player piano. The piano will be playing in the gallery as part of Saâdane Afif’s work Vice de forme: Das Kabarett which combines Man Ray’s phallic sculpture Hommage à Priape / Presse papier à Priape (1920/1972) with an excerpt from Reiser’s cartoon Psychose d’attentat (1974).

The performance and programming in progress, was at times melodic, at times simplistic, a bit tedious and full of interruptions. The score he worked with was at the piano and not displayed to the audience. The event itself is part of Afif’s installation, the player piano placed in the center between posters and wall paintings of commissioned poems that refer to the work as well as giant willow weed baskets mirroring the geometrical forms that the work references: cone, sphere, square. For visitors unfamiliar with Afif’s work that seeks to create networks, the event and exhibit can be quite confusing. The work mirrors the entanglement of people and processes in everyday life and especially in music production. But it is difficult without context to see how they are connected, especially since the only recognizable object formed by the shapes in question seems to be a big phallus. Again, it is not easy to see in this shape a nuclear facility as well, unless you know what to look for. And even if you get the joke it is a bit of a one-liner. 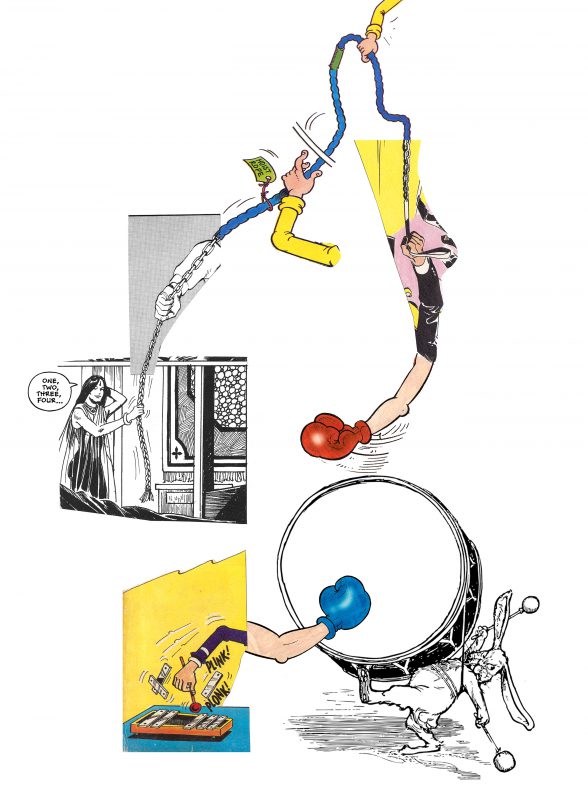 Less fragmented and much more entertaining even without much context is the comic book cum score To Be Continued by Christian Marclay. The work was commissioned by Freunde der guten Musik and is to be interpreted and played by musicians. Marclay, who emerged from the New York punk scene of the ‘80s and who has a history of experimental approaches to music, leaves it to the musician to interpret his visuals. His images, sketches, visuals seek to inspire sound, but do not dictate it. This approach can be satisfying and successful both visually and acoustically, his videos, slides and drawings work both as visual art and as scores for performances. Also on display are the older works Screen Play (2005) and Zoom Zoom (2007-9).

Jorinde Voight’s drawings are impressively big and take the term score rather literally. Her drawings and instructions seem slightly esoteric, as does the title “Earth Song.” Maps seem to be twisted and stretched, instructions are written on top of pigment. She follows a strict set of rules just like with regular notation. The ensemble Zeitkratzer, who is performing her work, would be the best judges of if and how her new system adds to and improves on the system of notation that is commonly used. 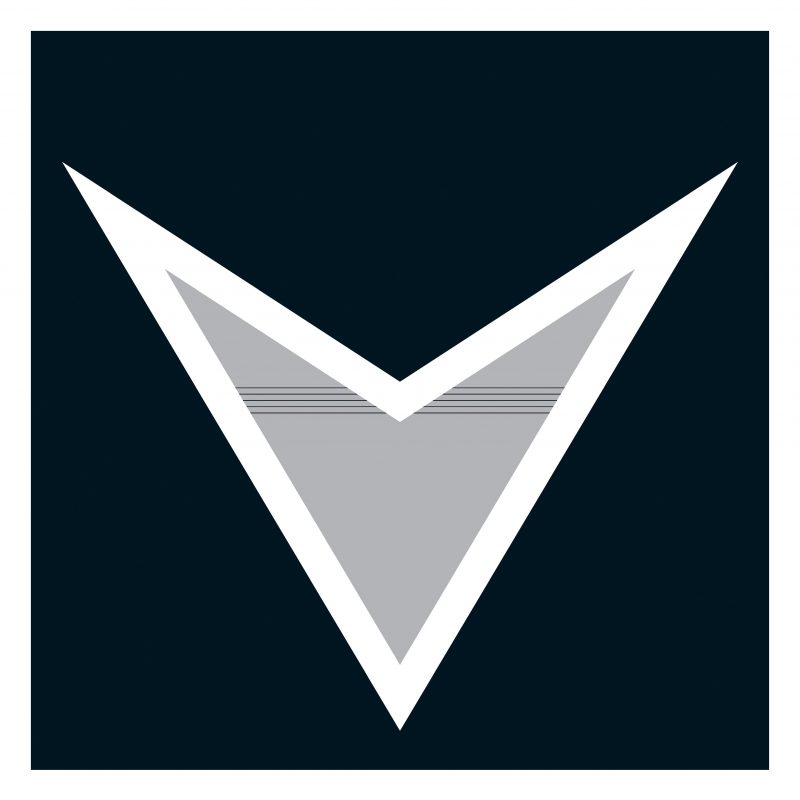 Ari Benjamin Meyers in Who’s Afraid of Sol La Ti? shows Sol LeWitt-inspired notation in multiple variations, a seed theme he composed, and 15 “meta-scores” that are to be interpreted by a composer and a musician. Every day during opening hours Wojtek Blecharz musically translates these scores, which are then interpreted by the musician Susanne Fröhlich on one of her 50 recorders. This work again is very much about process.

It is difficult to judge in advance what these approaches to scoring and composing can add to the musical systems commonly used. The exhibition certainly raises questions. What does the viewer gain by witnessing the process of production? New insights that enrich the experience of listening or does it take away the magic? Can these scores work as visual exhibits? Do the augmented scores improve the music or the enjoyment of it? If so, what do they add?

The final performances present the outcome of the processes that are allowed to develop over the 15 day period. In addition, the recordings will be available on vinyl.