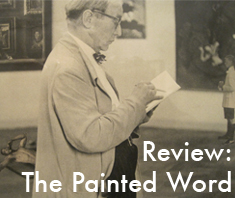 Why should I be surprised that this show is a standout? Peter Selz has been curating important exhibitions for over fifty years –at Moma/NY, Berkeley and beyond…we should come to expect it. To see the energy and vision he continues to exude in his nineties is exciting. He and co-curator Sue Kubly have mined deep and wide for important and early visual and text driven works by a number of Beat poets including  and Meltzer. I reiterate – deep.
And wide. The works come from Tibor de Nagy Gallery in New York (Jess), artist estates, private collections, local galleries (Krevsky representing Ferlinghetti) and the artists themselves. Some of the works are revelatory. One abstract work in colored crayon from the early 1950s by Jess’s partner, Robert Duncan, is as strong as any Ab Ex’er work on paper of the era…and he’s supposed to be a poet, not a visual artist. Makes one wonder.
There is a very early 1952 work by Michael McClure, “Self Portrait with Ghost Mother,” created before he came to San Francisco from Kansas with Bruce Conner. Kenneth Patchen’s nineteen watercolors, often merging text and abstraction, are a strong exhibition in and of themselves. And there are three floors of this type of work that goes on and on. Just stellar.
Jack Hirschman is represented by an abstract oil on canvas (1996), its weathered surface looking like it matured over time. It was loaned by the Furey family, who also had a hand in producing a documentary film on Hirschman, “The Red Poet,” which will be screened May 20 at Meridian.
William Saroyan and Kenneth Rexroth offer up some tasty items for display. There’s one William Saroyan watercolor as delicate as a calligraphic Mark Tobey foreshadowing Brice Marden. Ferlinghetti is represented by a slew of large oils. I get the feeling Ferlinghetti is prouder of his painting than his literary success or business acumen.

There’s not much to argue with concerning this show. The sum of the parts contribute an aura brighter than any one work…imbuing all of them with a patina of history, memory, and San Francisco in full bloom of it’s Poetry Renaissance.
There are several programs associated with the exhibition, the first a reading of Ferlinghetti poems by Peter Coyote, coupled with the screening of a feature length film (82 minutes) on the poet by Christopher Felver.
Coyote is legendary. Mime Trouper, Digger…while I was slouching around the Sixties in Utica, New York, Coyote was front and center to one of the more remarkable periods of our era. He survived, and survived well. Voice still eloquent and strong, practiced from thousands of voiceovers, he riveted the crowd…make that the overcrowded.

In addition to the film, Felver contributed over twenty black and white photographic prints of Ferlinghetti, Allen Ginsberg, William Burroughs, Jess, Rexroth, et al. – like Patchens’ watercolors, a show in and of itself. The film itself is jam packed with all things Ferlinghetti, maybe a bit much at times, but always tasty…as rich as the poets’ life. It’s a chronological portrait of the journey from Larry Ferling to Lawrence Ferlinghetti, and all matter in between, including stints in an orphanage, as well as both European and Asian theaters during WW II, strolling Nakasaki days after the bombing, City Lights, “Coney Island of the Mind,” fighting the good fight for Allen Ginsberg, “Howl,” and the First Amendment. Ferlinghetti comes off as someone providing a calming influence on those around him caught in the swirl of the hurricane. The San Francisco Poetry Renaissance. It’s hard to imagine it existing without Lawrence Ferlinghetti.
There’s a renewed interest in the examination of the Beat visual arts scene these days. Ever Gold hosted, “Beat by the Bay: San Francisco Beat Artists and Their Galleries,” earlier this year. 871 Books currently has a display of Beat ephemera, and now this exquisitely curated Meridian show. Important exhibitions for Jay De Feo and Hassel Smith are on the way. It may not be the Northern California equivalent of “Pacific Standard Time,” but it’s a good start in unraveling the cultural history of The City, an era and the participating artists and poets that captivated a nation. 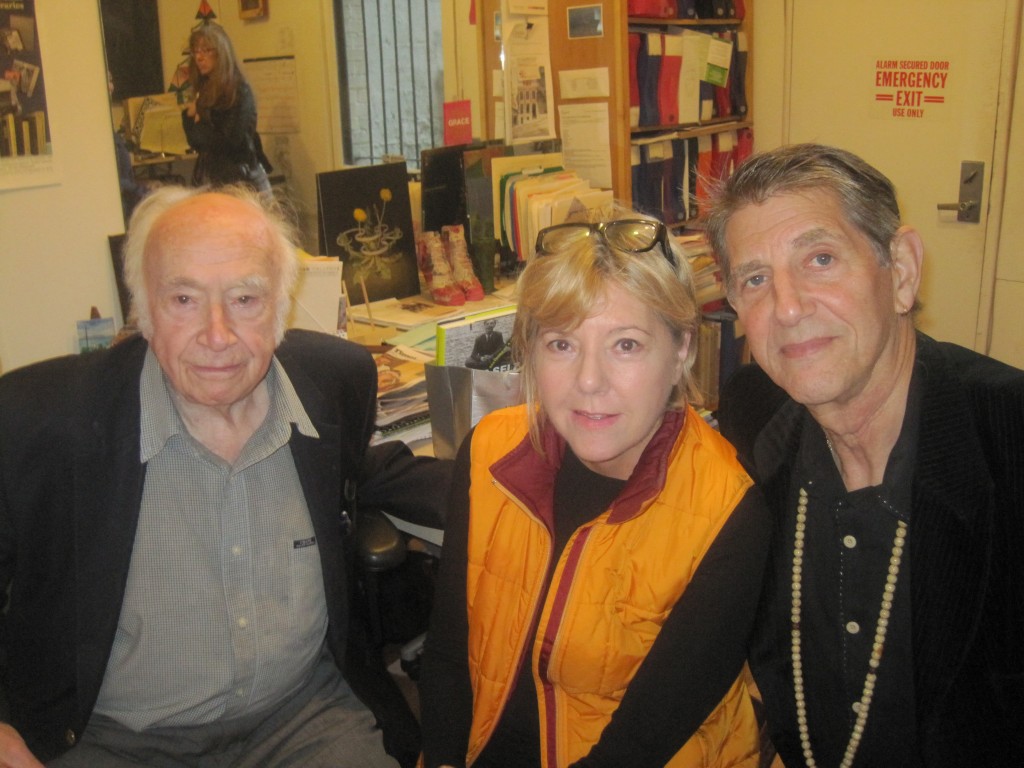