Aaron Bobrow’s first solo exhibition, Electric Bathing, is on view at Andrea Rosen Gallery in New York City. The show takes its name from architectural theorist Rem Koolhaas’s “Delirious New York,” in which the city’s grid plan that ignored geographical formations, necessitated its modern vertical growth as Manhattan aimed for greater economic success. Koolhaas believes the grid pattern has wrought a city based on “congestion for congestion’s sake,” and skyscrapers that are like “a city in a building.” Manhattan is an irrational phantasm that New Yorkers try to escape at even more surreal Coney Island. Bobrow quotes Koolhaas on Coney Island in his press release:

Bright lights are placed at regular intervals along the surf line, so that now the sea can be enjoyed on a truly metropolitan shift system, giving those unable to reach the water in the daytime a manmade, 12 hour extension [. . .] false daytime is not regarded as second rate.

Bobrow’s abstract and modernist grid paintings intersect Koolhaas’s theories with art critic Rosalind Kraus’s interpretations of grid; they are in agreement on the grid’s effect of anti-humanist rigidity and as a myth, (New York, the utopia), or mythological symbol (a Greek cross). The paintings are an exploration of the immeasurable effects of systems and materials.

Aaron Bobrow’s “Electric Bathing” is on view at Andrea Rosen Gallery through March 23, 2013. 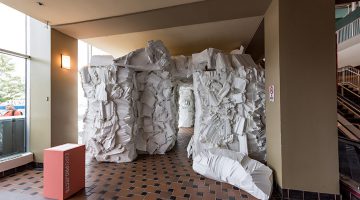