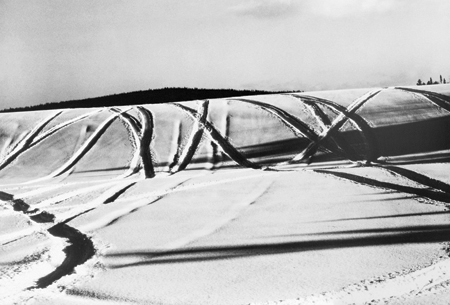 As an early practitioner of Land Art, Body Art and Conceptual Art, Dennis Oppenheim cultivated an innovative career spanning 50 years. Over time he expanded his practice to include ambitious public sculptures and installations, integrating an investigation and realization that embraced a radicality of positioning. His works continued to evolve, contributing significantly to the postmodern discourse.

Oppenheim rejected artifice and product constraints, coming to question the conditioning limitations of the white cube as his interventions moved outside. In this new environment, he studied the uncertainty of the moment as it related to a radical subjectivity where the body assumed a primary role in the realization of the work, both in relation to itself and its external environment.

With such a broad-ranging discourse, there exist myriad opportunities for curatorial summation and temptations of a retrospective view. However, of equal note are Oppenheim’s distilled seminal moments of conceptual expression. This exhibition focuses on these instants, exploring the artist’s penchant for challenging singularity of outcome within a prescribed activity, a succinct presentation of a moment in time. Such a moment is 1968.

A long-time Bay Area resident having attended both the California College of Arts and Crafts and then completing his post-graduate studies at Stanford University in the 1960s, Oppenheim was fluent in satirical overview of art. However, he felt compelled to enter the critical conversation of object, action and place happening at that time in New York alongside Walter de Marie, Robert Smithson and Michael Hiezer. There, in 1966, he began his work in the field, motivated to act as environmental producer—grafting forms and volumes into the landscape, thus introducing the notion of conceptual geography in art.

By 1968, according to many, Oppenheim’s understanding of place was heightened, as evidenced in some of his most resounding and powerful works captured through photo documentations. Such actions as “Annual Rings,” “One Hour Run” and “Landslide” are contained within this exhibition. These critical works explore notions of ritual, political borders, and the negotiation of the irrationality of nature. This approach was symptomatic of the greater social, political, economic and aesthetically transformative shifts in the US during the time. Along with additional photographs and drawings from 1968, as well as his film Backtrack, the pieces featured in this exhibition still function as the baseline from which current art about place has sprung. As part of the future generations he has so profoundly influenced, we are honored to pay homage to this vital figure in the history of Conceptual Art.

Reminiscing of this time, Oppenheim noted: “it was very much a modernism feeling…taking not only Minimal Art but sculpture and traditional art one step further into the realm of the unknown…it became clear that the attention that these works were getting authenticated the fact that they had something new…everybody who was doing Conceptual Art had a certain sense of the value of their own work during that early period.”

His work will be displayed this year at solo exhibitions at Kunst Merano Arte, Merano, Italy, and at HaBeer, Berrsheda, Israel, and in a group exhibition “Ends of the Earth: Land Art to 1974” at the Museum of Contemporary Art, Los Angeles.

Next post EDICOLA - A Pop-Up Shop by COLPA PRESS