So obviously the video at the end of this post is old news…however I woke up at 6:30 this morning and for some reason tried to pick up the MIT Press Institutional Critique Anthonology that I bought a year ago which I have only looked at the very few photos in it since then….I thought it was time to dive in…I think I need to go back to school and get an MA, MFA, or a PHD…they shouldn’t even let none master/ Dr. degree holders even buy this book. Perhaps someone at CCA can translate the text for me at some point as this has happened many unsolicited times before.

After I drank some strong ass black coffee I realized that I was reading 3 pages over and over again because I had no idea what the fuck was going on. Anyone that says different is just trying to look smart. The one thing that I got was once there is a institution around something it fails it’s original intention of the un institutional idea- so there for this book killed the original meaning…right? Maybe not. However upon relaying my early morning buzzed problems to a friend they suggested I just re-watch Hennesey Youngman’s Art Thoughtz on Institutional Critique…I don’t know if this made me learn anything new except that the system is fucked and it will always be. By the way there is a lecture by Hennesey coming to SFAI sometime in the next few months…should be a good one…and we are going to let you “good internet people” know about it as it comes closer. If you didn’t know one of the publishers of SFAQ has just become the interim Director of Exhibitions of SFAI until the end of the year so expect to see some more informal information exchange about upcoming public exhibitions and the visiting artist lecture series…all put together by Glen Helfand. 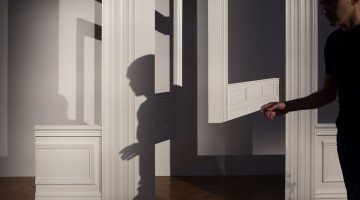