“Get the Flu” Forever

Mark Benson’s “Get the Flu” at Ever Gold Gallery has been lolling around my brain. Benson staged a performance by the same name during the show’s opening, in which, for $50 a person, a registered nurse administered this season’s flu shots and Benson gave out an editioned certificate of authenticity. Though I wanted to participate in Benson’s flu shot piece, I didn’t. Growing up in Berkeley, California ingrained a reflexive fear of common American medical customs, which I shun openly while lacking confidence in the science that vilifies them. I realize that seems wishy-washy verging on willful ignorance, but whatever. What would disturb my be-mulleted alternative doctors about a flu shots is precisely why “Get the Flu is great art: the flu antibodies injected last until you die, though their efficacy in preventing the flu diminishes in months, your resistance causes the virus to evolve (Time, Immunization Action Coalition.)

The certificate sold by Mark Benson and Ever Gold Gallery was more expensive than a seasonal flu shot, so what were those people so committed to art/unafraid of mercury poisoning paying for? The injection is purchasing an edition of, and a lifetime of participation in, “Get the Flu”; those antibodies were put inside people with a specific intention, turning participants into a walking, talking Mark Benson piece. The piece’s duration is until death and, for those performing it, the certificate is essentially a label. The selfishness and lack of foresight required to participate in “Get the Flu” is an illogical paranoia, maybe saving you from a virus for a season while driving the virus’ evolution. Sooner later, the flu’s going to get you. That’s beautifully intense, but I like long-term commitment and moral ambiguity.

Though Benson’s certificate as an edition is a commodity, “Get the Flu” only exists as long as those who received a shot. If the inoculated sell their certificate or when they kick the bucket, the certificate will become a piece of ephemera. Performative and conceptual art often relies heavily on paperwork: documentation or instruction as the artists’ intellectual property and as a commodity. My feelings on certificates of authenticity are about as intellectually fortified as my opinion on flu shots, vacillating between being thankful there’s a historical record and wishing the piece had maintained a perfect ephemerality. But “Get the Flu’s” duration isn’t a dance performance or the length of time to digest canned food. Human lives may be relatively short, but they feel like forever. If I had gotten a shot, I’d like a piece of paper to remind me of the role I had taken on.

Mark Benson’s “Get the Flu” in on view at Ever Gold Gallery until September 28. 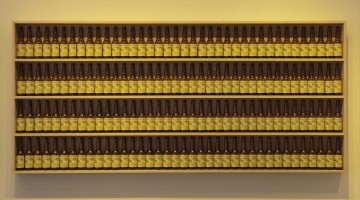 Name-Dropping Stories Off The Top Of My Head 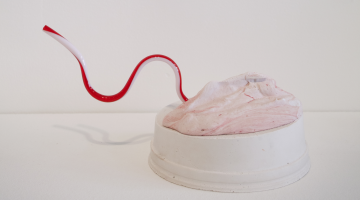 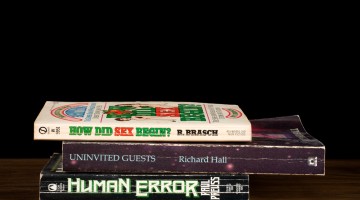