The other day I had the pleasure of interviewing Book & Job Gallery’s Carson Lancaster on the roof of his TL apartment building on one of the nicest days SF has seen in awhile.

We met up at Book & Job located on Geary at Hyde and Carson took me through the gallery to talk about the largely DIY renovations (with the help of his brother and his friends) to what was once a Chinese acupuncturist’s office that had long since been abandoned. Smashing walls down, dropping a 150 lb radiator from the wall to the cement, rewiring all the electrical shit, and countless hours spent cleaning and painting all comes with the territory of reopening a Tenderloin-abandoned storefront.

We walked the two blocks to his “penthouse” to enjoy the unbelievably good weather from his rooftop. Although it is an amazing apartment, huge and bright and beautiful – it is still a twenty-something-year-old-guy’s TL apartment – which means it is aged, quirky and filled with empty beer cans. I find myself right at home and we sit and talk about how he got the idea to start Book & Job in the first place.

Nikki Greene: So what’s your story? How did you find yourself in San Francisco?

Carson Lancaster: I went to Sonoma State University for general education and lasted 3 semesters. The college is located in the worst suburbia town of all time, I found myself smoking a ton of weed and not doing much else. That’s all there is to do, unless you find yourself mountain biking or in a fraternity or some sort of sport, you’re just going to be smoking dope and selling dope and that’s what I was doing. I got crazy depressed during my third semester and found myself escaping to Frisco more and more. I decided to bail on SSU and enrolled at the Academy of Art for Photography.

I really enjoyed the first year or two, and then it just lost something to me…it’s nice to have critiques, reinforcement from teachers and an artist base, but that’s not necessarily something you need to be spending $2,500 a class on ‘cause in the end everybody comes out of the place with a piece of paper. And that piece of paper doesn’t justify you a righteous spot in the world of art…I still had a very long way to go in art school and it just didn’t make sense to me. I weighed my options, I knew my parents were going to be pissed at me – I was going to be their only child to graduate from college- but it wasn’t worth it for me. My dad was really bummed but my mom was pretty cool about it. The beauty of divorced parents.

So I had been working this job I found off Craigslist doing late night photo editing for an event photography company. You get paid really well its just a funky thing when you’re going through thousands of photos of the city’s elite and all these hoity-toitiest of people and I’m sitting there in my underpants editing photos – Just a really funny juxtaposition. So, I worked that for a while and started shooting events myself and weighing my options. Okay… I’m in photography school and I have this photography gig which isn’t at all what I want to end up doing with my life, but who am I to complain – I’m getting paid really well. So, I just looked around and said I’m going to focus my time on this event photography thing, make as much money as I can, travel and see what happens. I spent about 2 years fully working that job. In between I got to go to Thailand and visit my parents down South in Santa Barbara and places like that and just enjoyed my life. Part-time work that paid really well and then got to that point – What am I doing? I’m making money but frying my brain staring at this computer screen going through every image. It started to take away from something I used to love to do…

At this point, Carson gets a call from a beer sponsor for the next opening and meets him back at the gallery while I have a blast climbing around the edge of the roof taking bird’s-eye-view photos of one of my favorite neighborhoods. He comes back with a few semi-chilled beers for us and we continue… 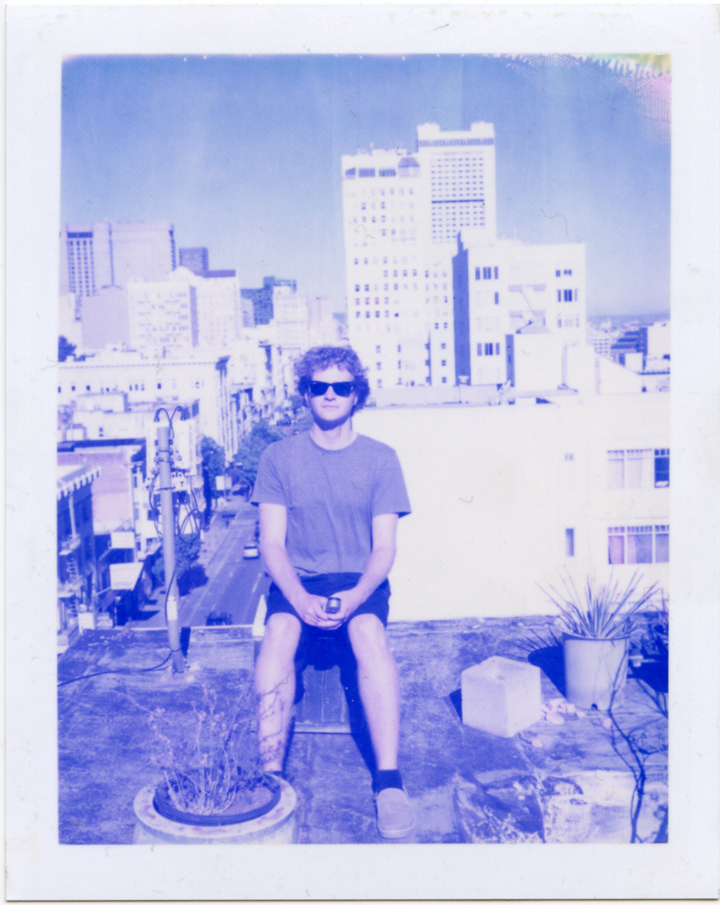 NG: So now let’s start again now that we got our free beer:

CL: So, you get to the point in the job where you start to feel the monotony and think to yourself what are you doing here? You are in this city that is so vibrant and full of everything, what are you doing to be a part of that? How are you a part of it? What can you be doing? I spent a long time watching the neighborhood from up here, spending a lot of time going out at night by myself kind of seeing how it worked. San Francisco’s only so big so these impoverished areas can only remain these strongholds for drugs and poverty for so long before the gentrification starts pushing in. I talked to a lot of people in the neighborhood and they were very open-minded about it. They weren’t so happy about their rent going up but they’re happy that tourists are coming to the neighborhood and something is changing – it’s not just the drugs and violence anymore.

NG: Yeah, it’s not just bars at night attracting a younger crowd. There are other places to go…

So I wanted to open up (what was to be called) Little Saigon Gallery and went through this entire rig amoral with one spot. It gave me more knowledge about doing a gallery and if you have your heart set on a space you will do stupid things. I could’ve easily done a stupid thing.

NG: So you ultimately wanted to make your own mark in this neighborhood?

CL: There’s a huge artist community and everyone just ends up hanging out. Its something you don’t even have to go searching for – and some of these people make brilliant art and are just petrified to show. They don’t want to make that commitment. Not only couldn’t land a show at a well-known gallery but couldn’t even comprehend having a chance to. Nor could they afford to rent a gallery or studio space. They can’t come up with the money. It was never my intention to run a gallery that didn’t make money but at the same time if we sell a piece we sell a piece. The happiness of the artist, of my friends, is worth it. While that’s not going to pay the bills it’s still gratifying.

NG: Yeah, let’s face it no one can just walk into 49 Geary and show their portfolio and say, “I want a show here.” It’s just not how it works. And there’s so much creativity in this city. There are so many people who are amazing and would love any opportunity to show artwork but it just doesn’t seem possible. That’s what’s so great about new small galleries and alternative spaces that are about supporting your own community. Especially young people because we’re all screwed right now. None of us are getting real jobs. Which leads me to my next question: How did you actually start the gallery? How do you do it every month?

CL: No loan, no backer, no partner, no parents help. I squeak by. My rent’s cheap. I’m doing the event photography job as a means to an end.

NG: But now you have a renewed purpose for working a job you’re not passionate about but it makes good money, and then you have this other thing going for you that’s way more important to you…

CL: It’s justifying it. Now I’m working for something. I’m doing this so I can scrape by and keep the doors open and the lights on over at Book and Job Gallery. That is the happiest I could be. If rent and electricity are paid, I’m a happy guy.

NG: Tell me about your upcoming shows:

CL: Jai Tanju started a printed exchange program out of San Jose about six years ago. It started with friends just sending out postcards and exchanging prints. There’s some collage but a lot of it is film photography. So for the upcoming show, Jai is bringing every piece of mail he’s ever received – which is somewhere between 2,500 and 3,000 of these prints. On the bottom floor he’ll string them along the walls like blankets and upstairs there will be select prints from some of the better-known contributors. They’ve never had a show in San Francisco, and this show has been in Norway and Germany.

CL: “When I first heard that Marge was joining the police academy, I thought it would be fun and zany, like that movie — Spaceballs. But instead it was dark and disturbing like that movie, Police Academy.” – Homer Simpson

Next post Chill Out! You're Going to Die (Eventually)