There was just a really great exhibition on land art at the MOCA, Los Angeles titled “Ends of the Earth”.  The exhibition exhibited a collection of works (up until 1974) that stem from a dialog about our relationship to the land we occupy using mediums such as video, film, and photography, which allowed artists to contextualize their concepts from a remote location. This exhibition was a true gem to see.  Images below courtesy of MOCA. 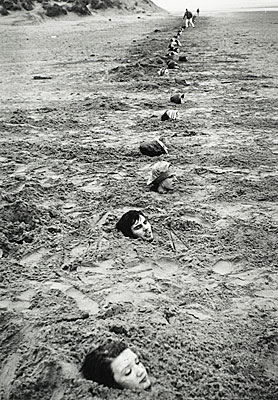 Ends of the Earth: Land Art to 1974 is the first large-scale, historical-thematic exhibition to deal broadly with Land art, capturing the simultaneous impulse emergent in the 1960s to use the earth as an artistic medium and to locate works in remote sites far from familiar art contexts. Organized by MOCA Senior Curator Philipp Kaiser and co-curator Miwon Kwon, Professor of Art History at UCLA, the exhibition highlights the early years of untested artistic experimentations and concludes in the mid-1970s before Land art becomes a fully institutionalized category. Rather than romanticizing notions of “return to nature” or an “escape from culture”, the exhibition provides a comprehensive overview that reveals the complexity of the movement’s social and political engagement with the historical conditions of its time. Ends of the Earth exposes Land art as a media practice as much as a sculptural one, focusing on the extent to which language, photography, film, and television served as an integral and not a secondary or supplementary part of its formation. Over eighty artists and projects from United Kingdom, Japan, Israel, Iceland, Eastern and Northern Europe, as well as North and South Americas are included in the show.

Ends of the Earth: Land Art to 1974 is organized by The Museum of Contemporary Art, Los Angeles (MOCA), in collaboration with Haus der Kunst, Munich.