“Jay DeFeo: A Retrospective” at SFMOMA

With limited exposure to Jay DeFeo’s work, it can seem depressive. Her eight-year obsessive creation, the over 2,000-pound painting “The Rose” with so much black and white paint layers that it looks like excavated earth, is indicative of questionable mental health. Yet, the reverential awe her monumental paintings command could only be achieved by a person possessed by heroic drive and talent. Kind of like a Beat Generation Joan of Arc. Her retrospective at the San Francisco Museum of Modern Art, opening November 3, attests to that emotional heaviness but, with a breadth of over 130 works, lightens up her oeuvre with pieces that show freedom and humor.

DeFeo (b. 1929) lived and worked in the Bay Area from 1950 until her death in 1989 (save an 18-month stint in Europe) which is maybe why SFMOMA was given the honor of opening her retrospective put together by the Whitney Museum. She studied art and art history at U.C. Berkeley, and co-opened Six Gallery on Fillmore Street (where “Howl” was first read). Between 1958-1966, she created the legendary “The Rose” in a Fillmore Street apartment that she shared with her husband, Wally Hedrick, adding layer after layer of oil paint and extending its sides until it weighed over a ton. She survived on whiskey and cigarettes. When she and Hedrick were evicted in 1966, the second-story window had to be cut away, and Bruce Conner documented the painting’s removal in his film “The White Rose.” Conner said in a 1994 interview that the painting “was the only identity she had with any kind of exterior reality” and when “it was the end of The Rose, and it was the end of Jay.” This is just the beginning of the painting’s legend-the story that serves as a sort of explanation for her inability to afford paint (but look at how much of it she used), under-appreciation during her lifetime, and the cult-status of “The Rose.” Even though the story is true, it’s reduces her to a painter lost in the woods of her mind and the painting, and diminishes the value of her other works’ intellectual and painterly content. 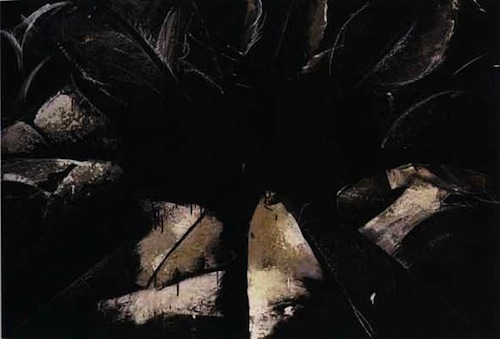 The reality of Jay DeFeo is that as a young woman she made chic minimalist jewelry, sculpted cool fetish-object crosses mirroring the church floor plans she saw in Florence, and was inspired by Neolithic art. Her experiments with Abstract Expressionism were singular: paintings like “The Verónica” look like organic wonders. On “The Annnunciation,” she wrote to collector J. Patrick Lannan Sr. that the “winged version represented some realization of all that is positive and good in this existence” (SFMOMA). Encountering “The Rose” at SFMOMA, tucked into a niche and illuminated like it’s the “Pietà” is sublime, but no more so than her other monumental paintings. When circumstance and poor health necessitated a switch from oil paint to acrylic and made her lose her teeth, she made beautiful Pop paintings of her dentures. She made the best of her studio space and mediums, making collages, photographs, and almost futuristic and abstract paintings of her photographs. Viewing DeFeo’s work holistically shrinks her caricature and the import of “The Rose’s” legend; she had a breadth and depth of intellect and talent beyond divine possession. It’s a story worth telling.

“Jay DeFeo: A Retrospective” opens Saturday, November 3 at SFMOMA, and will be on view through February 3, 2013. There is a members-only opening party tonight at 7pm.