Driss Ouadahi was born in Casablanca, studied architecture in Algiers, and painting at the Kunstakademie in Düsseldorf, Germany. It’s a tidy corollary then, that the concrete landscapes and artificial perspectives in architectural paintings by a cosmopolitan urbanite are equally itinerant. Ouadahi’s paintings are only stable in their composition. This is his schtick: Modernist grid paintings of the rigid theories of urban planning’s since the early 20th century. His “Trans-Location,” fills Hosfelt Gallery’s huge space with paintings of two types of tessellations: chain link fences, and a view through a grid, seemingly from within a skyscraper, of a person-less block of tall, buildings. Hue, the city, and the quality of light change, but not much else.

In Ouadahi’s most successful iterations, looking through the grid layered over a landscape shifts the artificial perspective of the view, with irrational shifts in direction of the grid’s depth. (For example, on the painting’s right side, the grid’s three-dimensionality looks left). These undulating perspectives are often rendered in colors reminiscent of Le Corbusier’s and Nadir Afonso’s Unité d’Habitation, box-like, concrete mass housing built in the late 1940s through the mid-1960s. Each apartment has a balcony, painted red, yellow, blue, or green. The Unité d’Habitation in Marseilles became a prototype for modernist and Brutalist communal housing internationally, but its foundations in architectural theory were worked out by Le Corbusier years before in Algiers.

Hosfelt Gallery notes that many of Ouadahi’s paintings of seemingly interchangeable cities are actually of Algiers. The French colony was, according to scholar Zeynep Çelik in “Urban Forms and Colonial Confrontations Algiers under French Rule,” an aspirational African capital of the colonies, and an experiment to “use urban design for establishing and expressing power and control over the local population,” with the intention that its successes would be implemented elsewhere (7). After being invited to lecture on urbanism in Algiers in 1931, Le Corbusier spent years creating an unsolicited plan for the city (the job was actually given to Maurice Rotival). Le Corbusier’s plans were never implemented in Algiers, though his ideas for better living conditions and less dense urban areas by separating business’ from dwellings, connected by roads and walkways, were influential. Huge blocks of concrete apartments were constructed to solve housing shortages and provide low-income housing, with disregard for social mechanisms in Algeria’s traditional urban plan. The architecture’s effect on the Algerian people is inseparable from colonialism’s effects.

The primary critique of Le Corbusier, notably by Jane Jacobs in 1961, is that densely packed separate use buildings (commercial, industrial, residential) that are geographically distant, do not allow for the intricacies of community interaction. This is also why the suburbs are isolating. Further, such urban plans have a negative effect on industry, and are dependent on cars and fossil fuel use. Le Corbusier’s ideas were (mostly) well intentioned, but, by their evolution in Algiers and around the world for low-income housing, they are unavoidably imbued with social control. They became the model for luxurious high-rises in Tokyo and projects in Brooklyn. The low-income model has been especially deleterious, shared spaces in mass residences as designed by Le Corbusier were convincingly linked to increased crime and vandalism in 1973 by Oscar Newman in his book “Defensible Space.”

If Driss Ouadahi’s landscapes and chain-link fences seem monotonous, it is reflective of the homogeneity of urban architecture since the 20th century. The far-flung success of these buildings and cities was based on an aspirational structure of land and lifestyle for a new modernity. The urban and architectural grid was a myth in the same way art critic Rosalind E. Krauss argues the modern painterly grids by Reinhardt, Malevich, and Mondrian (whose paintings the colorful balconies of the Unité d’Habitation resemble) were suppressed cruciforms in the guise of paintings on optics. Krauss writes in “The Originality of the Avant-Garde and Other Modernist Myths”:

The grid’s mythic power is that it makes us able to think we are dealing with materialism (or sometimes science, or logic) while at the same time it provides us with a release into belief (or illusion, or fiction). (12)

Ouadahi has layered two very similar elements of modernity that were perceived to be great steps forward based on reasoning—a misperception possibly caused simply by their novelty.

Driss Ouadahi’s “Trans-Location” is on view at Hosfelt Gallery through March 23, 2013.

Next post Alone and Forsaken: The Art of George W. Bush 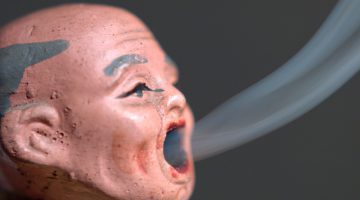