In Praise of the Funk: Practice in Paradise and Seeing, Peeping, & Scrying at Alter Space 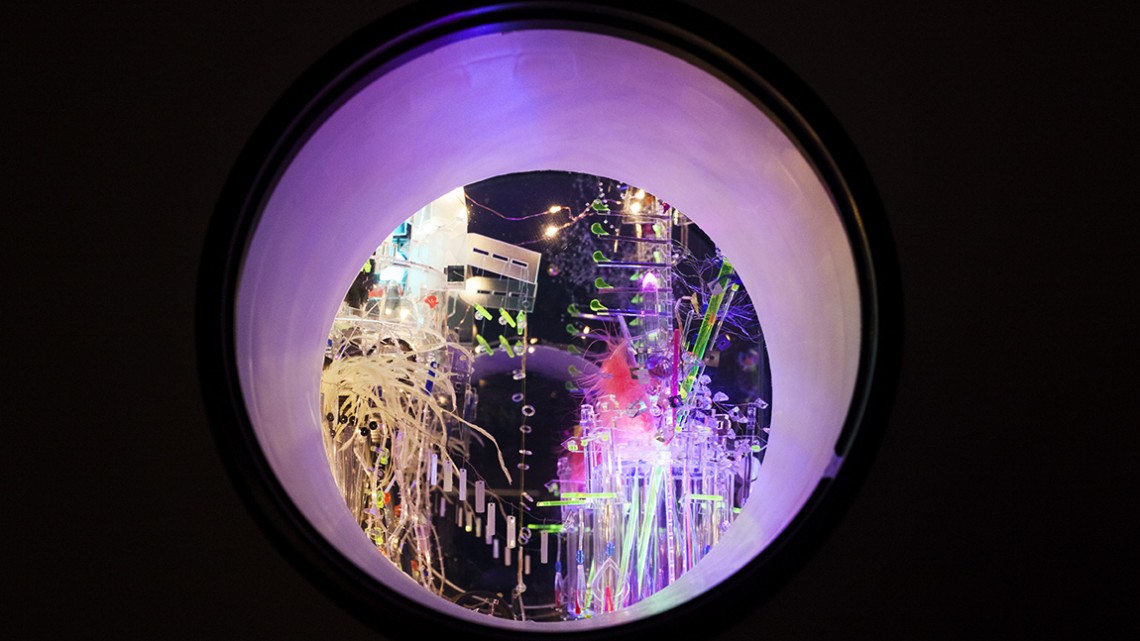 In 1967 Peter Selz curated The Funk Show at UC Berkeley’s University of Art Museum.[1] Funk is “hot rather than cool,” he said, “committed rather than disengaged, bizarre rather than formal, sensuous and frequently quite ugly. The spirit behind it? A go-to-hell attitude that typifies Bay Area artists because they have been so totally rejected, or at least ignored.”[2] Practice in Paradise, William Emmert and Joey Enos’ two-person show at Alter Space’s main gallery, is funny, smart, engaging, and it’s got the funk. Their paradise may be real, imagined, or metaphorical, but it certainly seems to be rooted in that ad hoc funky art that mushroomed in the Emeryville mudflats in the 1960s along I-80 on the way to the Bay Bridge or the Albany Bulb. Inspired by both pop and personal mythology, Emmert and Enos take humor seriously, with Enos noting that “one way to rebel in the art world is to use humor, a humanizing and radical act…. You can catch more flies with honey instead of vinegar.”[3] Both artists make their sculptures and wall pieces by hand, combining traditional art media with industrial materials or stuff bought at a thrift store.

When Joey Enos, a 5th generation Oakland resident, was growing up, his family ran a small chemical company in Emeryville, and his mom told his dad she was pregnant by putting a sign in the Emeryville mudflats so he would see it driving home. Mysterious, poetic, bold, grotesque, ugly, and beautiful, his large pieces remind me of the mudflat sculptures that the tide washed away and caused drivers on the I-80 to slow and gawk: dinosaurs, Snoopy and The Red Baron, or a hanged man in the gallows. Using what looks like decomposing post-industrial waste, some of his pieces are small abstract colorful collages, others are large sculptures resembling brick walls, or garish painted debris that leans against the wall or somehow finds its way onto the floor. Enos says “When I make things out of foam it allows me to “pretend” or “act” like making art without the intent of making art. It removes me a level to allow me to play.”[4] He claims his color sense was influenced by a painted sunset on his Dad’s hot rod, Disneyland, and by California’s mythic landscape. Enos began his art career as a painter but now feels “like a painter that makes sculpture.”[5]

William Emmert went to a lot of wrestling matches as a young man in his hometown of Seattle and was intrigued by the painted signs that people brought to the ring. He became interested in the idea of signs as theatrical props that function in public places. When I spoke to him in the gallery, he said there was a poetic connection between these signs, his studio practice, and the signs from the Occupy protests in Oakland, where he now lives and makes art. In Practice in Paradise some of his pieces function as faux signs made out of felt while childhood posters become mysterious black paintings with text. To address the challenge of an artist being able to afford to live in the Bay Area, he installed in the gallery a replica of the painting rack (the “wood grain” is actually faux finish) from his studio to present all his unsold paintings. His Paradise is the detritus of his studio and everyday life and includes a ladder, tools, books, and assorted debris. None of his objects are “real”, but innocent facsimiles, handmade from paper, cardboard and paint. His art is tender, intimate, inviting, and it insists on getting under the surface of things. 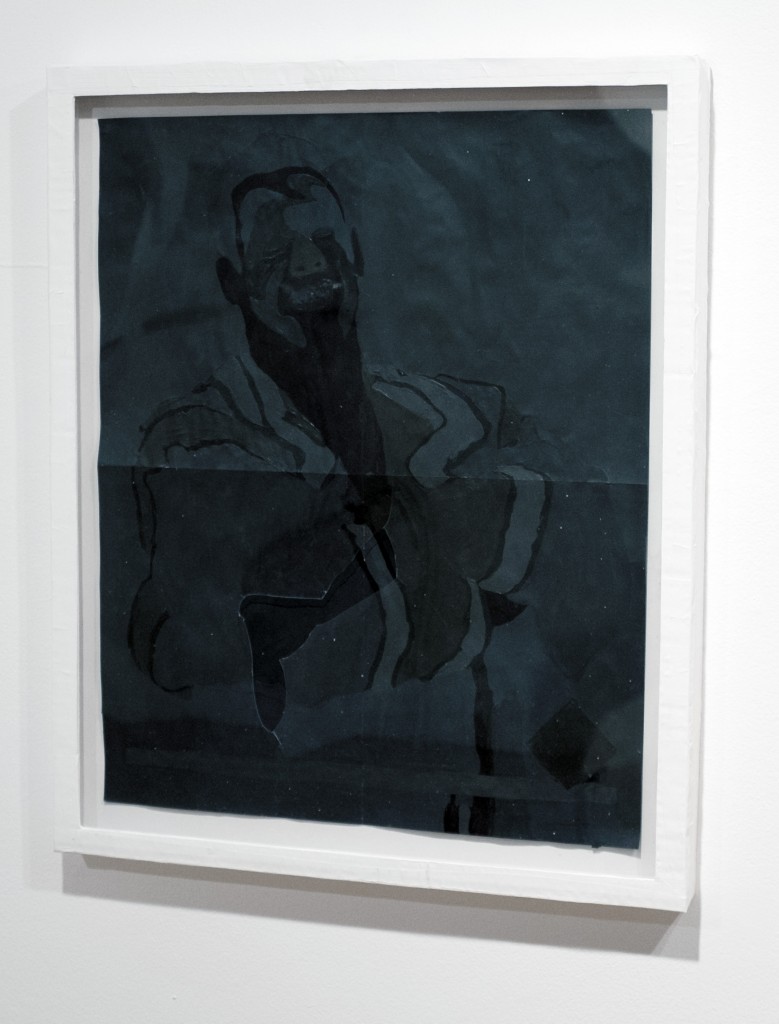 Alter Space is the former home of Stormy Leather, the S&M emporium of leather couture. While, by the 1970s, the outlaw South of Market neighborhood was already gentrifying with nightclubs and condos, Stormy Leather was where you could buy fur-lined faux leather handcuffs for $59.00. Today, the new purveyors of culture are Kevin Krueger and Kristin Olsen, and in the spirit of the place they have kept the dungeon, which is now an artist residency and installation space, and the bathroom, with peepholes intact, is now Peephole Gallery, which currently features Ma Li’s Seeing, Peeping, and Scrying. On the opening night, the artist provided headphones that viewers could put on in the bathroom while peeping into a mirrored room to watch her and willing partners as they danced to an electronic beat: a song composed by a former lover. Peeping on someone is usually forbidden, but here you have the artist’s permission to look.

Li’s elegant constructions look like ritual objects, relying on repetitive patterns and reflective materials, but are made out of cast-off commonplace industrial plastic bits and pieces. Li, who came to San Francisco from Shanghai, often works large, but the limited confines of the bathroom gallery required her to make her sculptures small (which she presented in a Plexiglas box that looked like exotic lighting fixtures inside an aquarium). On the other side of the wall were several intricate plastic sculptures that looked like small kitsch Buddhist temples with lights you could turn on and off. “Scrying” is the act looking into translucent/reflective materials, say, a crystal ball for a spiritual vision or to divine the future. 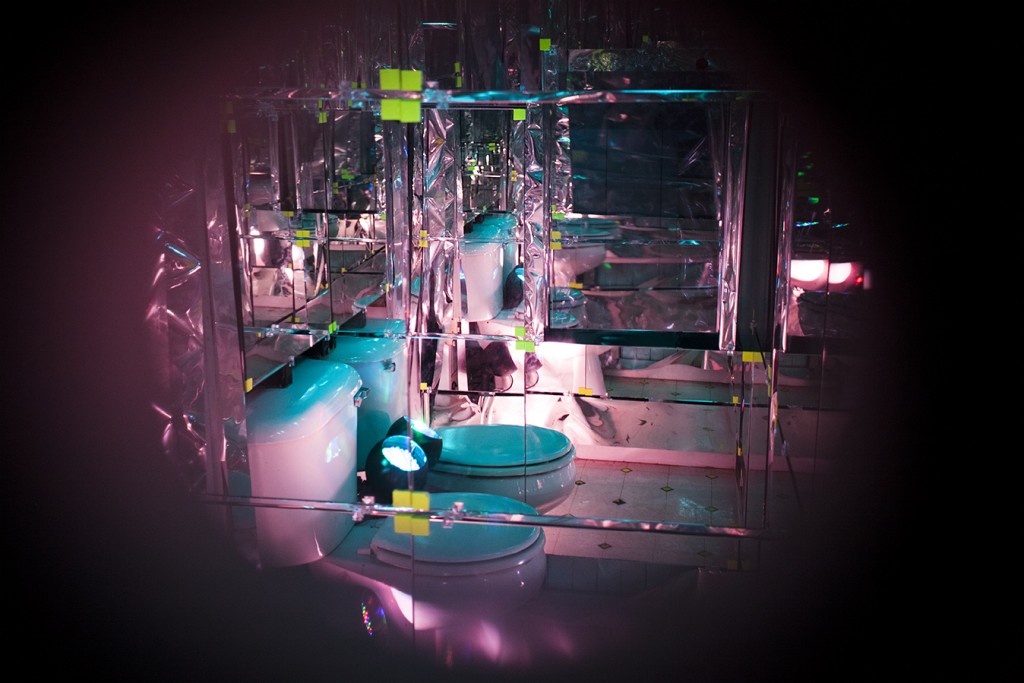 Thanks to Joey Enos, William Emmert, Ma Li, Kevin Kruger, and Jorge Garcia for speaking to me about this article. 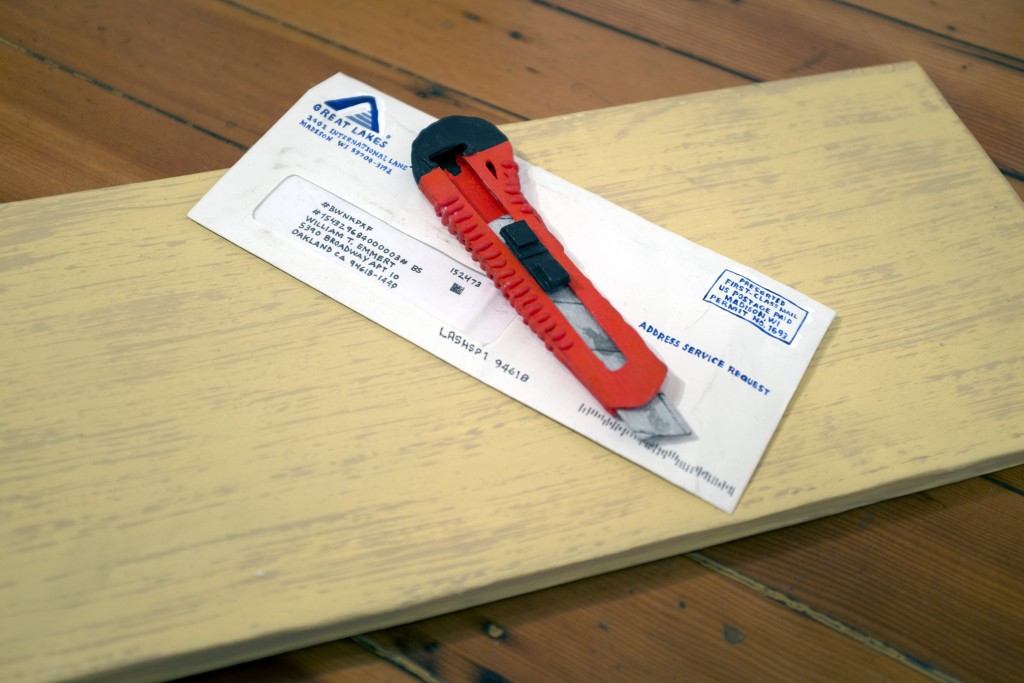 Previous post Where Is The Risk In Digital Art?