The Entropic Considerations of Luka Fineisen’s smoke and mirrors 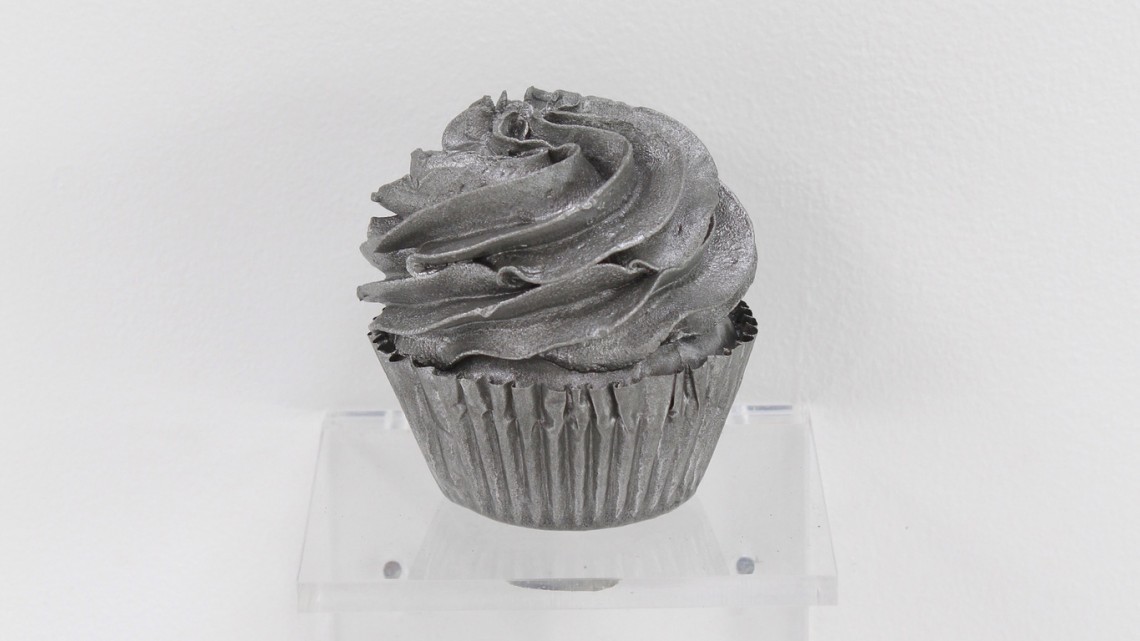 Luka Fineisen’s solo exhibition at Hosfelt Gallery greets the visitor with somber humor, accented by a stark palette in black, white, and silver. Simple objects, each with their own complex texture or detail, scatter the exhibition space, enhancing the party-like atmosphere with a tinge of stoic discontent that overshadows the speculative festivities that might have taken place. It is as if visitors might be witnessing an aftermath with relics on view as emblematic of a more celebratory, abundant time. To emphasize the narrative further, visitors could eat white spun cotton candy or black cupcakes at the reception, paired with milk or jet-black coffee. In keeping with the trajectory of her practice spanning at least fifteen years, Fineisen has created a bittersweet aura that pervades the entire space. 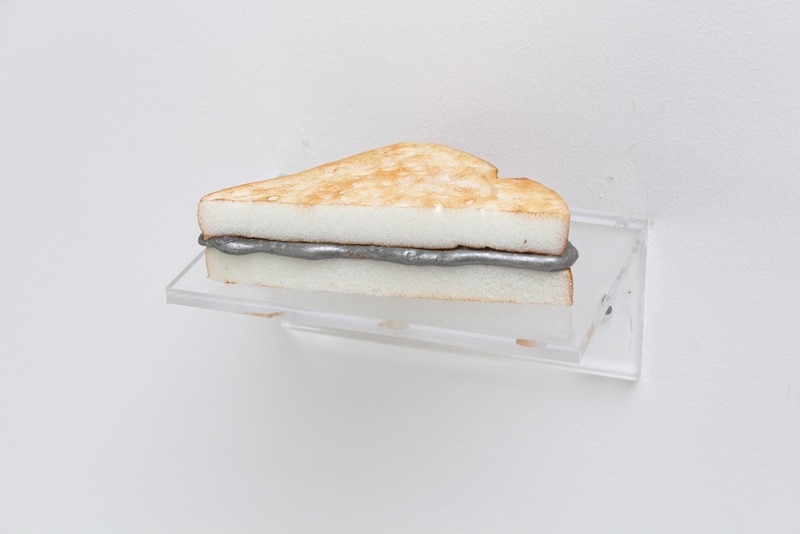 Birthdays or childhood excursions, especially, come to mind. There are also several examples of comfort foods: heavily frosted cupcakes, swirling ice creams, meringues, and other treats alongside simple meals such as a pizza slice, a grilled cheese sandwich, or mounds of spaghetti. The Cupcake piece and many others are particularly life-like and delicious if it weren’t for their white pastiness, saturated matte black pigment, or buffed silver sheen. The silver metallic surfaces, especially in Pizza lend a precious quality, like bronzed baby shoes. One quintessential food seems emblematic of the series; titled Problem, it is a replica of a grilled cheese half-sandwich—the toasted white bread seems crispy on the outside, soft and warm on the inside. The delectable melted silver “cheese” oozes from the edges. The realistic manner in which it is made tempts the viewer with longing, yet its fakeness creates a conflict for wanting something that cannot be had. A problem indeed!

A curious process that carries throughout the exhibition is the formal consideration given to the corners of almost every piece. The corners are given special attention, whether bent, melting, gnarled or highlighted, and these carefully treated edges embrace concepts of erosion or damage. Tangled corners are seen in Alleviation, a six-by-eight foot triptych of black glitter and resin on clear Plexiglas. Special attention is taken with the corner of Possibility, where a small bend in the Plexiglas edge can no longer support the pool of silver glitter that ultimately makes its way to settle in a gooey mass on the floor below. 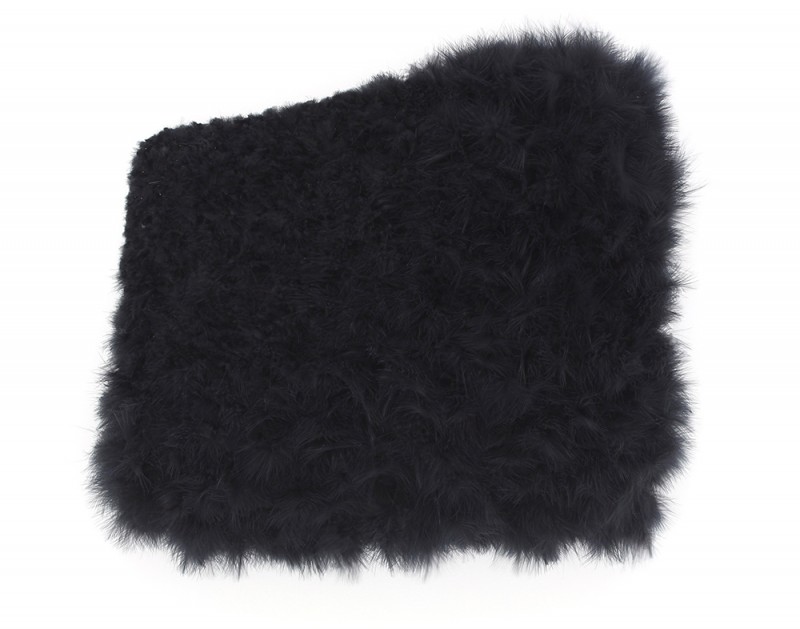 Other corners are more subtle, while ephemeral elements and movements sneak in to add another layer of engagement. A large wall relief Software, made of thousands of delicate white feathers gently rustles with every passing move. Upon closer inspection, simple breathing agitates the feathers more; the microscopic detail of each downy barb ebbs and flows as if waves are swaying anemone or dance moves are jostling the fine boa accessory for a fancy costume. Vibrant white light streams in from the skylight, casting a glowing shaft on the upper right hand corner, creating the illusion of a bent corner. A smaller companion piece, Caress, features black feathers, many of which are trimmed down in the upper left hand corner, where the gesture of cutting contradicts the natural slice of the sun in the counterpart piece. More natural phenomena are seen in the exhibition: a mysterious hazy mist wafts from underneath the walls separating the gallery space; Organic Matter II is a clear cube filled with a swirling iridescent liquid. A huge fan blows air throughout the space, agitating the piece titled Attitude, which sways precariously, although its bendable Plexiglas structure also seems to provide just enough stability to keep it from falling down. This notion of precariousness carries through many works, adding a sense of unease. 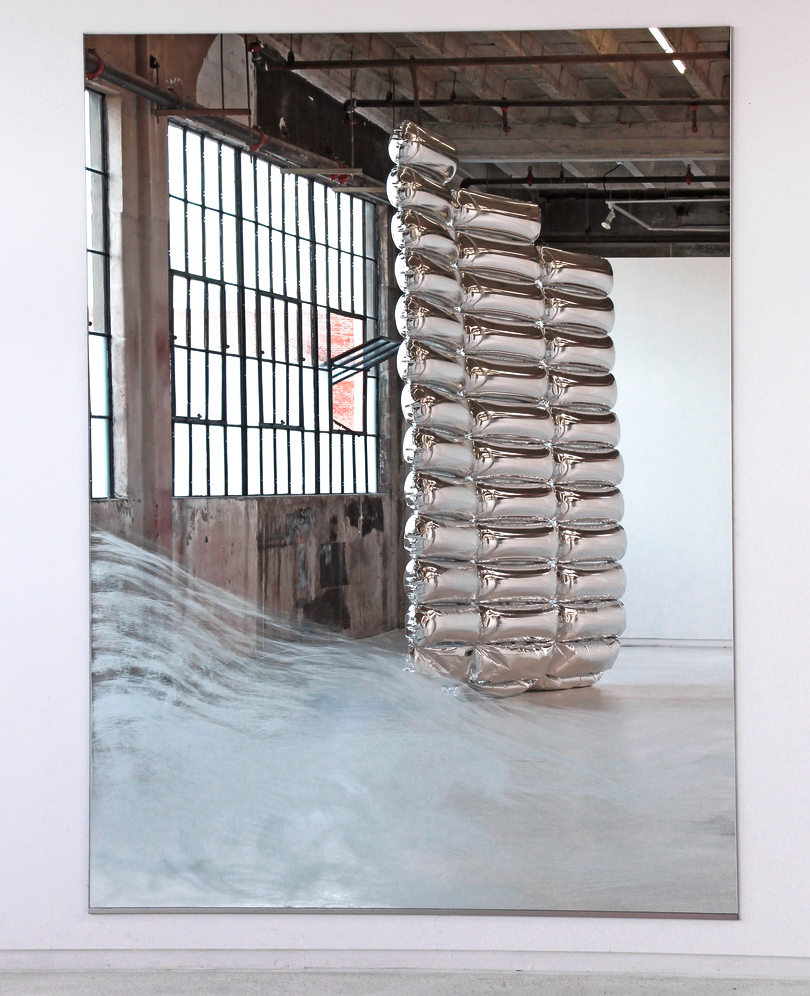 One piece anchors the entire exhibition, combining both movement and deteriorating corners: the monumental yet listless structure Wall wistfully looms and billows to and fro. It is made of rectangular, puffy metallic silver mylar balloons filled with helium, and attached to one another side by side—its reflective surface creates a carnival-esque repetition and distortion. In the lower left hand corner, a few of the balloons are in varying stages of deflation, imparting a strong sense of weariness and inevitability. When viewed at a certain angle, Wall is reflected in the mirrored piece Grounding, on an adjacent wall. The surface of the mirror is sprayed with a mist of buttermilk that conceals the lower portion of the mirror’s subject in a white film. Ironically, this is anything but grounding, but rather imparts an unsettling effect of that feels more like an illusion.

In all of the aforementioned works, there is a decided study in harnessing movement or archiving moments within a fictitious, slightly sarcastic celebratory narrative. This holds true for celebrations in general, which are rituals for milestones in life, particularly age. The concept of the birthday party may have its historic origins from a time when early childhood death was more prevalent. Other birthdays mark a coming of age, be it Sweet 16 in North America, Quinceañera in Latin America, or the Jewish tradition of bar and bat mitzvahs. The title of the exhibition, smoke and mirrors, alludes to magic tricks—that some things in life are mere illusion and not really as they seem. But in thinking about celebrating life on a much broader scale, one could consider that existential overtones of mortality linger—that perhaps life itself is one big illusion . . . or is it one big party? Regardless, a sort of “social entropy”—an erosion of norms—creeps into Fineisen’s objects, as seen in their slightly marred formal qualities where a mysterious, atmospheric space is created in between them for the mind to fill in the blanks. 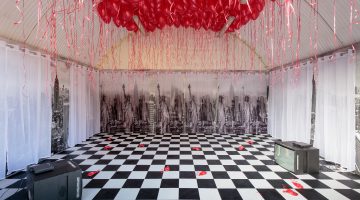 All that Glitters at the Track: Sadie Barnette’s Super