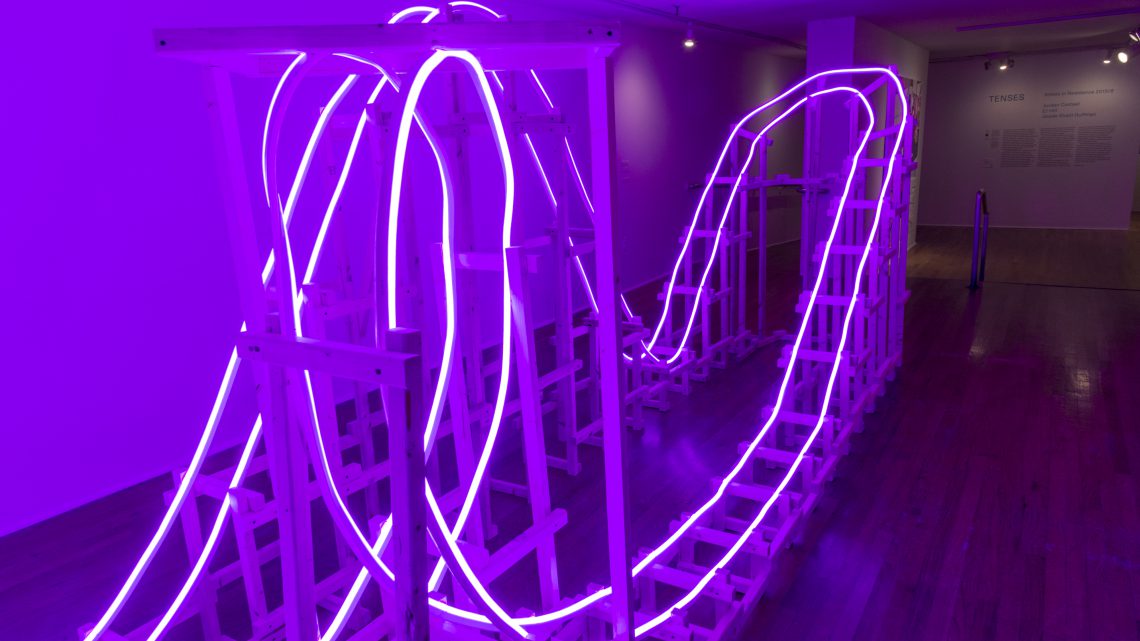 EJ Hill works through video, painting, text, and performance to forge a relationship with his audience that is both confrontational and intimate. Hill interrogates the suffering of the black, male body in feats of endurance that expose him bleeding, incontinent, and collapsing in exhaustion. As Artist in Residence at the Studio Museum in Harlem, Hill staged a performance that spanned the three months and two weeks of Tenses, the exhibition of residents’ work. A Monumental Offering of Potential Energy (2016) continues to implicate our witness as insufficient and demonstrate negligence in the decision to stand by and watch. Following the closure of Tenses, EJ Hill discussed his experience with SFAQ’s Nicole Kaack. Interviews with his fellow A.I.Rs Jordan Casteel and Jibade Khalil Huffman are available in SFAQ’s winter print edition.

Nicole Kaack: You’ve worked with sculptural installations in the past, but the roller coaster form is something much more engineered than what you have constructed before. How is this sculptural object significant?

EJ Hill: Well, it was really the first time ever that I’ve had this much time to work. Provided that opportunity, I think that…what naturally developed was something that I’ve been stewing on for a while. Roller coasters. My dream had always been to build one. When I sent photos of the original sketches for the sculpture to my mother, just a ‘look what I am working on now,’ she sent me back a photo of an old black-and-white photo that I took in undergrad in my first photography class. I took it while I was on a roller coaster. I’d raised my arms above my head and snapped a photo of the rest of the train in front. It was the first reminder in a while that this image has always shown up, time and time again: this idea of the up and down and the round and round of a closed circuit. It returns all the time for me in the form of a roller coaster. It’s just there.

So this was the perfect time to do so. I think if I had more time to develop something without any distractions, anything other than just me and my studio… [other works] could probably have been something more materially developed.

Using a roller coaster—something that you’ve been dreaming about for a long time—as the stage for your performance seems to suggest a tension between childhood and adult suffering. Are you using these structures from another time to think about things that touch us now?

Yeah, [deploying them to] think about how those things are maybe indicative of certain moments but stay forever. It doesn’t need to be a recurring theme, but one super memorable or joyous or traumatic event can have wildly lasting effects.

Or the way that, in memory, the pain and the joy are equalized in some senses, by being proximate as the most memorable events.

They are starting to, yeah.

I’m interested in the way that this ties in with the title. A Monumental Offering of Potential Energy (2016). For me the word “monumental” in relation to your pose—prone on the ground, your eyes open but unfixed—makes me think of physical monuments and memorials, and the way that those modes of honoring and remembrance can be for actions but also for people lost or passed.

Exactly. Your pose, which feels both peaceful and violent. 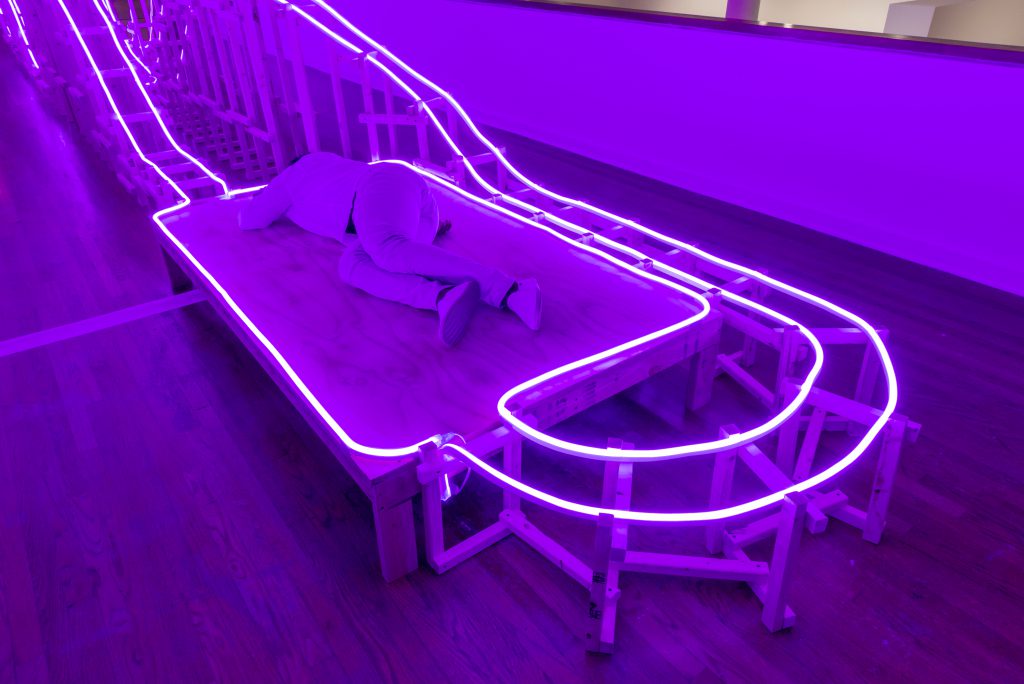 I was thinking of monuments [through] roller coasters as these architectural feats that don’t really have any purpose other than to terrify and/or excite. But they get higher and faster every year. And then there was [the monumentality of] the gesture and it’s duration. Three-and-a-half months. Four days a week. Ten hours a day. That was huge. I had never attempted anything that big before.

But to your point about the fallen ones, the people who are passed, I was definitely thinking about all of the images that inspired the piece. I was totally aware of the way my body, in particular, laying still for hours on end, eyes open, is evocative of a kind of scene that we have been overwhelmed by. Especially in the past two to three years. So I am processing all of that in my personal life, in the public sphere.

The confrontation of that image is such a point of strength. The way that the roller coaster is in the space forces you to walk down this narrow path towards it. It becomes this hallway to which you are the endpoint. There is this clear attraction of wanting to move closer to see what you are doing, but once you get there, the space is so close and it is uncomfortable to be so near to someone who is prone before you. It gets under your skin. How was it for you experiencing others coming into the space, observing you?

Well, a lot of people would stop once they would see me. There was sort of an excited, “Oh my god, it’s a roller coaster,” and then I would hear their steps get closer, and they would see me and stop. A lot of people would turn away, walk away, never really cross that threshold. Some people would wait a little bit, just to suss out what they were feeling and then would, after maybe 30 seconds or so, come around. I’m a firm advocate of people having their own experiences. And if that means pulling out and checking out when something becomes maybe too much or even pushing when something is not enough… I would love for everyone to be able to come at it and experience it wholly and fully, but if the apprehension or fear or discomfort that arises when seeing that image drives someone to walk and deal with it in private, I feel like that is them being present with it.

Did anyone demand more of the performance?

…Once they have the reassurance. When I first started to think about your work and contextualize it for myself within your creative history, I thought that, compared to your other performances, this felt peaceful.

I’ve often said that while a lot of my performances are aggressive and kind of intense, I believe that I am being aggressed upon and I’m reflecting that back out onto the world that puts it onto me, onto my body. So, it’s not an energy that is creating a new aggression.

Completely. In other performances, like Tell (2013)—where you took a vow of silence for a month and at the end of the time screamed until you were hoarse—you are such a strong presence, one that has a visceral effect on someone else’s being in a space. This is different—it has a slower effect on a viewer.

What’s interesting is that both this work and Tell came out of a severe need and desire to protect myself and just pull out, pull away. I could continue as I’ve been doing it as a fully engaged, present person, or I could create these conditions for myself that allow me to take a fucking break, to pull far, far away, because if I don’t pull away I’m going to fucking lose it. It was a collaborative effort [with the museum]… to make sure I, along with everyone else, remained physically and emotionally safe. It was a social transaction where I literally asked them, “Just take care of me. Please, take care of me. Because I am breaking apart.”

This new work allows the space for you to take the time and the quietness that you need, but in the same way I wonder if it doesn’t also create a space of quiet and thought, a means of isolating that image of the fallen, black body and taking a moment to set it apart, nurture it.

I was really conscious of having something else—in this instance, the roller coaster, a brightly-illuminated, glowing structure—as the backdrop of that image, something that sets a scene that is never ending, but very balanced with its ups and downs, because I think that’s universal. I am starting with me, I’m starting with my experience, and then offering a different image to what we’ve been used to seeing. Not one that is particularly happy or blissful, but that’s an alternative to the really dark, traumatizing images that we have been accustomed to… It’s like queering that image a little bit, taking it, flipping it through my own filter, and seeing what comes out.

I’m stuck on the idea of the roller coaster as this process of being able to re-experience the same thing over and again, but you change with it every time. The experience can be anticipated in certain ways, but in other ways it can’t be.

It’s such a crazy thing. You do it, for what? Why?

It’s about the closeness of terror and pleasure. We do it because it scares us, but being scared is somehow what we get joy out of?

I think that is why I was OK when people would stop and walk away. Because they were responding to that maybe fear or discomfort or whatever it is. I was totally OK with that. That thin line between fear and pleasure. Maybe toeing that line just reminds us we are still here, we are still alive, we can still feel things. There are other ways to achieve that I’m sure, but my way is to get as close as I can to it and back away.

Next post Rudolf Frieling: In Conversation With Leigh Markopoulos