‘You can’t do that to them,’ the wiser, older Architect said., Marc Horowitz at Ever Gold [Projects], San Francisco 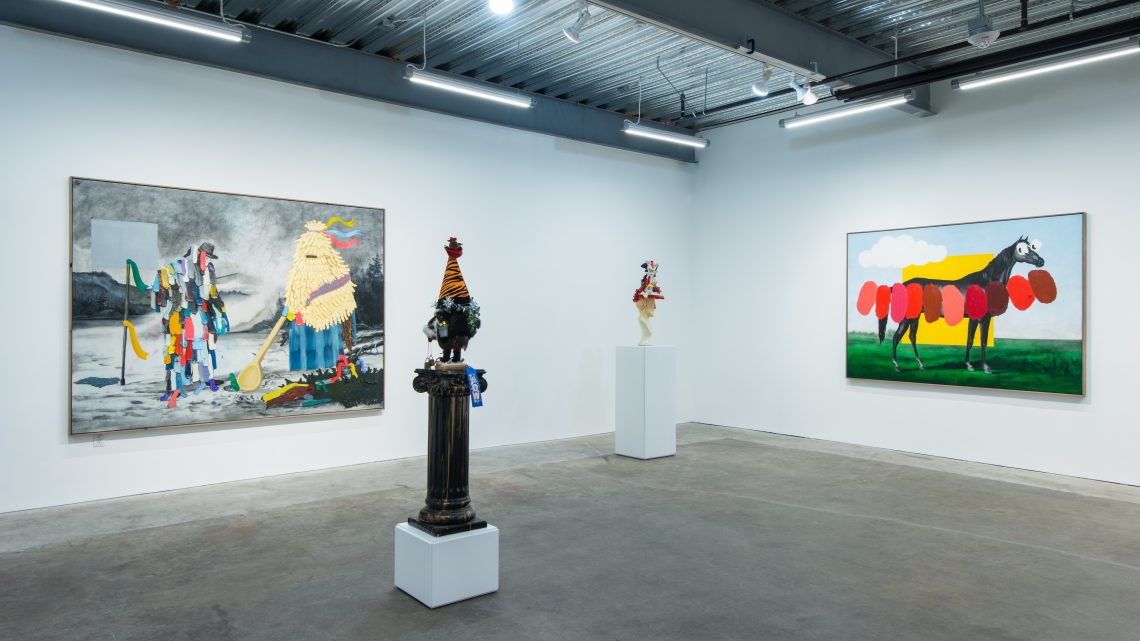 Ever Gold [Projects] and Marc Horowitz present a new series of paintings and sculptures that explore the idea of time-based glitches and how a glitch can occur in lived experience. A glitch can be mundane—like the malfunction of a screen or speaker—but the time-based glitches Horowitz refers to are disorienting, creating rifts in time, space, and perspective. The works are designed to demonstrate the way in which a glitch—typically considered a mistake—might produce new spaces and new feelings with unexpected value.

The paintings begin with underpaintings replicating prints by New York-based mass printmakers Currier & Ives, active in the 19th and early 20th centuries. These underpaintings—which reference the very early conception of the American dream, the idea of manifest destiny, and the beginnings of American exceptionalism—are then overlaid with disparate forms and areas of color. The sculptures exhibit a similar approach, with the artist taking the traditional sculptural portrait format of the bust as a point of departure and creating an unexpected composite through the addition of new forms and materials.


Marc Horowitz (b. 1976) is a Los Angeles-based artist working in painting, performance, video, photography, and social practice. In a practice that combines traditional drawing, commercial photography, and new media, Horowitz turns American culture on its head to explore the idiosyncrasies of entertainment, class, commerce, failure, success, and personal meaning. Using visual puns, large-scale participatory projects, and viral social pranks, Horowitz creates environments of high energy that lift the most mundane to the status of grand event in complex interplays between subject, viewer, and participant. Horowitz holds a master’s degree in Art from the University of Southern California, and bachelor’s degrees in both Art and Marketing from San Francisco Art Institute, and Indiana University Kelley School of Business respectively.

Horowitz has had solo exhibitions at China Art Objects in Los Angeles, The Depart Foundation in Los Angeles, Johannes Vogt in New York, The Hayward Gallery in London, and at New Langton Arts in San Francisco. He received a project grant from Creative Time for their first online-based project. His work has been featured extensively on local and national television including ABC News, NPR Weekend Edition, CBS Inside Edition CBS, CNN American Morning, and on NBC’s The Today Show. He has lectured at The Hammer Museum in Los Angeles, California Institute of the Arts, Stanford University, and Yale University. He has taught at the University of Southern California and developed a course in Post-Internet Art at Otis College with his partner, Petra Cortright.

Where am I when I’m not in reality or in my imagination?, 2017. Oil, oil stick, watercolor, and charcoal, 65h x 45w inches. Courtesy of the artist and Ever Gold [Projects].

Next post Genesis Breyer P-Orridge: In Conversation With Dean Dempsey