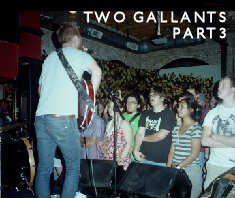 The days slipped quickly past us as we became more and more transient – so part four is a selection of footage from New Orleans to Tucson. As we entered the deeper south the air became thick with swamp air as well as my subconscious awareness that I was entering the south – a part of good old American that this liberal traveler was not familiar with. Thoughts of repression filled my mind and a sadness that although much has changed a lot has not. As I sit in the SFAQ office in the Tenderloin of SF and watch the local favor walk by I am again reminded of this. I am scared for us, for you, for me, for our county, for our world. This is why artistic expression and understanding others is so important these days (except tea baggers). Inclusion is the solution. Enough of that for now.

In New Orleans we played a generator show on a Levee on the 9th ward next to the Mississippi river. I’m still covered in mosquito bites – but nothing compared to Tyson’s back that looked like a pincushion. There was something very special about that night, including the 1/2 mile load in over wet grass. The next morning we made the long trek to Austin for another sold out show and boy it was hot. The journey to Tucson was a little jarring as we got stopped at an INS check point and being from California the dogs started barking (something we were prepared for) which ended up in a van search with empty treats of Jail…but we made it through by thinking on our feet. In Tucson we stayed at the haunted hotel but there were no incidents. The 14 hour drive back to SF the next day was crushed by Adam who champed it. The next part of this series will be of the two sold out shows at the Independent in SF. Part six will be a collection of photographs from my film camera that I was using.

Tyson and Adam started recording their new album over in Oakland today and the SFAQ crew is preparing to hit the road again down to LA for the Fountain Art Fair – it never stops.

Hotlanta – another sold out show – a pretty amped crowd. Two fights in the pit, people breaking bottles, and someone even got married on stage – however we figured out later that it wasn’t the first time that this “couple” had done something like this – so it doesn’t really count. Ran into some SF people as well which was a nice surprise. Enjoy this next video documentation installment. We hung out in New Orleans last night and played a generator show on one of the Levee’s of the 9th Ward. Pretty epic. a little taste of that coming later. Just got into Austin for another…sold out show.

Philly treated us well and instead of sleeping on the floor, like the night before, we stayed at the “posh” downtown Marriott hotel which made it hard to get up for the seven hour drive to Durham, NC.

Enjoy this next video documentation.

SFAQ Editor Mr. McClintock jumped on Two Gallants’ Fall 2011 tour half way through in NYC. This is the first of some avant garde documentation of the journey back west to San Francisco for two almost sold out nights at the Independent.

After waking up late in NYC we slowly made our way up to Boston. The local “Bro’s” came out in full force with fist pumping action in the front row to Two Gallants energetic performance which ended with a 6 song encore.  After getting lost in some part of Boston we ended up at an amazing couples house who run  Band in Boston. We just made it to Philadelphia after over shooting on the NJ Expressway by 45 minutes for a sold out show.