“Red” at the Berkeley Rep 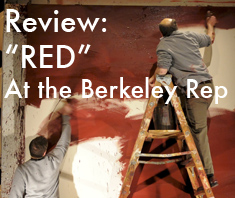 Playwright John Logan was in attendance the evening I went to see “Red,” the Tony Award winning play on the inner struggles of painter Mark Rothko. He fielded a question and answer session after the play. Turns out the play’s inner directive isn’t about a painter mentoring his assistant, the intricacies of the creative experience, the foibles of the artworld, or the ethics of exhibiting paintings with a spiritual inclination in New York’s fanciest restaurant. No, it’s about a father and son relationship.

There are only two characters in the play, Rothko and a newly hired studio assistant, who remains for two years. In 1958, Rothko received a mural commission from architect Phillip Johnson, who was designing the Four Seasons restaurant in New York’s Seagram Building. Pop Art was just coming into fashion. Rothko had by now established himself as one of the leading Abstract Expressionists (a term he rejected), but was wrestling with mainstream acceptance and opportunity, and a new generation of painters nipping at his heels.

Just as Rothko proclaimed his need to “crush” Cubism, Warhol and his ilk had to dispose of him. A new generation was maturing, and his studio assistant represents this, mirroring the painters’ self doubts.

Staged as a father/son conflict, the play also alludes to the growth of the individual, youthful folly and aged wisdom, mentoring and apprenticeship. The fifty-year old playwright also uses the play to mark his own progress as a creative individual.

A generation apart, Rothko bemoans the lack of depth in the newly arrived youngsters literary background, but by the time of his departure the apprentice has obviously been schooled in such matters. The once timid assistant gains in maturity through his exposure to the master, eventually asserting his growing independence, exemplified by his selection of Chet Baker on the studios aging phonograph, rejecting the classical music Rothko favored.

It’s a Oedipal father/son duel, underscored by the fact that the apprentices’ father and mother were both brutally murdered when a youth in the rural Kansas countryside (those responsible never found). Scarred by the red of their blood and the mutations of the color as it clotted, he shares Rothko’s passion for the color, which the painter uses as a defense against his distaste of black, signifying death. The fulcrum of the play has the two furiously priming a canvas in unison (in red, of course), confronting the canvas and each other.

Changing his name from Marcus Rothkowitz to Mark Rothko, the painter became a self-created entity encumbered by a disregarded heritage, compounded by a growing unease of his mainstream acceptance and financial success. Following the ill-fated Seagram commission, he divorced, suffered ill health, committing suicide in 1970.

Schooled at Yale (where he was beset by anti-Semitism), a contributor to leading artist periodicals of the day, Rothko was well versed in matters literary and mythological.  Friedrich Nietzsche’s “The Birth of Tragedy,” became a compelling interest during this period, Rothko’s own tragedy was compounded by the conundrum that while the painted works began to extoll a growing spiritual allure, their creator became increasing bereft of the same.

Suffering from self-doubt over accomplishments others considered fraudulent, sunk him deeper into seclusion. His long time friend, Clyfford Still, disavowed him during the Seagram commission, accused him of bourgeois aspirations, adding to his growing discontent. Like other “garret artists” of the past, often beset by drug or alcohol problems, Rothko, in classic bohemian fashion, shut himself off, becoming increasingly out of touch with contemporary shifts in cultural thought.

Eventually, Rothko rejects the Seagram commission, returns the funding received for it and begins planning the Rothko chapel in Houston over which he can exert more control over the environment. Ironically, the completed Seagram Murals arrived in London for exhibition at the Tate Gallery the day he committed suicide. It was here that playwright Logan first saw many of the works some thirty-five years later, germinating the idea of the play.

Logan went on to open the play in London in 2009, taking it to Broadway, where he received the Tony, Drama Desk Outer Critics Circle and Drama League Awards. He is the screenwriter for such motion pictures as “Hugo,” and “Gladiator.” As related at the Q&A, boring the audience is his greatest fear. Hopefully, the warm reception he received at Berkeley Rep concluding the ninety- minute work, laid some of these misgivings to rest.

All images courtesy of the Berkeley Rep Theatre