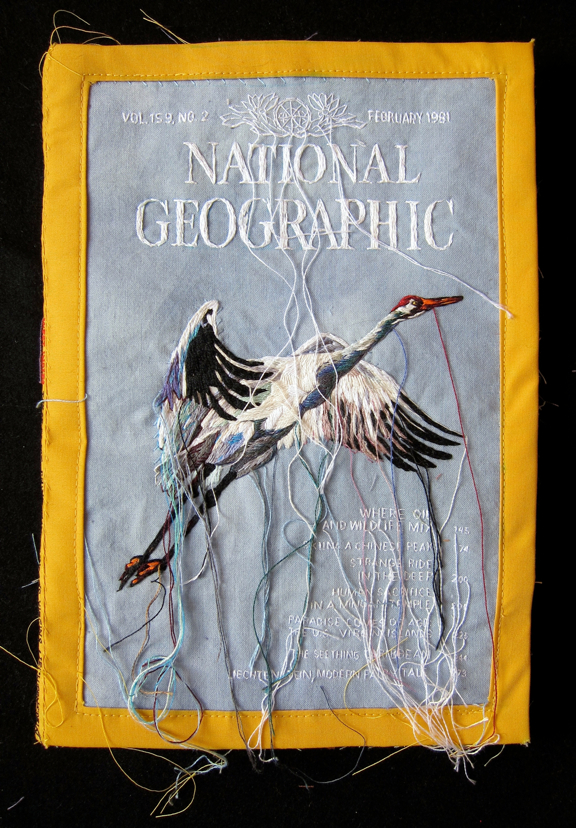 I have been meaning to post about the current show at Jack Fisher in 49 Geary for a while since I dropped off some SFAQ’s to one of the friendliest galleriests in that building. When I am doing a distribution run for the publishers of SFAQ I’m usually in a rush (being a newspaper boy is not the most glorifying position but doing hard labor feels good) but I spent about 15 minutes staring and examining  Lauren Dicioccio’s new (and some older) work which  is quite amazing. Through disguise of every day objects that seem concrete and which already have such a stigma behind them  (NY Times, film canisters, water bottles, playing cards, dollar bills…) her work makes you stop and re investigate ones connection to the objects and in the process, makes one think about the relationship we all have to such powerful everyday objects. Perhaps this process points out the holes or the gaps that we overlook on the day to day because if we did we would all end up going crazy and really want a social revolution. At one point I think this was what most art was supposed to do – but who can resist glorifying such objects such as Koons does. After writing this I read her artist statement and I’m not far off – perhaps I am a little more cynical about life… but…I mean well.

Also it’s nice to see the work mainly shown on large pedestals with the pieces grouped together to form multiple narratives around the work which I agreed with Mr. Fisher is a nice change from the normal formalities of what exhibitions tend to be (especially at 49 Geary)

“My work investigates the physical beauty of common mass-produced objects as they approach obsolescence. Ubiquitous items of day-to-day life – in this case, paper currency- are quickly becoming cultural artifacts as these media change modes due to technology and the hope for a less wasteful lifestyle. Approaching sculpture, painting, and tedious handicraft with an air of lightness, I aim to remind viewers of the importance of our relationships with these simple but intimate objects of everyday life and to provoke a pang of nostalgia for their familiar physicality.”

Go check out the show as it ends September 8th