I don’t believe in the Mayan Apocalypse, but I’ve been looking forward to it (and its parties) since I first learned about it two years ago. The end of the universe is appealing because it turns up the intensity of what could be our final hours, and either everything you do has the import of finality, or you can party like you’re living in a pre-AIDS world. Here’s a short primer on some endtime theories, and my favorite modern and contemporary celestial and Apocalyptic art.

The Mayan calendar is based on numerous cycles, including a 365-day solar year, and a long count of 52-years necessary when their smaller calendar’s mathematical cycles reset to zero; (our Gregorian calendar resets to zero on January 1, year whatever.) A longer unit of measurement, a “b’ak’tun” of approximately 395 years will reset to the next, 13th, b’ak’tun on the winter solstice, Friday, December 21. Yale’s Professor Emiritus Michael D. Coe popularized the concept that at the 13th b’ak’tun, “Armageddon would overtake the degenerate peoples of the world and all creation,” in his 1966 book “The Maya” (149).

The planets, Sun, and the 12 constellations that lie in an ecliptic formation, popularly known as the zodiac constellations, lie in a relatively level plane with one another. The Sun is moving from the Pisces constellation to Aquarius, where it will process, appearing to move backward due to the Earth’s axial wobble. According to my new favorite website, 2012apocalypse.net, the ruler of Aquarius, Uranus, will pour out the Aquarius’ totemic water of knowledge onto the human race. But, for some reason, the world has to be destroyed before we can appreciate the new age. If we are making a transition from the age of Pisces (representative of Christianity), then hopefully the people who are saved from Uranus’ flood for the Age of Aquarius will be the hippies.

Planetary alignment, along with the dirty deeds of the Large Hadron Collider have purportedly also caused a black hole at the center of the universe, according to scientific bastion “Earth Being Destroyed!” The black hole is supposed to reach critical mass on December 21.

This sun is due for a sunspot reversal, which, according to NASA, happens every 11 years, as well as a magnetic field reversal, which occur every 5,000 to 50 million years (2001). As the magnetic field changes, sunspots will appear. The 1996 book “The Mayan Prophecies : Unlocking the Secrets of a Lost Civilization” by Adrian Gilbert and Maurice Cotterell are credited as the first geniuses claiming this solar event will cause flooding and the Apocalypse. Solar flares didn’t destroy the world 11 years ago, but conspiracy theorists have taught me that all of my expectations and assumptions are based on government lies. So, it might happen?

DMT proselytist and demigod to crunchy fringe groups Terence McKenna believed that the I Ching could predict the Singularity, which is when technological intelligence exceeds human intelligence. Common fears about the Singularity include an existential crisis for all of humanity or death by unfriendly artificial intelligence.  Hopefully, however, the singularity will cause a transcendent state and humanity will move beyond fear and wanting. McKenna used the I Ching’s fractal patterns to create a computer program called Timewave Zero, and its output is consistent the dates of the dissolution of empires. According to Timewave Zero, the world will end in 2012. I’m focusing all of my best vibes on a best-case transcendent scenario, with machine elves dancing all over the damn place.

Next post Henry Gunderson's “ Apocalypse Shelter” at Ever Gold Gallery 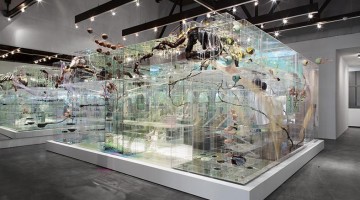