James Cordas: “a, dog I’m holding undermy arm with Its head pointed behind me” 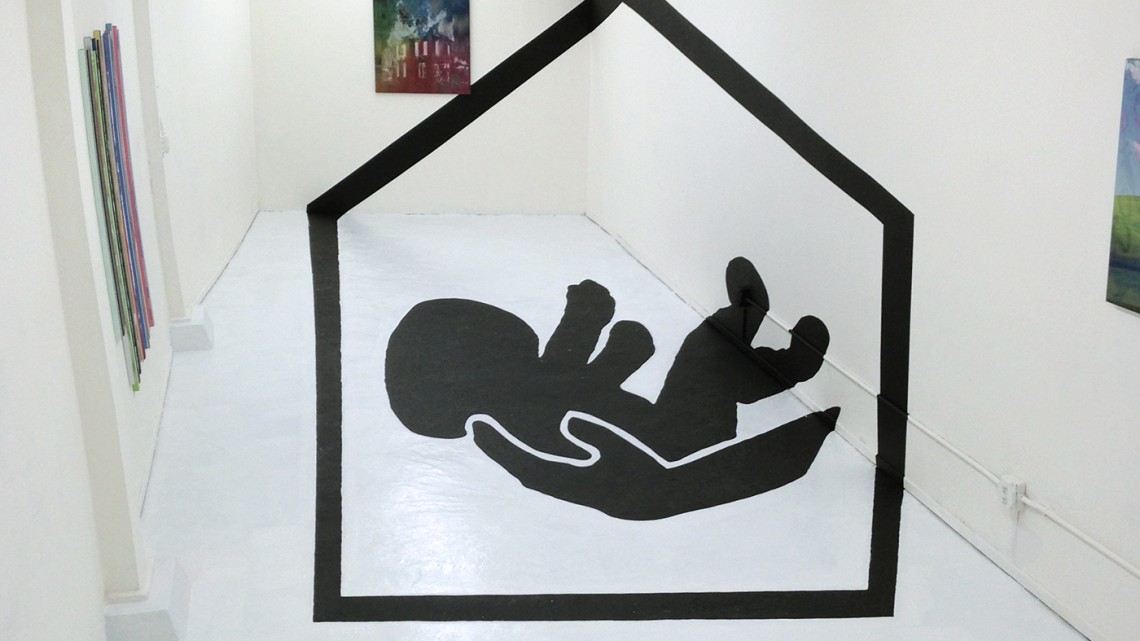 An industrial engine-like drone fills the space of the gallery as you descend the stairs. The resonating sound builds to an unsettling level, and then begins to fade. Ceiling lights flash, then the room is dark for a moment. The lights and the sound flicker back on and continue to paint the space with an ominous tone. A huge mural dominates the floor and wall with a Safe Surrender emblem that is used at police and fire stations to note their site as a place where children can be abandoned. The piece dictates a dialog replete with issues of protection, survival, and, of course, safety. Surveying the works, the over- arching theme is apocalyptic, juxtaposed with a touch of pseudo joy. 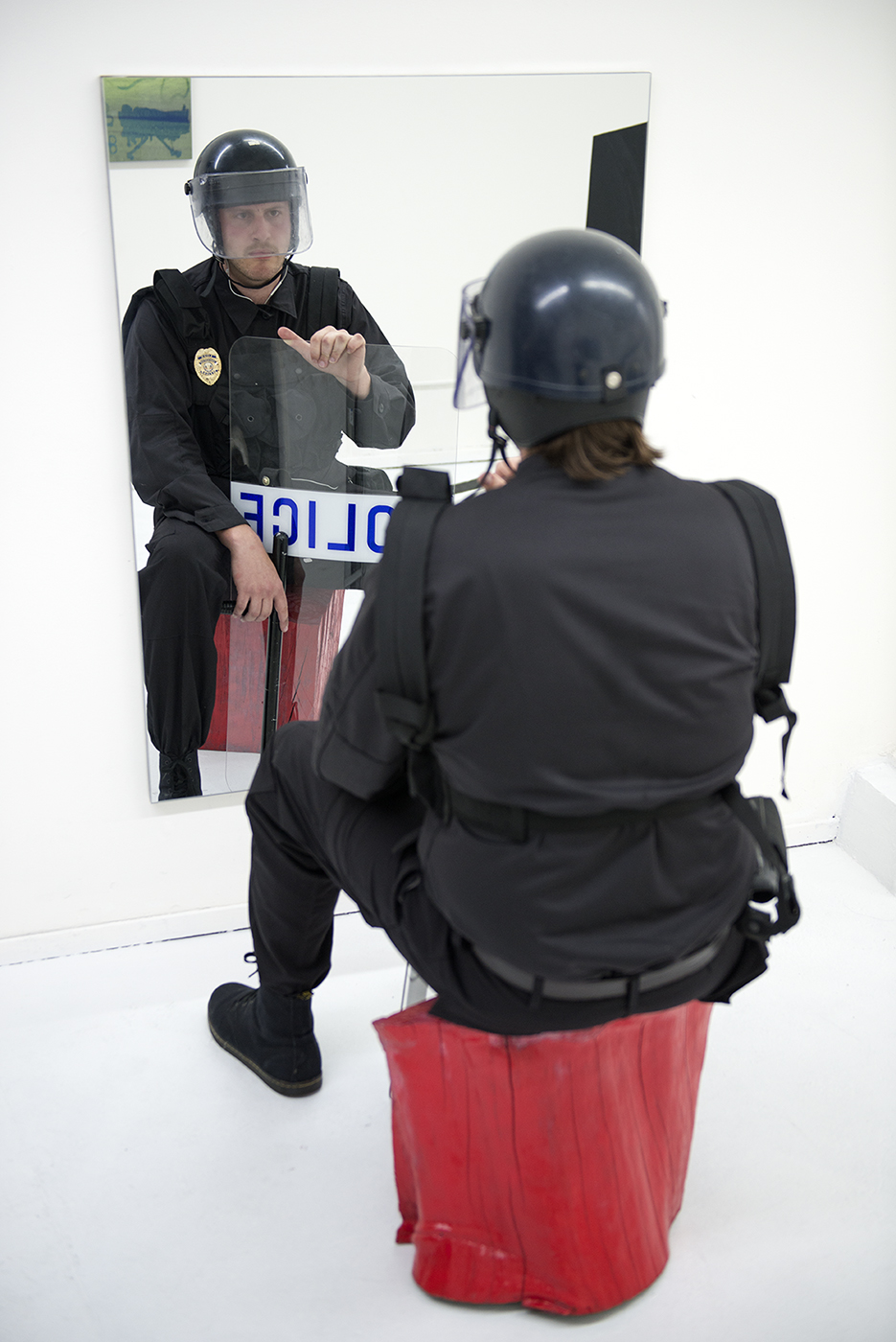 The works in the show are generated in tandem with Cordas’s poetry writing practice, taking intuitive cues and thoughts from language then transposing it into two-dimensional visual works, performance, sound, and light pieces. The light work most abstractly references the melodramatic poetry that he has been writing lately: 8 Poems is generated from Cordas recording himself and poet Zoe Brezsny reading four poems each. He then augmented his voice with software to such an extent that the words are completely abstracted into beats that control when the lights flicker and turn off. For him, the lights can be thought of “like a light coming from a mouth every time someone wants to make a sound.” Similarly, the sound piece Vampire is created from the sound of a cruise ship engine in conjunction with poems written with audio panning software. Cordas has been using technology to abstract language and sound for the last few years, and this show is surprisingly representational and narrative compared to previous works.

At the opening, the piece titled Contemplative Cop (8ft. Cop) featured a live “policeman” in full riot gear sitting on a large segment of a red painted log, staring at himself in a mirror. Days later, the gear the policeman wore in the performance piece is folded neatly on the floor, implicating visitors as they view their own reflection in relation to the garb nearby. It is possible that the uniform is here for viewers to don themselves, but it is most the relic of an aftermath of an event, symbolic of a general inability to engage with life in ways that really matter because control by others inhibits the freedom to do so. As Martin Esslin noted in his 1960 essay The Theater of the Absurd: “While the happenings on the stage are absurd, they yet remain recognizable as somehow related to real life with its absurdity, so that eventually the spectators are brought face to face with the irrational side of their existence.” Just like this kind of theater, Cordas is strategically pointing out the problems in our culture, and as Esslin continues, “the Theatre of the Absurd will, in the end, be found to reveal the irrationality of the human condition and the illusion of what we thought was its apparent logical structure.” 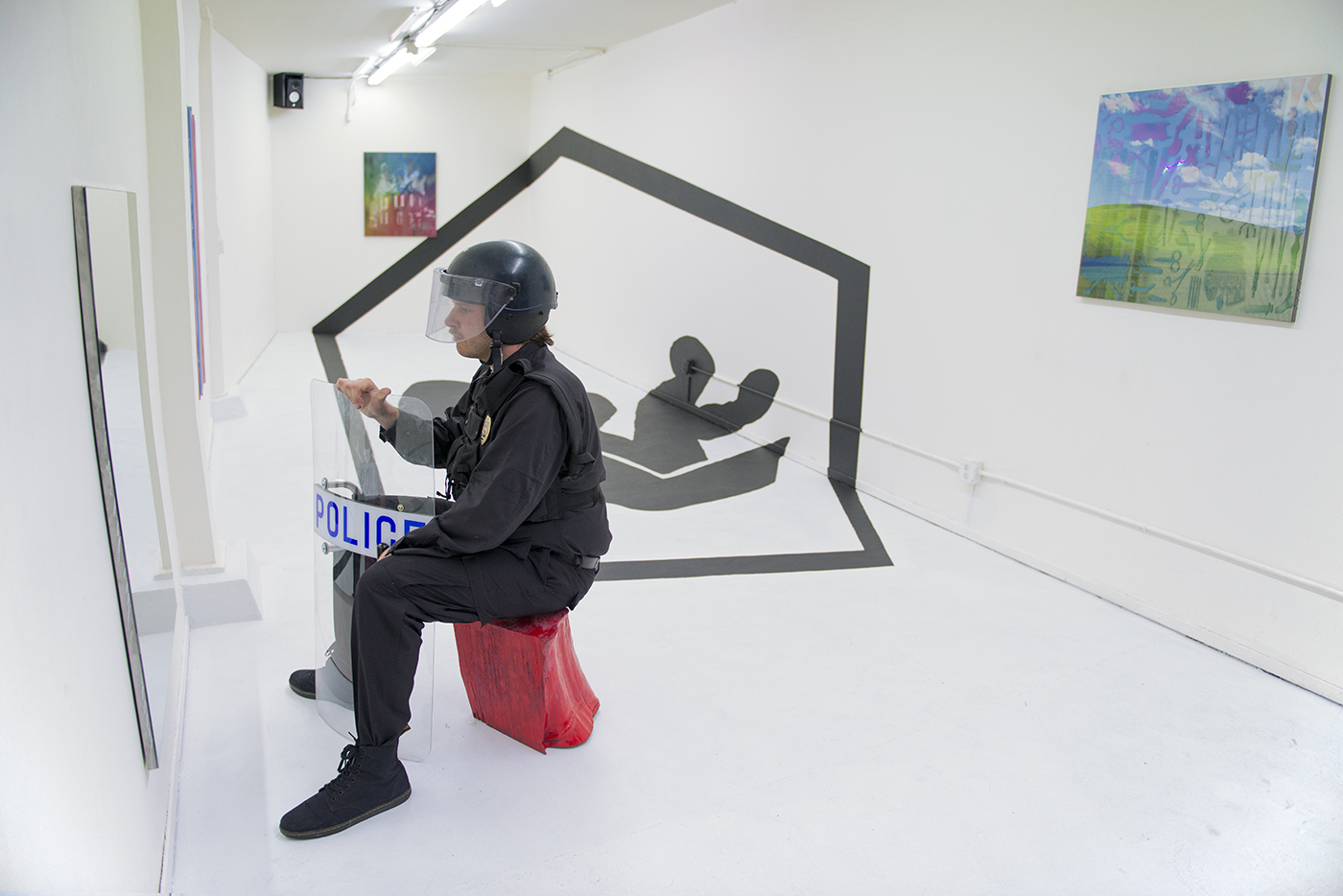 James Cordas, “a, dog I’m holding undermy arm with Its head pointed behind me,” installation view, 2015. Image courtesy of et al. gallery and the artist.

Likewise, Cordas’s use of shapes and colors throughout the rest of the exhibition act as humorous counterparts to the dystopic imagery portrayed, reiterating the twisted, hard, and unjust reality that occupies so much of everyday urban life. The piece Full Spectrum Suburban House Fire features a scene of a burning house, which would normally instill acknowledgement of a tragic situation, yet the bright rainbow colors of the image imbue a contradictory sense of pleasure, or perhaps even hope, onto what would normally be a harrowing experience. It is hard to turn away from the pleasing colors that blend into one another creating a visually stimulating color field. The Burning of the House of Lords and Commons by J.M.W.Turner has a similar effect, as do real burning buildings that attract spectators like moths overcome by the light of destruction. Cordas lives in Oakland, where there was a recent fire at a large warehouse that took the lives of two residents and damaged dozens of studios and independent/anarchist printing houses. Despite the raging beauty of flames, its power is always most evident in the loss that it leaves behind. 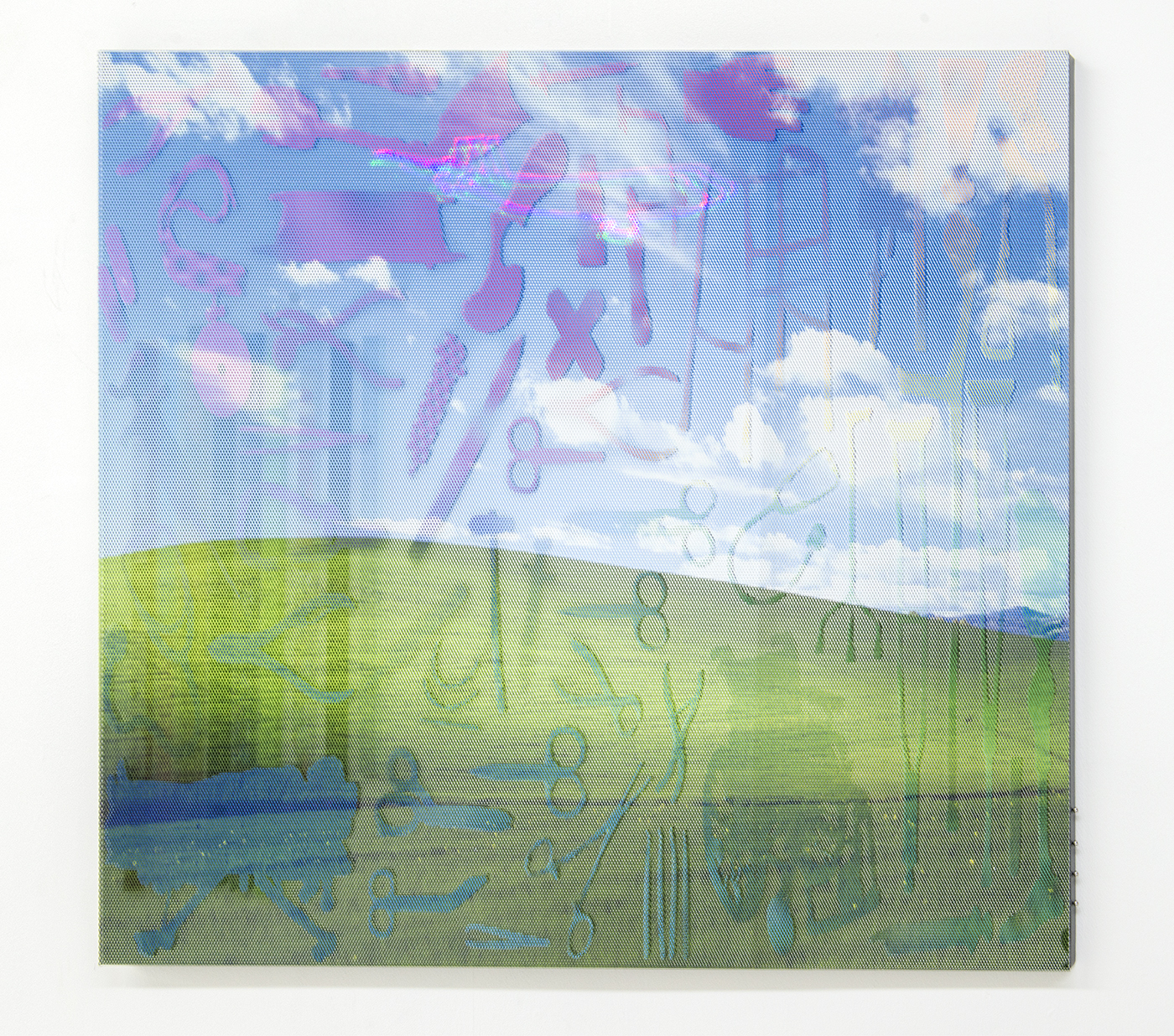 Across the room, Sharp Park features a ubiquitous rolling green knoll and blue sky behind lavender and light blue silhouettes of hospital tools, including scalpels, pliers, a gurney, gauze scissors, and hypodermic needles. A green and pink laser image of an airplane spinning out of control is projected onto the mirrored surface. The image of the hill with its dreamy sky full of potential is the default screensaver setting for the almost obsolete Windows XP operating system (which Windows officially titled Bliss). By appropriating this image, Cordas offers the viewer “a default happiness,” as curator Jackie Im noted. However, one cannot see the blissful knoll without first looking through the overlay of traumatic references to disaster and harm. As the lights go off in the gallery again, the airplane can be seen spinning on an adjacent wall—a quirky technological gimmick that dazzles—again striking an absurd chord. The lights flicker on again and the drone continues. 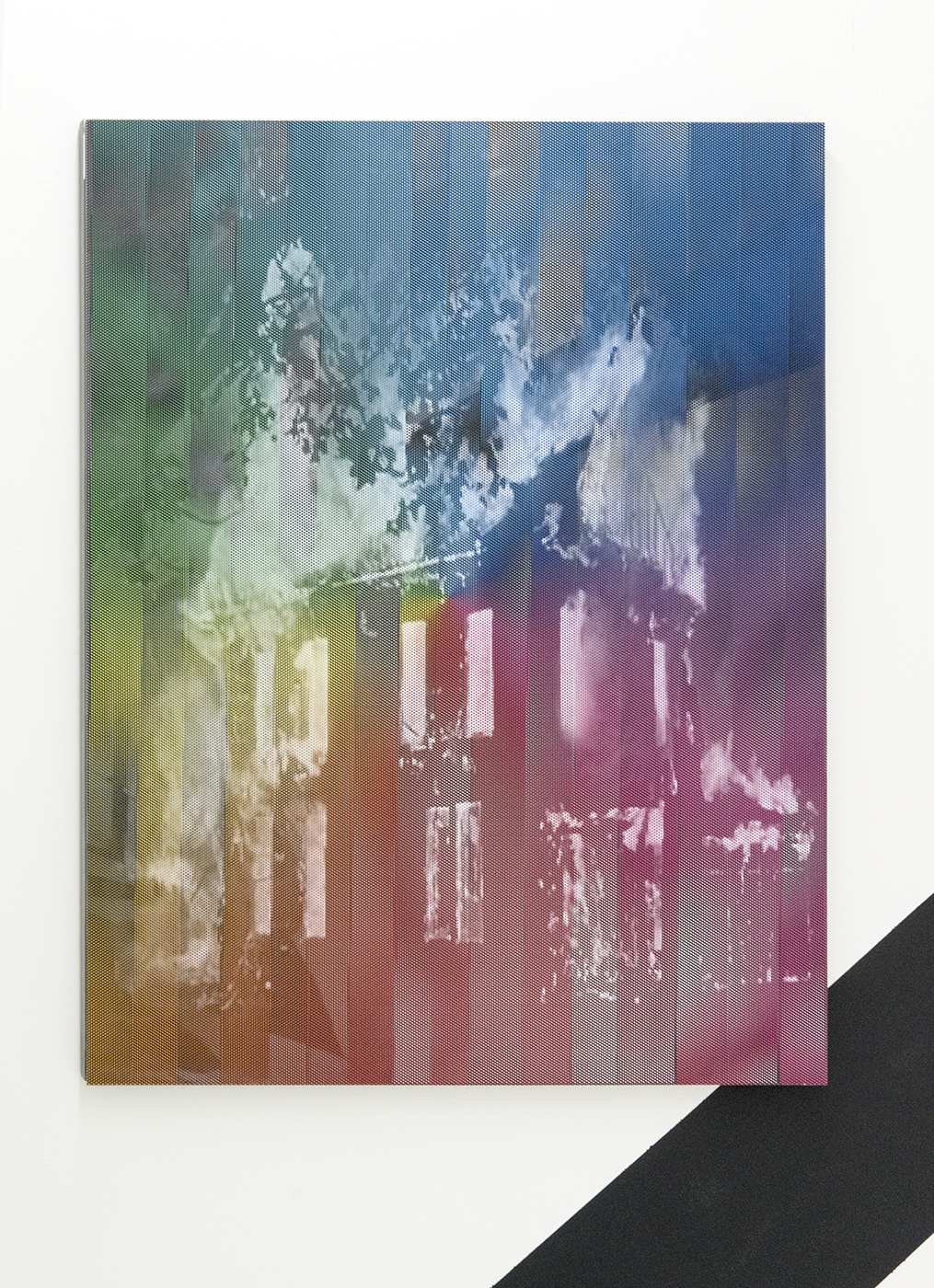 Next post Richard Hell: In Conversation With Dean Dempsey