Oh hey, hi. You can take all of my money. Sotheby's Tobias Meyer via the tragically named Sip with Socialites.

I never understood following sports I didn’t participate in until I watched an art auction online. It makes sense: auctions move fast; prices are volatile and unregulated; auctioneers drive up prices by “spotting” fake bids, known as “chandelier bidding;” and my favorite artists are like star athletes, with their perceived importance in the hands of art valuations (potential value) and selling prices. Phillips de Pury & Company employee and charity auctioneer CK Swett and Sotheby’s Worldwide Head of Contemporary Art Tobias Meyer have the kind of charisma that can lead men to war.

Sotheby’s and Christie’s offer streaming video of their art auctions for non-bidders. This is, for a plebeian like myself, an opportunity to see the wizard behind the curtain that I might not have ever gained access to before the internet age. The online auction shows the viewer art for what it really is—a commodity. It is critical to demystifying the international art industrial complex, as its culture and economy trickle down to the smallest commercial galleries. Though the major auction seasons are fall and spring, I think this week’s London auctions may be a litmus test for the season and the year. At the end of 2012, Post-War and Contemporary artists sales were up, (with numbers obviously inflated by buyer’s premiums which add an average of 15% of the hammer price to the final sale, with the premium going to the auction house), and, last week, an exposé of the market’s multitude of sins by Robin Pogrebin and Kevin Flynn was published in the New York Times. Let’s watch, sports fans:

If you are into glue (see game below), watch this auction rather than the Impressionist and Modern auction happening simultaneously. See Paul Delvaux’s Surreal T&A and René Magritte’s disembodied faces.

Feel free to play this “Withnail and I” inspired drinking game along with me and my best friend, Daniel Klein. This informative game was created by Daniel, so if you die, you know who to curse on your way out:

Every time a lot get’s bought in (fails to meet the reserve and doesn’t sell): take a shot.

For every Impressionist: a glass of Sherry.

For every post-Impressionist: Absinthe.

For every Suprematist: drink vodka.
For every Dalí lot: sniff glue.
For every Basquiat: chug rubbing alcohol.
For every Pollock: vomit.

Every time Larry Gagosian is the underbidder (second highest bidder): pour some Olde English on the carpet.

Suicide version: every single time a lot meets its reserve (the seller’s minimum price): toss back a PBR.

4:20 friendly version: For every mention of “gestural brushstroke” or “remarkable patina”: one bong rip. 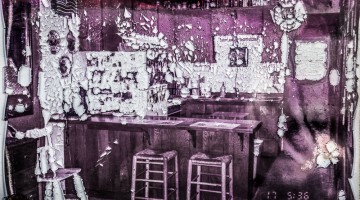 The Anti-Genius, Or, Why Do Curators Talk Like That? (Pa