“Intimate late-night conversations among friends often find drunken answers to everything, and are replaced in the morning by a hazy joyful mist where the specifics are all forgotten. Throughout my five years at Objectif Exhibitions, I shared many of those nights with the artists I’ve commissioned here to write and perform the songs on this record, and it is this mix of desire and enthusiasm we’ve put into making this record. Adding one final adventure to those moments, Behave Like an Audience is another last last drink. . .” 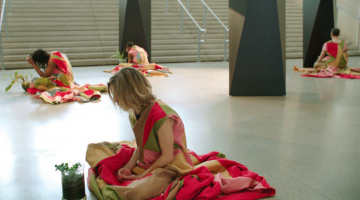