I’m not sure whether to be happy or sad that I am getting older within the arts. On one hand I feel like a lion losing his teeth and that my natural mindset of ‘nothing is good enough’ is fading. However, on the other hand, I feel time has made me more susceptible to wanting to give everything my all and appreciate (genuine) attempts, even if they are followed by failure. The recent show at the White Cube is showing my age because I’m not feeling my youthful anger, turning on my heels and give it the two-fingered salute, but embracing its attempts and looking past its downfalls.

The show is called “Open Cube’ and is curated by Adriano Pedrose. He invited unknown artists to submit their portfolios by open submission to display their work in a group show at their Mayfair space. The gallery received over 2900 applicants to which 28 where interviewed by Pedrose and then whittled down to the final 17. Pedrose took the premise for the show from the curators bible, ‘Inside the White Cube, the ideology of the gallery space’ (1973). He wanted to focus on the ‘White Cube as an organisation, as a physical space and as a concept, questioning the relationships between existent notions of ‘inside’ and ‘outside’, values and economics’.

The works on display are very well suited together, with the show housing a lot of abrupt rigid industrial forms, soft metallic colours. There is a feeling that these works have come together from near and far to be here but they have not come from the same aesthetic and cultural upbringing.

Frank Ammerlaan, ‘Untitled’, Chemicals on canvas, 2013. Courtesy of the gallery.

Fay Nicolson, ‘A is for Albers, Wood sculpture with photocopies, 2011-12. Courtesy of the gallery

At this point in the review, people tend to point out the artist that stood out, however in this show I feel like Pedrose has put himself out there as the artist and that the works on display belong to him and the artists/art are just being used as tool for his own art piece. It feel not that he is challenging our national boundaries and the White Cube as an organisation, but more creating his own installation and environment where the creators of the physical objects are obsolete; the only place the artists are mentioned is tucked in at the back of the press release where it mentions, in as minimal space as possible, their birth dates and educational background, popped in like credits at the end of a film once all the punters has left the cinema.

The show is far from perfect with the works feeling like they boiled down to an aesthetic decision; but my hat is off in that there is something very different going on in the gallery and I admire the fact that they have not just filled the space with another artist we all enjoy. They have attempted to challenge our understanding of the gallery space and the role of curator and the creative. It’s just something different, and how can you not enjoy that part of your brain being engaged.

And regarding growing older within the art, don’t worry readers, because maybe I have turned into a lion with no teeth but I’m happy with that because I enjoy chewing over shows like this to understand something more. Bring on the pipe and slippers I say. 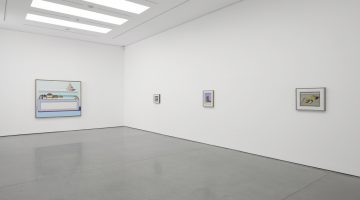