+Many Russians turned red in dismay this week as a building went up in the center of Moscow’s most historic square in the form of a gigantic Louis Vuitton suitcase. The 30 by 100 foot tall luxury trunk, complete with the Paris’ fashion houses iconic insignia and plastered by the Russian national colors, was an advertisement for the companies travel wear disguised as a charity event that is being touted as a charitable project of Russian supermodel Nataliya Vodianova. Her supposedly well-intentioned endeavor to raise money for deprived children has stirred up a little bit of every corner of Moscow society. Many local shopkeepers and tourists see it as an eyesore, and the locals note that it takes up a great deal of the space used for New Years dancing. Most offended however, are the Muscovites and government officials alike, not the least of which conservationists who see the consumerist monolith as an offense to the cultural heritage of Red Square. Many revere the locale as one of the most privileged and sacred in Russian history and have expressed disdain that came to a fever pitch Wednesday when the Kremlin ordered Louis Vuitton to take it down.

However, there is one group of people who see the oversized accessory as a great treasure: the Russian art community. The curator Marat Guelman pointed out that the “LV” symbol can be read as an acronym for Lenin’s initials, while many commentators in the visual art sphere where quick to point out the glaringly obvious allusions the luxury brand’s vulgar manifestation had to the growing wealth inequality and government corruption associated with financial and corporate mergers. It is for this reason that many artists see the eye-sore as a magnificently pulled off conceptual art project, an unrivaled mirror held up to post-soviet Russia which is being devoured by capitalism. Many have called for it to be considered for the nations most prestigious art prizes, the Kandinsky Prize and the Culture Ministries’ “Innovatsiya”, whose 2011 winner was Voina art collective’s giant penis on St. Petersburg’s Liteiny Bridge. 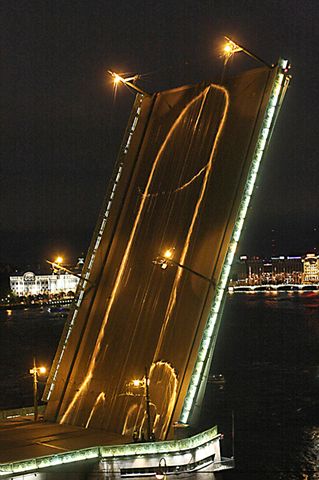 Art Collective Voina’s 2011 piece that won the Innovatsia award by giving a big fuck you to Russia’s FSB, successors to the KGB.

This all comes a couple weeks after artist Petr Pavlensky nailed his testes to the center of Red Square to protest political corruption and public apathy, to say nothing of the glut of Russian money that has been poured into recent art auctions and fairs by many an Oligarch. Only in Russia.

+ Radu Dogaru, the ring leader of the gang of fools who committed the massively enthralling art heist last year in Rotterdam that allegedly (although still not certainly) saw priceless masterpieces end up in his mothers stove was put in the slammer this week. He and his accomplice Eugen Darie have finally met the hand of the law, and have been sentenced to six years and eight months in prison, a sentence that even Darie’s lawyer admits was the “correct decision”. This comes after Dogaru had not only committed one of the greatest art thefts in history and had tried to relieve some of the evidence on his own mother, but went so far as to have the gall to sue the same museum he stole from for negligence, arguing that they made it far too easy for him and his cohorts to make off with the art works.

Eugen Darie and Radu Dogaru, debonair performance artists in their own right. Now behind bars.

+The private life of Cornelius Gurlitt continues to get more tragic, and it has become increasingly more difficult to pin down what is the most significant and heart wrenching part of the story. It turns out that the son of the art collector Hildebrand Gurlitt who helped the Nazis collect stolen art, also counted many of the artists who were despised by the Nazi’s as his personal friends, and was himself part Jewish. One has to feel a bit of sympathy towards this shy old man who housed one of the biggest collections of stolen art to date, for in a recent interview for Der Spiegel he revealed that not only were the paintings his only source of comfort, but that they were the only things he loved. He told the newspaper that he had never loved another human, only his beloved paintings.

+The Algerian artist Adel Abdessemed, whom many in the San Francisco art community will remember quite well for his controversial 2008 Walter and McBean show “Don’t Trust Me”, has offended people again. This week it was revealed that French soccer player Zinedine Zidane had asked for the removal of Abdessemed’s statue “Coup de Tete (headbutt)” from one of Doha’s main promenades, presumably because Zidane was instrumental in bringing the World Cup to Qatar in 2022. The statue depicts a notorious soccer match when Zidane head-butted an Italian defender during the final moments of the 2006 World Cup Final. 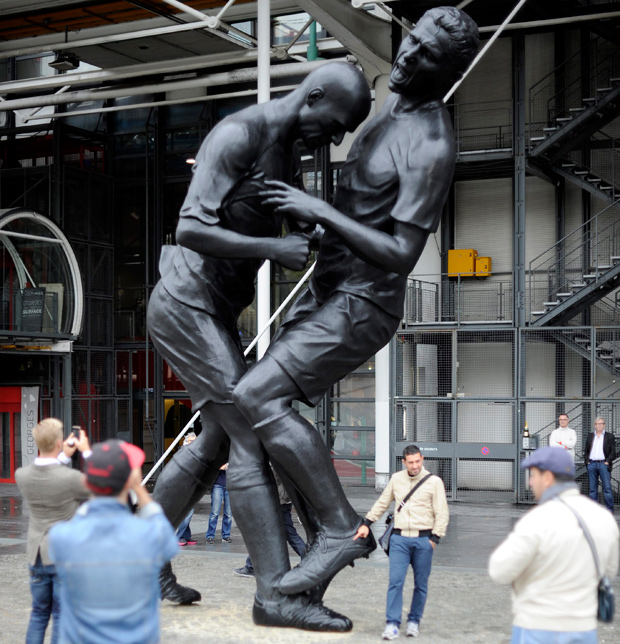