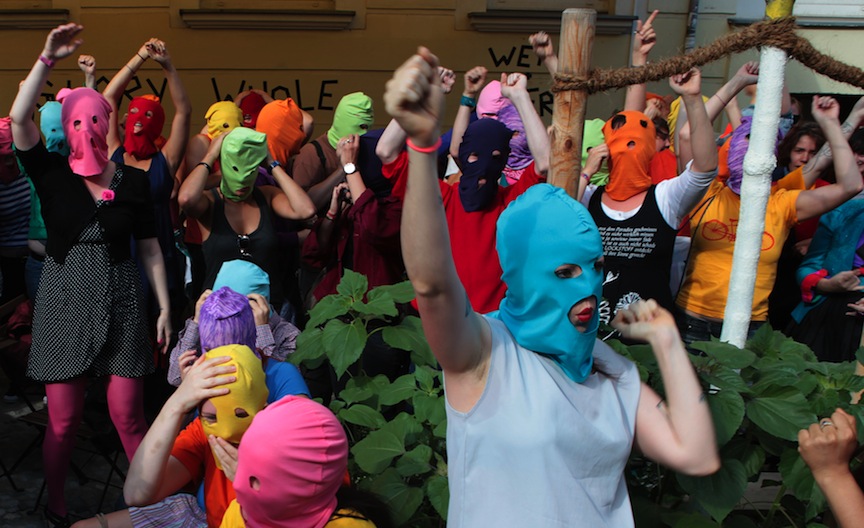 Three art related news items in heavy circulation this week had the common theme of being connected with a crime, a combination that never fails to ignite passion and interest.  But why is this combination so compelling?  Perhaps it’s because art and the prosecution of a crime, or “justice”, have a common denominator: judgment.

Art and crime share the common tenet of being predicated on a predominantly subjective judgment of good and bad, right and wrong, and as such they both have the potential to ignite furious debate, as well as to bring arguments about the subjective quality of art into the mainstream.  Though it is the link with crime makes these stories national news, the question of what art is and how to judge its value gets a brief moment on the national stage.

Here are this week’s stories:

+ On Wednesday the Russian parliament unanimously passed a new law extending amnesty to prisoners convicted of “hooliganism”, including Pussy Riot’s Nadezhda Tolokonnikova and Maria Alyokhina who were sentenced to two years in prison after performing their “punk prayer” in a Moscow Cathedral in early 2012.  If all goes as planned (which is dubious given the uncertain nature of Russian law) they will be released within the next six months.

+ Chinese immigrant Pei-Shen Qian, who forged the modernist paintings that are at the center of the Knoedler gallery scandal, gave a small interview to Bloomberg Businessweek in which he revealed that he was unaware of his complicity in the sales of the canvases he painted being sold as authentic masterpieces. The art blogosphere was fascinated by his statement: “I made a knife to cut fruit. But if others use it to kill, blaming me is unfair.”

+ Jerry Saltz appeared on CNN Wednesday to discuss an ”artwork” by George Zimmerman that sold on Ebay for $101,000. Saltz was called in to critique the artistic merits of the painting; a schlocky blue and black American flag, which Saltz pointed out was clearly based on a pixilated stock photo.  Zimmerman added the words “GOD ONE NATION WITH LIBERTY AND JUSTICE FOR ALL” which Saltz found particularly perverse given Zimmerman’s history, stating his opinion that the selling of the painting was Zimmerman’s need “to be at the center of attention” adding,  “it’s a bit psychotic”

Next post SFAQ Pick: "Model Questions for the Sun, the See and Other Things…" solo exhibition by Peter Fagundo at Devening Projects, Chicago.