Hosfelt Gallery is currently showing “On the Road” by Gideon Rubin and “Tilted Plane” by Jim Campbell, juxtaposing the work of two artists born decades and continents apart. Gideon Rubin is the kind of painter whose effortless facility in the medium tricks viewers into imagining it’s facile. Jim Campbell transforms light bulbs and a temporary chamber into a magical realm threading the space between abstraction and representation. Both artists start with digital sources. Rubin presents us with physical monuments to digital anonymity that verge on nostalgia. Campbell’s offering is fleeting, unnamable and immersive.

With “On the Road,” it’s hard not to think of Keroac’s manifesto for the Beat Generation, wild with promise. There’s something historical, lived, past about this collection of paintings. And that’s ironic because the artist has forgone the 20th century found photographs he used previously as source material for contemporary pictures taken from the internet or souvenir postcards.  In “Untitled (above water),” a girl dangles her legs from a tree branch over a lake. Then there’s a still, grey interior that aches Whistler. There’s the classical nude, lounging, half covered, on a sofa and another that’s much more explicit, recalling Manet’s “L’Origine du monde”. The rough, raw linen plays an active compositional role beneath these loose but mostly perfect pictures. A girl peels off her shirt at the beach – pre-ordained horizontals comprise the thick white bands of the fabric stretched between her hands. 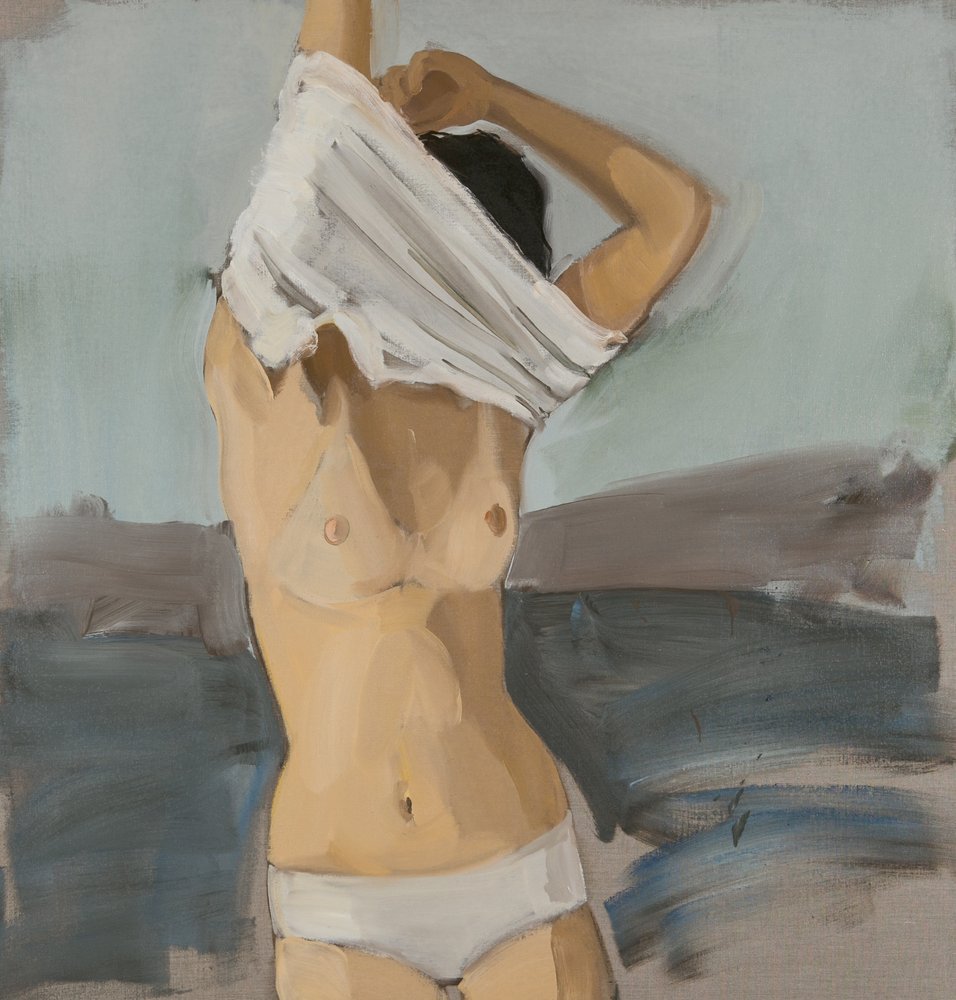 Rubin’s characters are anonymous. By erasing their features, he goes a step farther in appropriating their images. The man striding forward with the wind in a suit could be anyone’s father, just as the empty pool reflecting back several lounge chairs spills over with personal memories, longings and prejudices. The simple titles, “Suit” or “Black Bikini” reduce these compositions to their core, objective elements. 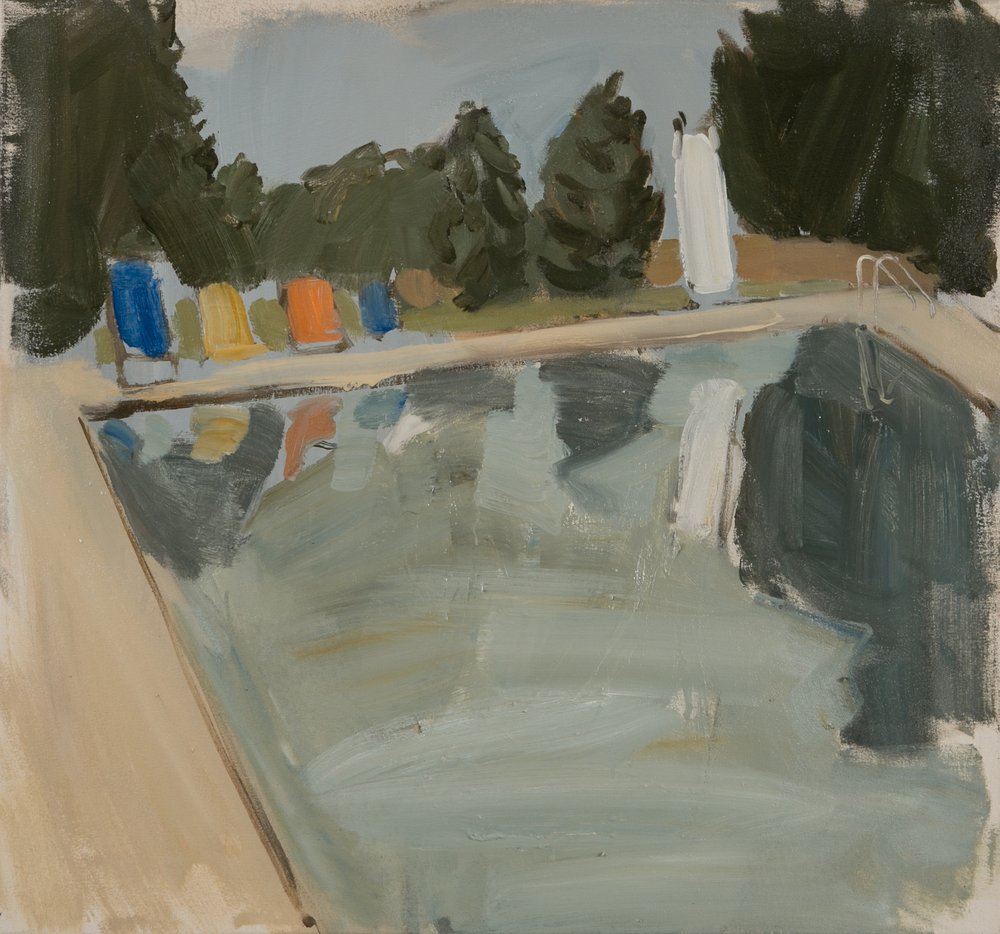 Where these paintings claim brilliant familiarity (or is it us who claims them?), Jim Campbell’s “Tilted Plane” is enchanting mystery. Installed behind a black mesh curtain at a canted angle, hundreds of incandescent bulbs first appear as a mirage or infinite reflection. Visceral disorientation occurs. We don’t know what we’re looking at or where we stand in relation to a work that may or may not describe something. Flickering lights mimic the shadows cast by passing birds, but the shudders spasm so quickly across the space as to seem imagined. 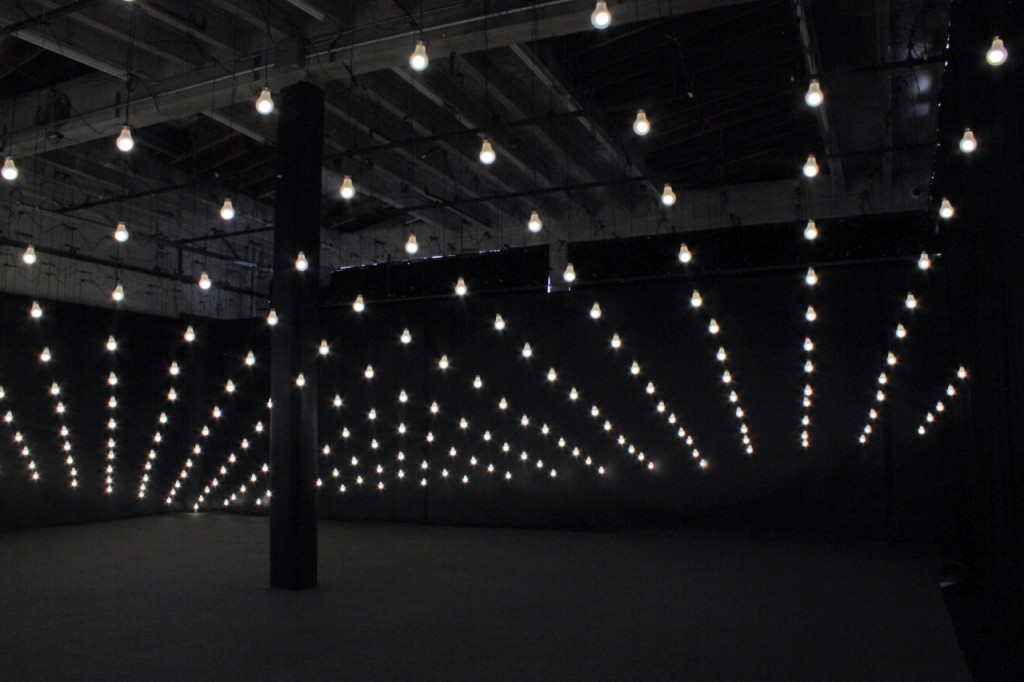 This work is distinct from Campbell’s ‘exploded’ interpretations of two-dimensional imagery because we can enter into it, exploring with one arm outstretched in fear and anticipation of touching one of the light bulbs and breaking the spell. The stark angle and precise alignment of the lights contrast with our experience of breaking into the work’s space. Operating on a different level than a sculpture jutting into space or a painting spilling over onto the wall, the installation demands interaction. It forces movement and tortures those who hesitate when they’re told the art is for touching, for engagement. I’m reminded of stories of Peggy Guggenheim’s gallery in New York, where visitors could pick up the art. Art is something to pick up, something with which to live.

Gideon Rubin’s “On the Road” and Jim Campbell’s “Tilted Plane” are on view through January 25.