How does one define a divide? How does one make visible the invisible? In his new exhibition at Angles Gallery in Los Angeles, Tony de los Reyes continues his ongoing series of Border Theory paintings with 14 new works and a suite of lithograph prints. Specifically exploring the natural boundary of the Rio Grande (called Rio Bravo) in Mexico that dominates the eastern border of the US. De los Reyes uses abstraction as a means to depict the psychological space that constitute the areas of conflict.

Varied in scale and technique, the paintings are seductive in their materiality. Layers of fabric dye saturate raw linen, making washes that are poured and pulled across the surface. Some paintings are entirely abstract, while others show the faint trace of arial views with shifting gradients in shades of pink, blue, orange, and green. 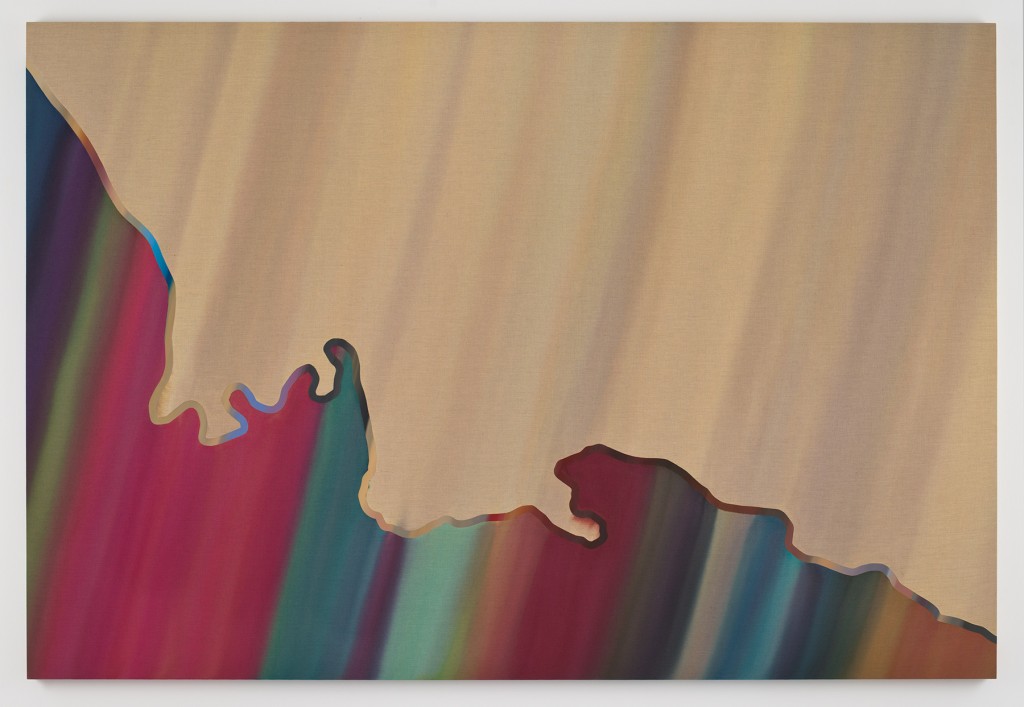 In the painting Border Theory (rio bravo/rancho el comedor) reverberating field of color meets a desert colored beige to the effect that they slide under each other like ideological tectonic plates. Another painting, Border Theory (rio bravo/las garzas) references the undulating waves of the river in light pink waves with a more explicit brush stroke. Breaking the mold of representation is a suite of 8 lithograph prints, photographs of Border Field State Park in San Diego, California, showing blurred images of the park’s gates and landscapes. Most recognizable is the pillared fence that juts out into the ocean with its futile yet symbolic edge reaching just a few hundred feet into the sea. 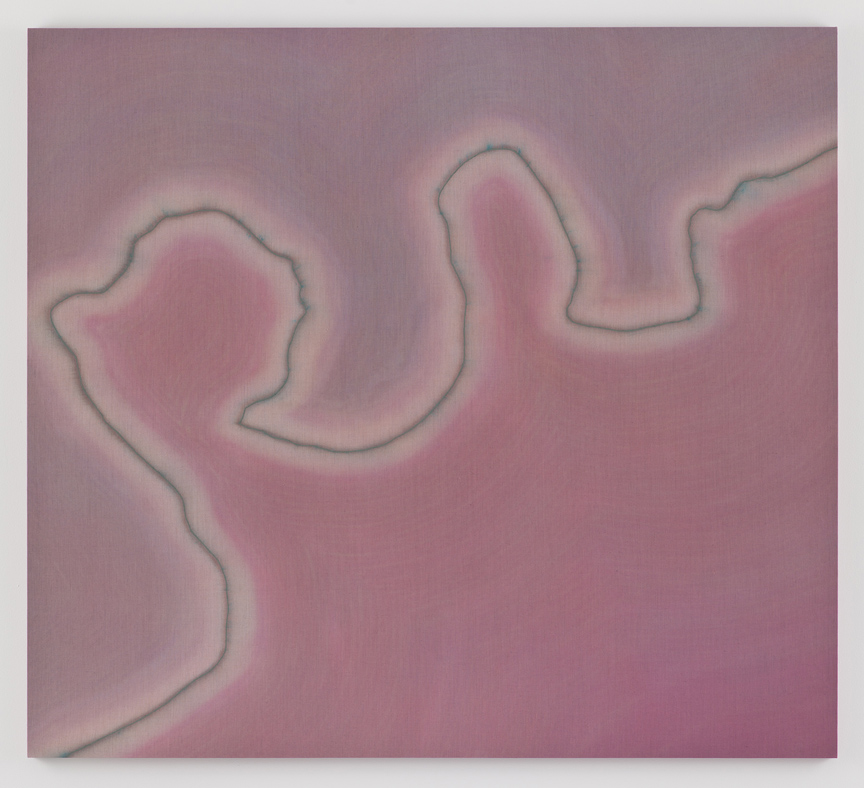 The consistent element in all of the paintings is the distinct hard edge line of the supposed border, that whether curved or angled comes to represent that ever powerful imaginary line in the proverbial sand. This particular line carries the weight of the color and composition within the works, as they seemingly reach to pull the painting apart or hold it together.

In a set of smaller, more intimate paintings, de los Reyes uses Google map images to show the vast empty land that marks a border. Seemingly nowhere, these places without distinguishable city or town look to be arid mountain-scapes. Yet smack in the center of these nondescript locations lies the terminal line, a jagged lime-green edge to delineate the territory between us and them.

For the deep and dark nature of his subject, de los Reyes can sometimes make the paintings look too pretty, making them feel as if they might whitewash the complexity of the border inherent in it. However, it is a productive tension that in some ways reflects the pervasive state of indifference or even ignorance that remains in the lack of resolve for immigration reform. In a time when one might dare to speak the word politics inside a gallery space, the paintings are refreshingly relevant and capture the intangible nature of politics and ideology in the hard edge line of oil paint.

Previous post SFAQ Pick: "If This Is Left, What About Right?" group exhibition at Kate Werble Gallery, New York. On view through February 15th.