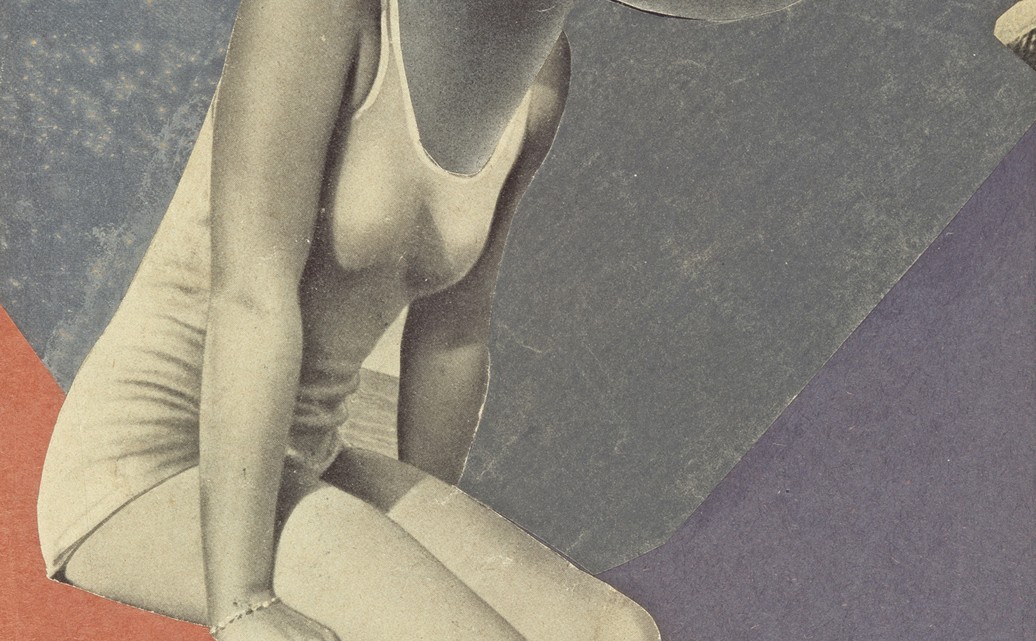 Hannah Höch was the only female member of the Berlin Dada movement, and a pioneer in photomontage, a medium and method she used to satirize Weimar politics and subversively comment on society, gender, and race. Her first major exhibition in the UK is currently on display at the Whitechapel Gallery from January 15 – March 23, 2014.

The Hannah Höch exhibition brings together a collection over 120 pieces of work, and spans the length of her career, from the 1910s -1970s. Höch’s varying series of photomontage are presented in a chronological time line, beginning with her early work, which was heavily influenced by her career in fashion magazines. Höch critiques the way in which women are represented in the media, by ripping their images out and pulling them away from the objectified environment of a magazine page. She re-applies an image of the ‘new woman’ into a formation and structure that addresses how we perceive beauty. 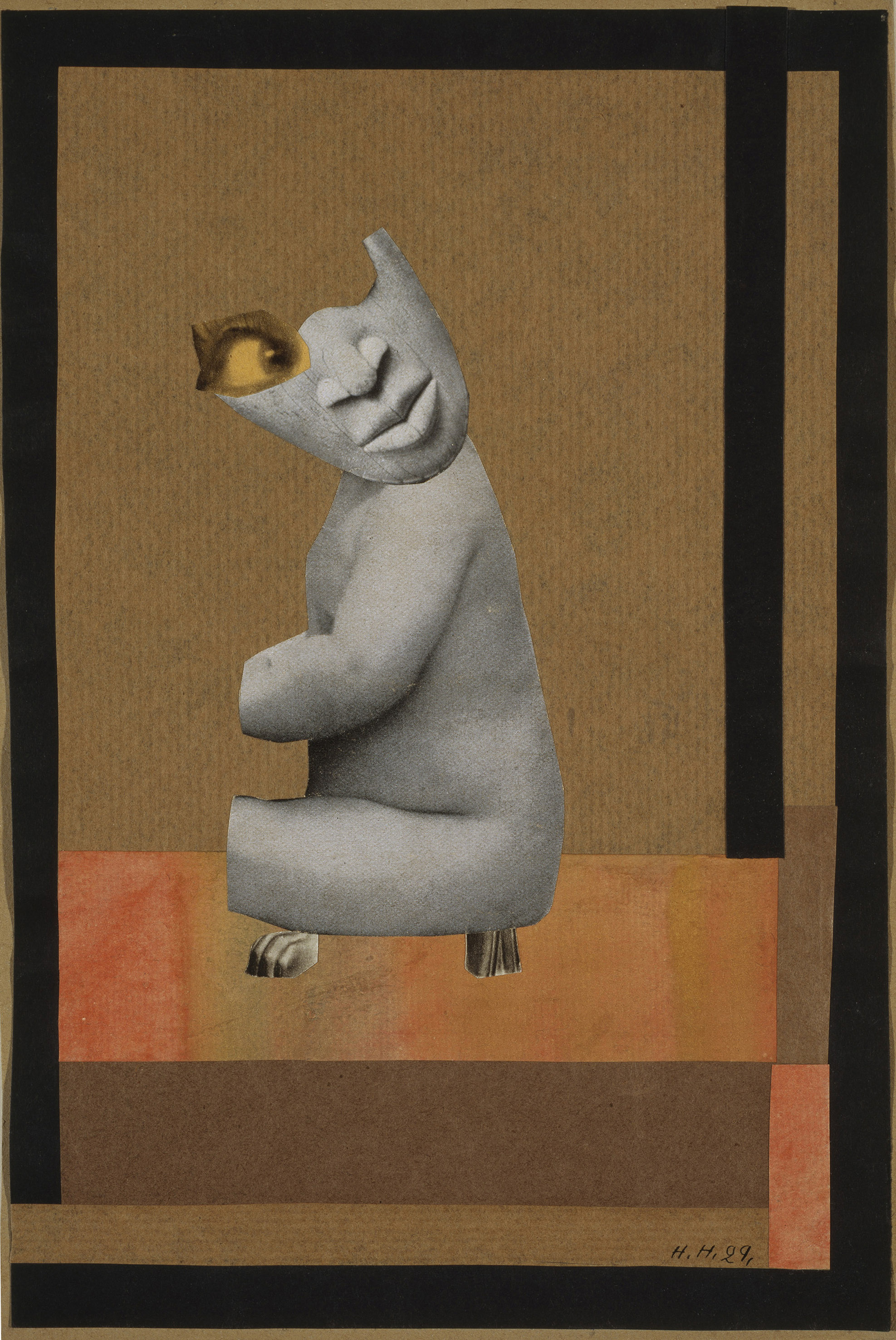 Höch’s Ethnographic Museum series questions the construction of gender and the notion of beauty, for she pairs Ethnographic masks with images of the female body. Höch’s collage “Aus der Sammlung: Aus einem ethnographischen Museum (From the Collection: from an Ethnographic Museum)” (1929), combines the body of a baby with a traditional mask and gives the figure an eye of a modern woman. Höch wants us to relate to the body in a different way, as this figure does not adhere to the idealized vision of beauty, but questions different standards of beauty. The new woman she creates here does not correlate to that of the typical woman of ‘typical’ beauty, she is a woman with a modern eye.

Höch’s art is personal, and we are greeted with a playful exploration of re-imaging. She cuts and pastes, taking familiar images and reconstructing them. Women in Höch’s collages are beautiful, feminine, and playful, but not as sexualized objects. Instead, women are depicted in a way that challenge preconceived notions of femininity. This is the new woman.

The upstairs gallery showcases a collection of Höch’s scrapbooks while the rest of the exhibition is dedicated to her experiments in abstraction and ‘Fantastic Art’ where we see her transition into color and an adjustment to her portrayal of the new woman. 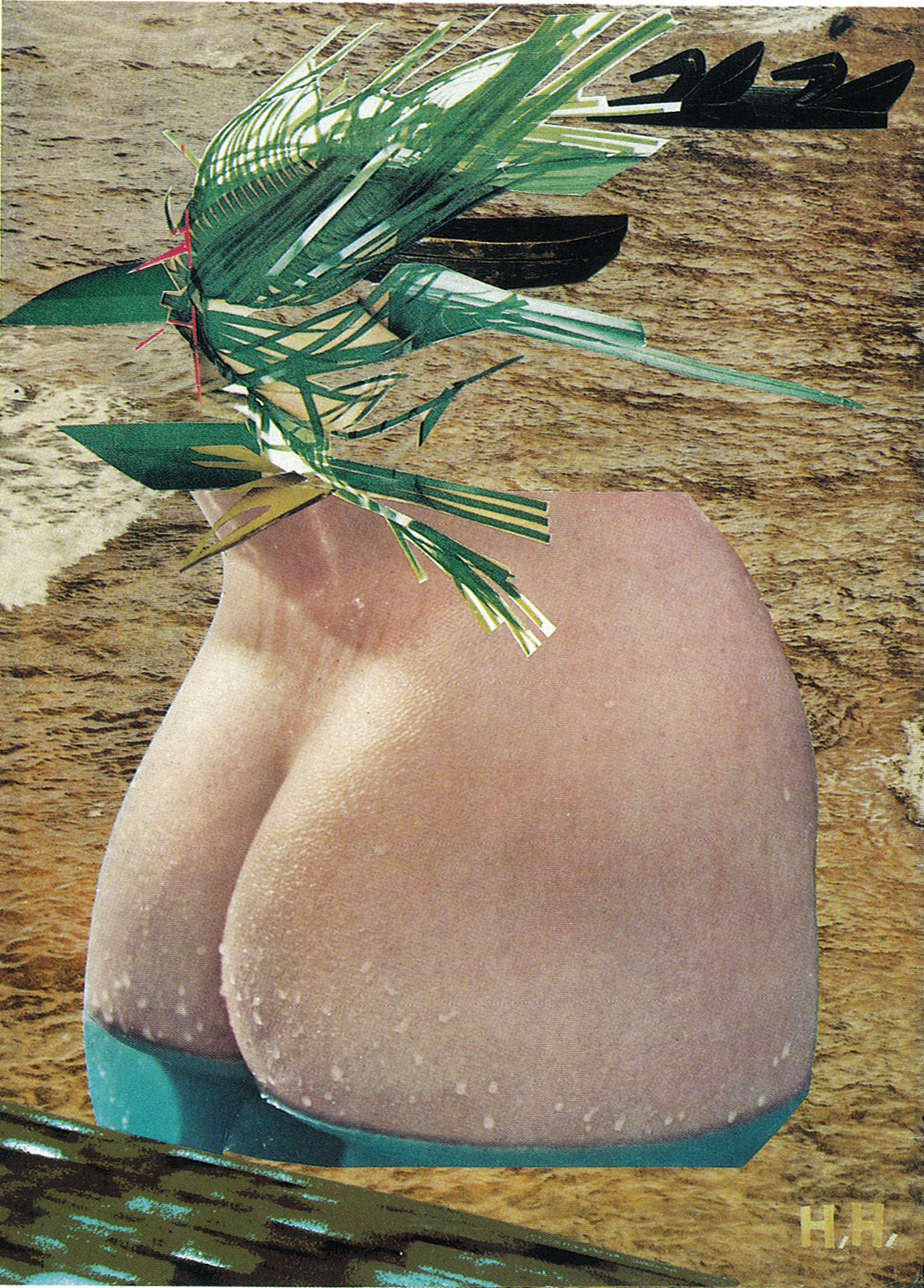 Given the extent to which the female body is included in her work, it is evident that Höch is conscious of sex and her bisexuality. However, sexuality is a factor that presents itself in her work scarcely. I was struck by the collage of a peachy pink bottom resting on a beach in “Der Schöne Po (The Beautiful Bottom)” (1959). For this was the only overtly sexual image in the exhibition. It’s bright turquoise hues and sparkling semblance stand out in comparison to her earlier collages – it has an exaggerated, girly character which I regard as a shift in the image of the new woman. 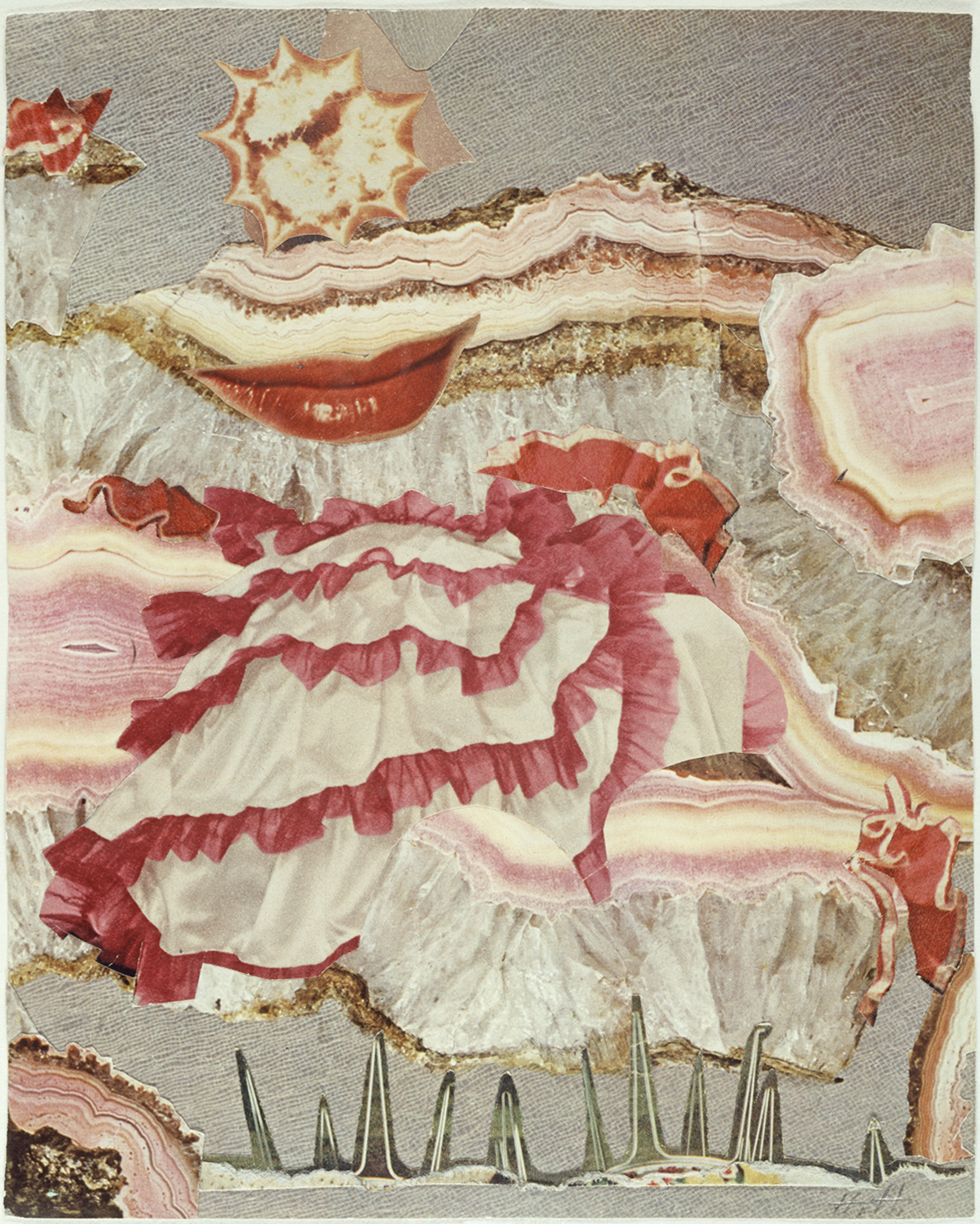 By pulling apart and reshaping figures, most commonly female, Höch seems to be challenging the treatment of gender in 20th Century Germany. Traditionally the female figure in the artistic canon exemplifies an object of beauty. Höch contests this notion with, “Um einen roten Mund (Around a Red Mouth)” (1967). Here, a set of red lips rest on a mountain of pink petticoats. The inclusion of petticoats, which were worn by women for centuries, draws reference to a traditional and often required uniform for women. However, Höch tears at the petticoats and layers the pink horizontal frays one on top of the other, creating an abstract image of a vagina. The violence implicit in the medium Höch used here literally reshapes an image of the very core of a woman’s femininity.

Höch’s work is ambiguous, but this allows for a sort of fluid and ‘fantastic’ reading. The medium she uses is surrealistic – the multifaceted layers of cut and pasted images relax the boundaries of interpretation, and therefore we can read them in myriad ways. Her work is both political and poetic. The way she chops and splices images is political, and often comments on gender, but the finished product is beautiful and dream like.

My first impression was that Höch’s work is confused, that she struggled between different images of the new woman, as she too identified with struggles alike, (e.g. confusion with her bisexuality and being the only woman in Dada) “Two Faced” (1928), illustrates such confusion; a collage of a woman with two faces, drawn in different directions. However, this exhibition takes us on a journey of the new woman from the stiff magazine women in pearls to the effervescent pert behind. And this is exactly the point. Höch works with the notion of the fragmented self. The new woman is duplicitous and you can read her in multiple ways. Höch wants us to have our own personal and objective understanding of the ‘new woman’, as there isn’t one way to perceive her.

Höch’s exhibition at the Whitechapel Gallery is a humorous critique of gender and beauty. Her work is crude, but not offensive. It is light hearted, but makes a point. It’s sexual but not sexualized. Hannah Höch cuts the perfect balance and creates a new image of the new woman.