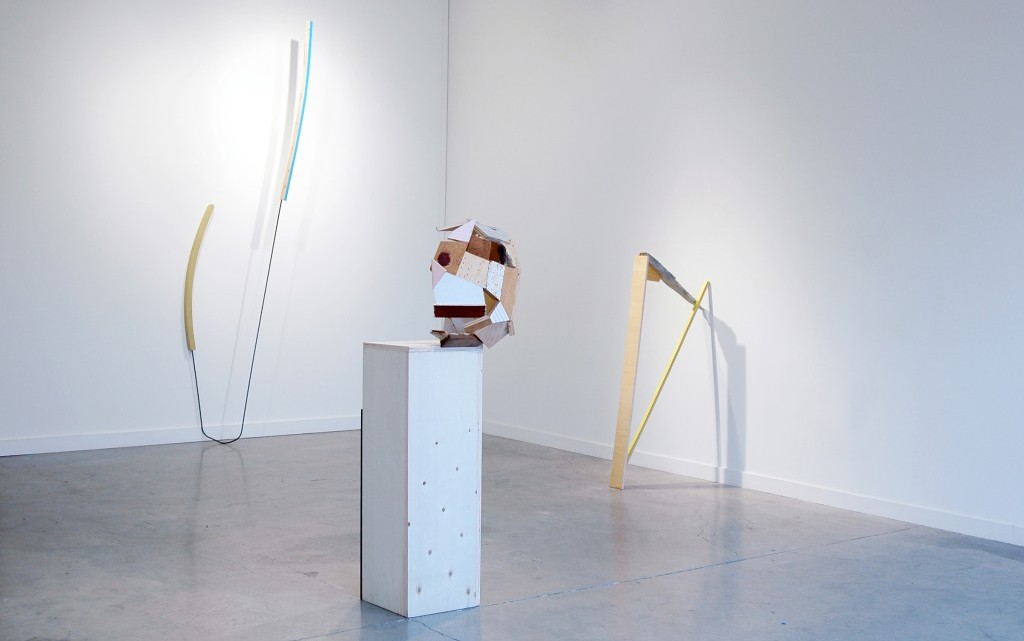 “Thrown a Curve”  by Kirk Stoller

As the title of the new solo exhibition suggests, Stoller’s work is seemingly unstable, ready to fall over or slip. Upon closer inspection, the work is stable yet off-kilter, remarking on the assumptions that are generally made in life—perhaps when judging others or when questioning one’s own abilities or proclivities. Overall, the exhibition is referential of Stoller’s continual exploration of humble materials and relational aesthetics. However, there is also a poetic stance governing the work, but not without the discomfort that poetry often affords. Poetry sometimes makes people somewhat uncomfortable because of the gaps and the things left unsaid between the lines. However, those gaps give rise to the larger implications and poignant resonance of silence, or in the case of this work, in the aftermath of the gestures made and the past lives of the materials. 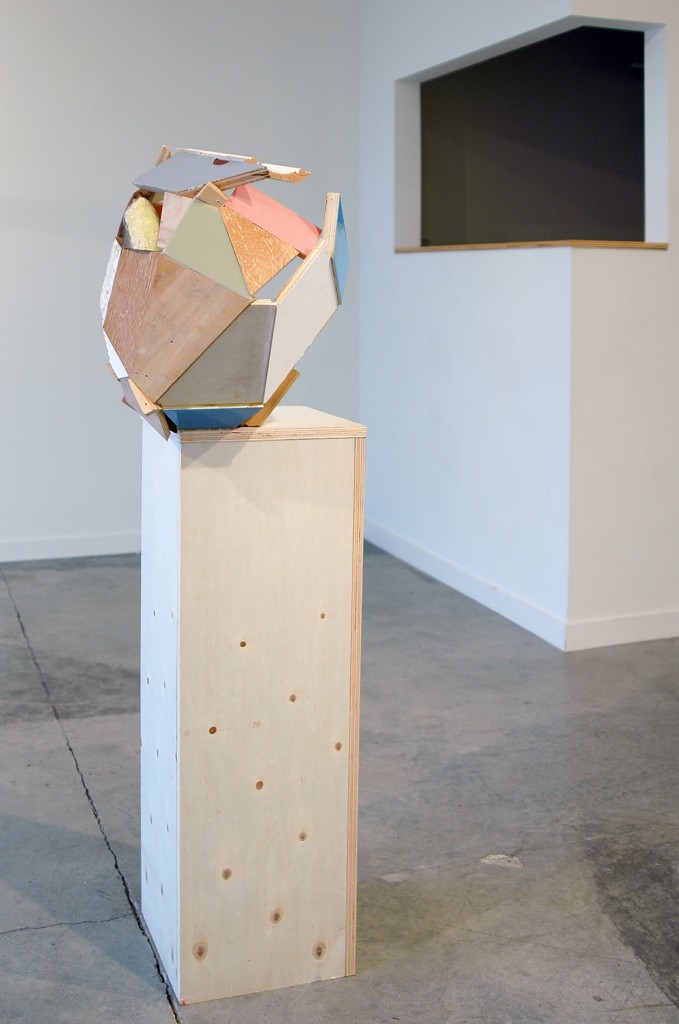 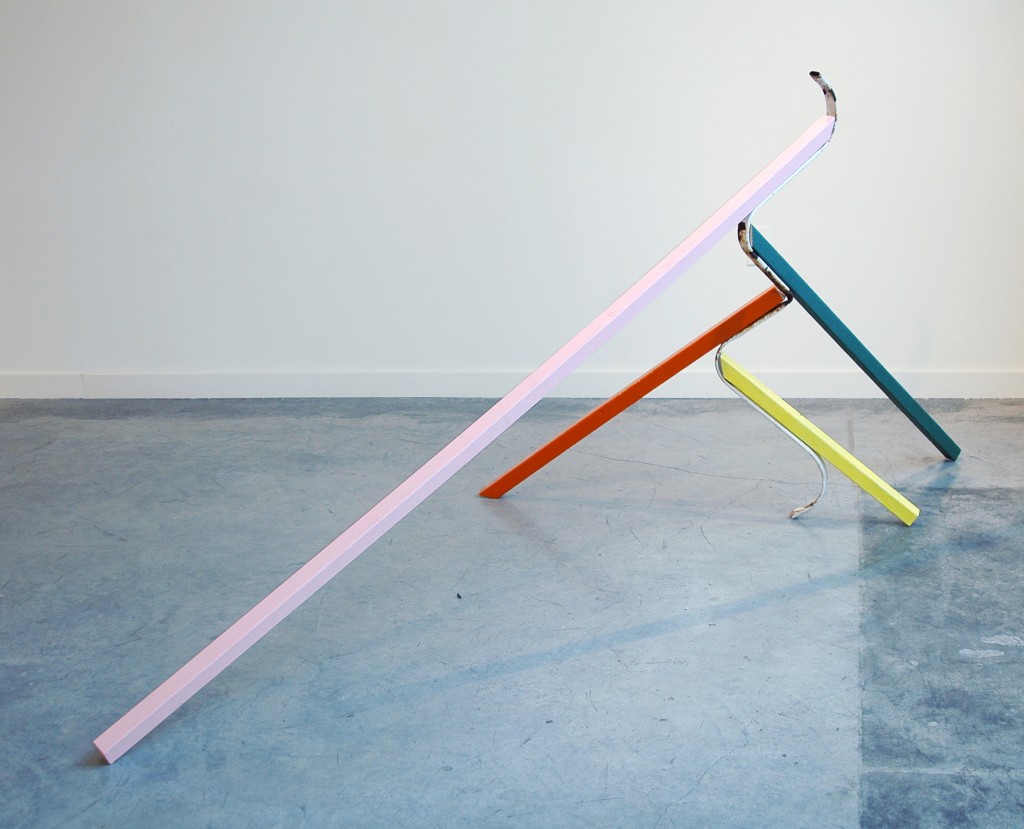 History of artists whose work blurs formalism with everyday life is here, recalling the architectural, found wood assemblages of Kurt Schwitters and the whimsical lyricism of Richard Tuttle. All of the work is untitled but subtitled with Stoller’s own language associations with the pieces, although the exact references could be both elusive and revealing for others. For example, “(fountain)” is a catty-cornered array of brightly painted square polls interchanging with a rusted S-shaped support from what appeared to be vintage pool-side furniture. Rather than reading the title literally, the piece seems to have a human quality as if stuck in an awkward pose just shy of glamorous. 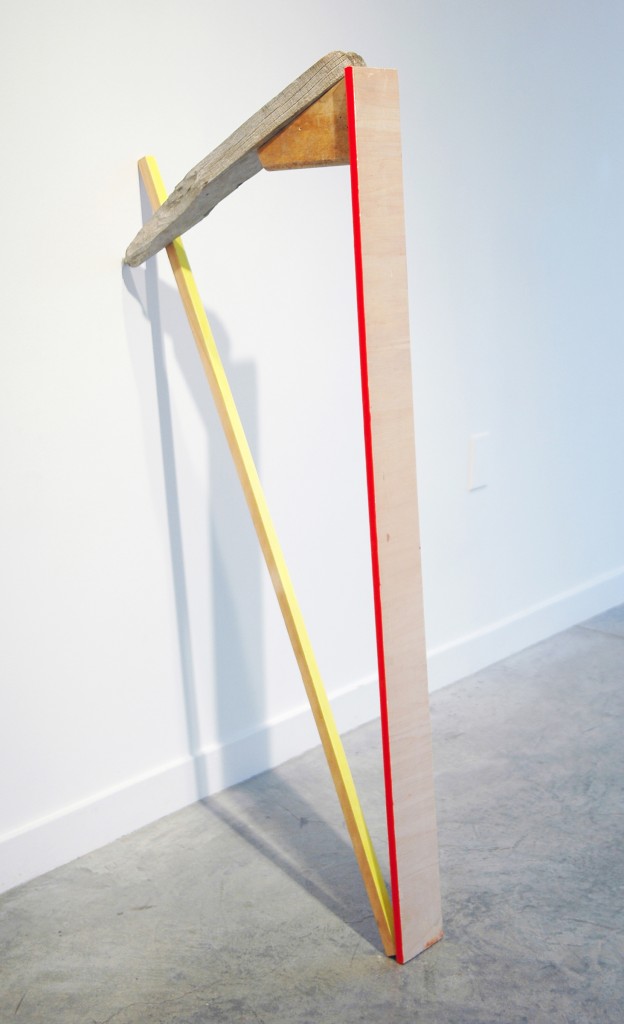 On an adjacent wall, the piece “(harp)” is assembled with industrial scraps of wood left partially natural with painted accents in cheery yellow and electric red that are contrasted by a weathered and knotty chunk of wood. The “harp” leans on the wall retired from its past life, taking on a new life as a relic of something still beautiful, but completely dysfunctional. Again, the human innuendo overshadows the mere formal structures of the work—apropos with Stoller’s continued exploration of the precarious nature of phenomenology. Through exploration of these works, as Tuttle said about art in reference to the quote To be or not to be: “it’s not about making something happen, but about allowing something to take place.” There are only five piece in all, but all of them worthy of intimate and studied time.

Next post Considering the Ethics of Abstraction, Part One