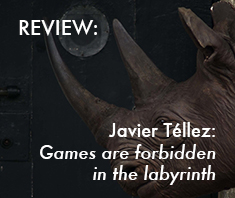 Javier Téllez: “Games are forbidden in the labyrinth”

The gallery at REDCAT continues to be transformed into tangible environments for performance and installation that are as interactive as they are intriguing. Here, Javier Téllez’s solo exhibition meditates on an intersection between the game of chess (with all of its historical and art historical references and implications), the confining practice of institutionalized psychiatry, and Jeremy Bentham’s “Panopticon”.

Foregrounding the exhibition sprawls a wooden chessboard that takes up the better part of the gallery floor. Instead of identifiable chess pieces, Téllez’s psycho-liminal game is played out by reiterative variations of assembled sculptures, somewhat akin to Rauschenberg’s combines. Models of females’ lower anatomy that appear to be from the early 20th century are placed in old, yellowing suitcases, or wedged into wooden barrels that are placed atop starkly white miniature hospital beds. Another piece is made simply of an old, wooden game board on an even smaller hospital bed, while the menial role of the pawn is represented by old-fashioned glass bedpans cast in white, brown, and black. A clipboard next to the set-turned-stage alerts viewers to the particular historical game currently being carried out, which changes every day and is read, like a script, by a gallery attendant who makes another move every hour on the hour. 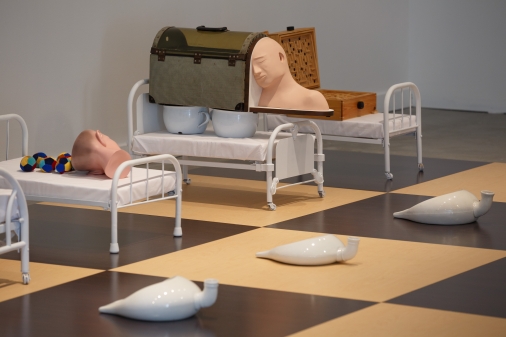 On the wall to the left of the game in situ is “Three Chess Problems: Carroll 1872, Duchamp 1943, Nabokov 1951″ (2014), in which the three famous chess games are diagrammed with added symbolic images like a film still of Nurse Ratched from “One Flew Over the Cuckoo’s Nest” and Diane Arbus’s “Identical Twins, Roselle, New Jersey, 1967″. Behind the front room, Téllez’s short film plays. It is perhaps best characterized by the notion of cyclicality, which is often described as central to the thought processes of the mentally ill. 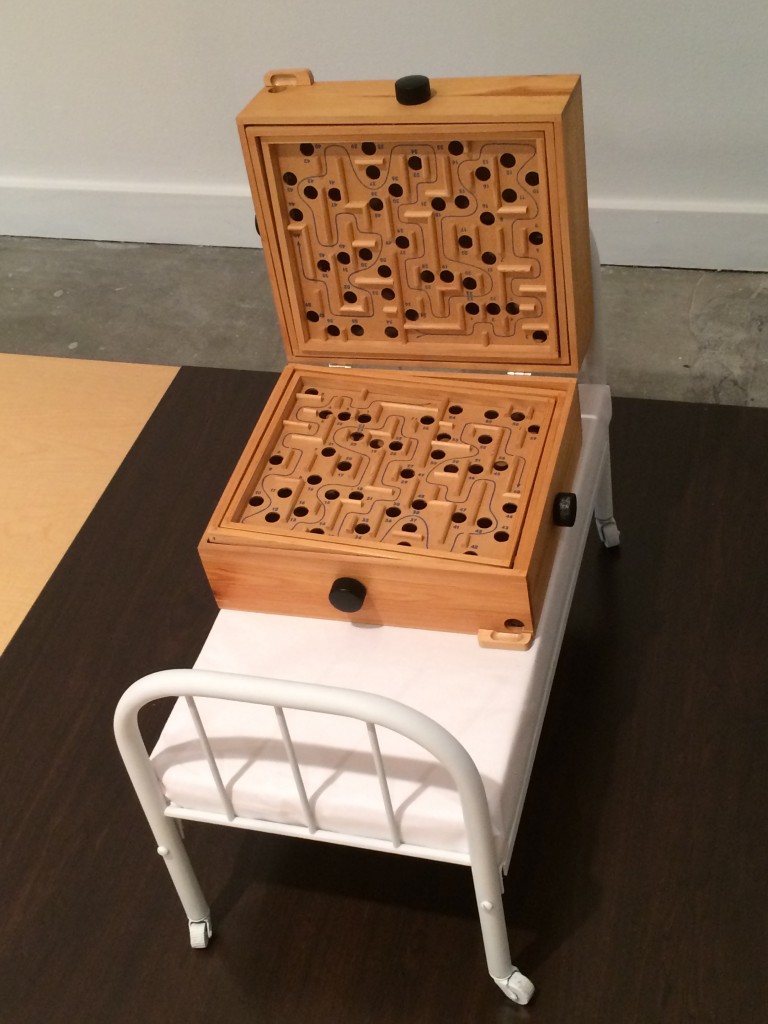 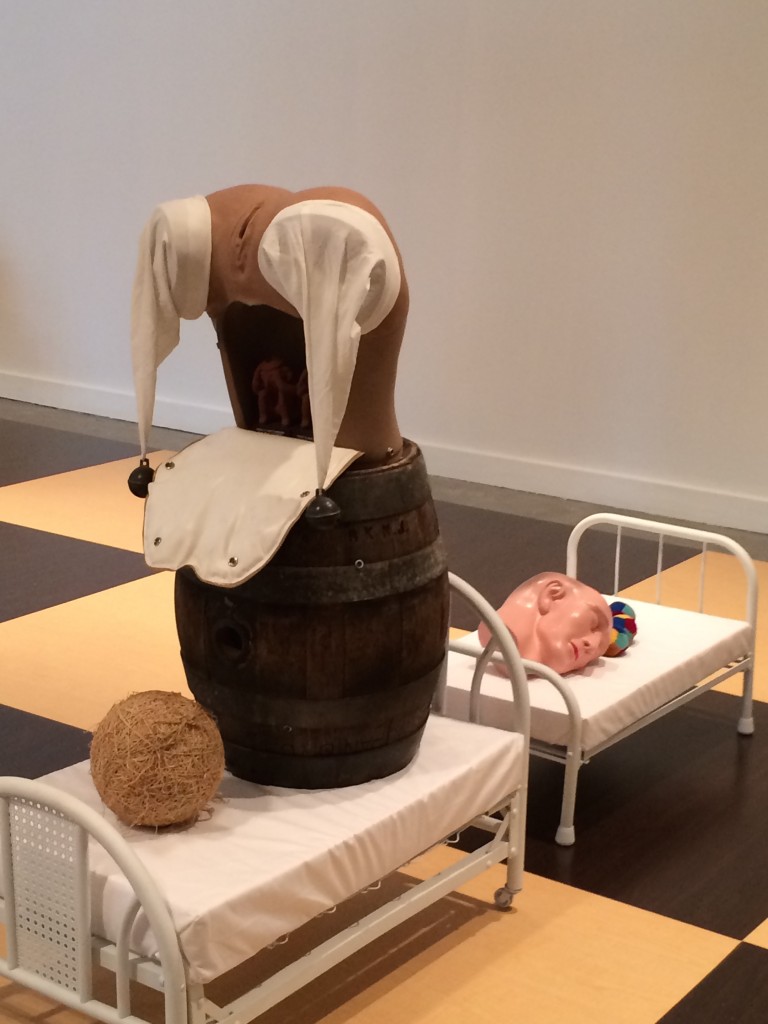 In the crux of this exhibition, “Dürer’s Rhinoceros” (2010), Téllez has reimagined an old German play “Marat/Sade” that takes place in an insane asylum and was in fact performed by in-patients of a similar facility. In the same vein, Téllez, as he has many times before, collaborated with mental patients and cast them to play out the characters that lived in Marat/Sade’s institution. Recreating the imprisoning psychiatric environment Téllez again refers to the circle or loop in the precise architectural structure that serves as the set for the film and recalls the Panopticon with small rooms surrounding a spherical courtyard, within which a stone statue of a rhino is repeatedly wheeled.

Through each patient’s voice-over we learn bits and pieces of their experiences living in secluded cells, and the odd and inventive ways in which they attempt to communicate with one another from across the courtyard. Each has their individual preoccupations and hobbies, none of which seem to connote the behavior of the insane. Some exercise, other listen to records and dance, another man plays cards by himself, one is fortunate enough to have two mice whom he places in his own miniature model of the circular structure in which he is caged, while one woman sews together a straightjacket and binds a mannequin torso within it. 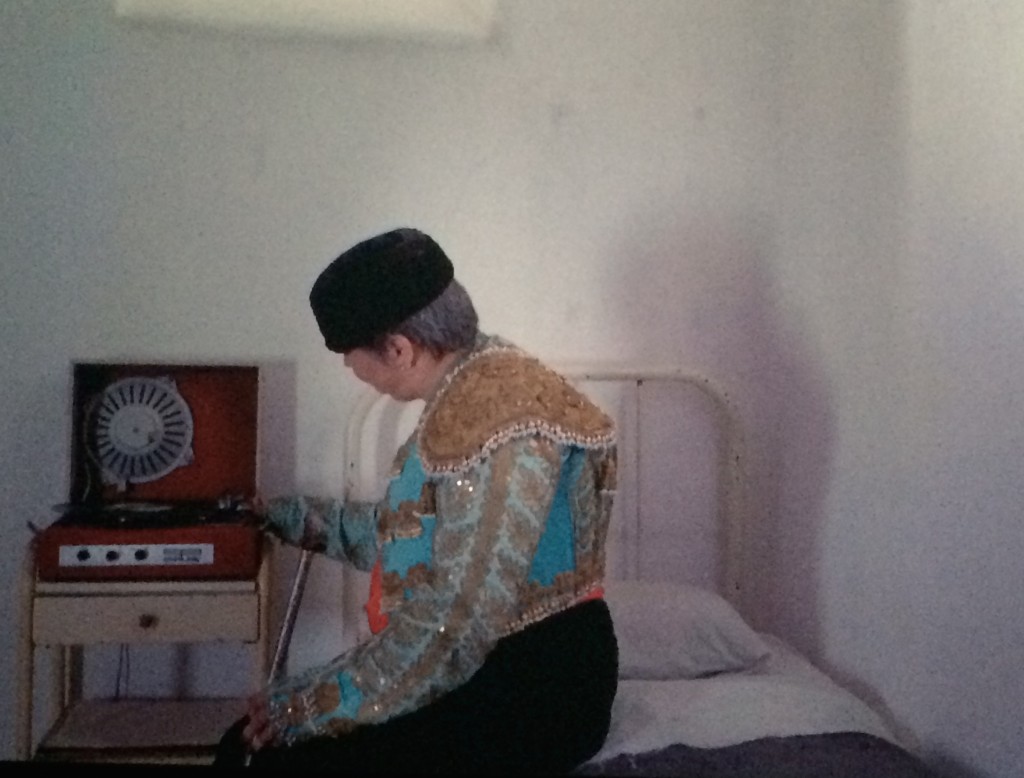 The correlations that Téllez weaves between plays and scripts, games, games within games, insanity, and our familiar, suffocating forms of conventional medical treatment are haunting and impart a sense of an altogether different, undetected kind of sickness that lurks and breeds in plain sight. Having grown up the son of a psychiatrist, Téllez spent much time with mental patients and his characterization of accepted forms of psychiatric practice thus reveals the often-unarticulated experiences of the field from the perspective of its patients. That he has replaced the likes of knights and queens on a chessboard with other childhood board games inverts the idea that a game, even chess, is to be played with one common objective of winning. Instead, having turned the chessboard and its pieces into a play and a set of actors of sorts, Téllez highlights the theatricality of such a game, in which each character, or piece, like the patients in his film, have their own trajectory or story to tell.

For more information about the show, visit REDCAT Gallery.

Further contributions by Courtney Malick include:

Next post SFAQ Pick: "Many Places at Once" group exhibition curated by the graduating class of the Graduate Program in Curatorial Practice (CCA) at the Wattis Institute for Contemporary Arts, San Francisco. Opening Thursday. April 17.