Don’t get your hopes up if you are looking to hear anything—the room is silent despite the title of the exhibition. Instead, the absence of sound, specifically music is made apparent by the objects of its making, such as instruments (guitars) and amplifiers. Not actual, the objects in the room reference and suggest these sound producing things, abstracting them into formal paintings and sculpture that allude to their implied structures and escape their originally intended purpose through the absence of sound altogether. Ben Barretto’s work often explores the functionality of objects, questioning their roles as facilitators to further pass-time. Earlier projects included “Weaves” made with retired rock climbing ropes, “Snap” series of mixed media panels made from athletic trainer pants with snap-closure inseams and “Painting, Paintings” made using paintings as a tool. Following a minimal sensibility, the works in “Surround Sound” exercise both the skill and conceptual rigor that Barretto is known for. 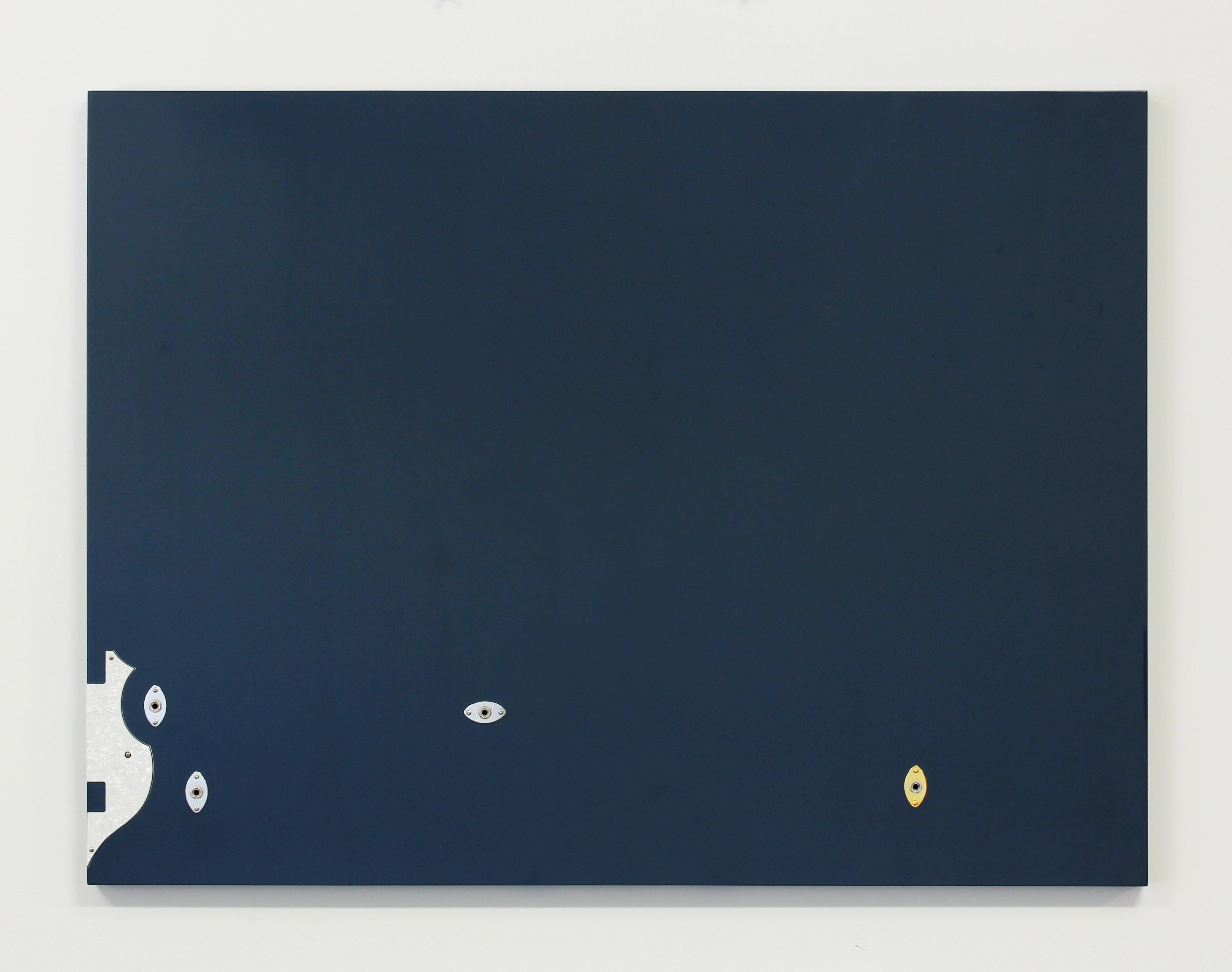 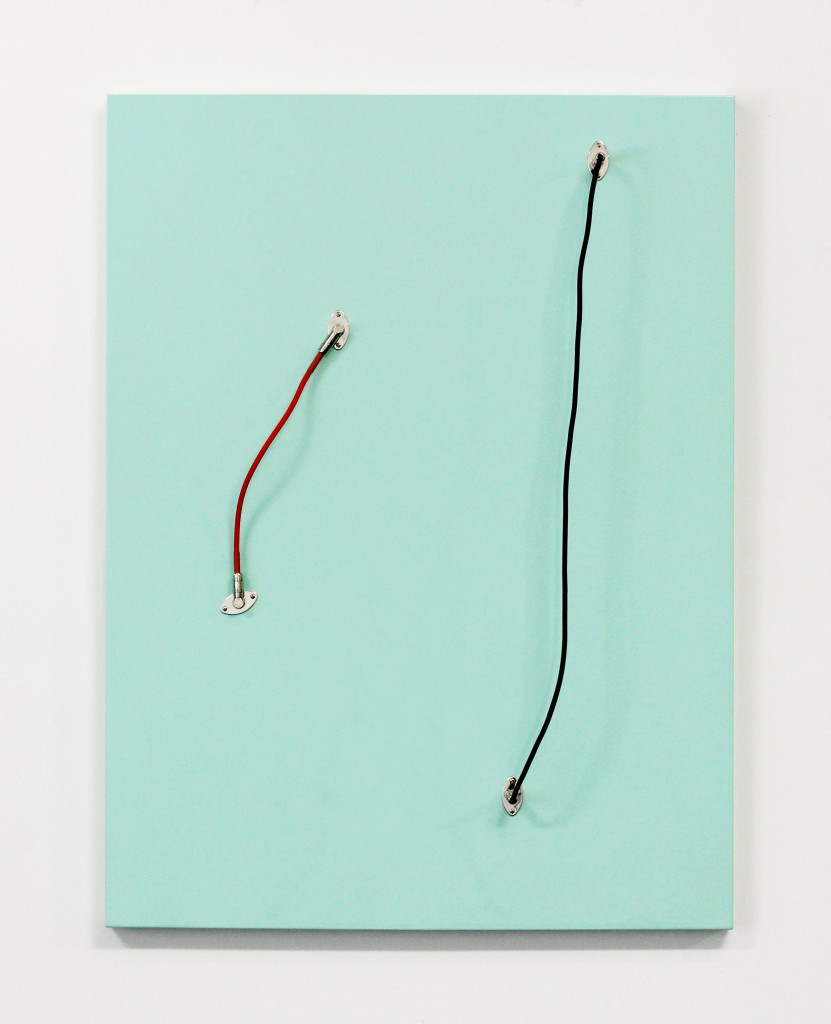 Parallel to the entrance is the piece “San Marino Blue.” After doing a bit of guitar research I learned that the color was used for Fender Jazzmaster’s inspired by the Cadillac El Dorado. Upon closer inspection of the artwork, it is indeed San Marion Blue, which has a dark purple tinge and is frequently used in Bavarian Motor Works (BMW) cars; whereas the El Dorado was Astral Blue or Lake Placid Blue and commonly used for Jazzmasters (but no bother on that previous factoid). Attached to the car automotive surface in Barretto’s pieces are carefully composed selections of metal guitar hardware, including output jacks and a bisection of a pick guard. Other pieces in this series use small lines of cable in addition to the other guitar parts. From a distance they appear as formally composed paintings because of the rectangle canvas shaped substrate and the parts are re-appropriated and augmented rather than allowed to be as they normally are. 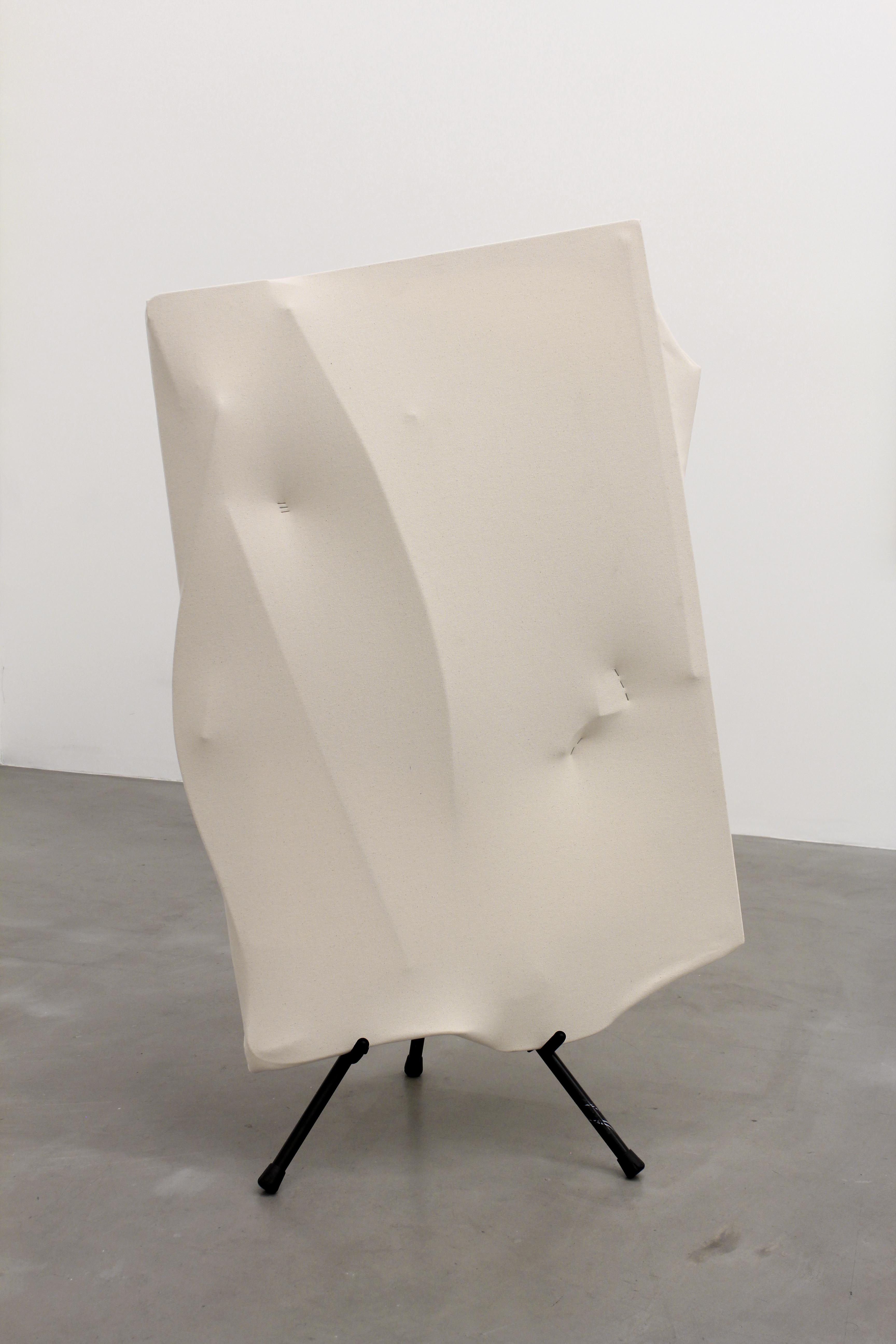 Two sculptures in the exhibition are unfinished blonde canvases tightly stretched over irregularly formed wood foundations. One leans against the wall where ghost flame decals are adhered to the color and the other is set on an Ultimate Support Guitar Stand. Both pieces seem like custom disfigured cases for holding something that does not exist—a fiction as it were of living a rock-star life and driving fast cars. In the foreground of the installation is “Untitled (guitar cable)” which spans vertically from ceiling to floor giving the illusion that the cable is continuing into the subterranean depths of the gallery’s Kearny Street location. Usually seen in coiled spaghetti at the foot of a microphone near foot pedals the piece subliminally alludes to the work that cables do, bringing sound from the guitar to the amp. Instead, mounted into the gallery floor we are reminded of the silence brought to our attention. Like relics at a car show or museum of rock, these pieces formally question the function of the ready-made for fanatics.

Previous review of Ben Barretto’s exhibition, “Self Help” at The Popular Workshop in San Francisco.