Adobe Typekit and SFAQ (San Francisco Arts Quarterly) are pleased to announce a ‘Pop-Up Exhibition & Library’ with related public programing at the 2014 edition of Art Market at Fort Mason, May 15th – 18th.

Publications, showcasing selections from Adobe Typekit’s design and typography library, will be displayed alongside the work of an array of international, digitally based artists, publishers, designers and collectives.

The Adobe Typekit + SFAQ  ‘Pop-Up Exhibition & Library’ will serve as a physical space for the exploration, engagement and discussion surrounding contemporary digital-based art practices. Works will span a wide variety of mediums, from traditional print form to digital media installations, videos, websites, objects, magazines and zines will all be on display; And the public will be encouraged to interact with and explore the content available.

‘The Pop-Up Exhibition and Library’ is a space conceived to proactively bridge the gap between artists and individuals working in programming, design and tech. Select digital and online artists involved in the concurrent Digital Arts and Technology Issue of SFAQ (released May 1st) will have their video and web-based works displayed, showcasing some of the top young contemporary artists working with technology today.

Curating in a Computer World

Jacqueline Kiyomi Gordon, It Only Happens All of the Time and Love Seat, 2014 (Installation shot) Images courtesy Phocasso/J.W. White and YBCA

YBCA’s Assistant Curator of Visual Arts, Ceci­ Moss, will discuss Control: Technology in Culture, a new exhibition series in YBCA’s Upstairs Galleries that showcases the work of emerging and mid-career artists who examine the social, cultural, and experiential implications of technology. The solo exhibitions in this series seek to prompt timely questions about the profound and far-reaching influence of technology in our daily lives by focusing on artists whose work spans a multitude of disciplines and relates to a diverse set of issues, including architecture, acoustics, psychology, labor, consumerism, the environment, and the military. How do artists engage the deeply political impact of technology on our world, both in the gallery and beyond? How do we support a thoughtful dialogue about the effect of technology through art in the San Francisco Bay Area, which is the heart of the global tech industry? Moss will present on the process, research and concept behind the series, reviewing the current Control exhibition Jacqueline Kiyomi Gordon: It Only Happens All the Time as well as previewing upcoming shows.

Ceci Moss is the Assistant Curator of Visual Arts at YBCA. Her curatorial practice is informed by her interest in technology’s cultural impact, and the neoliberal and postmodern drivers behind it. Currently a PhD candidate in Comparative Literature at New York University, her academic research addresses contemporary internet-based art practice and network culture, digital technology and perception, and the materiality of media. Her writing has appeared in Rhizome, ArtAsiaPacific, Artforum, The Wire, Performa Magazine, and various art catalogues. Prior to her position at YBCA, she was the Senior Editor of the art and technology nonprofit arts organization Rhizome, and an Adjunct Instructor at New York University in the Department of Comparative Literature. She also programs a radio show dedicated to experimental music on the free form community radio station Radio Valencia called Radio Heart, as well as playing music and DJing.

“I will talk about my work, how I make it, why I make it,
and how it mutates to different media.” 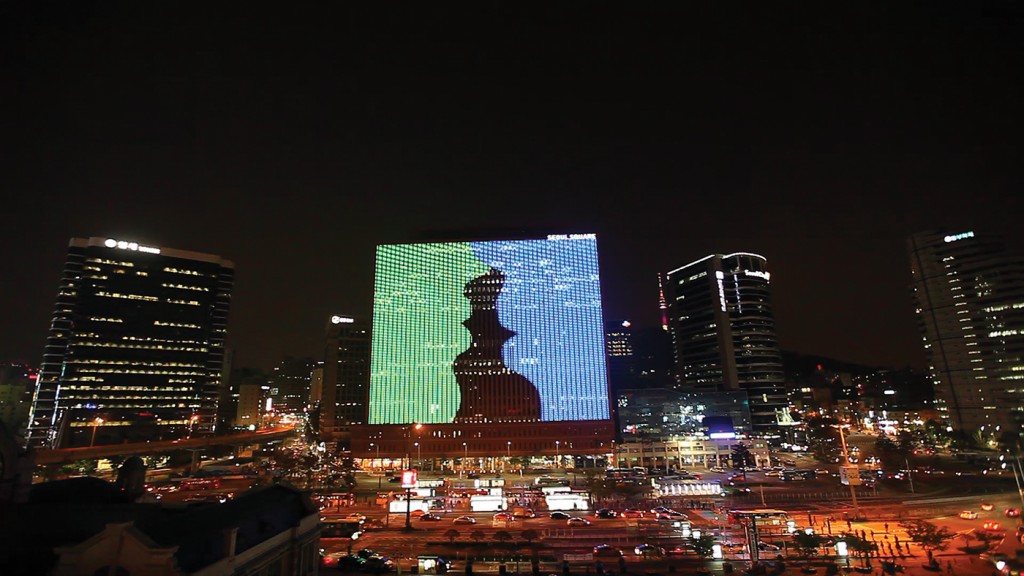 Rafaël Rozendaal, Seoul Art Square, The biggest kiss in the world, 2012. Courtesy of the artist.

Rafaël Rozendaal is a visual artist who uses the internet as his canvas. His artistic practice consists of websites, installations, lenticulars, writings and lectures. Spread out over a vast network of domain names, he attracts a large online audience of over 30 million visits per year. His work researches the screen as a pictorial space, reverse engineering reality into condensed bits, in a space somewhere between animated cartoons and paintings. His installations involve moving light and reflections, taking online works and transforming them into spatial experiences. He also created BYOB (Bring Your Own Beamer), an open source DIY curatorial format that is spreading across the world rapidly.