Pelé In Conversation With Jarrett Earnest 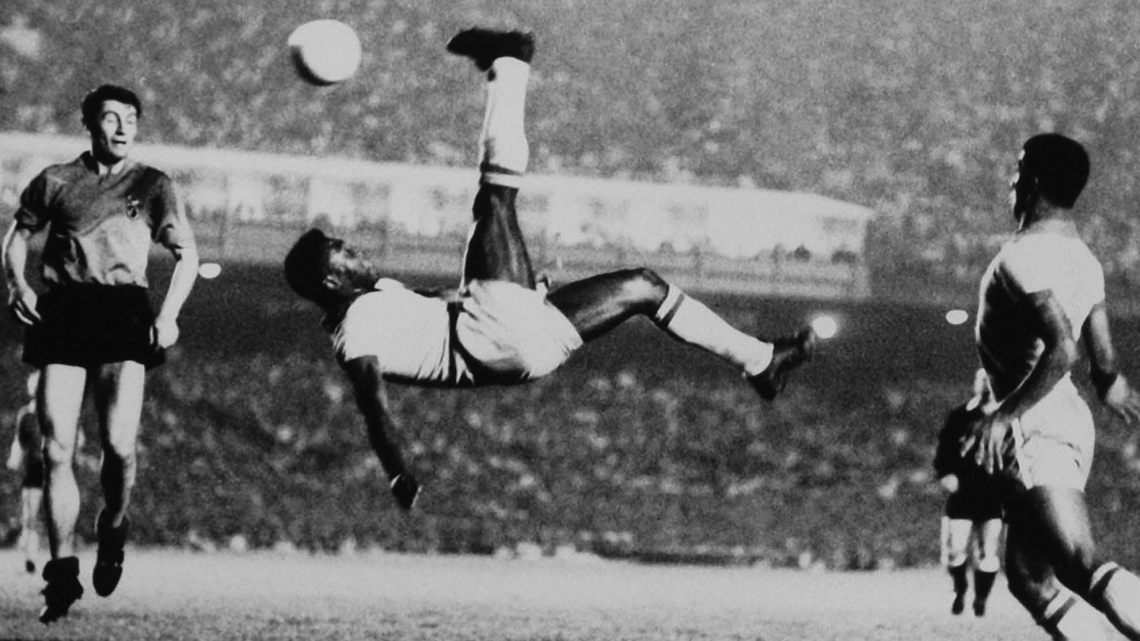 Pelé bicycle kicks for Brazil against Belgium in 1968. Courtesy of the Internet.

Like everyone, I am entranced by the videos of Pelé as a mover. He seems to bend space and manipulate gravity. At 72, the age he was when we met, he was still incredibly poised and gracious. I started by telling him that I am an artist, not a sports writer, “so if the questions seem weird—that’s why.”

How much of the sport is about a quickness of mind and not just a quick body?

I think 95%. Sometimes I am very surprised because a lot of people who write about sports think that it is only about power—to be strong—and that is not true. As a forward you have to think ahead, to know before you have the ball what you’re going to do—where your companions are, where your opponents are, your position on the field. This is something that very few players do; when they get the ball they don’t have a whole picture of the field. I used to tease my son who was a goalkeeper that goalkeepers don’t need to think because they just stay there. That is the biggest difference between the good player and the normal player, being able to think far ahead.

How much of your awareness of everyone’s location on the field was visual perception or bodily/spacial awareness?

In my case it was vision because I have a great facility to see on the sides. Part of this is experience because a lot of players just look at the ball. If you do that the defender will come from behind and steal your ball.

From your first World Cup in 1958 you were filmed and broadcast around the world. Did you see these films later? How did that influence your playing?

It was different then because the technology was different. Normally the coaches and trainers would discuss what happened before and after the game, but at that time they didn’t have the facility to show us the film, so I didn’t see it—today you can see it instantly.

Do you think that the instantaneous quality of video has changed how people play today?

Oh yeah, because the coach has the film to show to the players—”look at what you just did, I want you to go do it differently”—then the young players have more vision about what to do. It helps a lot. When you play against a good player—in my case, every game I had one guy who was like my wife, all over the field where I used to go, he’d follow me. If I had opportunity to see a film of this guy before we played then I’d know his weaknesses, what side to go on—that is a fantastic opportunity.

You’re very famous for the bicycle kick, and a long time ago you wrote that it was not necessarily the best kick for making a goal but that it looks great. I wondered about that relationship between the beauty of the gestures and useful soccer movements. How do they balance or relate?

The beauty of the movement is very important because people come to the field to see a show. Beautiful kicks are important for the show, but to win the game you have to score. I think the combination of goals with beautiful play—beautiful dribbling—is what I’ve always tried to give to the public. Every game I played had full audiences, and before the game I used to ask God: “My Father, if we have to tie the game let’s tie it 4-4, not 0-0,” because I wanted to give something for the people who came to watch.

Because of that I wonder if you think football is related to dancing?

Oh, yes! Especially for Brazilians, they have a talent for movement, for the samba. Football has a natural movement; it’s like a ballet, no doubt.

What do you think people misunderstand about the game now?

What bothers me is the quality of the game because, unfortunately for the new coaches, they want a “tougher” game—they prefer more defense than play. They are not giving a show. I have in my mind that the team who should win is the team that puts on a nice show.

To call it the “beautiful” game seems like an aesthetic distinction; what do you mean by it?

I started to say that when I used to play with the New York Cosmos, because they were mixing American football and soccer, and I used to tease them, saying “Listen: American football is a really tough game. Soccer is the really beautiful game.” In reality the beauty of soccer is that everybody can enjoy it, if you’re fat, you’re small, you’re tall, whatever. And it’s a communication all over the world—that’s why it’s the beautiful game.