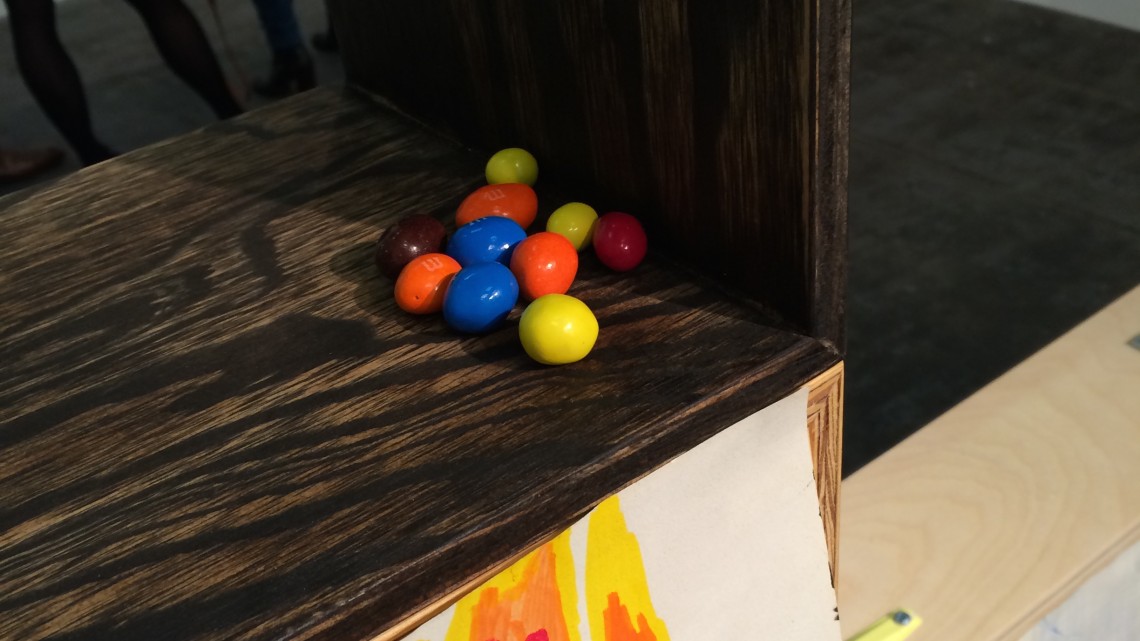 There is something I like about how overwhelming an art fair is. Because of the lack of “order,” the artwork is given the opportunity to speak for itself, away from its context. This means there is no prescription to view the artwork in any given way. The viewer has to do the work, and since what catches one’s eye varies, the experience can be personally empowering. However, there is no getting around that this framework is The Armory Show. I tried my best to find something that I could relate to in the midst of this behemoth of a fair, and I got very lucky. 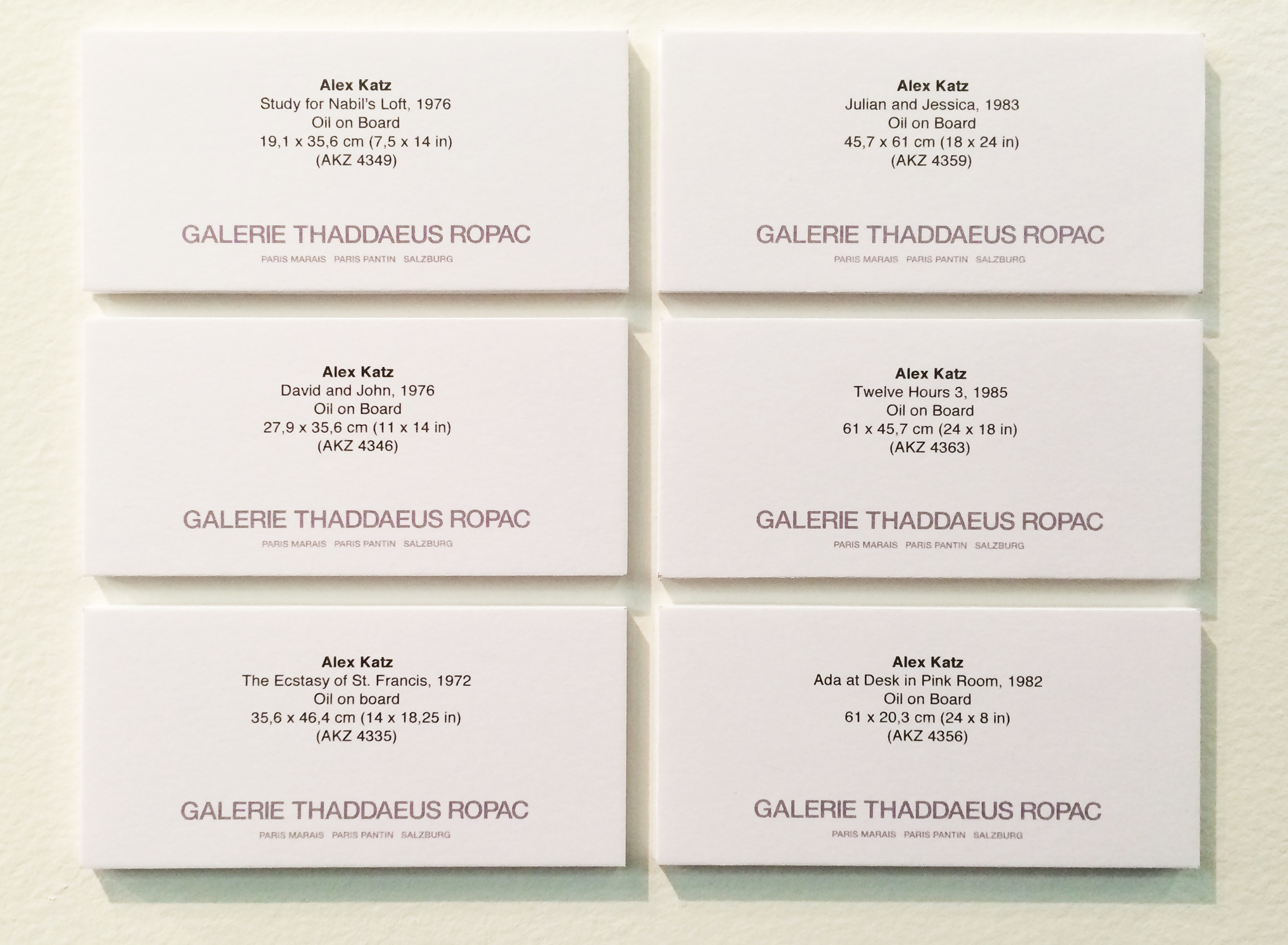 Like most people at the fair, but perhaps for different reasons, I go on a hunt. My first goal is to count how many Alex Katz paintings there are in the whole fair—I count 24—and my second is to find something that excites me. This search lasts for about three hours. I see Sebastian Black’s cool/cute new little spoons at the Clearing booth, an amazing video by William Kentridge titled Tango: For Page Turning from 2012–2013 that I had never seen before, William J. O’Brien’s powerfully disturbing glazed ceramics at Marianne Boesky, John Miller’s Pedestrians, as well as Camille Henrot’s Tropics of Love at Metro Pictures. I almost buy a bag of $4 Kettle chips at the cafe before I realize that there are free bags of chips throughout the whole fair, part of a performance piece by this year’s Armory Commissioned Artist, Abu Hamdan (I do buy a $3 bottle of water to go with them though). 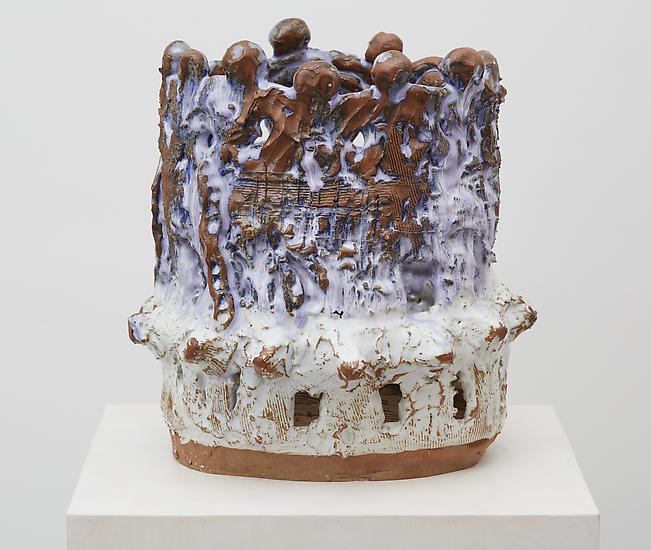 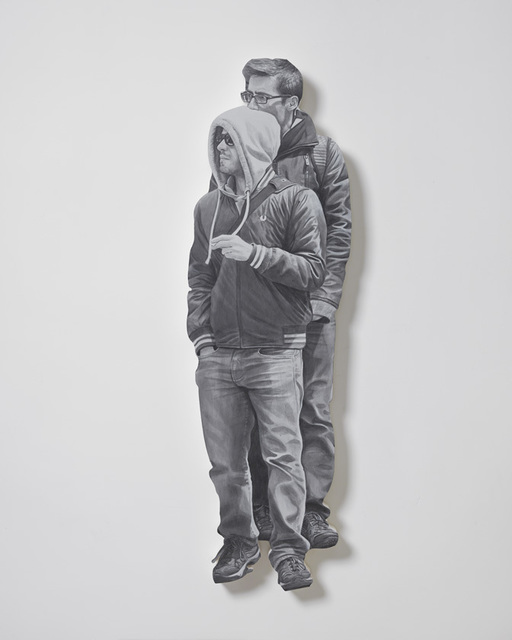 John Miller. Courtesy of the Internet.

Right after my little snack, I stumble across Anna K.E.’s installation structure at the Cologne-based Philipp von Rosen’s booth. Post-Hunger Generation is an arts and crafty assemblage of wooden panels into shelves and rectangular boxes, onto which the artist has glued her colorful and loosely geometric drawings on paper. The wooden structure is handy: the TV monitor has its built-in box and the gallery uses the back of one shelf as storage for the monitor’s remote control, pens, and other office supplies needed at the fair. The video piece depicts a set of hands struggling to open various objects wrapped in clear plastic (you know, those wrappers that are so hard to open) and is a re-iteration of the wooden structure’s direct questioning of the frame. The presentation of compartmentalization mirrors the multifunctional objects we require to streamline our lives—a computer is a phone is a notebook is a TV is a camera is a mirror—but they are still clunky (iPhone 6 Plus.) Like a little child’s Ikea storage space—the artist even placed a few M&Ms on the shelves, or maybe they are the gallerist’s afternoon snack?—Post-Hunger Generation feels almost too obvious, probably because it directly cites the Bauhaus. However, it borrows with a fresh set of eyes adapted to the singular needs of the efficient yet easily distracted human of today. 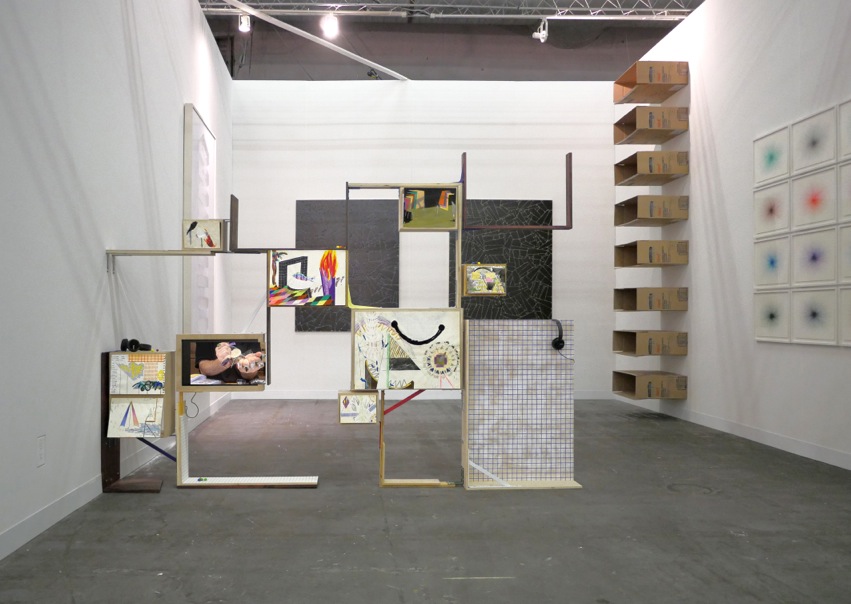 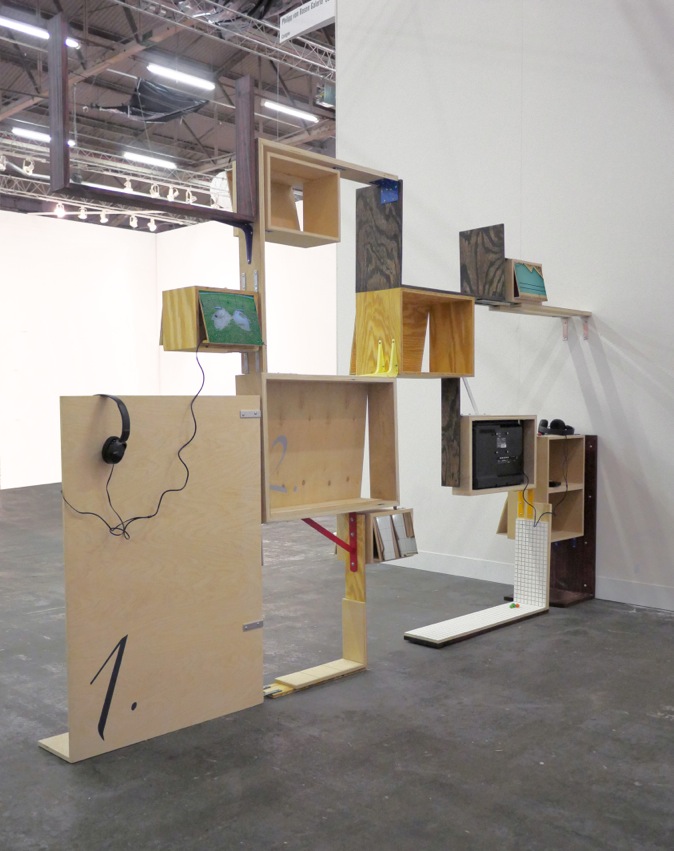 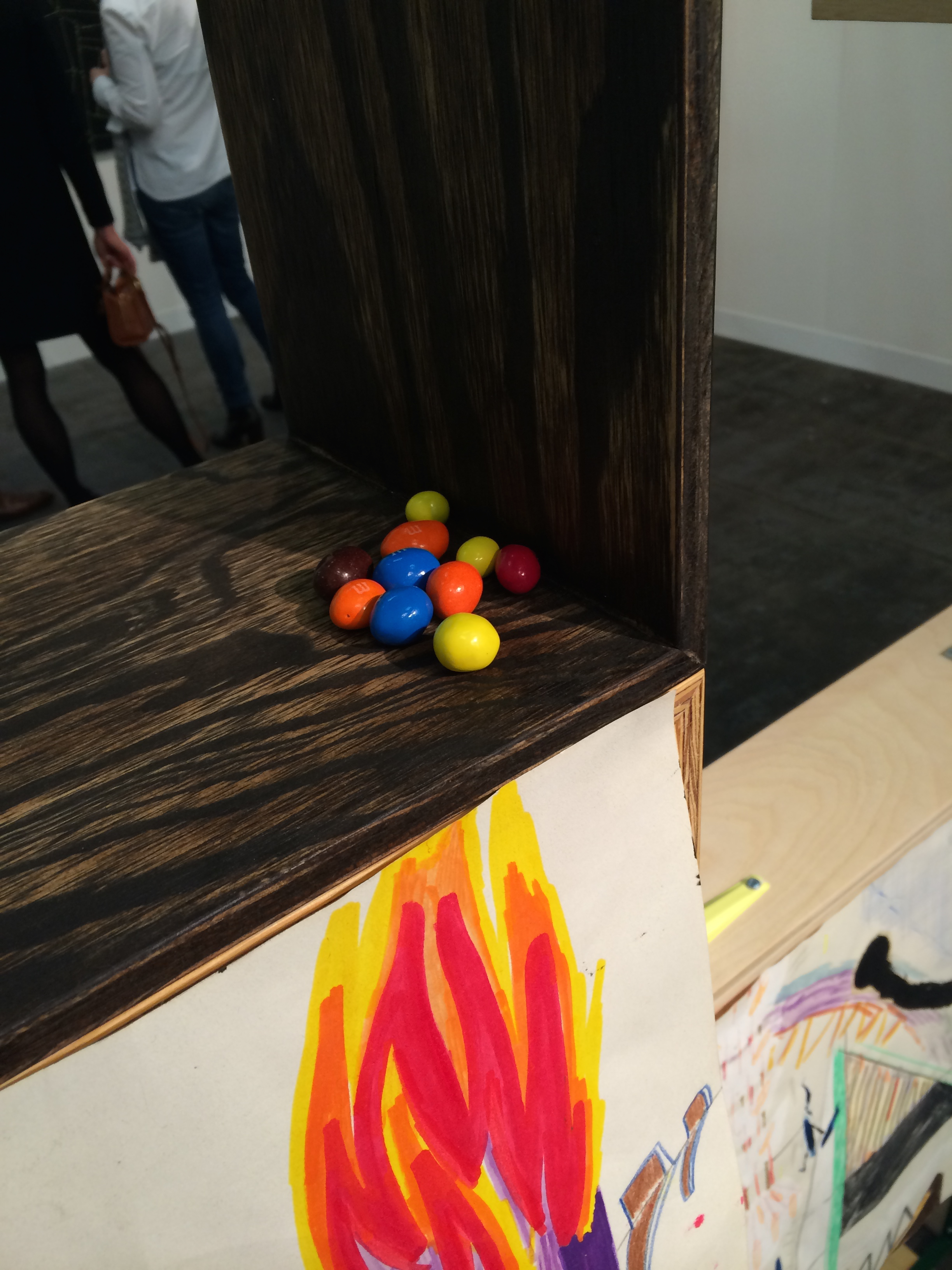 Another really good work is Jumana Manna’s installation at the CRG booth. I am first drawn in by the pop music coming from Blessed Blessed Oblivion, a video inspired by Kenneth Anger’s Scorpio Rising that depicts male thug culture in Israeli car shops, barber shops, and weight lifting. This booth also has four sculptures made out of limestone, mortar, wood, and concrete, vestiges of modern architecture from Silwan, a neighborhood in East Jerusalem, where the artist also made the video. The large white bricks are strong but the concrete is crumbling, and like the men’s sweaty skin in the video, it looks wet. Maybe if I kick one of the sculptures it will fracture, like a sand cake, and change form. Both the sculptures and the video are simultaneously hard and soft, like putting shoes back on sandy feet after a day at the beach, which makes me forget, just for a pleasant second, that I’m at the Armory. 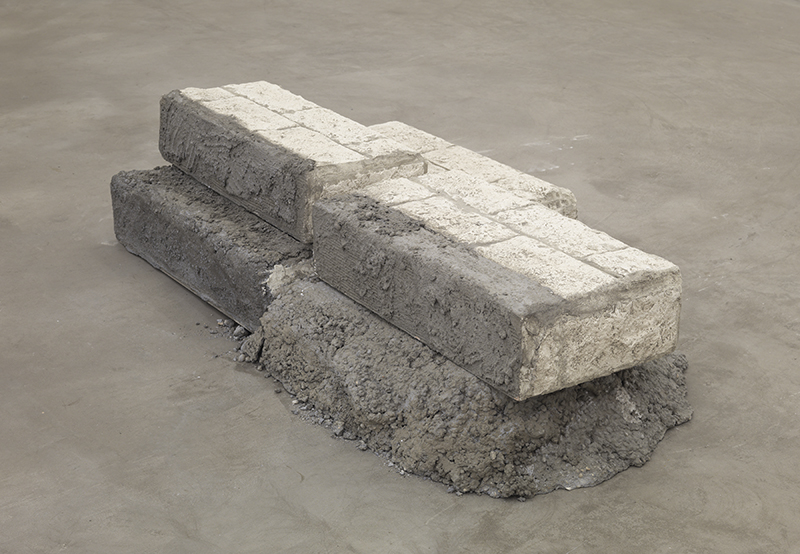 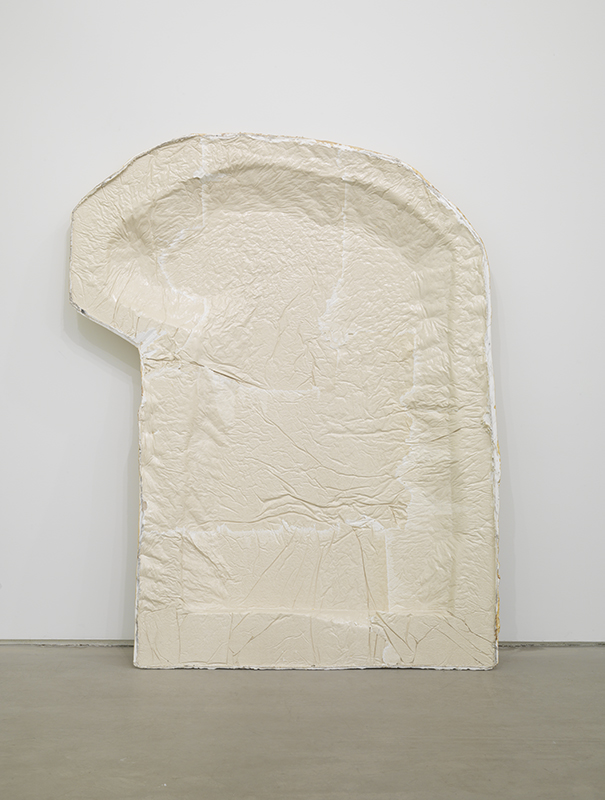 Next post Jesús Rafael Soto & the Potential of Kinetic Energy