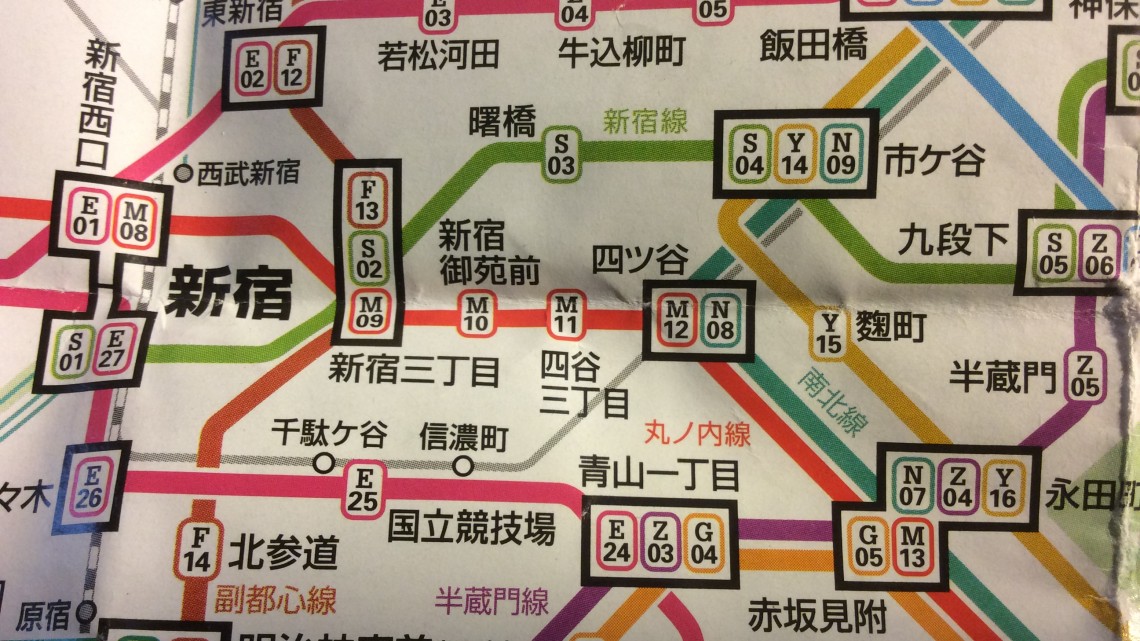 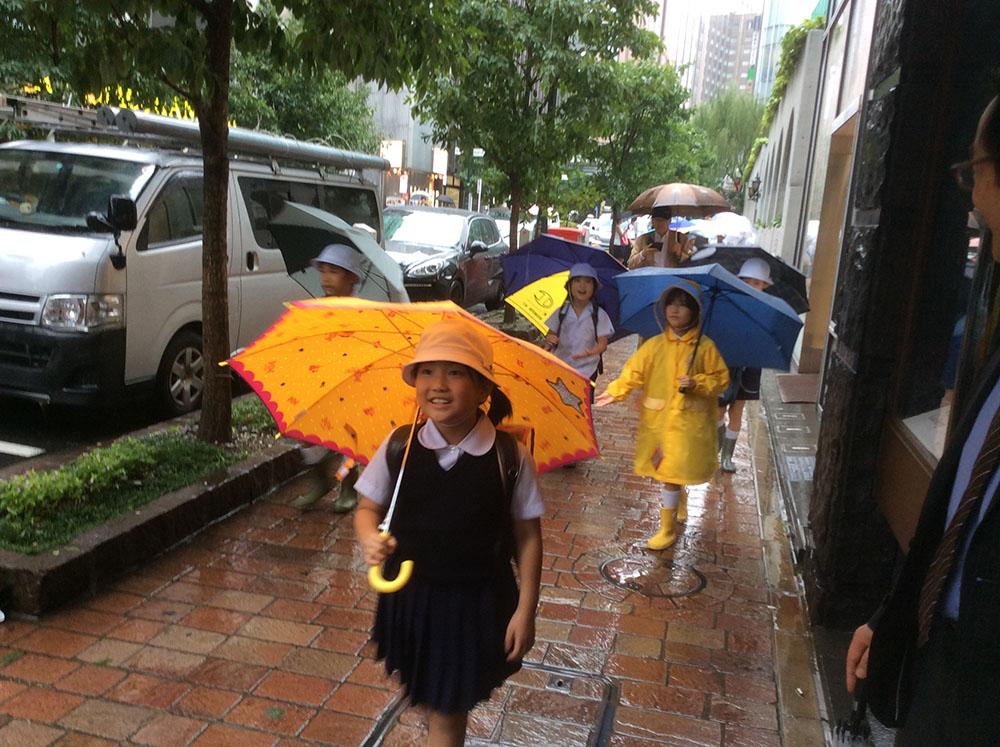 Tropical Storm Etau raged just north of Tokyo during our brief stay, receiving more than healthy doses of rain while we gallery-hopped in efficient subways and immaculate cabs around the city. It was heaven for Californians, who hadn’t witnessed rain like this in years. We didn’t even feel guilty taking prolonged showers and languorous baths, washing off the grime of umbrella and short sleeve weather, shirts drenched by rain and humidity. Like the gusty winds, we roamed the city, randomly seeking the historic and new, saturating ourselves as best we could in the current artistic milieu of the great Japanese metroplex. 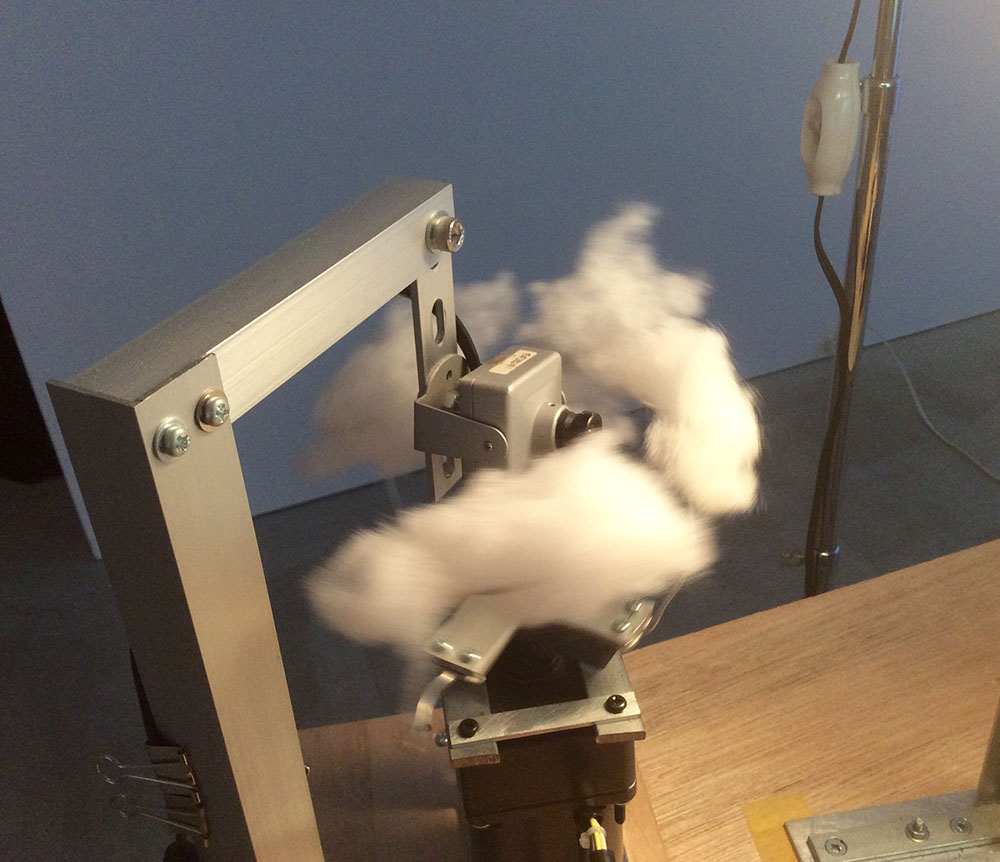 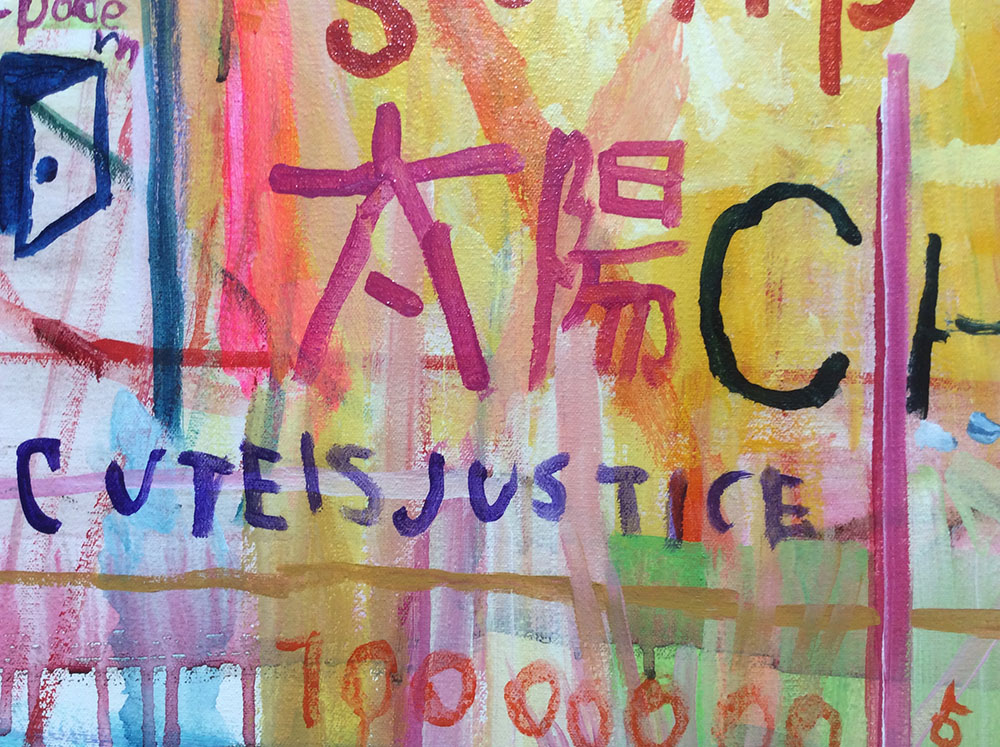 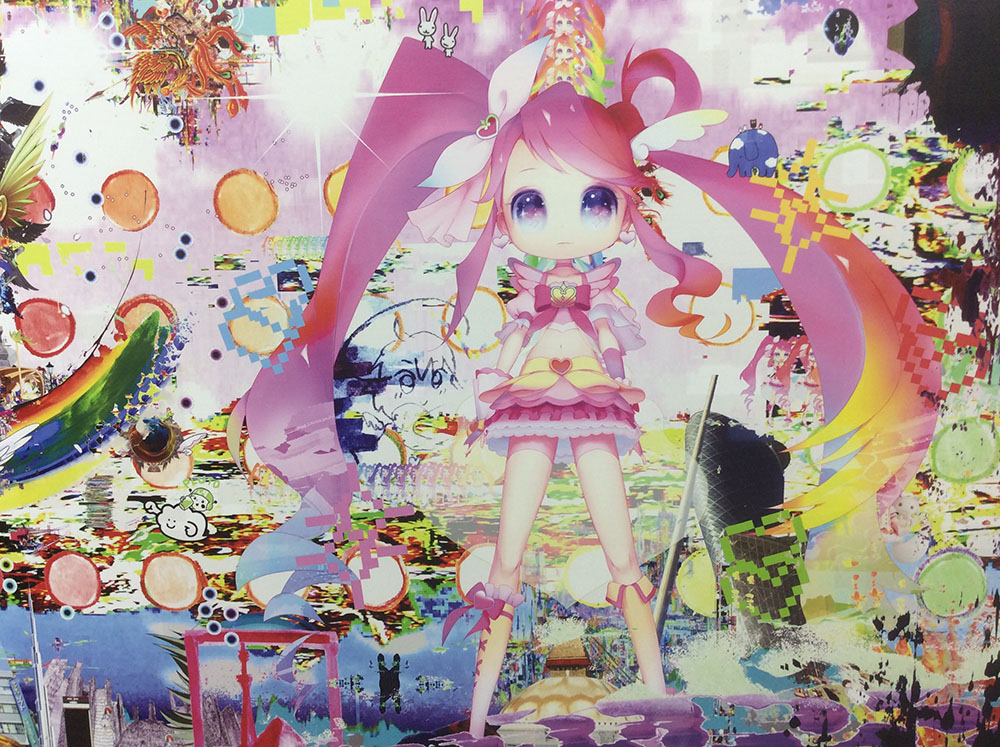 One floor up was Yamamoto Gendai gallery, featuring both a bold contemporary painting show, along with contemporary hard-edge geometric work, video, and sculpture. Chaos Lounge featured a hodgepodge installation of paintings by young artists, including a masterpiece digital/acrylic triptych by Kazuki Umezawa. Japanese Pop has become an easily spotted brand these days, mixing Day-Glo colors with manga characters and smatterings of English and Japanese visual poetry. Japanese “cuteness” is sweeping our Juxtopozed world. One phrase written in English and surrounded by candy color Japanese iconography captures all and nothing: “Cute is Justice.” Other painted works in Chaos Lounge hark back to the anything goes materials of late Gutai—yarn and glitter, acrylic and digitization—all combined into a heady swirl of all-over patterning. Chaos Lounge at Yamamoto Gendai was the most up-to-date work I saw during the stay. 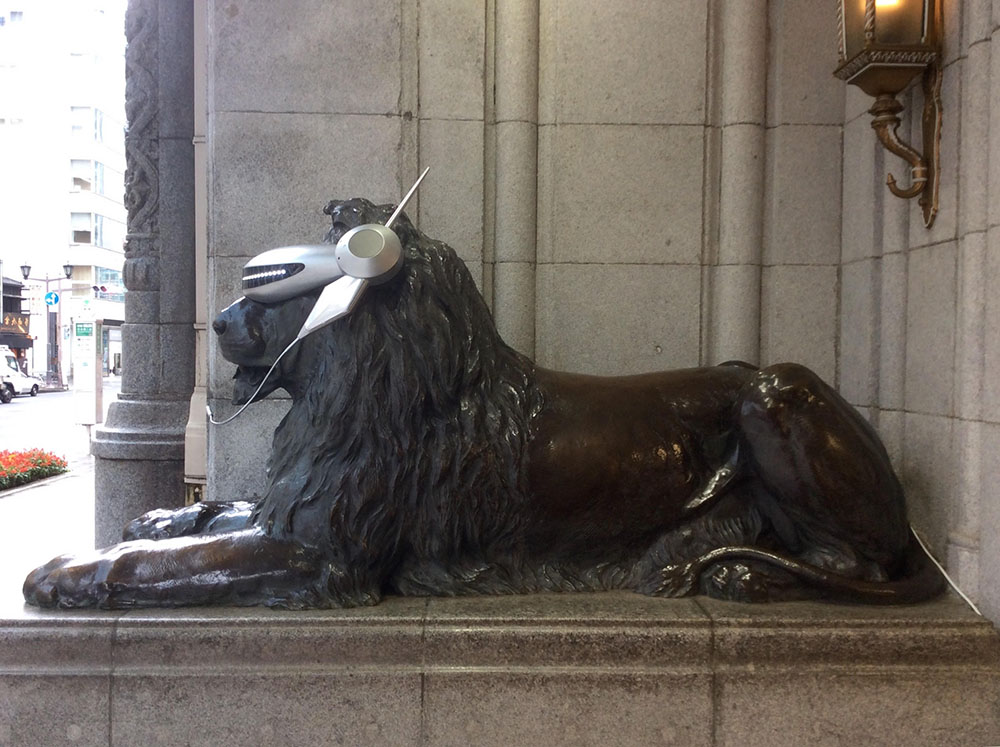 You can find art everywhere in Tokyo, and as most natives know, their prestigious department stores are known for staging some of the best exhibitions. But works of art are not confined to formal department store galleries, they can be found throughout the store. At the upscale Mitsukoshi emporium in Ginza, the fun starts outside, where the guardian bronze lions (as can be found outside the New York Public Library) are outfitted with something that looked like virtual reality headsets. Inside, the manikins are decked out in similar techno apparel.

Day two of our journey began at the New Art Lab located in upscale Ginza, which fittingly shared space with a display of diamonds sculpted by a Russian master of the craft. The art accompanying the jewels were equally dazzling. An offshoot of Whitestone Gallery, which has been exhibiting Gutai artworks over the past decade, New Art Lab had a glittering display of Kazuo Shiraga, Shozo Shimamoto, Yasuo Sumi and Jiro Yoshihara artworks: Yayoi Kusama thrown in for good measure. 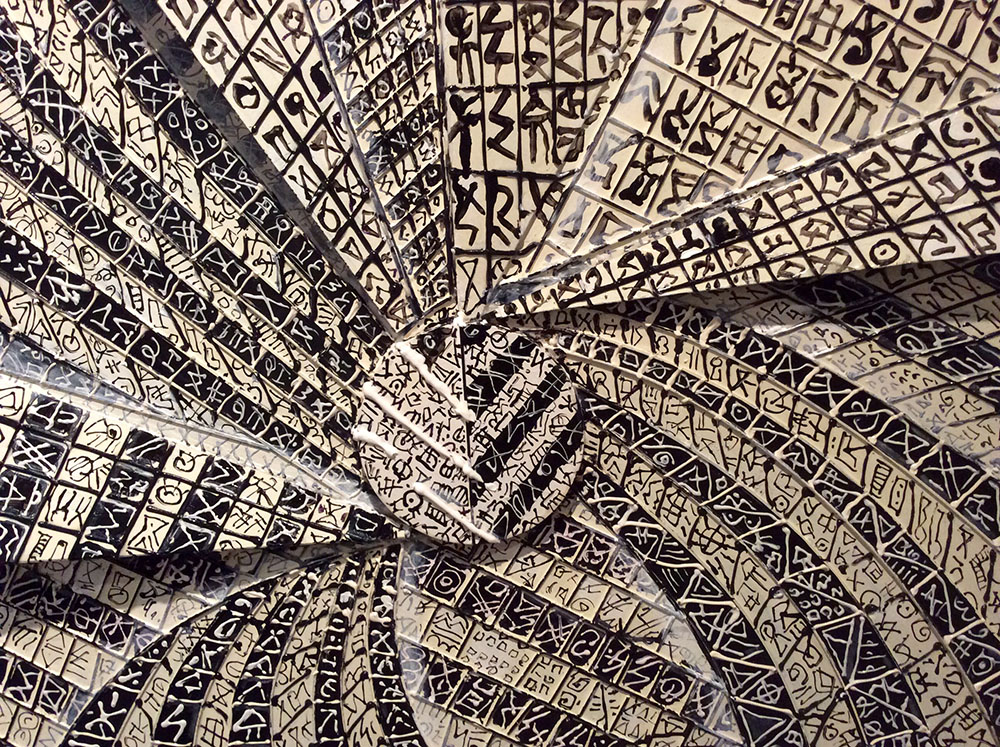 I am not a dispassionate critic of the work. I readily acknowledge my positive prejudice towards all things Gutai. I co-curated an exhibition on the movement in 2013 at the San Francisco Art Institute. The show was dedicated to my correspondent and friend, Gutai member Shozo Shimamoto, who was like a brother to me, having performed with him in both Japan and the United States in repeated meetings over the years.

Meeting Shimamoto in 1986, I knew of his Gutai background, but didn’t know much about Gutai. Outside of a select circle of practitioners and scholars, no one really did. That changed this past decade when books and major exhibits revealed the extant and influence of the movement. Works that were selling for several thousand dollars before these books and exhibitions appeared, now sell for several millions. It is no wonder then, that Tokyo seemed flooded with Gutai. 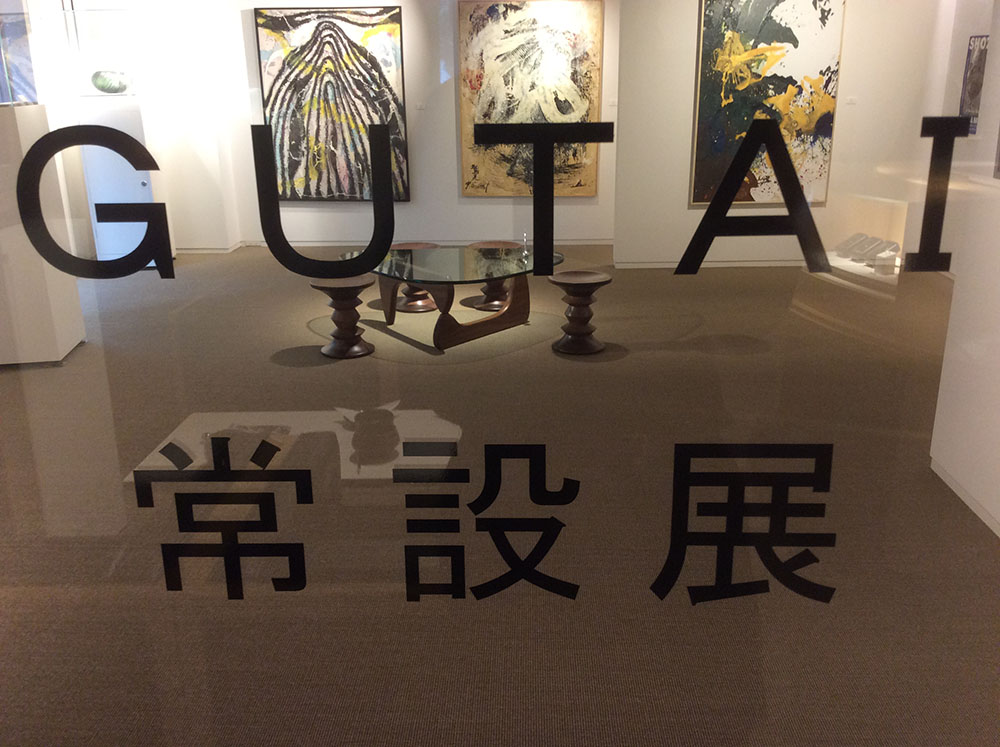 New Art Lab was a stunning surprise, starting with the display of a mid-sized Shiraga in the front window. Inside were more delights, including a hand-painted Yoshihara dinner plate originally given as a gift. The Shimamoto paintings were of a mid-1990s vintage, encrusted with glass from the bottles that were thrown against the canvas during their creation. Truly outstanding were the Yasuo Sumi paintings, which he produced by thrashing the pigmented canvas with an umbrella, the repeated beatings of the hinged ribs of the shade creating a network of intersecting line. Shirga’s painting practice has gained the lion’s share of Gutai ink these past few years. Whether crawling in plaster or painting with his feet, while hanging from a rope, Shirga was notable for creating from inside the work itself. His was an early and significant performative painting practice. Spurred on by the Pollack mystique and acknowledged by Kaprow as an essential forerunner of “happenings,” his works continue to extend the boundaries of contemporary art. 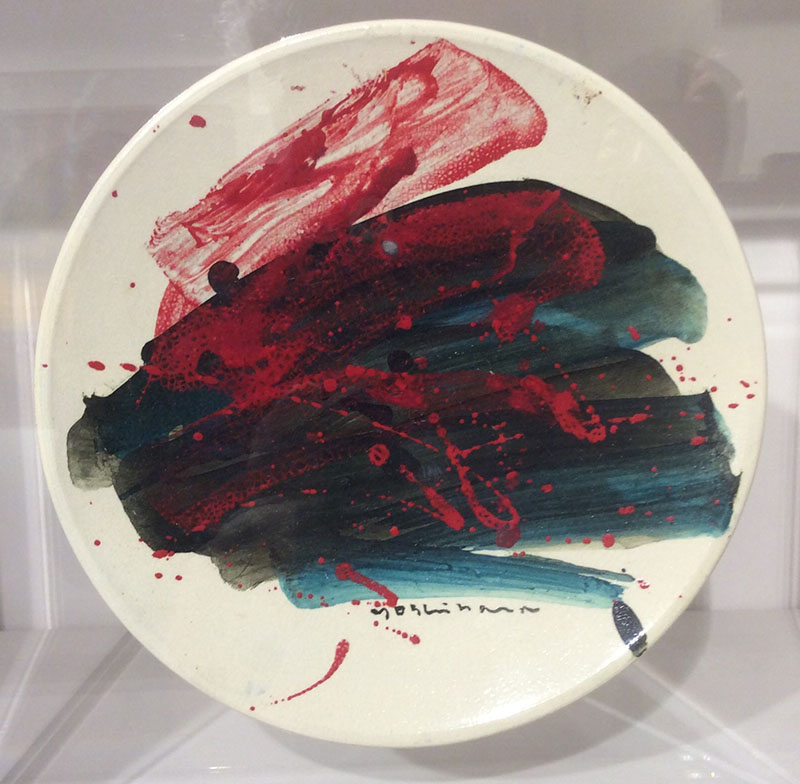 But New Art Lab was minor league compared to it’s tenuously connected big brother Whitestone Gallery. Seven floors of reception, administration, packing and shipping, sales, and immaculate white-walled exhibition venues, Whitestone is a major international kunsthalle in every sense of the word, capable of charming the most wary of collectors by luring them into a cushion of comfort, settling them down with sweets and green tea, lulling them with startling sophisticated art slathered with newly patented patinas of academic and market panache. 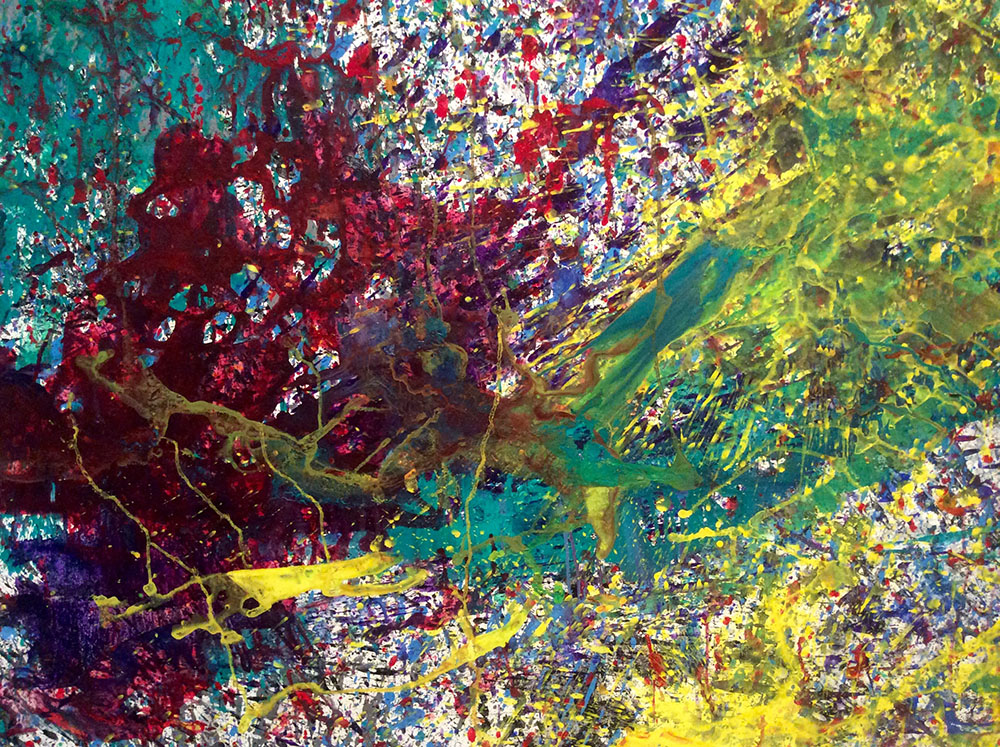 The gallery was closed due to installation of a big Shozo Shimamoto show with a scheduled opening days away (September 15). My old friend is having a moment, as they say in the art world, with simultaneous shows being held in Tokyo, Hong Kong and Brussels (Axel Vervoordt Gallery, September 3-October 3). Works created by hurled bottles of acrylic, saturated by shards of glass, splattered by layers of colors, are now stretched, framed, installed and lit to perfection. What a difference fifty or sixty years make! What was once a throwaway gesture is now a rich man’s decision. Is Shimamoto worth the investment? Will the glass shards separate from the canvas at some point? Does it fit with the rest of the collection? Will my wife like it? And you thought you had it tough!

I am not a cynic. I applauded what Whitestone is doing. It’s a difficult task convincing the public of the soundness and longevity of your passion and the financing of its support. Gutai deserves and demands a showing after the neglect endured by members of the art movement for so long. Having disbanded over forty years ago, it is likened to Fluxus in its long neglect and overdue recognition. 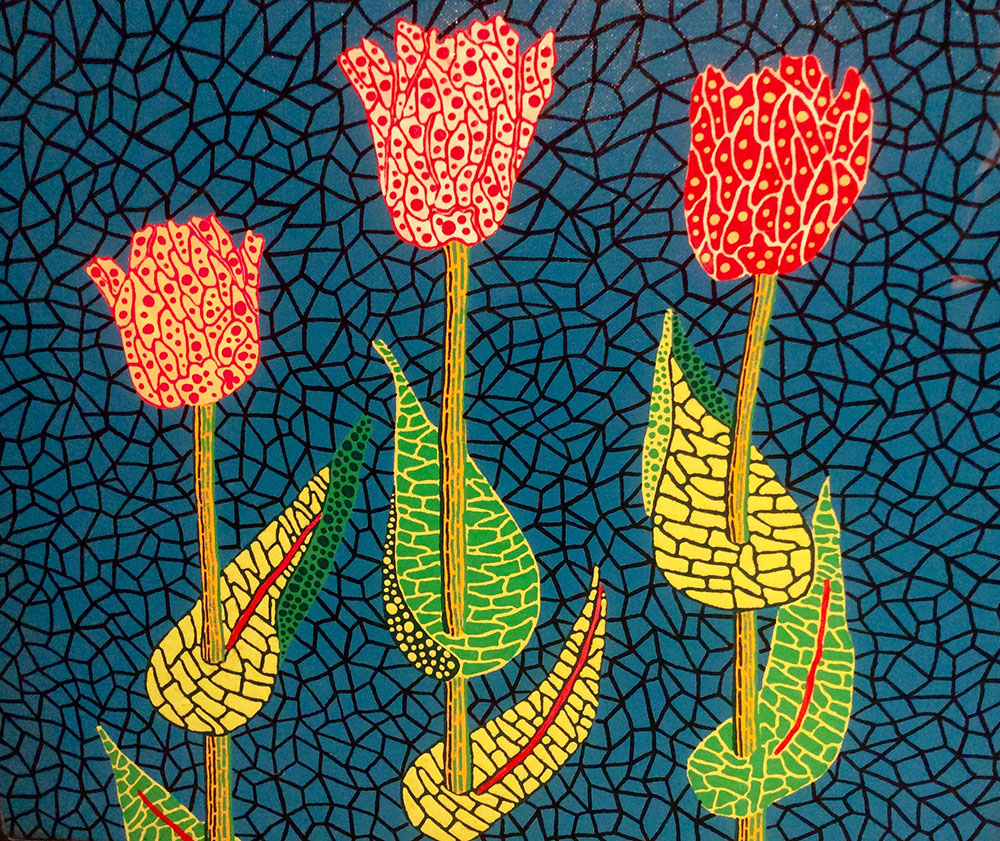 Besides Gutai, Whitestone featured a floor of early Kusama works. New Art Lab had several of her works on view as well. The purportedly reclusive Kusama was everywhere in Tokyo, from high end galleries in Ginza to Narita Airport gift shops spinning out her popular line of keychains, t-shirts, mousepads, and more. New Art Lab artist, thirty-five year old Osamu Watanabe, made the front cover of this month’s Tokyo’s monthly Guide magazine, with an inside story on his creation of works of art derived from his mother’s pastry decoration business. Nearly two hundred glossy pages long, Guide lists hundreds of museum and gallery exhibitions during the current month of publication, and can be found in galleries and newsstands alike. I would have liked to have seen more of the listed galleries during my stay, but the few I was privileged to visit convinced me of a vibrant scene, fully expected of one of our great global cities and more than adequately delivered.

Next post Janice Guy: In Conversation With Constance Lewallen