On Point 2.07: The Loneliness Of The Long-Distance Art Critic 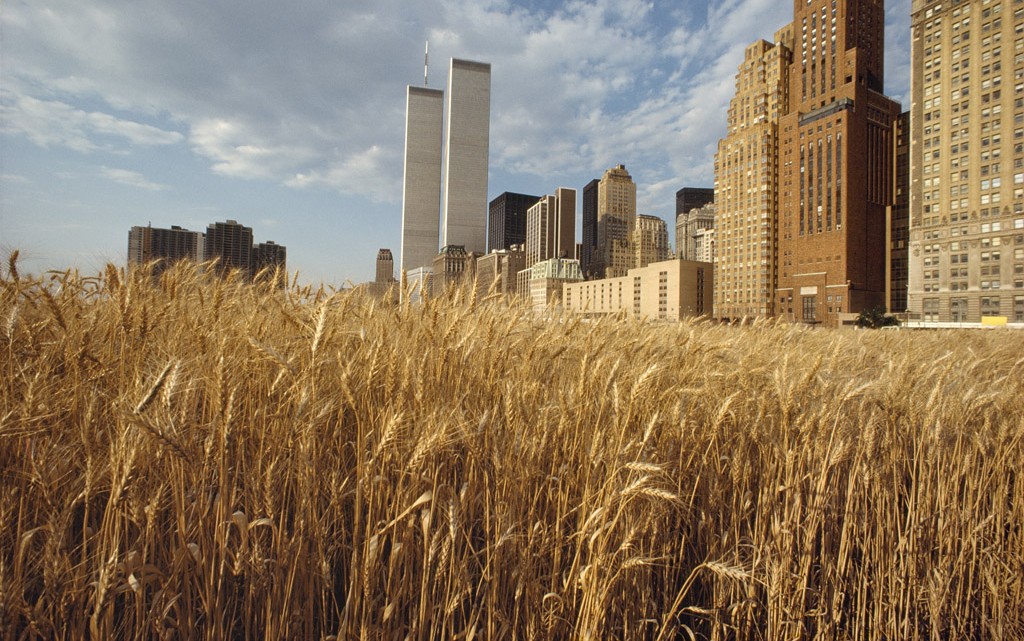 I swear, we were there on time. The website said that the recent incarnation of the Agnes Denes Wheatfield in Milan would be open until 8:00 pm, but when we arrived at a few minutes after five, the site was closed—this owing to the time needed for a small army of caterers and stagehands to prepare for a special event to take place under a temporary pagoda that looked like a younger sibling of the Sydney Opera House. Nonetheless, a decent view of the piece could be had from the fenced-off perimeter around it, which, in terms of square meters, was somewhat larger than the original version that was installed under the auspices of the Public Art Fund at New York’s Battery Park in 1982. Next to the entry gate was a plaque hosting the heraldic emblems of all of the project’s sponsoring entities, some corporate, some government, but mostly fondazioni of the type that seem to have proliferated amidst the permacrisis that is southern Europe. No doubt these entities were providing the honored guests for the ensuing festivity, conveniently coordinated with EXPO Milan, that being the most recent iteration of what was once called The World’s Fair.

As was the case with the original 1982 version, the symbolism of the current Wheatfield remains pointed: at the moment when real estate becomes mega-exponentially more valuable than the land’s capacity for food production, a kind of absurdity sets in, and by calling attention to this absurdity as absurdity (rather than as the mass delusion of “normalcy”) is the point, because food is kind of important. I am told that the wheat will be harvested in the fall, and turned into baked goods that will be given away. From the looks of the large throng of refugees from North Africa huddled in a cordoned-off balcony at the Milano Centrale train station, harvest time cannot come too soon.

One could go on to read the piece as a latter-day ode to the cult of Demeter, sung at a time when the world could really use her help. Yet another reading takes note of the location of the new version: about halfway between Milano Centrale and the new corporate headquarters of UniCredit—perhaps the largest bank in Italy. The former is the world’s most complete and dramatic example of extant 1930s Italian Fascist architecture, while the latter is a hyper-futuristic phallus that towers over Wheatfield and the Milanese skyline like an upraised middle finger of gigantic proportions, the vaffanculo qua non of neoliberal triumphalism. It was not too long ago that UniCredit lost almost a quarter of its market capitalization in a single day of financial hemorrhage in the equity markets. But now it is back—resurrected!—although one wonders how long it will be before the rest of Italy follows suit. As it now stands, the building appears as the neoliberal yang casting a long shadow of Wheatfield’s yin, a lord of the manor surveying his domain of domesticated avant-garde art. 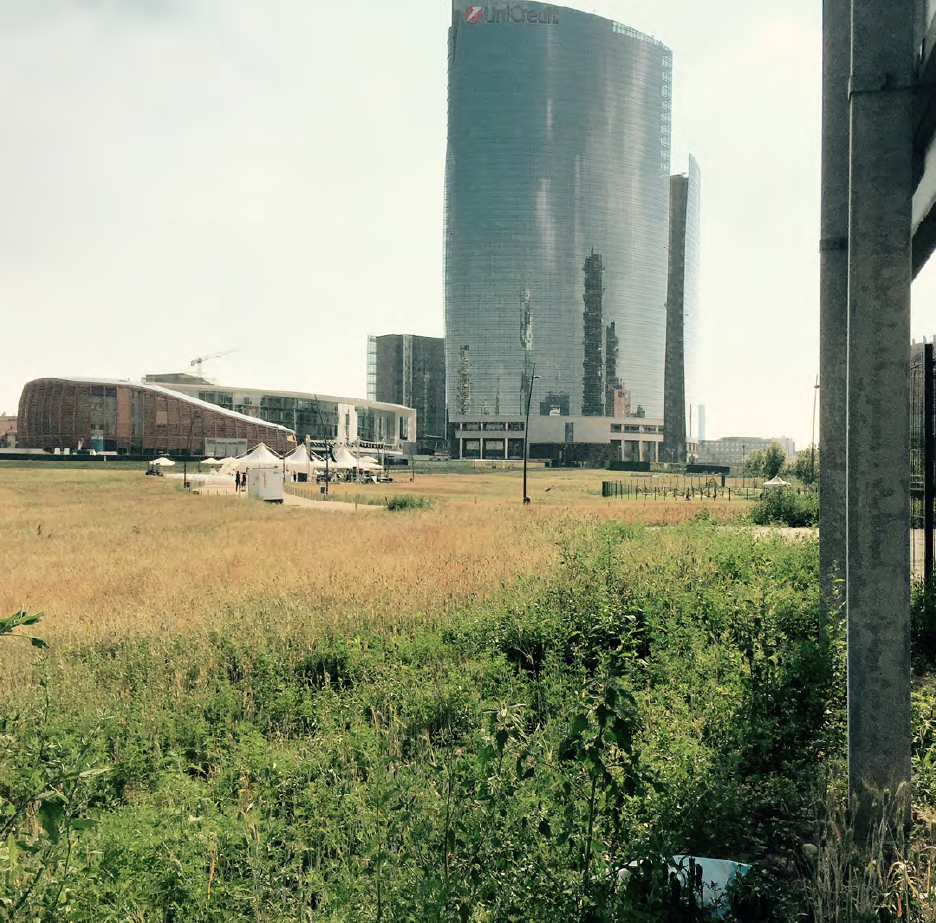 In 1982, Denes’s Wheatfield seemed uncanny and almost surrealist. Part of the reason for this was its close proximity to Wall Street, which at that time had just begun to use computerized trading technologies and electronic fund transfer—removing much of the human element insofar as the international flow of capital was concerned. By placing something so economically fundamental as the amber waves of grain production in such close proximity to the circus of abstractions that was Michael Milken-era Wall Street, an obvious question pertaining to the common good was slyly raised and then answered with an immersive experience that traded intangible abstractions for the tangible reality of earth.

Wheatfield was and still is readable as an eco-feminist editorial on the earlier earthworks projects that were executed by Robert Smithson, Michael Heizer, and Walter De Maria, many initially sponsored by Virginia Dwan, who owned the gallery that sold the editioned “documentations” of said projects. These artists received a lot of attention in Artforum during the early-middle 1970s, but their work was far from the be-all and end-all of land art. Writers such as Anna Chave have gone so far as to read rape fantasies undergirding Heizer’s brutalist upturnings of top soil, and San Francisco’s own Kenneth Baker published an eloquent book in 2008 about the analogy that can be made between De Maria’s Lightning Field (1977) and the unimaginable terror of a nuclear missile exchange. It was a topic that was on people’s minds on the eve of Ronald Reagan’s first term. At that time, a kinder and gentler land art seemed to be called for, and it first came in the form of Mierle Laderman Ukeles’s Maintenance Art projects undertaken with the New York City Department of Sanitation (circa 1972), followed up by Nancy Holt’s Sun Tunnels (1976—in memory of Smithson, who had died in a 1973 aircraft accident). Alice Aycock also did work in this vein during the late 1970s, but the jury is still out as to whether it was land art or public sculpture. Maybe the difference is not as important now as it seemed to be then, but at that time, it was crucial to divorce Earthworks from the realm of the human for the sake of calling attention to the workings of trans-humanistic geological time separated from humanistic biological time—from the standpoint of geological time, biological entities are mere infestations that come and go rather quickly. Thus, the sites of the early Earthworks tended to be the treeless deserts of the Great Basin and the Southwest, not just because they suggested the extraterrestrial topographies of vintage science fiction illustration, but because they were haunted by a remorseless indifference to the periodic bleatings that called themselves “human culture.”

George Kubler’s 1962 book titled The Shape of Time provided inspiration and guidance on this front (especially to Smithson), but when Denes executed Wheatfield, the polarity of humans and trans-humans found a different emphasis. The work did not partake in the remorseless indifference toward the human realm that gave the earlier Earthworks their sublime edge; rather, it showed a kind of nature that could, if given the chance, work in sustainable partnership with the human world, if that human world humanized itself away from abstraction, strategy, and paranoid projection. Not much sign of that ever happening.

To be forlorn is not necessarily to be forearmed. That was the takeaway from several dispersed art viewings in Italy during the summer. One of these was a small retrospective of the work of Charles Pollock presented at the Peggy Guggenheim Collection in Venice, nicely coinciding with the rare presentation of Charles’s brother Jackson’s Mural (1943), which was originally commissioned by Ms. Guggenheim, and is now in the collection of the University of Iowa Museum of Art. Another painting by Jackson that remains in the Guggenheim collection titled Alchemy (1947) was also given new pride of placement, mostly to show off the stunning results of a lengthy restoration that it underwent during the past year. But Charles Pollock is a perplexity. He was ten years older than Jackson, and still managed to outlive his younger brother by 32 years. His early paintings bespoke the influences of social realism and American scene painting, and he flirted with almost every style that came along since that time, including one that was obviously and unconvincingly influenced by Jackson. But Charles’s story gets interesting in 1956, the point when Jackson met his untimely death. It was almost as if a weight had been lifted from his shoulders, and the work that he started doing soon thereafter showed it—largish and foreboding works in oil featuring the interaction of two dark, deeply saturated colors. Think William Baziotes meets Franz Kline. Because Charles’s brother introduced him to the circle of artists that were close to Clement Greenberg in the 1940s, his work shifted again at the turn of the 1960s, this time toward the use of bright acrylic stain painting in the manner of Morris Louis and Helen Frankenthaler. These too were unconvincing: clearly the work of an artist who was trying too hard to fit into a mode defined by the work of other artists—proof that family romances live long and die slowly. Being the responsible big brother is its own suffocating cross to bear.

My vote for the loneliest painting in the world goes to a crucifixion scene painted between 1495 and 1497 by Giovanni Donato da Montorfano. In any normal circumstance it would be worth a great deal of very serious study: a large, mural-like multi-figure composition that makes brilliant use of the architectural space containing it (that being the church at Santa Maria delle Grazie in Milan). In fact, it is a rather epic image, and it elegantly intertwines gospel symbolism with references to the politics of the high-late-Renaissance as they might have been understood in late-15th century Lombardy–one can even see the Sforza castle in the deep background of the center of the image. So why is this painting so forlorn? If your answer was that it is located in some inaccessible mountain monastery, you would be wrong. Many hundreds of people walk past it every day, and almost no one stops to take even a momentary glance at it. Why? Because on the wall of the other end of the old dining hall that it inhabits is another large painting executed around the same time titled The Last Supper, by Leonardo da Vinci. Maybe you have heard of it? 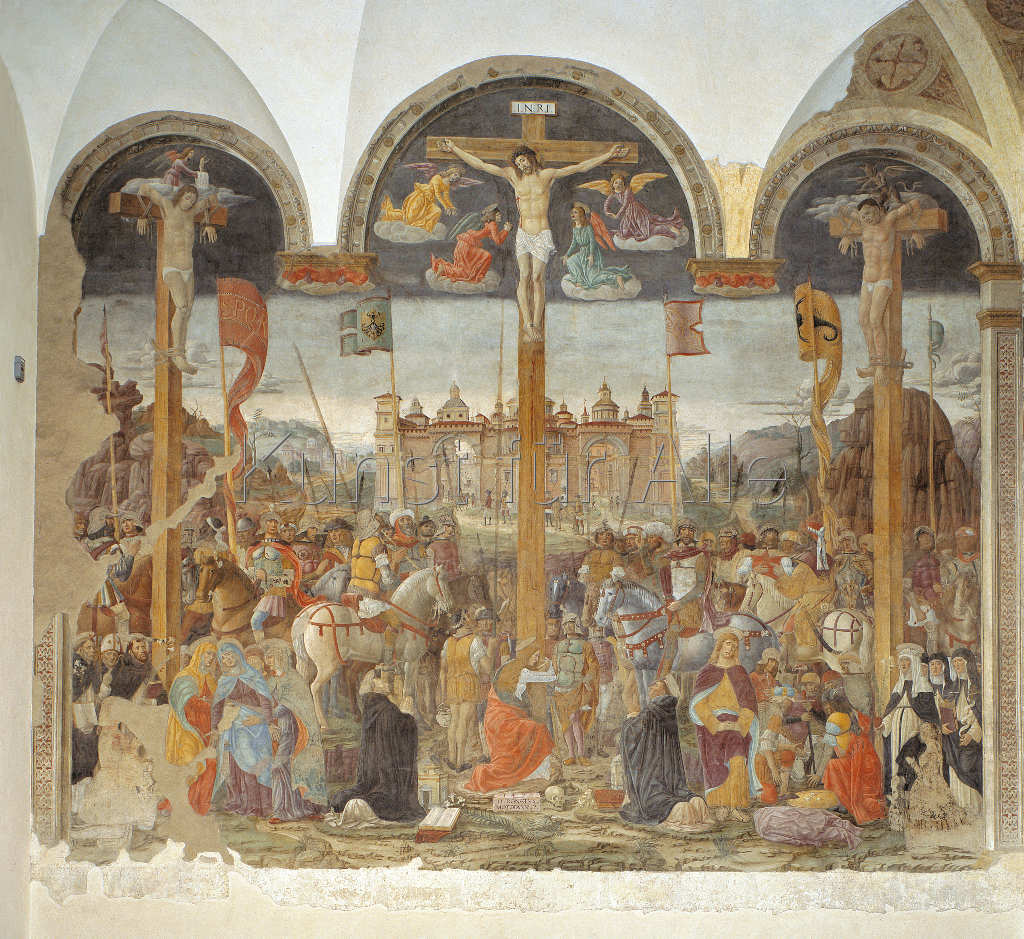