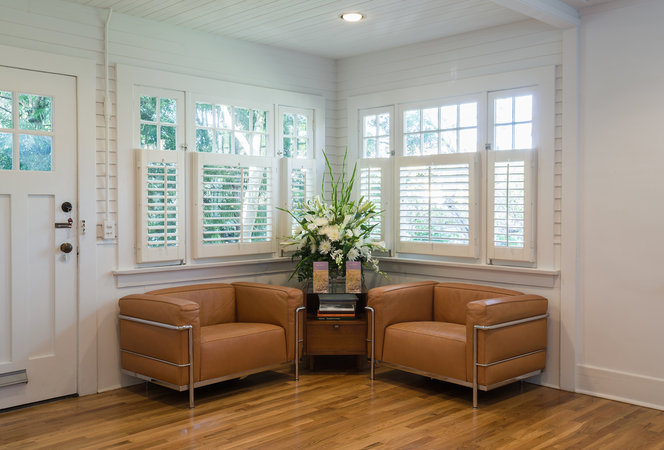 For most, up until very recently, Team Gallery has meant something somewhat distinctly “New York.” Its exhibitions tend to present young to mid-career artists whose work looks, feels, and behaves accordingly, utilizing bright colors, “cutting edge” technology and software, and contemporary vernaculars and senses of humor that can appeal to the youngest of art enthusiasts. Team Bungalow, on the other hand, can be found in the relatively laid back and funky town of Venice, CA. There, Team takes up shop not in a streamlined white cube like their sister gallery in Soho but instead in a domestic space just blocks from the beach, where bikes, rollerblades, hula-hoops and jam sessions are still the most prominent of daily actives.

The gallery is very small, with an arched roof and a wide side entrance. Inside, works are arranged in relation to a now unused fireplace and mantle; there are windows on all sides, adorned with quaint curtains, comfy designer chairs for chilling out, and a hotel lobby-esque bouquet of flowers atop an end table. 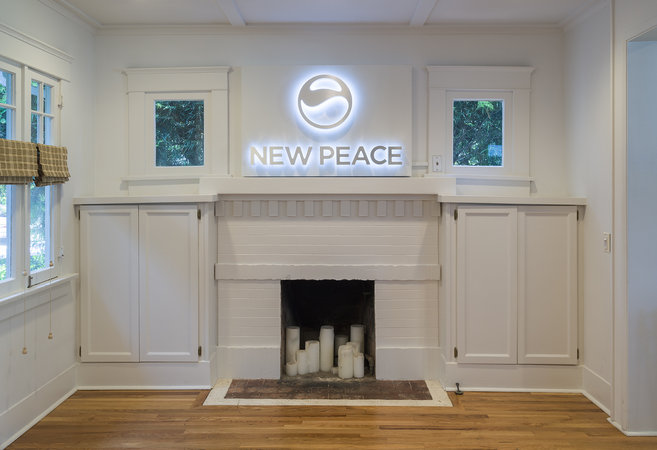 This intimate setting allows for a truly composed exhibition that functions as one comprehensive installation with a whole set of interlocking pieces. Furthermore, this cozy atmosphere becomes the perfect foil for the cult-like vibe of Berlin-based Si-Qin’s solo exhibition, A Place Like This, which hinges on new work that extends his ongoing ‘brand-as-project,’ PEACE, into New Peace—a simulated “spiritual institution.” PEACE debuted in 2014 and consists of a series of Abercrombie-inspired photos with a clear advertising-centric agenda. These images feature the adorable antics of three well built, white young men and one angelic, small-breasted white young woman who appear in various, idyllic outdoor settings. They relax in a lake near a perfectly rugged-looking wooden dock or in a manicured, empty field. In these images, the models tend to wear little to nothing—sometimes a pair of wet, white underwear for the men and a sheer white tank top with matching underwear for the woman. Conversely, New Peace includes no hot young things in any of its imagery. It is instead focused on the inherent natural beauty of plants, rivers, mountains, waterfalls, sunsets, and vast horizons. This is a noteworthy shift in that, while previously Si-Qin’s PEACE images pretended to sell a lifestyle made tangible by the generically attractive substrata of millennials, here, with New Peace, we see land, water trees, and rocks themselves all glossed up and ready to be marketed as consumable goods. 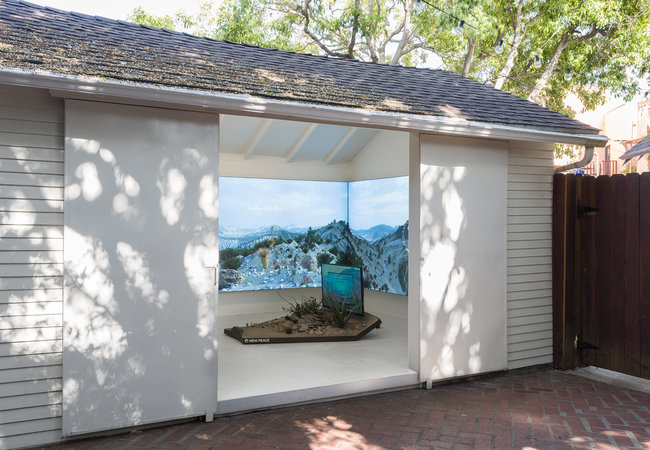 Upon entering Team Bungalow, the flattened out and over-glossed LED screens, presenting this lush imagery of nature, recall the “Euthanasia Poetic Scene” from the sci-fi classic, Soylent Green (1973), in which people volunteer to be humanely killed by the government in exchange for one chance to see, in an epic, surround screen video, scenes from the apocalyptic world’s long lost nature in all its god-like glory. The whole manner in which the scene for A Place Like This is set—with the puffy, tan leather chairs for relaxing placed next to the welcoming fresh flowers, brochures strategically placed nearby, and the fireplace full of white candles of varying heights—undoubtedly promises to exude tranquility, making it clear that you are entering a zone in which you are being sold something. The irony that all of the imagery is of natural wonders is what makes it so sad. 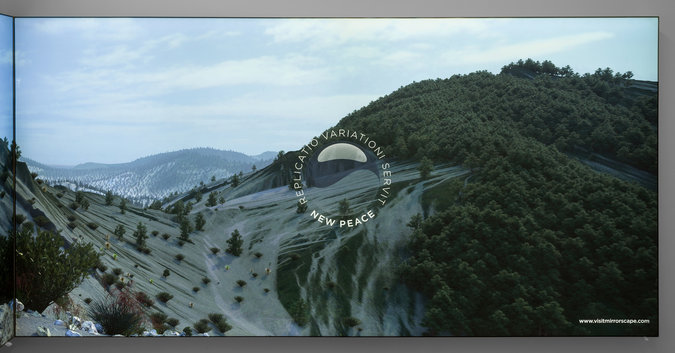 The tone of “the cult,” (particularly apropos for an exhibition in L.A. and even more so in the notoriously hippied-out area of Venice), is palpably intentional. Si-Qin perpetuates this with the undeniable beauty of the works on view, such as the very large scale LED screens conjoined at one corner of the space. One is titled, Visit Mirrorscape 2016: A Land Reflected (2016), which plays a snowy mountain scene littered with majestic green treetops, and the other, On the Path to Mirrorscape (A Place Like This) (2016), shows the continuation of the panoramic view with a denser bird’s-eye perspective of the forest and an adjacent ravine. The second of Si-Qin’s double-pronged approach comes with the over-propagandized façade that the show evokes, particularly with the central sculptural piece, Mirrorscape Effigy 1 (2016), made with powder-coated aluminum, steel, electronics, plaster, sand, plastic botanicals, and vinyl, but which also appears like a miniature microcosmic model mirrored inwards onto itself into infinity. 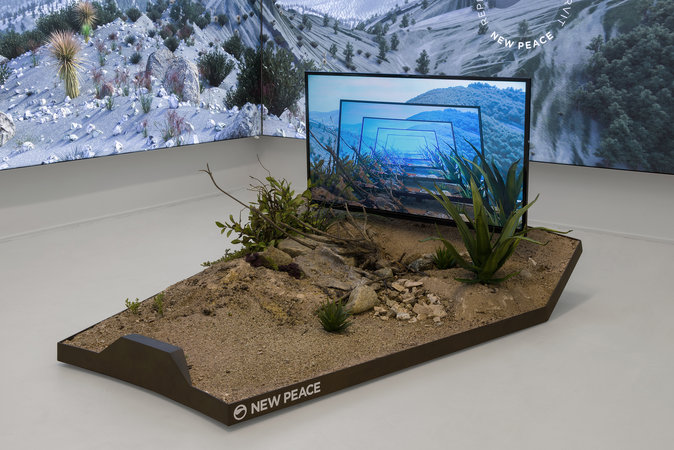 It is precisely this unholy type of blending of the magnificence of nature with the pathetic yet often effective marketing strategies of neatly, individually packaged little stand-ins of something ultimately intangible, which allow for immediate, if not altogether authentic gratification, that is so much at the crux of American culture today, and therefore so clearly at the butt of Si-Qin’s highly stylized joke. Even the diorama-like flimsy-ness of Mirror Effigy 1, along with the “New Peace” logo prominently featured on its frame, speaks to the base level of shoddy production that so many companies that are ultimately in the comfort or beauty business, are all too well known for. The question posed by Si-Qin seems to be, how easily digestible is this scheme for you? How willing are you to allow yourself to be enveloped by the intoxication of these images of natural wonders, which we know could have been fully generated by image rendering software?

At the same time, with the notion of the cult, the spiritual, the all-encompassing organization that New Peace represents, the exhibition also proposes that perhaps the overall feeling that this type of imagery is, and has always been, meant to convey is enough at this point in time: that entire belief systems followed by the many can in fact be founded entirely on the illusion of an image. Ultimately then, if New Peace proves this type of marketing and eliciting of one’s faith to be effective, we can only imagine that the sky is the limit for what future organizations might be able to sell us.