The Preservation of Desire: Amie Siegel’s The Spear in the Stone

In the first gallery at Simon Preston, two of Amie Siegel’s 2015 films play simultaneously and silently, save for the whir of the film projector. Both are black and white, though inverted (invoking the video installation’s title, Double Negative). A swan glides across a lake. Her and her ducklings’ reflections in the water create a strange double image. With ensuing cuts, the swans become farther and farther away, shrinking until they become barely distinguishable from the grey atmosphere. The next cut suddenly moves us on shore, to the stillness of architecture. With sleek pillars, partial balconies, white and curved glass walls, this building could only be the work of Le Corbusier—specifically his Paris Villa Savoye. Opposite this, the second film similarly plays a scene of gliding swans, followed again by a cut to architectural stills. But in this iteration of the scenes, there are more swans, and now something is off again: instead of black, the walls of this building are white (meaning the original building had black walls, as the colors were inverted in the film). The swans too are colored black, instead of white as in the first film—the images thus seem to have been partially inverted. The visual play enhances the eerie juxtaposition of rippling movements in nature with heavy permanence in architecture.

The next film, also part of Double Negative, slowly unravels the mystery of the doubled building. It opens with a scene of jagged grey cliffs, stained with rust-colored streaks, plunging into the sea below. A grey sky pregnant with clouds hints at an approaching storm. Gulls caw. Cut to a swampy wooded environment, then—surprise—the Le Corbusier building again comes into view. While the first two films were gritty in their projection, this film is digital and high resolution, so there is finally a sense of visual clarity. Some exterior walls of the Villa are surrounded—another doubling—by green construction walls. Interior shots capture filtered light, weaving together inside and outside while framing the beautiful geometry of Le Corbusier’s domestic architecture . Despite being moving images, the scenes are still. The filmography is reminiscent of Siegel’s other film works such as Provenance (2013), which also debuted at Simon Preston and traced one of Le Corbusier’s signature chairs from its contemporary context in luxury homes back to auction at Christie’s, ending at its original site of Chandigarh, India, where the chairs were designed in the context of a larger village. At this final site, the chairs that once seemed too precious to touch are piled in heaps, torn and used only by telemarketers. The chairs became iconic over the period of the film, even to a viewer who had never before seen them, but they are simultaneously framed as mere subjects in a series of sites of value production. 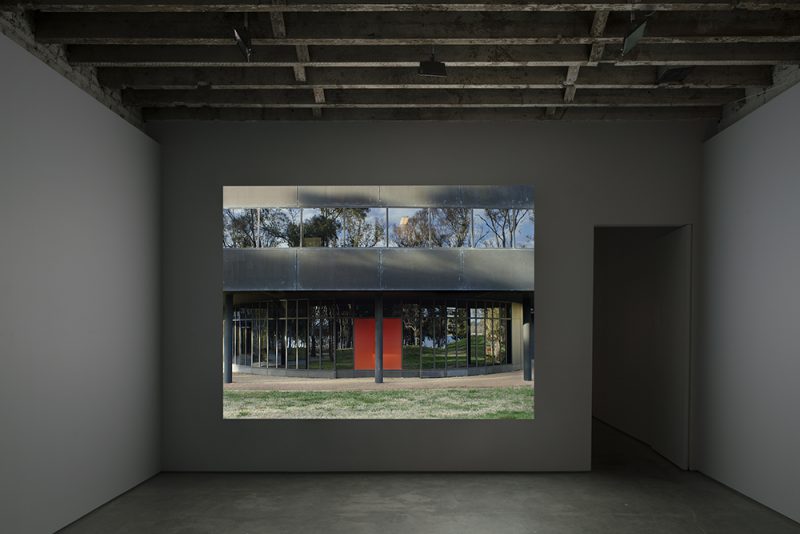 In Double Negative, the Le Corbusier Villa is again made iconic in its repetitive display, from multiple angles, which creates value in two different ways. Subsequent viewings of the film reveal something that seemed familiar to be in fact quite different, like the inversion of the swans’ colors. Here, in this next cut of the HD film, we return to the sea, a different sea from the first. Red clay cliffs contrast starkly with the bright blue sky. No storms brew here. Savannah and tall grasses clearly distinguish this site from the first. Then, there’s Le Corbusier again, except the building is now black. It could be the same house, painted, but the glass is tinted, and the establishing shots reveal the environs to be quite distinct. Again Siegel’s camera moves inside the house, but here the scenes are of industry and production, not solitude and filtered light. A man works at a desk in front of a computer screen and tape machine. Another man in the next room announces, “Take one,” and begins the audio on his tape machine, a conversation in a foreign language. The computer screen is saving this audio, re-recording it. The next cut closes in on the tape’s label: Australian Institute of Aboriginal Studies and Torres Strait Islander Studies. The Institute has apparently taken over this duplicated Le Corbusier building, and is now working within it to copy the audio once recorded to preserve the language of Aboriginal tribes. Here, culture is commoditized.

As a site of labor rather than display (as the Paris Villa seemed to be preserved), this black Villa is a site of maintenance labor, somewhat unskilled and invisible when best performed. In the ensuing cuts, more workers in front of other desktops and screens continue to manipulate the video and audio footage of the Australian Aboriginals. They watch the audio levels to ensure that the speakers’ voices are properly duplicated and delicately weave the tapes to ensure that they run smoothly. Reminiscent of Sondra Perry’s 2-channel video Lineage for a Multiple-Monitor Work-station: Number One (2015), Siegel’s Double Negative reveals the screen to be the ultimate site of reproduction, though in a strangely technical, sterile environment. Whereas maintenance labor is typically conceived of as a type of domestic labor, the maintenance of archival material is here nearly scientific or industrialized; one woman cleans a sheet of negatives with pressurized air to remove any dust before scanning the entire sheet in a large format scanner. Another man at a nearby desk closely inspects his own sheet of slides. In another part of the institute, a man carefully handles styrofoam-wrapped artifacts with white-gloved hands, selecting some to load onto his cart. Meticulously labeled and security-controlled, the Institute might, at first glance, resemble a biology lab. The selected artifacts from the cart are next photographed in isolation on a beige backdrop with a mechanically controlled camera that descends into the frame, as though it were a microscope. Finally, the last scenes show a man weaving film strips into reels to re-record visual footage of the Aboriginals. By tightly cropping his hands, Siegel fragments the bodies involved in the reproduction; they nearly become part of the machines. 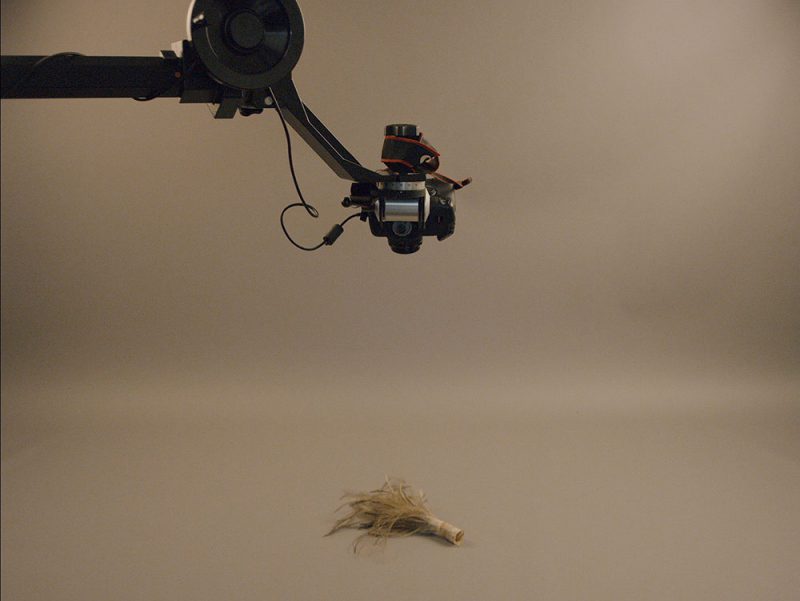 This comment becomes a bit unsettling, however, when one notices that none of the workers in the Institute are black—only the Aboriginals. The methodical inspection, observation, and recording of the audio and visuals representing the Aboriginals are then a disturbing sort of anthropological, colonialist undertaking. The Aboriginals are like specimens to these workers, equally important to preserve as the footage of their rituals. Indeed, in some of the footage being recorded, two white men come into the scene, whispering to each other and taking notes in their small books as they glance back at the bare-chested people in front of them. They communicate tensely with the Aboriginals, agreeing to film only at the quarry, “No secret places.” Because the footage they have recorded is, in the Institute, processed through more contemporary means, the viewer readily identifies with the workers rather than the Aboriginals, who live in an environment not inhabited by most gallery spectators. As viewers we participate in their objectification. 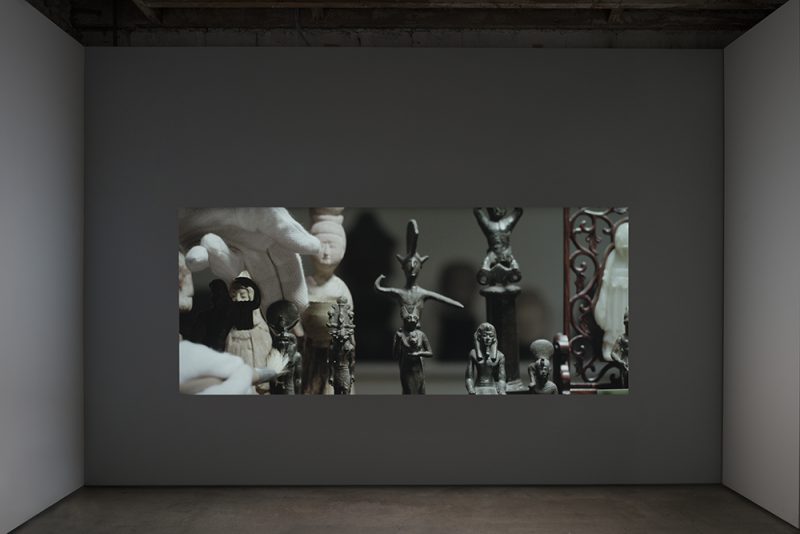 The uncanny doubling and obsessive concern with “historical” subjects continues in Siegel’s next video, Fetish (2016). Yellow light illuminates sculpted figurines and carved artifacts in vitrines. The camera pans across the glass shelves, then cuts out to show the whole room as the lights click on. This is Freud’s living room. Another type of maintenance worker—who this time truly engages in domestic work—moves through a series of rooms, followed by the camera. He pauses at each shelf, each surface, to brush the tiny items on display, removing dust particles. It is undeniably satisfying to see the specks of white dust drift away in streams like rising steam. The worker’s hands are again fragmented, and apart from these movements, the scenes are largely still. The rhythm of the film comes from the swishes of the brushes and grating sounds of figurine bases turning on dirty surfaces. While each element is dusted, one might begin to wonder how frequently the home is cleaned. As part of the Freud Museum in London, these objects are doubly (again) works of art: as artifacts purchased by Freud and as works preserved by the Museum as part of Freud’s home. His home, even his values and desires, are preserved through the fetishization of his possessions. 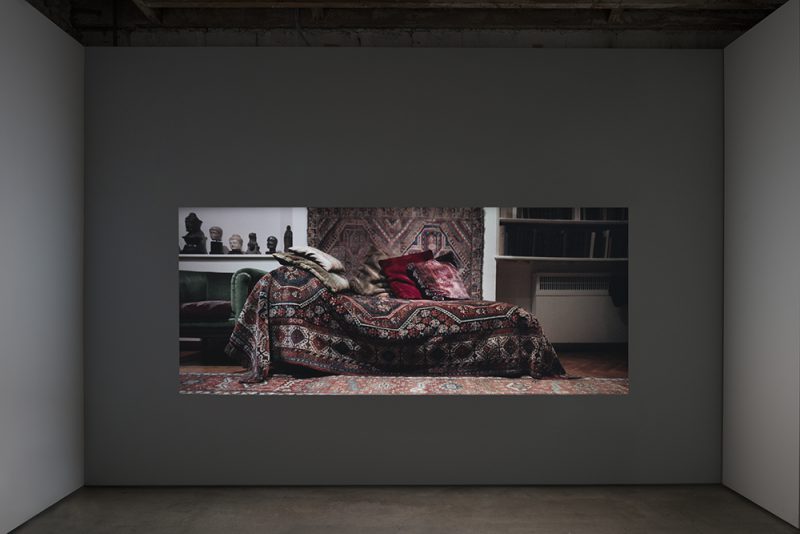 Lastly, of course, the film cuts to Freud’s couch. Two workers carefully remove velvet pillows and stack them on the neighboring sofa chair. They gently lift and fold the Oriental rug on top of the sofa and place it on the floor. Below the rug, a white sheet has been protecting the beige sofa. This layer, too, is removed and folded wordlessly by the cleaners. The sofa is then vacuumed with a tiny portable machine. Something about this feels artificial, though. The sofa is only vacuumed in certain spots. Only the fronts of the figurines are dusted, not their backs. The rug covering the sofa is not cleaned, and neither is the sheet. Was this staged for Siegel, or is it an authentic routine? It would be wonderful to believe that, if Freud were here, he would be analyzing the Museum’s preservation policies—are the Museum workers anal-retentive, or just expected to be? As they attempt to duplicate the original conditions of Freud’s home, the workers are necessarily observed, categorized, psychoanalyzed again by the viewers. Jumping between Fetish and Double Negative, by invoking the spectator as an agent of objectification alongside the Institute researchers and Freud Museum cleaners, Siegel has created two works that translate desire into preservation, haltingly participating in the same system they ridicule.