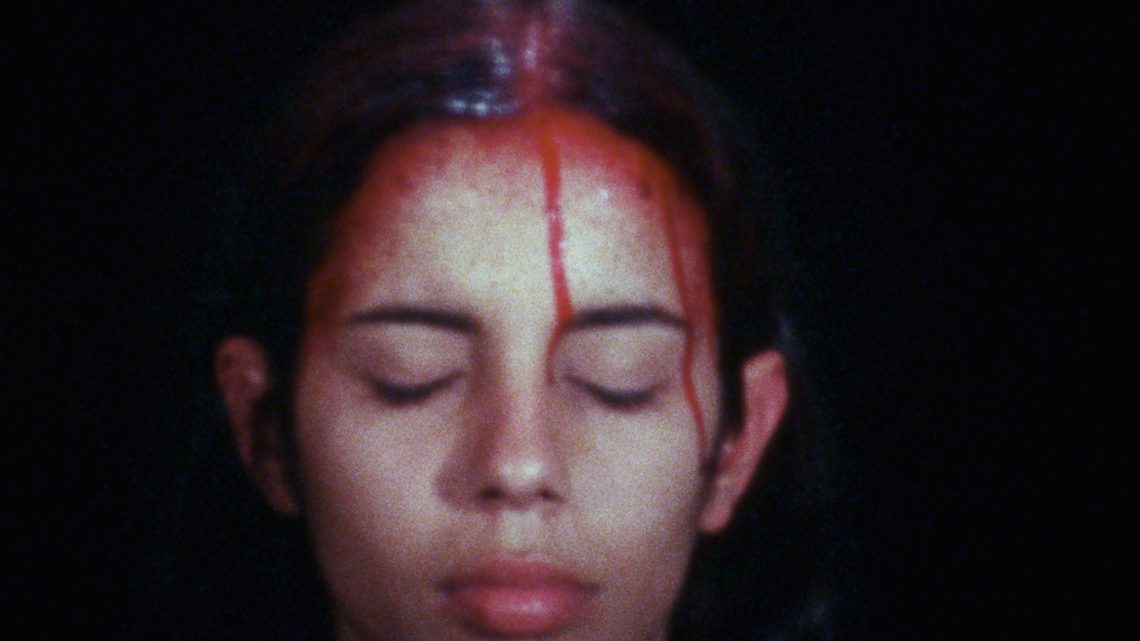 Covered in Time and History: The Films of Ana Mendieta at BAMPFA showcases 21 recently preserved and little-seen films, in addition to a selection of related photographs. The show is the largest grouping of the artist’s films ever presented in an exhibition in the United States. The original films and videos have been restored and transferred to Blu-Ray. A long shot of Mendieta’s delicate face with closed eyes fills the screen, scenes of her small feminine figure both naked and clothed painting with bloody hands, her nude kneeling figure before a mirror planted in the landscape, and her body buried under rocks at Yágul, an ancient Zapotec site in Oaxaca are some of the films projected on 10 screens that face each other in a large rectangular room. Other films feature the Silueta (Silhouette) series that uses the imprint of her own body on the earth; her performances fill the imprints with fire, earth, crushed flowers, sculpted mud, or ignited gunpowder. In Creek, San Felipe Creek, Oaxaca, Mexico (1974), the clear water running over her body, her face down, captures a silueta of water, caused by the body’s interruption of the natural flow of the creek. 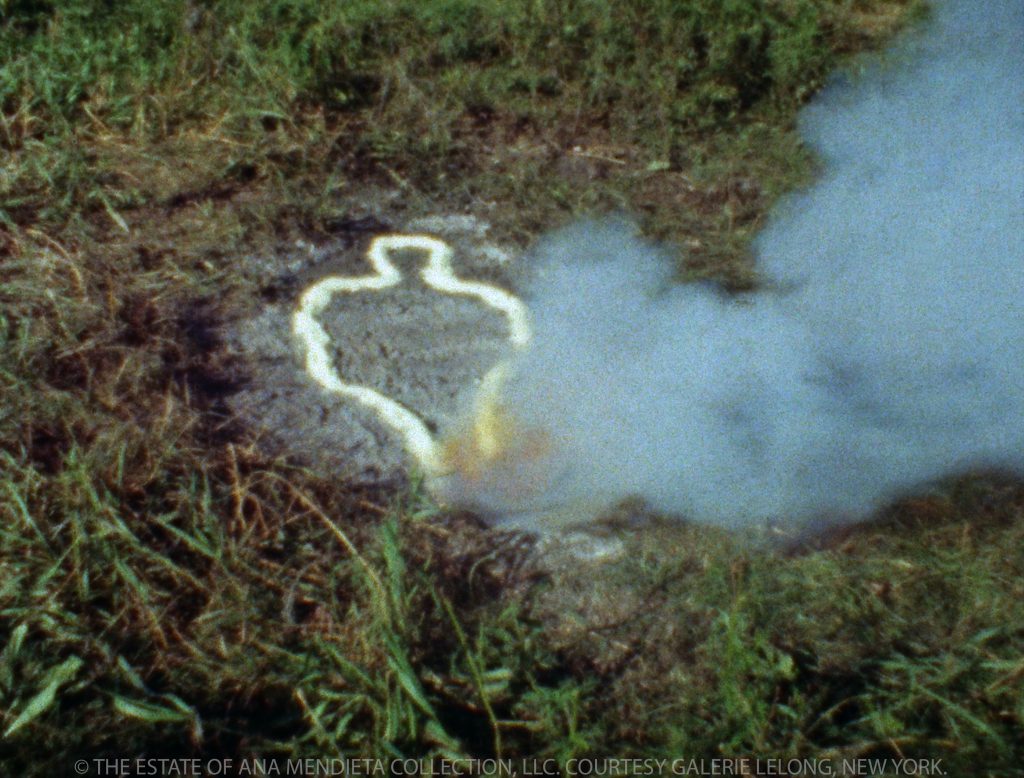 Who is Ana Mendieta? Mendieta was born in Cuba but was sent to Miami at age 12 in 1961 as part of Operation Peter Pan, an initiative that brought 14,000 Cuban children to this country between 1960 and 1962 under the guardianship of the Catholic Church. She and her sister grew up in Iowa, where she was later sent to reform school and both sisters lived in a series of foster homes. She died at 36 years old in 1985 when she fell out of the window from her 34th floor apartment in New York City. We are still left with the question: Did she jump, was it an accidental fall, or was she pushed by her husband artist Carl Andre? The circumstances of her death remain unclear to this day. Andre was subsequently tried for her murder and ultimately acquitted. At the time, her death created a firestorm and divided the New York art world.

“‘You have to understand she came to America with nothing,’ says (artist friend Ted) Victoria. ‘That sense of exile was something she carried with her as well as a fierce independence of spirit. She would talk about it sometimes when she’d had a few drinks. I mean, coming from the heat and fire of Cuba to puritan Iowa would leave its mark on anyone and she had that survivor’s spirit.’”[1] 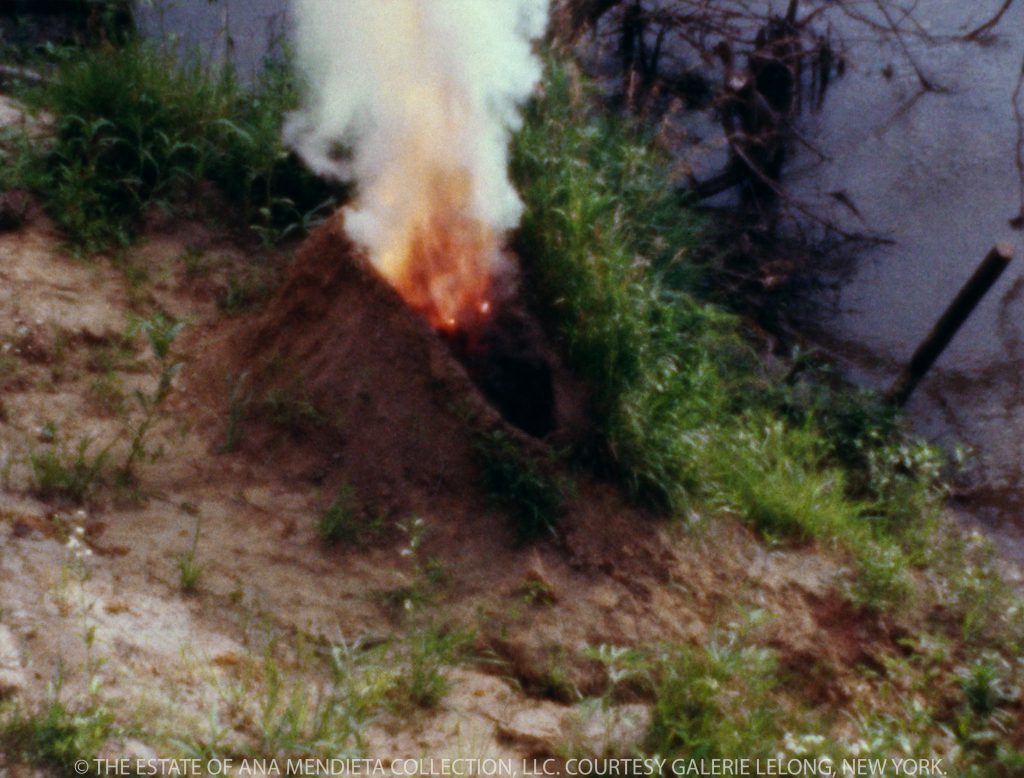 In Iowa, Mendieta attended art school and began her cross-disciplinary work while studying with German artist Hans Breder. She was already experimenting with photography and film, documenting performances that explored her body, nature, sex, and femaleness when she began visiting Mexico in 1971. She felt Mexico was like going to back to the source, a magic landscape where performance, sculpture, nature, and place could be combined. Her performances are a unique blend of Cuban Santería, Catholicism, Mexico’s ancient ruins and landscape, and the post-traumatic stress from living in exile, which make her work both ritualistic and visceral. Some of her early performances and films were created in response to the 1973 rape and murder of an Iowa university student, Sara Ann Otten. Her film Sweating Blood (1973) and Moffit Building Piece, Iowa City, Iowa (1973) referred to this murder. Her films are shot in a straightforward documentary style but are also very intimate. Almost everything she did was documented on film or in photographs. 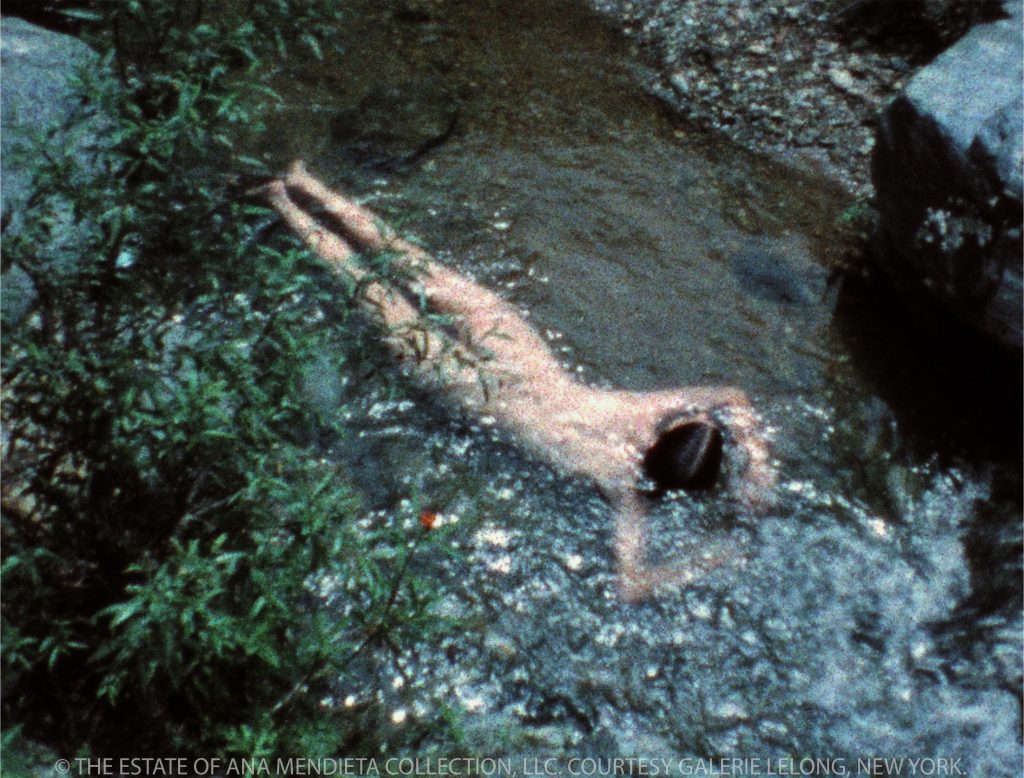 By 1974, Mendieta was working on a series of performances that used cow blood as the primary material, where she dips her hands and forearms in blood then smears them down a wall or on her body. Included in the Berkeley show are the films Silhueta Del Laberinto (Labyrinth Blood Imprint) (1974), where she left a bloody imprint of her body next to the ancient site of Yágul, Oaxaca. Her films Blood Writing Iowa and Blood Sign, Iowa (both 1974) have the words “She Got Love” and “The Devil is Inside Me” circumscribed by the outline of her body, painted with blood. In her film Blood Inside Out, Old Man’s Creek, Sharon Center Iowa (1975) she slowly covers her body in blood.
In Sweating Blood, Mendieta starts bleeding from her brow line which drips into her eyes. With no clear signs of actual wounds, the blood acts like an invisible stigmata. The imagery reminds me of artist Frida Kahlo’s self-portraits. Kahlo’s paintings recount the pain of an accident in her youth where she was impaled by a steel pole, which later led to her wearing a back brace, numerous operations, as well as several miscarriages. While a Marxist, she was deeply influenced by Mexican devotional folk paintings, which use Catholic iconography called retablos, and by her connection to Pre-Hispanic goddesses, identifying her female body with the fecundity of the earth. I think Mendieta’s Cuban roots, biculturalism, and strong relationship to nature, made her feel genuinely connected to Frida Kahlo. She once attended a costume party for Louise Bourgeois in New York city dressed as Kahlo.[2]

After arriving in New York in 1978, Mendieta joined the influential feminist collective A.I.R. Gallery (Artists in Residence, Inc.). A.I.R was established in 1972 as the first women-centric, artist-directed, non-profit gallery in the United States. “We didn’t have a unifying agenda or way of thinking,” says (Dottie) Attie, a founding member (of A.I.R.) “except that we wanted everything that men had in the art world. For most of us, that meant recognition.”[3] 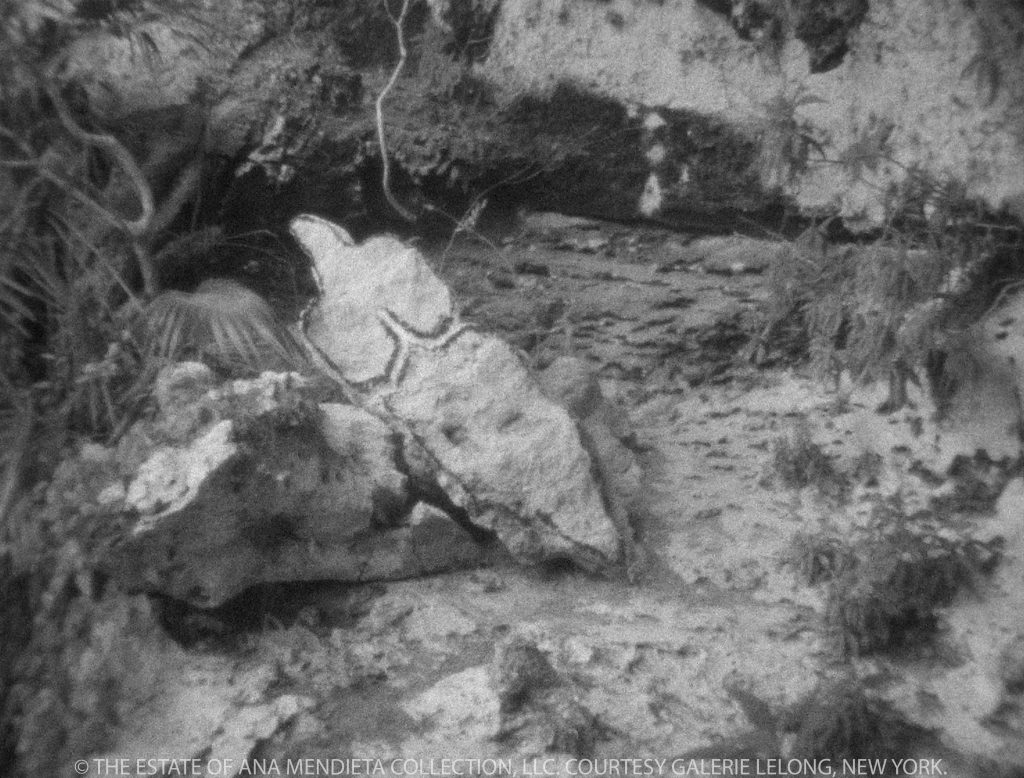 In 1981 she returned to Cuba, to create the last three films in the exhibit, Esculpturas Rupestres(1981), Untitled (1981), and Ochún, Key Biscayne (1981). Her installations and video documentation of traced female forms in the sand of Guanabo beach in Cuba, and her carved fertility figures into the limestone caves and cliffs of Cuevas de Jaruco, in Havana, touch upon her connection to the ancient goddess myths of the caves and the island. Ochún was made off the coast of Florida, the silhouette points to Cuba, while the tropical waters undulate around the sandy earthwork. Later that year she showed these Cuban works in the A.I.R. Gallery in New York. 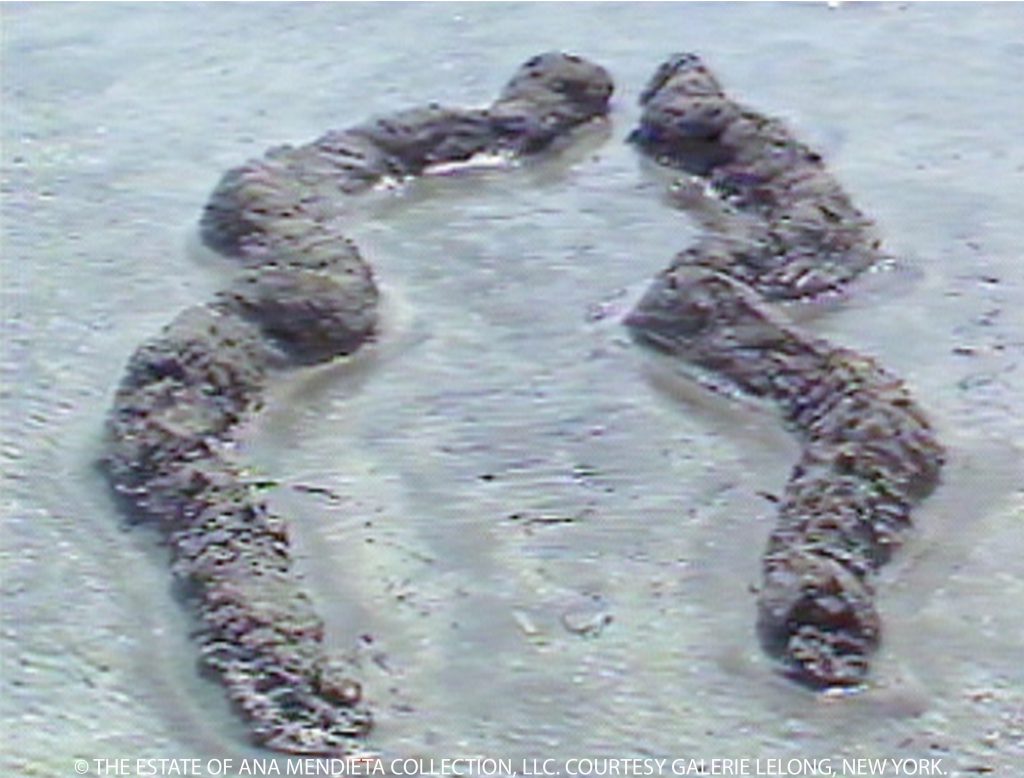 When she left A.I.R. Gallery in 1982, Mendieta’s interest shifted to creating lasting objects that could be sold. Her work focused on the topics of identity politics and postmodernism that were popular in the mid-1980s. The beauty of the earlier intermedia projects, which includes many of these 21 films, was their focus on process and intimacy. The vulnerability found in the ephemeral nature of some of her earlier work created a quality of displacement, longing, and humanity, which, for me, transcend identity politics.

Covered in Time and History: The Films of Ana Mendieta is organized by the Katherine E. Nash Gallery at the University of Minnesota and coordinated at BAMPFA by Apsara DiQuinzio, curator of modern and contemporary art and Phyllis C. Wattis MATRIX Curator..

Next post Jibade-Khalil Huffman: In Conversation With Nicole Kaack