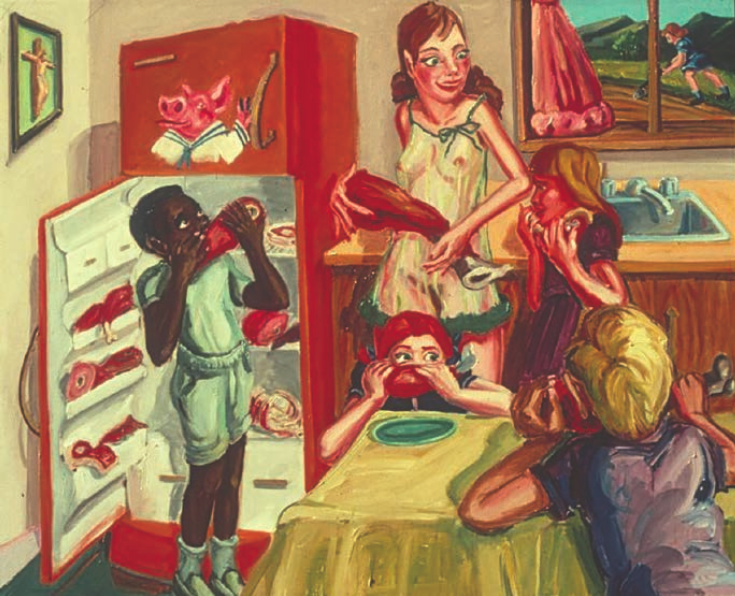 The past year brought many sad passings to the northern California art scene, but one that has received scant remark was that of James Albertson, whose battle with cardiovascular disease ended last July in Sacramento. He was 73 years old. Like many artists of his generation, he exhibited regularly to favorable reviews, and he received two NEA fellowships back in the years when such things were given to individual artists—25 years ago. It’s fair to say that he had a following, but much of it was on the East Coast, where collectors are more adventurous and risk is less frowned upon. In an all-too-familiar story for Bay Area artists, we can say that he was respected by other artists, but shunned by the wine-and-cheese clans that make up the Northern California patronage class and much of the local curatorial class as well. There were a few exceptions: John Fitzgibbon and Susan Landauer did do their part to place Albertson’s work in the public eye, in group exhibitions at the Crocker Art Museum (2003) and The San Jose Museum of Art (2000) respectively. He also exhibited several times at the Joseph Chowning Gallery, which operated in an out-of-the way location on 17th Street until it closed in 2007. Chowning being the eccentric San Francisco dealer who, as Fitzgibbon once said, “couldn’t sell keys in a jail.”1

On the East Coast, Albertson had the support of the late Marcia Tucker, who included Albertson’s work in her infamous “Bad” Painting exhibition at the New Museum in early 1978. At that post-minimalist and post-conceptualist moment, “Bad” Painting was a truly transgressive exhibition held at a time when real artistic transgression was possible—not yet the well-worn and possibly worn-out career option routinely still taught in graduate schools. In fact, we can now judge “Bad” Painting as a very worthy forerunner of Paul Schimmel’s Helter Skelter exhibition held at MOCA in 1992, itself anticipating the Pop Surrealism exhibition that was held at the Aldrich Museum of Contemporary Art in Ridgefield, Connecticut in 1998. Soon after that, clone fatigue began to set in and then proliferate, leading to an avalanche of copycat exhibitions sporting indicative names like Beautiful Losers, Bad is What I Do Good, and The Whitney Biennial.

And insofar as the artists included in the “Bad” Painting exhibition was concerned, Albertson was the baddest of the bad, especially if the term could be understood in its more contemporary sense of being “badass,” “vulgar,” or “unapologetically naughty.” Viewed from another perspective, we could also say that his paintings were actually stunningly good in terms of technique and execution, but only “bad” in relation to his lascivious subject matter that, at the time, must have looked exceedingly and willfully tasteless. But times were already changing, and Albertson and his ilk were early bellwethers of those changes. The art world of the late 1970s had grown blatherously placid after the fevers of the 1960s and early 1970s, partly owing to the fact that funding for the National Endowment for the Arts and other government arts agencies were at their zenith by virtue of longstanding bi-partisan Congressional support.

Meanwhile, New York itself was a disaster area of crumbling infrastructure and social unrest, meaning that “the arts” were being circumstantially recast as visions of entitled social denial. The tide of political reaction that propelled Ronald Reagan into the White House was only beginning to form in California, and was heralded by the launch of the campaign to pass Proposition 13, in what turned out to be a landslide election eight months after the end of “Bad” Painting’s run. I bring this up because those changes seem in many ways to foreshadow those of our own time, both within and beyond the art world. Whether it be the age of Reagan or the age of Trump, it looked and still looks very much like the age of fear, and then, just as now, the art world lived in a state of business-as-usual denial, perched on a shaky precipice of manufactured relevance. 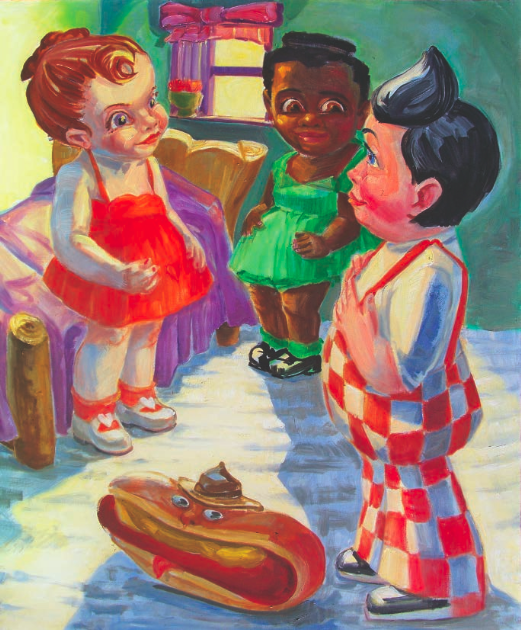 For several years prior to the opening of “Bad” Painting, “fresh” was the term for the kind of art that suborned attention in the age of polite post-minimalist orthodoxy. But by the end of 1977, good ol’ fresh was well on its way to becoming the new stale, discredited as a frivolous cherry set atop cultural pretenses that had become an otiose creampuff of smug non-confrontational hypocrisy. A new spirit of cultural contest was in the air, imported into the New York art world from that sweet land of funk called San Francisco, and from the monster-roster of imagist artists hailing from Chicago.2 It is worth noting that Albertson had first hand familiarity with both traditions, having earned his BFA degree at the Chicago Art Institute in 1966 and his MFA degree at what was then called the California College of Arts and Crafts in 1968.

Oddly, Norman Mailer was among the first to grumble the kind of misgivings about the value of elite cultural institutions that would tee-up the onrushing shift in attitude that would knock the upper-case C off of the word culture. In 1974, he published a picture book called The Faith of Graffiti, which included stunning photographs of even more stunning street art anonymously executed in and around a New York City that seemed to be going to hell in a John Lindsay/Abraham Beame/Ed Koch handbasket. These images suggested that, at the street level, a combative vitality was in the air, even if it was absent from the galleries and other art spaces of the time. But soon after “Bad” Painting paved the way, Jean-Michel Basquiat and Keith Haring surfaced from the subterranean shadows, and street art was the new gallery art, heralding the moment when the anthropological notion of culture with a chaotic lower case “c” started to look more interesting that the institutionally sanctified upper-case version. (We would do well to remember that, at that time, no one in North America was paying much attention to what was going on in Europe, where expressive figuration was already on the rise in Germany and Italy.) Albertson’s artist statement from the “Bad” Painting catalog spoke volumes about his position on and within the exhibition:

“I believe that the particular forms that art takes are the products of individual sensibilities in various times and places. I do not believe that art progresses, only that it changes. Consequently, I do not concern myself with any ideas about what I should be doing, but only with making something that will excite me and give me pleasure . . . One way that I do this is through purposeful ambiguity, [and] references to things that people care about (sex, death, religion) . . . I try to make art that colors existence instead of being an overly familiar and redundant backdrop to it.”3

A good example of Albertson’s work from this period is Sex, Violence, Religion + the Good Life (1976), which was given pride of place in the installation of “Bad” Painting. Executed in a lustrous palate of garish oil colors, it shows a woman wearing a transparent negligee serving up large hunks of meat to a crazed brood of multi-racial toddlers. There is a grotesque pig-face affixed to the nearby refrigerator, while a crucifix adorns the adjacent wall. As Albertson’s work evolved through the 1980s, he focused on doing wicked send-ups of art history. These usually took the form of modestly scaled oil paintings that revisited the conventions of mannerist and Baroque picture composition, but adding a calculated infantilism. I mean this literally: he reversed the roles played by adult and child figures, so that the tiny angels and putti that normally adorned the compositions of painters such as Pontormo and Rubens were given adult proportions, while the figures of saints and madonnas were rendered as obstreperous infants. Albertson was deeply knowledgeable about European art history and the painters that figured in it, and that knowledge guided him to exaggerate his own oil painting technique far into the realm of libidinous play. Even though there was nothing pious about his work, he was able to “self-consciously render the contradictions between surface and depth” to achieve a kind of “madness of vision” based on creating “palimpsests of the unseeable,” to borrow three sentence fragments from Christine Buci-Glucksmann’s 1986 book La Folie Du Voir.

We should also remember that Albertson was quite a collector. When I first came to know him during the early 1980s, I was impressed by his stupendous collection of plastic ray guns of vintage provenance. When he moved to the Sacramento area in 2006, I lost touch with him but I did know that he was doing some teaching at Sierra College and American River College, as well as the California Department of Corrections. I have been informed by his friend Irving Marcus that, in recent years, he had amassed an impressive collection of African sculpture, about which he had developed a scholarly passion. James Albertson was an interesting guy and an interesting artist, and I hope that someone will organize the memorial exhibition that his work continues to deserve. So far, I have heard nothing about any such plan, and it saddens me to think that this column alone might have to suffice as a public celebration of his notable career. Chalk this “sadness” up to one of the more demoralizing aspects of the brave new art world of the past decade, shaped by money and a giddy enthusiasm for erasing history to make the fiction of nowness somehow more believable.

1) Quoted from Fitzgibbon’s eulogy for Eduardo Carillo, U.C. Santa Cruz, September 28, 1997.
2) At that time, funk was the reigning style of art in Northern California, owing to the prominence given to it by an exhibition of the same name curated by Peter Selz at the University Art Museum in Berkeley in 1967. The so-called “monster school” of Chicago artists pursued a kind of grotesque figuration that drew upon Midwestern folk art traditions. What united both groups was their strident antipathy to minimalism, which they thought to be equally drenched in arrogant pretense and soulessness.
3) See Marcia Tucker, “Bad” Painting (New York, New Museum, 1978). 2-3.