A modest work on paper hangs in the gallery entryway, slashed through by a light gray ribbon that catches four parallel stripes, dyed blotchy pinks and desert sunsets. These narrow shapes of silver and red are overlaid by rectangular forms: three obsidian dark and two watermarked by dune-shaded pigment. Subtle consonances of position and scale indicate that this Lissitzky-esque watercolor is a design plan, detailing the layout of Andrea Zittel’s living room in Joshua Tree, a topography now doubled and tripled within the cavernous confines of Andrea Rosen’s gallery in New York.

The paired constructions of Planar Configuration #1 (all works 2016) beg caution as visitors trip their steps around these monoliths. Mondrian-esque paintings cut in space, these works fix ambiguous recessions and projections of color in a sculptural design that changes with every perspective. The sculptures’ subtle inclines mirror the gradual shifts of a monochromatic California landscape excerpted on the perpendicular planes of the room’s southwest corner. However, the parallels to nature drawn in the extended horizontals of metal beams, wooden plateaus, and steep fiberglass cliffs are interrupted by the unnatural rigidity of precisely straight lines and level surfaces. Amongst the varnishes and powder coatings, familiar patterns once again emerge: a thigh-high counter suggests the dimensions of a kitchen island; a low platform might easily be used as a twin-sized bed. 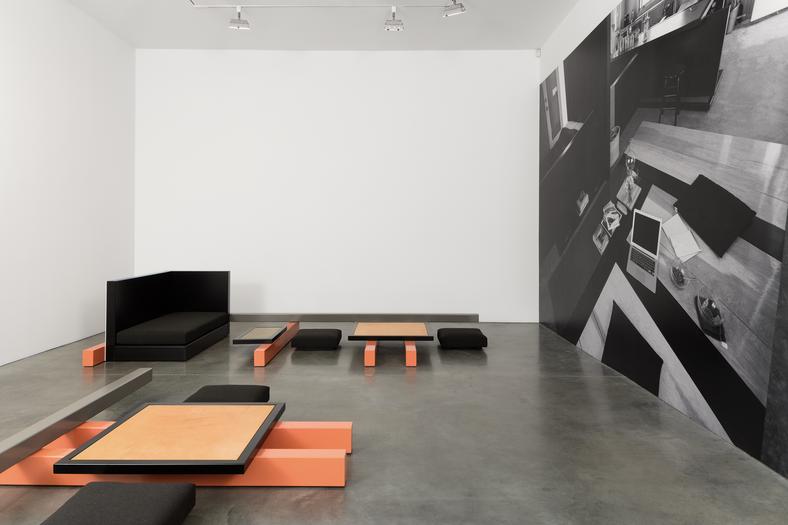 Toeing the line between modern expression and interior design, Zittel riffs on the dimensional possibility of Minimalist sculpture and the infinite customizability of contemporary consumer culture. The iterative potential of these works is expressed in the watercolor designs, plan-like carpet panels, and catalogue-worthy snapshots that accent gallery walls.

In spite of the allusion to Minimalism and De Stijl written implicitly in forms and explicitly in titles, the formal richness of compositional sympathies is not quite the point. Interlacing form and function, for more than 20 years, Andrea Zittel’s creations have found equal homes in museum galleries, Brooklyn storefronts, Danish Seas, and desert valleys. Works such as Linear Sequence #1 and Planar Configuration #1 have been the elegant conduits through which Zittel has expressed her reflections on the individual’s place in an increasingly domineering culture. We have entered the era of the track home, the apartment complex. American developer-dreamers like Eli Broad have marked our landscapes with acres of identical houses stretching into the distance. Zittel suggests that it is to such homogeneity and mass-production that our individualist impulse responds, a ‘we are what we consume’ mentality that sells us ourselves alongside our Ostron flatware and Jätteviktig candle holders. 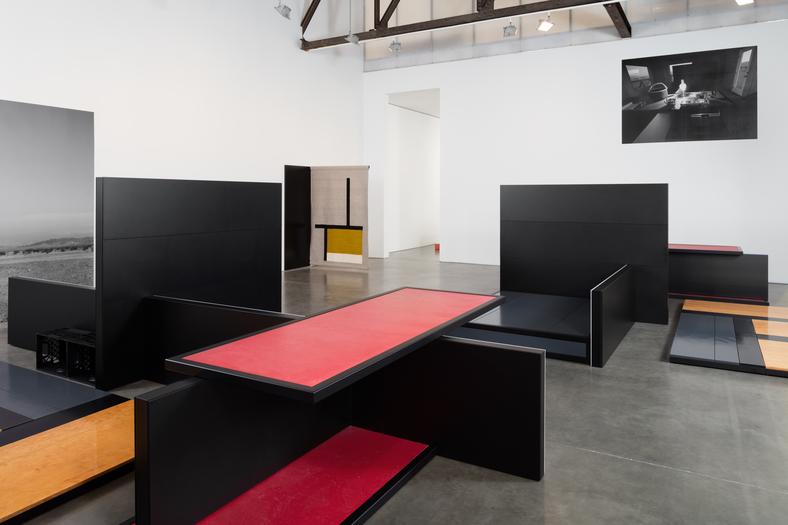 Although Zittel has long functioned under the moniker “A-Z Administrative Services,” she has been careful to make the “distinction between a personal statement or vision and a product line.”[1] Functional artworks ranging from uniforms and chamberpots to office furniture and trailers are not intended as an alternative brand but as an offer of self-sufficiency or, at the very least, declarations of distinction. Zittel’s living works are peppered with upsets to expectation: the divider that trips you up, the counter that reaches halfway up your thigh not your belly. Interrupting routines, Zittel demonstrates the comfortable tendencies encased in our way of life, but disrupts them just enough to make a viewer wonder at ”the way we want the world to exist.”[2]

Zittel questions the null case assumptions of our domestic spaces, using the gallery to isolate the assumed architectures within which we operate. What is the function of furniture lowered almost to the level of the ground? What is the solace of a rug that bears the traces of a floor plan, but waves in empty air? Furniture, if not made in direct response to corporeal comfort, is rendered to the allocation of space to a particular purpose. In our facility to divine function in colored rectangles, Zittel hopes to demonstrate a cultural indoctrination, an understanding of space that has existed since the Roman domus —complete with tablinum, cubiculum, and triclinium—and lives on in our own offices, bedrooms, and dining areas. The artist’s curiosity about the spatial delineations observes the arbitrary in what appears purposeful, expressing misgivings that we share in the realtor’s hopeful advertisement of an empty cube—as sterile as any gallery—as a future living room. 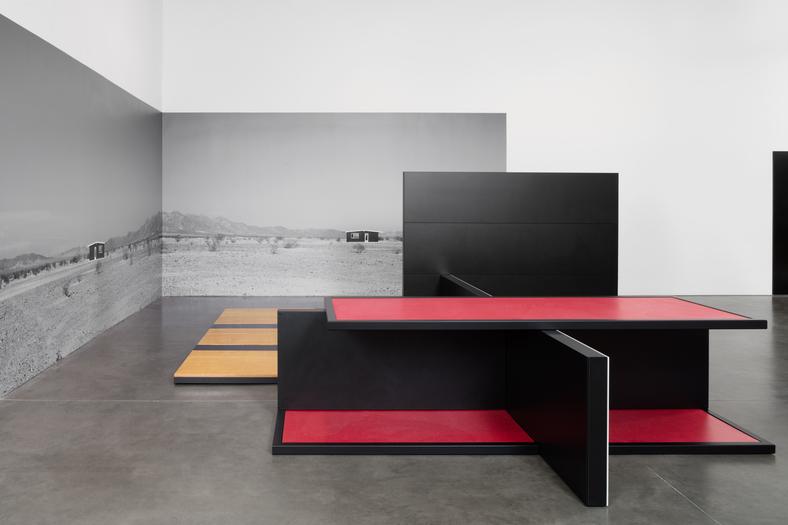 Next post Tom Sachs: In Conversation With Dakin Hart