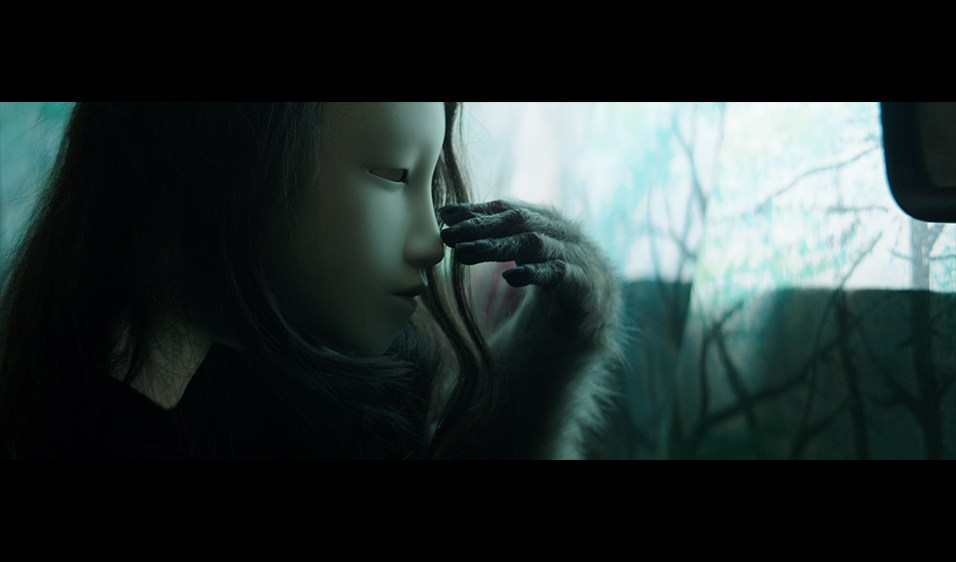 Let’s start by stating the obvious: international biennial exhibitions have been looking the same for quite a few years now. These exhibitions feature many of the same artists, and sometimes even the same works by those artists, set in predictably algebraic arrangements buttressed by pretentiously vague thematic purposes that are further supported by notably conservative systems of inclusions, subcategorized in terms of media, gender identity, and country of origin, all loudly paying lip service to a narrow, predictable idea of difference. It may not matter that, in recent years, the international shortlist of artistic directors for these mega-exhibitions seems to be opening up; the higher levels of curatorial prestige have created a protégé system where new voices sing the same old songs. In other words, there is now no obvious path leading from the organization of smaller biennials to larger ones, with the once-every-five-years staging of Documenta as the brightest star in the mega-exhibition heavens. Of that, more will be written next June, but for now, the focus is on Asia, with three biennials taking place in Korea and a fourth in Taiwan, with still another opening in Shanghai in November. The list goes on: the Chengdu Biennale, the Beijing International Art Biennale, the Singapore Biennale, the Yokohama Triennial, the Nanjing Triennial, Guangzhou Triennial, and the Kochi-Muziris Biennale (all established in the past 15 years) have all made a splash recently, although not all of them are being staged during the current fall season.

It’s time to question the merits of these exercises in curatorial gigantism, especially now that so many of these extravaganzas take a cue from 2002’s Documenta11 and expand their operations into multiple venues (or “platforms” as they are now called), into different cities, or even onto different continents. Supposedly, more is better, but that more increasingly seems to appear in the form of bigger budgets, more venues, more square footage of exhibition space, and more curatorial assistants. But something different happened in Korea during the past few months; two smaller biennials, Mediacity Seoul and the Busan Biennale, proved to be more interesting alternatives to the larger Gwangju Biennale and Taipei Biennial, owing to the fact that the clarity of curatorial focus succeeded where sheer proliferation failed. I am going to go out on a limb and say that, for several reasons, this might be a sign that the hyper-additive model of international exhibition development may be passing. Pressingly, the mania for sheer proliferation is revealed as a side-stepping of the kind of criticality that now seems to be even more necessary than it was prior to the past two decades of biennial fever. If everything is important, then nothing is, and we would do well to remember that not too long ago, such exhibitions were the places where contemporary artworks first auditioned for their places in art history. Now, in our post-historical moment, they are events that guarantee large audiences and “museum worthiness,” adding a threadbare smidgen of importance to the resumes of the included artists and curators.

Of course, next summer’s trifecta of Documenta14, the 57th Venice Biennale, and the Münster Sculpture Project could prove me wrong, but in the meantime, we might want to consider another, more situational counter-argument. It has to do with the way that museum culture operates outside of the European and North American contexts with which most of us are familiar. Since the explosion of tiger economy prosperity in the mid-1990s, the Korean strategy organized large shows and energetically promoted exhibitions that would put the work of Korean artists in proximity to well-known American and Europeans, giving international importance-by-association to not only their artists but also to their local art history. For the most part, this has served the Korean art scene well, creating a great deal of collector interest, and expanding professional opportunities for the artists and curators, although in the case of Gwangju and Taipei, the artistic directors have tended to be well-known European curators passing out mediagenic helpings of cultural paternalism. But in the case of Mediacity Seoul and the Busan Biennale, the emphasis has been on the projects of Korean curators working in closer proximity to the Asian art scene, staging projects more closely bound to the recent history of Asian art. Although these exhibitions were about half the size of the more prominent and time-honored Gwangju Biennial, they were far better, showing that intelligently focused curation can do things that big budget spectacles cannot, like avoiding the trivializing of the art contained within them.

SeMA Biennale Mediacity Seoul took place from September 1st to November 20th under the direction of Beck Jee-sook, under the title NERIRI KIRURU HARARA, a sequence of Japanese words that point to speculative possibilities taking place in an imaginary future, giving the overall exhibition a science fiction feel (and calling attention to the fact that all contemporary art is an becoming an exercise in science fiction). In some cases, the presented work was not at all futuristic. I was impressed by a three-screen video projection by Cha Jae-min titled Twelve (2016), with each screen showing four characters who were engaged in an absurd “negotiation” about raising the minimum wage. The four figures on the left screen were caricatures of businesspeople whose concern was to suppress the cost of labor, while those at stage right were making rational arguments about the larger benefit of an increased minimum wage. The four located in the middle screen played the part of the impartial judges of the debate, but in many subtle ways (gesture, costume, etc.) they made it clear that their prejudicial sympathies lied with the business operators. I was also intrigued by the suite of small, very crafty airbrush paintings by Oliver Laric titled Missile Variations (2010), depicting sequential scenes of outbound missiles being launched just prior to another cluster of inbound missiles, sounding a resonating theme in contemporary Korea. As might be expected, Pierre Huyghe contributed the showstopper, Untitled (Human Mask) (2014), a dreamy, high-density video projection that followed a chimp as it ambled around a darkened room. The fact that said chimp was wearing a butoh mask and long flowing robes made its perambulations more than just a little bit creepy in a Planet-Of-The-Apes-meets-Waiting-For-Godot way. 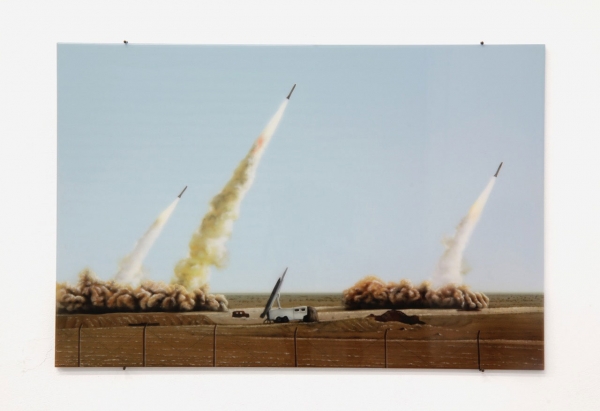 The Busan Biennale, on view until November 30th, was organized by Yun Cheagab (Director of the How Art Museum in Wenzhou), and was given the title Hybridizing Earth, Discussing Multitude, containing the work of 123 artists and collectives, smartly divided into three sections, called Projects. Project 3 was a series of lectures and other events that took place prior to and during the run of the exhibition. Project 1 was titled an/other avant garde: china/ japan/korea and was a stunning historical exhibition that focused on three key episodes in the post-World War II emergence of avant-garde art movements in those countries. The China portion of Project 1 was titled Briefings: Avant-garde Art in China 1976-1995, and curated by Guo Xiaoyan, focuses on a period of artistic turmoil prior to the giant market boom for Chinese art, as seen in the work of such artists as Gu Wenda, who is represented by eight early paintings collectively titled Drama of Two Cultural Formats Merge (1987) and Xu Bing, who shows photographs and video documentation of two fornicating tattooed pigs in A Case Study of Transference (1993-94). It is worth noting that the pig on the receiving end of this performance was tattooed in Cantonese script, while the one doing most of the performing was tattooed in an Anglo-European alphabet. 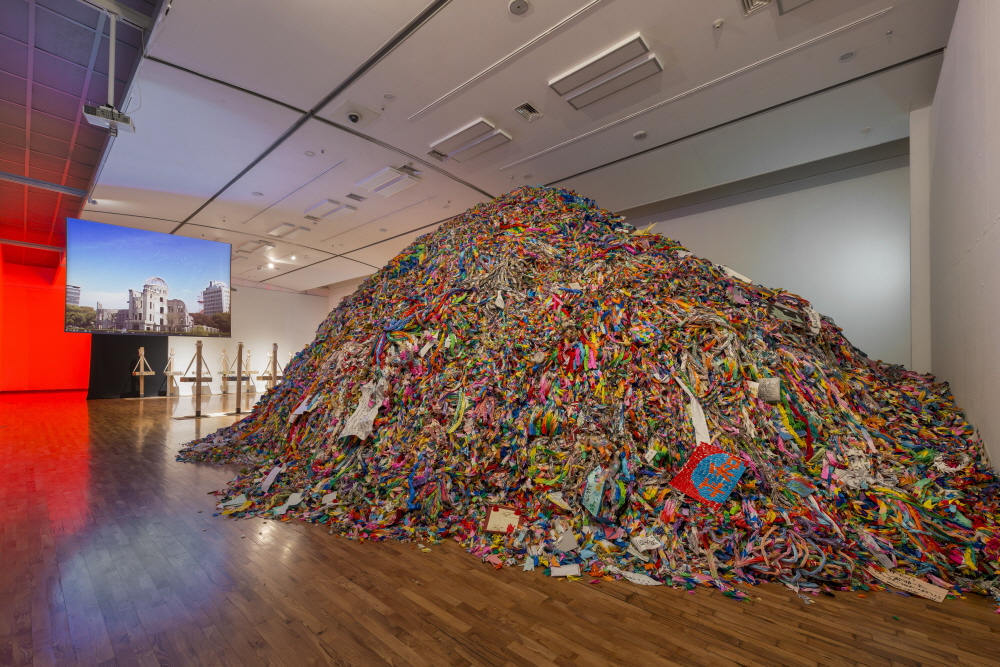 The Japan section, curated by a team including Noi Sawaragi, Akira Tatehata, and Yuzo Ueda, was titled Avant-Garde Art in Japan After War, and took a close look at the post-1950 period. It features early work from several of the well-known Gutai artists, as well as other artists who made the Tokyo Olympic Games of 1964, the 1970 Osaka International Fair, and the Japanese Constitution subjects of quizzical works that tried to navigate the post-Hiroshima spiral of contested identities. Japanese art critics now call this period Blazing Flower (as indicated by recent exhibition at the Kyoto Museum of Modern Art), and one of the things that becomes clear is the extent to which the work of this era influenced the development of avant-garde art in the rest of non-communist Asia. Noi comes to his organizational position as an art critic rather than as an institutional curator, and I would suggest that contemporary Asian art would benefit from more voices like his, if only to counter the authority that is (over) invested in institutional patronage systems connected to government initiatives.”

The Korean section was curated by Kim Chandong, and was titled Korea’s Avant-Garde Moment: A Rebellious Escape. It looked at the period running from the late-1960s to the late-1980s when two very different movements came to the fore: the Dansaekhwa group and the minjung misul. Dansaekhwa literally translates to “monochrome,” but what this leaves out is the implied sense of performed immediacy that comes with the presentation of minimally inflected surfaces, such as is found in Kim Dong-Kyu’s trio of very early monochrome paintings, or Park Suk-Won’s Four Shadows (1972), which is made of shapes cast by the shadows of four toppled blocks of wood. Minjung misul (i.e. “the people’s art” was most forcefully represented by an anonymously authored 1967 film documenting the subversive activities of the Korean Young Artists Association.) Project 2 inaugurates an additional venue for the Busan Biennale, the cavernous repurposed cable factory of Kiswire’s Suyeong building. It houses the contemporary section of Hybridizing Earth, Reflecting Multitudes and contains works from about 40 artists and collectives from all points of the globe. One of the works that stood out for me was a 2016 piece titled Handmade Fantasy by Yun Pilnam, which reminded me of Eva Hesse’s final Untitled (Rope Piece) from 1970, until you came close enough to see that is was comprised of tens of dozens of cell phones and power strips rendered as Oldenberg-esque soft sculpture. I also liked the dual-screen animated video by Choi Sung Rok , which turned the tensions between North and South Korea into a comical ant farm saga of bellicose rinse, dry, and repeat. Choi’s piece resonances for multiple reasons, but after seeing four biennales in the space of a long week, its most salient meaning for me lied in the way that it summarized the normative exercise of curatorial imagination in today’s global art world. 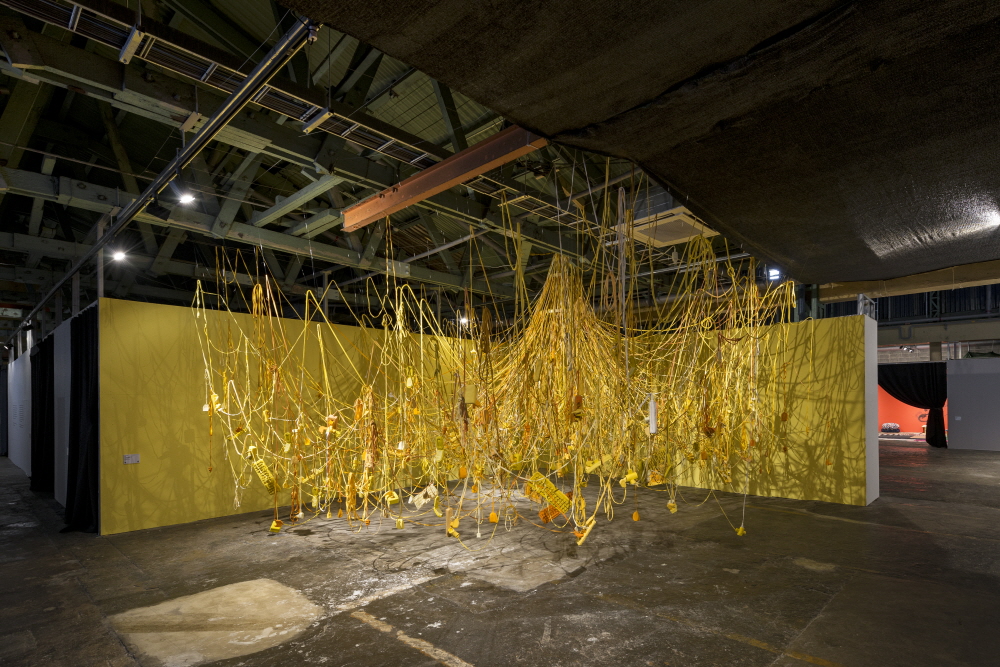 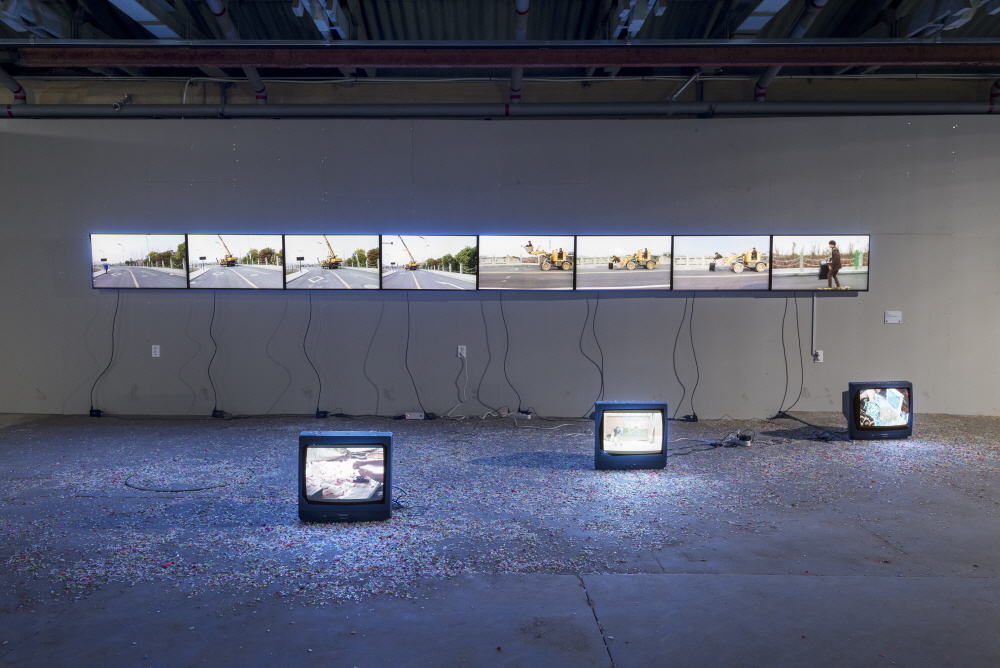 The research for this article was supported by the Faculty Development Fund of the San Francisco Art Institute.

Next post HOOF & FOOT: a field study, Chris Sollars at the Manetti Shrem Museum of Art at the University of California, Davis 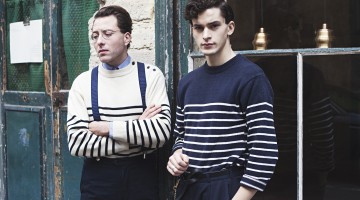 Reporting on La Horla in Paris: Part One