MOUSSE Publishing  just posted a great article about Jan Peter Hammer’s new show, The Fable of the Bees, at Supportico Lopez in Berlin. 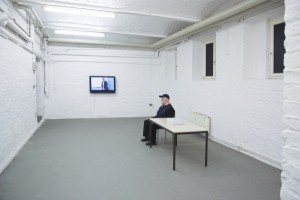 The show title references Bernard Mandeville’s 1705 poem, The Fable of the Bees: or, Private Vices, Public Benefits. Mandeville’s extreme theory, and all that it has come to mean, is dissected in Hammer’s show who appropriates it for contemporary society through YouTube-like video documentaries and a lone security guard watching over his days wages.  Mandeville argued that “better people make the world a worse place, since so-called vices such as egoism or greed stimulate social prosperity, whilst altruism and honesty result in collective atavism and disinvestment“.  Clearly, the reception of his work was ill received and then eventually adapted by the British Utilitarian School who disguised Mandeville’s words into a more acceptable version, fable, or moral lesson to be learnt that embraced politics and morality. Since then Mandeville’s theory has been broken down even more, some could even say reverted, back to it’s original stance.  Politics turns it’s back on it’s ethical roots – and there is no better time in history or political climate than our own to use as proof.  More specifically Hammer’s show points out the obvious, those that “move” society “forward” are the ones that hide from the truth, politics is inevitably linked to economics and will forever hide from ethics, and those that try to say otherwise slow down our progression. Mandeville made a valid point, although probably not one to live by, and Hammer continues to push it’s boundaries.

Hammer’s piece, That Which is Seen and That Which is Unseen, brings this into question. A hired security guard sits in the middle of the gallery watching over a pile of money.  The money are his wages for the day. Both exist for the other, essentially cancelling each other out; capital earned vs. labor provided.  Hum.

Next post Assed Out in the Mini Dramas @ Queen's Nails Projects