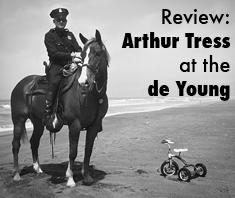 Budding photographer Arthur Tress, fresh from art school studying as a painter, was 23 when he came to San Francisco in 1964, up from San Miguel de Allende to visit and stay with his sister Madeleine, a social activist in partnership with a woman. His four-month residence came at a precipitous time, San Francisco hosting the Republican National Convention, which nominated Barry Goldwater, and the Beatle’s first concert at the Cow Palace. Not only was it a period of maturation for Tress, but for the country…the Convention and Cow Palace appearances highlighting the coming divide in the country, which some say continues. You have striking workers, racial awareness, Conservative delegates, Beatle fandom, all converging in San Francisco 1964, fresh from the sting of the Kennedy assassination. Without a car, Tress walked the streets of The City, focusing on the anthropological peculiar likened to Diane Arbus. Sympathy with his sister’s somewhat outsider status may have added to this. It’s a time capsule only recently unearthed after long time San Francisco resident Madeleine, who stored the contact sheets, died. While only a few of the vintage prints are on display – the first time since they were exhibited in a Sausalito bookstore in 1964, a new set of works have been expertly printed and made fresh all over again, currently on display and to remain in the Museum’s Achenbach Foundation collection. A particularly noteworthy and deserved acquisition and exhibition.

The subject matter of Arthur Tress: San Francisco 1964 breaks down into three broad categories: public gatherings, including civil rights and political rallies; portrait studies of San Franciscans; and views of shop windows, commercial signs and architectural fragments. Often these categories overlap. In photographing events such as the Auto Row demonstrations, Tress was interested in recording passive bystanders, as well as active participants. His candid images of spectators lining the streets of San Francisco, whether isolated or in groups, capture the distinctive fashions, expressions and body language of the era. The frequent incursions of commercial logos and signage add to the contemporary flavor of the photographs, effectively fixing time and place.

The exhibition captures the flavor of San Francisco without featuring its most familiar monuments. Tress’s approach to the city was idiosyncratic, generally avoiding popular tourist sites such as the Golden Gate Bridge and Chinatown, while favoring mundane locales like laundromats and coffee shops. Ganz observes, “Tress is a photographer of people rather than landmarks. Given the option of pointing his lens at an attraction like Coit Tower or at a tourist observing the monument, he will always favor the human element over the architectural setting.”`

Born in 1940, Arthur Tress was raised in Brooklyn and started experimenting with photography in his teens. After graduating from Bard College in 1962, Tress traveled internationally for four years as an ethnographic and documentary photographer. It was during this international tour that he spent the summer of 1964 in San Francisco focusing his lens on city life. Tress developed his San Francisco negatives in a communal darkroom in the Castro District and mounted two small exhibitions in North Bay galleries that summer. He went on to pursue a long and accomplished career in photography that continues to this day.