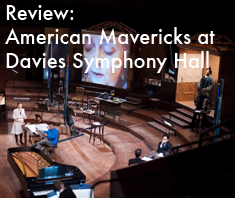 By mavericks we are referring to composers, who for one reason or another broke away from classical music standards to tread a path away from the mainstream. Henry Cowell distinguished himself by his “tone clusters.” Charles Ruggles was a prime example of Yankee individualism, constantly refining a limited repertoire. Lukas Foss, the youngest maverick, composed “Phorion,” in two versions, one with a fixed score and the other incorporating chance elements. On this occasion, the fixed score was performed.

The works by Cowell, Ruggles and Foss were played with full orchestra. As a visual artist with limited musical background, it just seemed more of the same. A bit ruckus here, and bit discordant (whatever that is) there. The composer scores for orchestra, the conductor interprets it, the musicians play it. They go to the next venue and replicate the performance.

Cage is a different case. He supersedes mere musical innovation and proved it this evening. Talk about maverick – he got conductor Michael Tilson Thomas to juice a carrot in a blender behind the vocalizations of Meredith Monk, Joan La Barbara and Jessye Norman. It was a happening by the establishment some sixty years after Cage, Cunningham, Rauschenberg, Tudor et al. performed at Black Mountain College to timed sequences irrespective of each others activities.

Still, it needed a bit of audience preparation beforehand. So, there was a two-hour warm up before the performance by instructors from the Walden School. They got the audience going in a participatory back and forth (this side claps, this side moans-let’s see what it sounds like together) – getting us in the mood for the spontaneity to follow.

You could see why painters were John Cage’s main audience in the early days. It was so visual. Especially in comparison to the other works, which featured the orchestra dressed in black and white wedded to their chairs. Indeed some had special chairs that you could crank to get the proper posture. Besides the actual playing of instruments and the flamboyance of the conductor, that was about as action packed as it got.

(The one exception to this was pianist Jeremy Denk, who entered in a black t-shirt and rocked the house riffing Cowell.)

Cage’s work on the other hand, called for skilled musicians who were given a score, often derived from chance, with latitude within the score allowing for personal choice. Personal choice. Maybe that’s what being a maverick entails. Cage not only chose the path, he paved the way for others to follow. No repetitive rote. No fallback style. Creating within the moment. That’s why painters understood him.

What made the evening especially memorable (besides Michael Tilson Thomas playing the blender), were the vocalizations of Joan La Barbara, Meredith Monk and Jessye Norman. Each could hold their own in any situation, but together it was an avant-garde musical supergroup. Norman sang while typing. La Barbara slipped in and out of digital projection. Flags flew and waved in the breeze (well, the wind machine). The cellist bounced a basketball. Players came and went according to an event score that allowed them freedom of movement.

Cowell, Ruggles and Foss are equally admirable in their intent to stretch the boundaries of classical music, each making a significant contribution. I applaud any artist who creates over a lifetime. Who sticks to his or her principles despite the popular currents of the time.

Cage is just in a different league. While the other three tweaked musical convention, Cage was exploring areas well outside of musical composition – Zen, the relationship between dance and music, event scoring, task orientated art…silence. All this translated to the visual arts as well as aural and somatic arts.

His was a breakthrough generously shared with others, including happenings creator Allan Kaprow, and artists such as Dick Higgins and George Brecht, who shortly after taking Cage’s New School for Social Research class on experimental composition, helped form Fluxus.

Applying Cage’s techniques of experimental composition were just as useful to visual artists as to musical composers. They didn’t need an education in music to appreciate it. It was something universal he tapped into. Just as his friend Marcel Duchamp had earlier in the century championed the readymade, thereby questioning the hand of the artist, opening myriad avenues of creativity beyond painting and sculpture for decades to follow, so too has Cage’s research been parlayed into a continuing fascination, mostly associated with chance and silence, and the independent intermingling of the arts.

Another reviewer of the same performance called Cage’s work tired and boring. Most music reviewers do. They credit him as an inventor and hate his music. Just going by the visuals of the evening –the black and white of the orchestra, pitted against the fluctuating environment of Cage’s work, I’m in the Cage camp -satisfied with never knowing what to expect, a surprise around every corner.