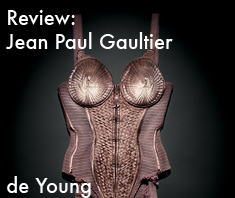 The Fashion World of Jean Paul Gaultier:
From the Sidewalk to the Catwalk.

During his remarks at the press opening, Gaultier told of his first visit to San Francisco in the early eighties, of being amazed by the full leather gear sported by segments of The City’s underground, attracted not only by the fashion aspect, but the personality of the image bearer. Throughout his career, he has continued to ponder and sympathize with those slightly oft-kilter from the mainstream, who have the personality to pull it off. 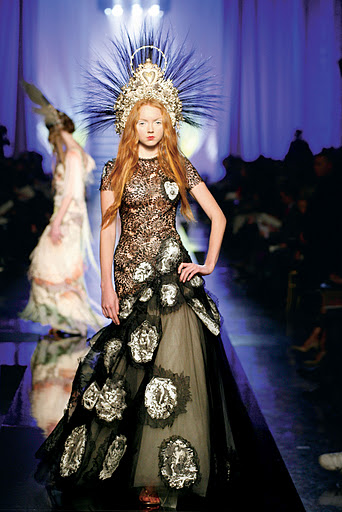 It began in grade school, when a teacher caught him sketching in class, rapped his fingers and pinned the sketch to the back of his shirt – as humiliation. Instead, the shy, sports challenged youth, gained increased respect from those of his peers who witnessed his drawing skills honed in the seclusion of home. Nurtured by a grandmother fond of corsets, he practiced haute couture on a teddy bear, which has remained a symbolic touchstone for him.

This show is sensational. Not only for the fashion but for the installation. There have been fashion shows here before (Westwood, Saint Laurent, Balenciaga), championed by late Director John Buchanan, Jr. and President Diane B. Wilsey, but this superseded all expectations of what a fashion retrospective could look like. Indeed, Gaultier went on to explain that he didn’t want a retrospective, but an lively installation that matched the creativity of the fashion.

The most striking thing about the show is the forty manikins that have faces projected on them. You won’t know whether they are real or not when you first enter. Some dozen celebrities have lent their image and voice to the projections. And there is Jean Paul himself, welcoming us to the exhibition. 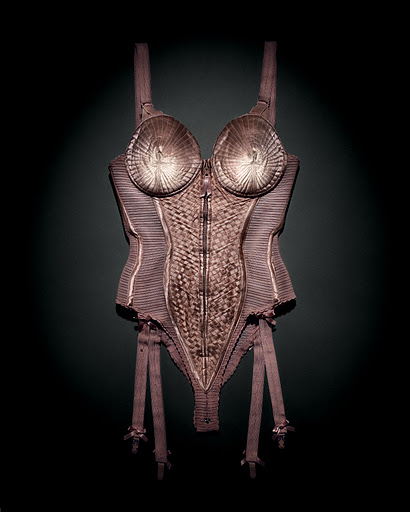 Gaultier begged off being labeled an artist at the press opening, perhaps a bit of false modesty, but it has some ring of truth to it. He is more like a journalist, methodically turning out product for the next deadline. Instead of the next story, it’s the next collection. Over time, one builds a backlog of work. Like the journalist, Gaultier listens and draws inspiration from the street, every new collection an antenna picking up on what’s current.

Nobody is more au courant than Gaultier, whether styling or creating music videos and major motion pictures, or dressing celebrities from Madonna (those cones) to Kylie Minoque. The exhibition is also supported by photographers he has worked with including Cindy Sherman, Andy Warhol, Herb Ritts, Pierre et Gilles, Stephen Maisel, David LaChapelle, and Richard Avedon.

I was prepared to dismiss this exhibition as more haute for the masses, but I came away impressed. Gaultier wanted something alive, and he got it. The installation is world class. At the press opening (boy, was it crowded), the originating curator from Montreal Museum of Fine Arts was present. The exhibition travels next to Spain.

San Francisco seems a lively space for the arts these days. Our major cultural institutions have embraced the avant-garde. The Symphony just hosted the Mavericks festival, in which Conductor Michael Tilson Thomas played a blender in a John Cage’s “Song Cycle,” behind avant-garde supergroup Meredith Monk, Jessye Norman and Joan LaBarbara. It traveled on to New York, as did the recently departed SFMOMA Francesca Woodman photography exhibition, currently on view at the Guggenheim.

Now the Gautier installation, which President Wilsey explained, seemed a bit farfetched (being a Balenciaga babe) when Buchannan first pitched it to her. But to her credit, she bit, and this show by a major avant-garde designer was given the green light. Go for the fashion. Marvel at the installation.

Next post “Everything Ever and Nothing Never” @ Needles and Pens