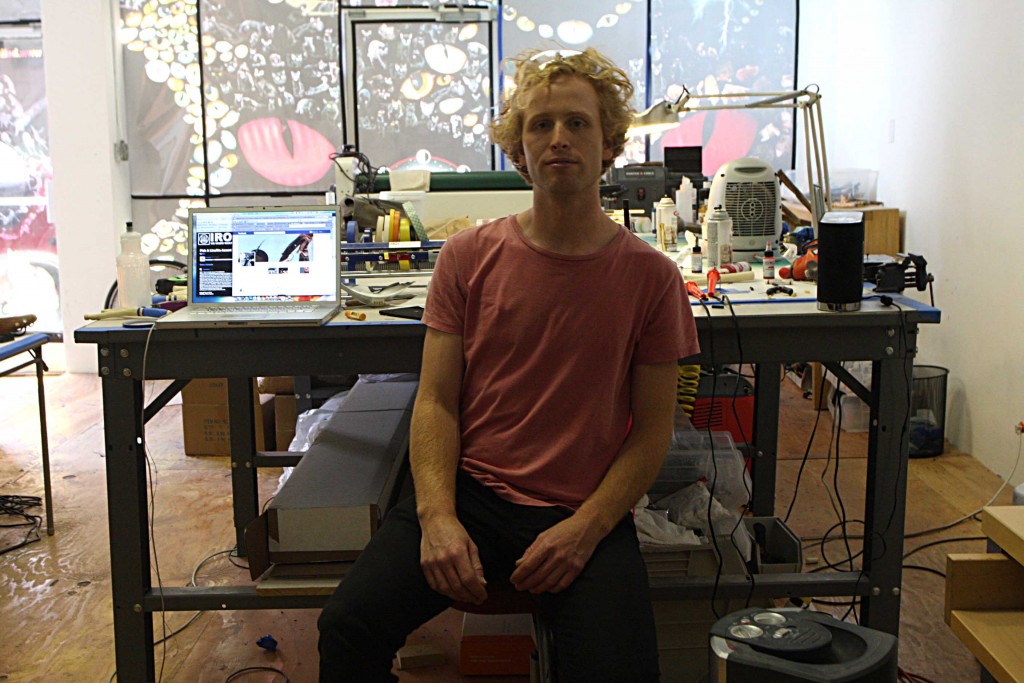 It’s 11AM on a Thursday and I’m with my friend – and ½ of the two-man collective HELLA MORE FUNNER – Adam Gray. We are currently running around the TL attempting to track down a mailman. Adam is slangin’ slingshots to make some extra cash (and yes I’m talking about Dennis the Menace’s choice weapon of mass annoyance). Adam’s slingshots are in big demand and he’s got orders to fill. Although we’re tempted to leave this particular package of on top of one of the deserted mail trucks we’ve come across – we agree to instead grab some coffee at Farm Table and stake out until we find our post man/woman. 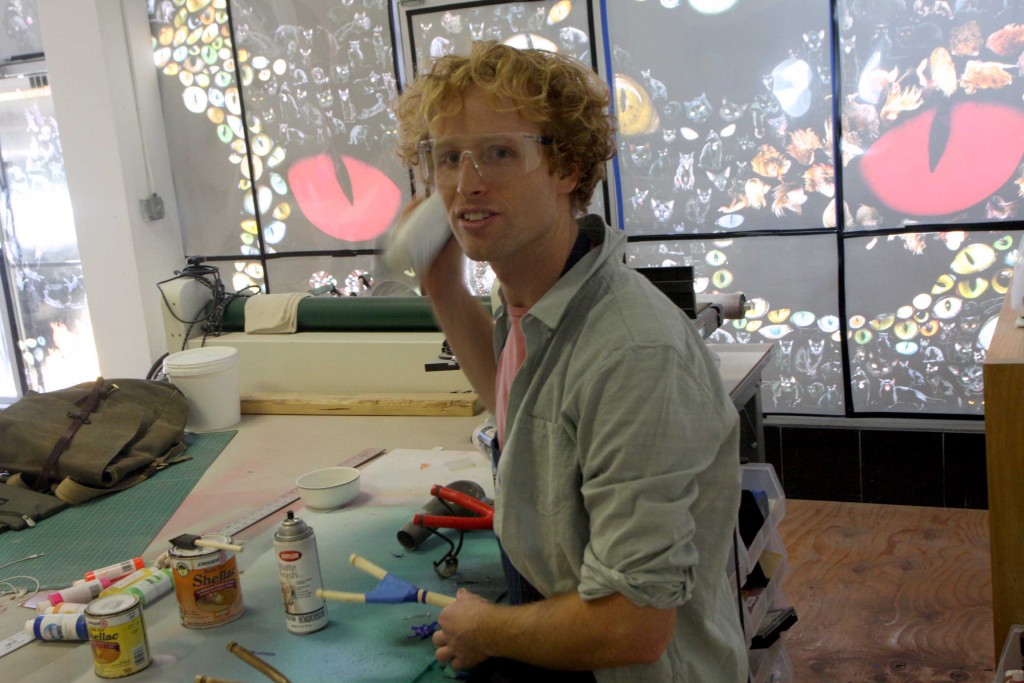 Working in the studio, Image courtesy of Nicole Greene

Between sips of coffee, talk of baseball fanatics and the architecture of parklets –we spot a postman, flag him down and accomplish our first mission of the day. Now it’s back to HELLA MORE FUNNER’s studio space on Taylor and Ellis, where Adam Gray and Sam Fuchs (obviously the other half of the collective) produce strikingly bold, large-scale collages that reference the over-stimulation of pop culture in the age of the Internet.

NG: Tell me about Sam since he’s not here to represent himself. How did you guys meet and begin HELLA MORE FUNNER?

AG: We were friends in undergrad at UCLA. He was in graphic design and I was in Art. We started this project in 2007 just before Sam graduated and moved from LA to SF. We like the work – so we collaborated over the Internet. Basically, passing the image back and forth until we were satisfied. Then, I went to RISD and we continued in the same and now I’m here, and we’re sharing this studio!

NG: So, I know you began your artistic career as a ceramicist; what was the transition from ceramics to digital media and collage?

AG: I sort skipped around and went from ceramics at UCLA to Architecture at Berkeley and then back to UCLA for an art degree – where I studied largely photo and graphic design. I worked for a few professors in the photo department and then I went to RISD for Digital Media.

NG: So tell me about any inspirational artists or art that influences HELLA MORE FUNNER?

AG: Hmm, well, if you ask me to name twenty artists that have influenced our work, I’m not sure if I really could – but if you ask me to name fifty gangster rappers, infomercial personalities and jingles, I wouldn’t shut up. I can do that forever. Not many artists have really embedded themselves inside me. I mean a lot of people have compared the work to Hieronymus Bosch and other painters along those lines. Artists that deal with the epic, all-devouring spectacle and these sorts of mythological landscapes with lots of different characters and allegorical narratives going on at all levels of the painting. So, pretty much Hieronymus Bosch is the man. We often wonder what he would do with Photoshop and Internet connection.

NG: So most of the characters in your collages are Google searched images, right? There are obviously a lot of current pop culture references in the work… Will you explain your process? 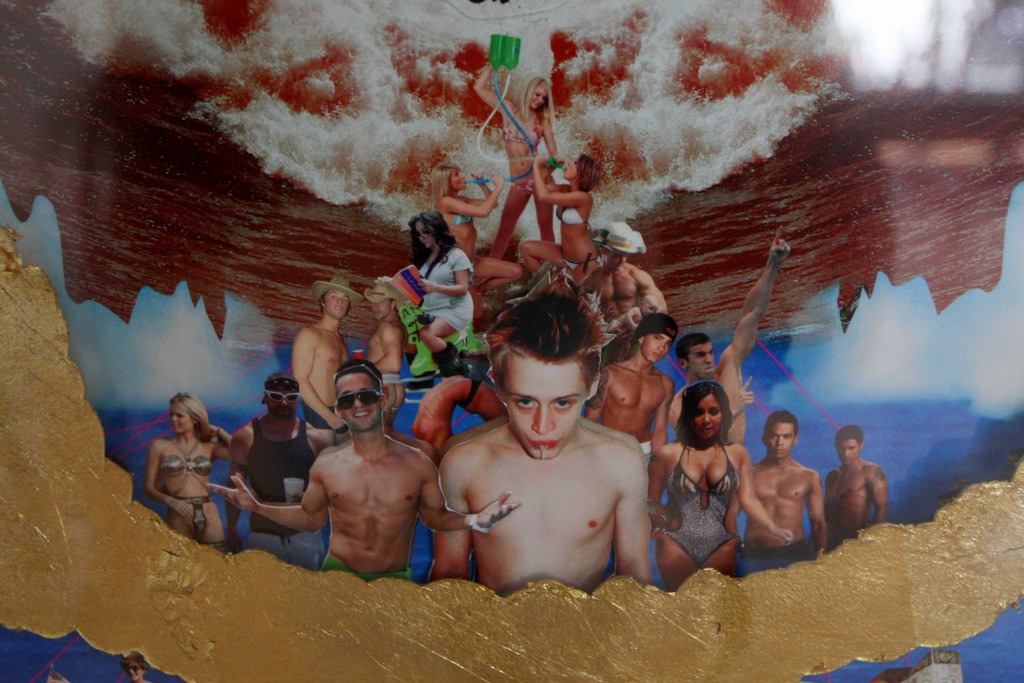 Close up of “Beachy Head” (2011), Image courtesy of Nicole Greene

AG:  We define some sort of a theme we want to do, and then we think of different sets of images that we can do within that theme, and that becomes the building blocks for the piece, and within that there’s a lot of flexibility – like the Internet. You can go on to check the weather and before you know it you’re looking at the ten weirdest snails! Our process is just as distracted as the Internet can be. We set intentions but along the way we stray. We’re not completely honest to whatever political or social agenda we might have because the Internet just pulls everything apart – its overload and we celebrate that.

NG: And you’re letting that happen because that’s part of the process. It’s letting the Internet envelop you. I know exactly what you mean. You go to check your email and then you’re on Facebook and then you’re looking at YouTube videos and reading funny/weird articles!

AG: Yeah, it’s like an hour and a half later you’re like “Wait, was I doing something?”

NG: There’s a lot to be said about that being part of the work. The Internet is a tool of distraction for so many people, whereas you’re using that to your advantage and to your benefit.

AG: Totally. We kind of imagine the state of our generation’s distraction is almost like this global epidemic. The competition for our attention is so monetized that our generation is going to have the most trouble addressing real long-term problems and life problems. We can’t get around to it.

NG: Yes. It’s like advertising and Internet and TV – every commercial’s louder then the next…

AG: The more garbage thrown at us, and the trashier it is, the higher the chances we’ll notice it. The Internet is getting down right creepy with data mining, hyper-targeted advertising, and socialized shopping. To a search advertiser, I am just a pair of eyeballs floating around, waiting to be collected and tallied. The Internet says that we are exposed to 182,000 advertising messages every year. I clicked some Google ads for credit cards about 40 times this morning. These companies may have paid Google $5 each for those valued clicks– that’s two hundred dollars! How crazy is that? So much money is being spent just to get our attention . . . did you know that the technology exists to beam advertisements directly into your brain? Well it’s more true now than ever.

NG: I know a lot of people who try to go the opposite route of you – not just in art – but in general life. Some friends are just so anti-technology, anti-social media and anti-Facebook, etc. Which can be a really difficult thing to do. So it’s interesting to see you jump into it.

AG: It’s a rocky relationship. I don’t entirely embrace it – I set limits. I split town on my bike and camp out for a couple of nights, alone or with friends. I have to deliberately pull myself away from it. At least in my life, it’s really seductive and it takes up a lot of time, and in most cases, I don’t think it brings me closer to people or myself or to my goals. But it’s there and I’m participating and I will continue to participate. The thing is, our ADD addled collages are really a cathartic project, a way of unburdening ourselves of the garbage culture we’ve collected.

NG: So you moved to this studio in the TL in the last few months. How do you feel about the area, the energy, the people, etc?

AG: The TL is a colorful place. If you’re open to weirdness, which I generally am, you will hear a lot of weird stories. You see situations that you just can’t explain. The level of human tragedy in the TL can be pretty rough to absorb before breakfast. I mean, you can make all sorts of excuses for different types of behavior, but if you saw it somewhere else in the city you might double take the situation. Maybe consider being a good samaritan.

Chatting with the locs, Image courtesy of Nicole Greene

NG: And the TL is complete over-stimulation. It’s like bombardment of crazy shit happening all around you all the time. There’s always something louder happening somewhere down the street.

AG: Yeah! Being so close to Union Square my head is always on swivel. I am often pretty torn on what to look at–like, “Oh my god the hottest girl ever! And the weirdest person ever! On the same corner” Like that guy with the cat on the dog and a rat on the cat! I don’t care why, I’m just grateful to have seen it.

NG: And “Oh my god that’s the worse smell I’ve ever smelt! And could it… Ooh it just got worse!”

NG: There’s so much going on, I feel HELLA MORE FUNNER’s art really fits in the TL. The pieces are large, graphic, in your face, colorful, diverse, and a little unhinged.

AG: There are numerous things competing to garner your attention here. Whether it’s advertisements, sounds, smells, people, or shit burning on the street.

AG: Well we’re having a show at Asterisk. It’s a group show in July; we’ll probably have two pieces in it.